COP26 pledge to do better could help limit global warming to 1.6°C but more evidence needed

Rystad Energy’s assessment of the COP26 summit consensus is that the last-minute compromises can be seen as overwhelmingly positive towards averting critical levels of global warming. Our data-driven forecasts model different climate scenarios and, up until the Glasgow Climate Pact, our research pointed to a likely outcome of 1.8°C. However, while we will not change our base case until further evidence justifies such a move, the commitments by global leaders to cut methane emissions and reduce deforestation, alongside faster than expected solar PV manufacturing capacity additions and EV penetration, could be a recipe for limiting the temperature rise to 1.6°C versus pre-industrial levels.

A coordinated global effort to cut methane emissions represents a vital step forward and offers a potential upside in the fight to reduce global warming. The long-term carbon budgets cited in the IPCC’s AR6 WG1 report, released in August, included assumptions that significant methane emissions would continue to occur after net zero is achieved. However, the combined effects of more than 100 countries pledging to cut methane emissions by at least 30%, along with expectations of further support via technology improvements in coming years, amount to added leverage in the battle against global warming and provide an additional buffer for the likelihood of a 1.6° scenario.

Another positive contribution from the COP26 summit was the commitment to stop deforestation by 141 countries that collectively represent 91% of global forest areas. Deforestation currently contributes around 5 Gt of emissions per year, or 0.1°C of global warming over a 45-year period.

“Considering all of the pledges in COP26, along with our energy demand forecasts and other factors, total emissions are poised to decline fast enough to be closer to a 1.6° scenario than before. More evidence of action is needed but it is not a stretch to say that if promises are kept the temperature rise can be limited to less than we previously anticipated. Even 1.5° is not totally out of reach,” says Rystad Energy’s chief executive officer Jarand Rystad. 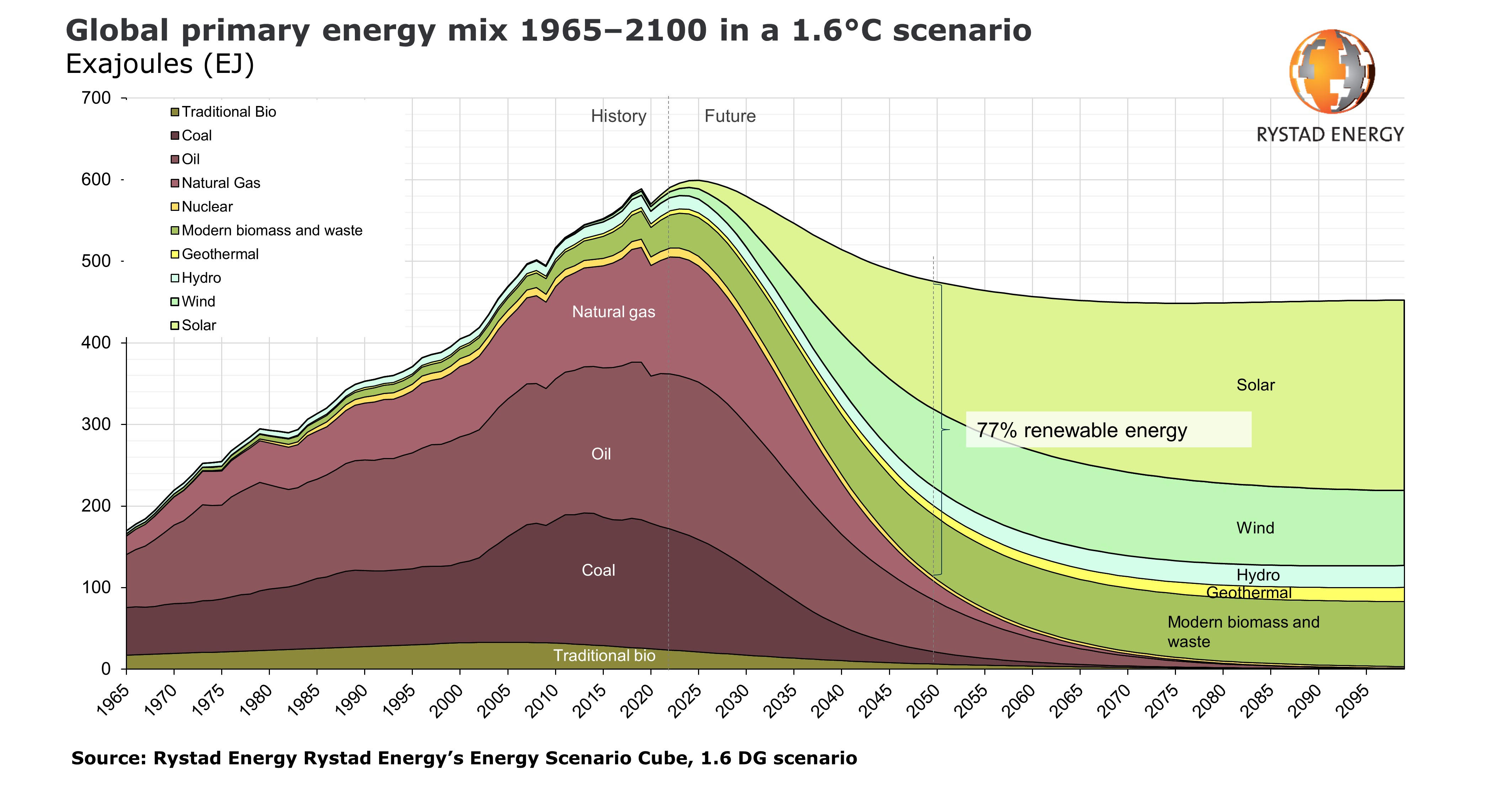 Our CEO Jarand Rystad will reflect on the outcome of COP26 in an extraordinary Rystad Energy webinar on Thursday, November 18, 2021, which will be livestreamed on LinkedIn between 13:30 and 14:00 CET.

Overall, renewable energy sources will replace fossil fuels in the energy mix, and the speed of renewable deployment will determine how fast fossil fuels can be phased out:

Hundreds of gigawatts (GW) of solar power capacity, including residential solar PV, are set to be added during this decade, with the tally on track to reach 1.2 terrawatts (TW) in the early 2030s, which is the level needed to achieve a 1.6° scenario

Yearly installation of wind turbines currently represents more than 60 GW of new capacity and could double every four years, reaching 350 GW in the early 2030s, which is needed for the 1.6° scenario

Renewable power generation is already economically competitive most places, and the COP26 agreement to phase out subsidies in support of fossil fuels will further strengthen the competitiveness of renewables and hence the speed of deployment

However, supply chain challenges and grid balancing issues could slow the deployment of many renewable energy projects and should be the focus of policy initiatives going forward.

Given the accelerated deployment of wind and solar projects, demand for power from fossil fuels will decline significantly in coming years. It is poised to fall from 85 exajoules (EJ) in 2021 to 60 EJ in 2030, and further to only 16 EJ in 2040. Furthermore, emissions related to power generation from fossil fuels will then slide from 17 gigatonnes (Gt) at present to 11.5 Gt in 2030 and 4.5 Gt in 2040.

Electricity will grow significantly and expand its market share at the expense of coal, gas and oil to become the favored energy carrier in buildings, transport and industry.

Rystad Energy also foresees a steep reduction in total direct emissions from fossil fuels that are not related to electricity generation:

Total cumulative emissions before net zero is achieved will be 660 Gt, which is consistent with the P50 for global warming reaching 1.6°, according to the IPCC’s AR6 WG1 report. A key downside to this scenario is the risk of slower deployment of renewables, potentially caused by supply chain challenges. However, there are also potential upsides, including quicker action regarding deforestation and an accelerated reduction of methane emissions in the wake of the COP26 commitments.

Rystad Energy therefore sees greater likelihood of limiting the global temperature rise to 1.6° based on the latest COP26 commitments and is looking forward to evidence of the promised change, along with the rest of the world, to move its base case scenario from 1.8° towards lower tiers in the future.