The end of Pipeline Politics?

Pipelines are the most favoured, common way of gas transportation across the world. Physical limitations to alternative ways of trading, geographical proximity, and political and economic reasons account for this.

In particular, gas can most efficiently be transported if compressed and injected into pipes, rather than converted into other states, especially over land.

Second, pipeline infrastructure is an easy way to connect broadly neighbouring states with complementary economic interests and roles, such as producer and consumer.

Third, pipeline trade creates grounds for, facilitates or reinforces patterns of cooperation and alliances, and interdependence, which if asymmetric works as a power and bargaining tool or a means to establish one’s supremacy over another. Even when alternative ways of transport, namely LNG, became available half a century ago, selling and buying gas via pipelines remained the most affordable option. The market rationale thus also pinpointed to the necessity for pipeline gas.

These notwithstanding, the politics and economics of gas, broader geopolitics and other challenges mandate a significant switch away from pipelines – and their politics – towards open, and global, rather than quasi-monopolistic regional, markets and trade, as well as towards new means of gas trade. The frustration of buyers, transit states and purchasers with pipeline-based transactions has been amply cited.

It is enough to look at EU-Russia, Russia-Ukraine and Russia-Turkey gas trade, where all sides have at different times found themselves hostage of the rigid politics that pipelines create. Of particular importance here is also the will of the weaker side to break free from dependence on the stronger and escape the political side-effects of energy agreements.

The inflexible nature of pipeline agreements, moreover, is one of the factors that make state and corporate actors reluctant to assign themselves to the task. The delays in the Sino-Russian gas deal of 2014 – now scheduled for post-2020 – to an extent come down to neither side wanting wholeheartedly to submit to fixed terms of trade for decades.

Pipeline politics peaked in the Cold-War period, a time renowned for its enviably stable order. Patterns of alliance or detente were established and pipeline agreements followed them both within the Soviet camp, as well as between Western Europe and Moscow after Willy Brandt’s Ostpolitik became the order of the day.

Today’s world, however, is markedly different, with traditional orders collapsing and immense geopolitical realignments taking shape, and patterns of enmity and amity being neither fixed nor exclusive, but fluctuating significantly depending on circumstances, issue areas and regional developments. The ex-Soviet space and the Middle East provide the best illustrations.

One should also note, nevertheless, that the same holds true, for example, for the US-China relationship that varies depending on the topic, such as the global financial crisis, Taiwan, the plight of the South China Sea, or the handling of international crises and so on. Moreover, while China and India act in unity on climate negotiations, they retain mutual geopolitical mistrust and hold diametrically opposite approaches vis-à-vis Pakistan. The Greek-Turkish array of differences, to give another example, remains unresolved, at the same time as the two countries cooperate on the handling of the refugee crisis.

The same holds true for the Beijing-Moscow axis: it finds it easy to reach a common understanding on the normative background and desirable structure of the world order, but less so on energy deals and central Asian politics. This non-polar world is no easy fix for steady partnerships, including pipeline agreements that bind the contracting sides in rigid cooperative schemes for decades. 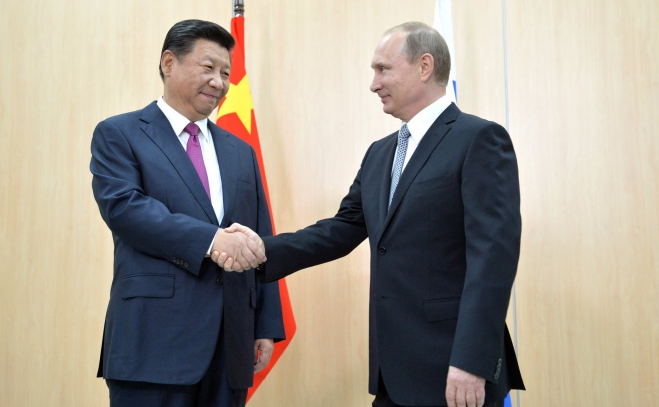 The More the Merrier

Neo-liberal economics also speak against pipeline agreements. As the EU example has triumphantly shown in the last decade, it is better to have a wide array of trade partners, and let market fundamentals define trade patterns and prices. The shift from oil-based long-term take-or-pay contracts to prices set according to gas supply and demand in competitive spot markets has significantly enhanced the EU’s gas security.

It is indicative that liberalization measures have not prompted any moves from external suppliers to reduce trade with the EU and/ or diversify markets, although they definitely prefer the previous status quo, whereby certainty of demand was guaranteed before upstream investments were undertaken.

The evolution of technology has been key to this development since it has brought LNG costs down remarkably. Compressed natural gas (CNG) is a further way to enable gas trade over relatively short distances. The critical issue here is that energy actors can further bring these costs down through increased research and development.

In other words, it cuts both ways. Not only have more options opened up for energy incumbents, be they states, corporations, brokers and so on; but they can impact on this process by prioritizing, funding and investing in technology. This virtuous cycle will reinforce globalizing trends in an expanding LNG market rendering pipelines redundant.

The last critical factor that speaks against pipeline politics and trade is climate change. The pace of transition to a low-carbon economy is pretty indeterminate in the post-Paris summit era. While gas has been heralded as the ideal transition fuel, something also enshrined in the EU’s 'gas first' policy, which emphasizes investments to secure ample gas quantities and hence prioritizes a high share of gas in the EU energy mix. In the mid-term, this will prove to be so only in the modest transition scenario. Renewables will dominate the global energy mix only after half century.

In the more optimistic and scenario, though, plummeting costs, and smart technologies and grids will make renewables the key fuel much earlier. This raises the spectre of an array of stranded assets if new pipeline investments are carried out now (or, worse, a lock-in in gas consumption that will go against climate goals).

Shorter-term investments in LNG and CNG, to the contrary, although also creating sunk costs, can be much more flexible both in terms of duration of use and reversion to other uses.

All in all, one can long for the past days of stability, which formed fertile ground for the creation of grand pipeline schemes. The death of South and Turkish Stream may have rung the death knolls for this kind of investments. The plight of Nord Stream II and the Power of Siberia pipeline will be the next crucial stress tests.

One can expect small pipelines, such as the Greece-Bulgaria Interconnector and other small, in terms both of length and capacity, pipelines to come on stream the following years in central, western and eastern Europe. But these are practically domestic pipelines, carried out within the framework of the common market and its increased interconnectivity; and there is not too much (international) politics surrounding them. In a world where access to markets, rather than to sources of energy is the key, pipelines should be thoroughly revisited.

Dr Filippos Proedrou is an Associate Research Fellow at the Institute of International Relations and an expert in energy politics and EU-Russia relations.

Azerbaijan accounts for over half of BP govt payments