Researchers in the U.S. and Australia are upbeat on the cost reduction potential of hydrogen. Unlike many of their European counterparts, they don’t discriminate against “blue” hydrogen, i.e. natural gas. Dutch research shows why this makes sense: “blue” hydrogen is likely to remain cheaper than “green” under any scenario. 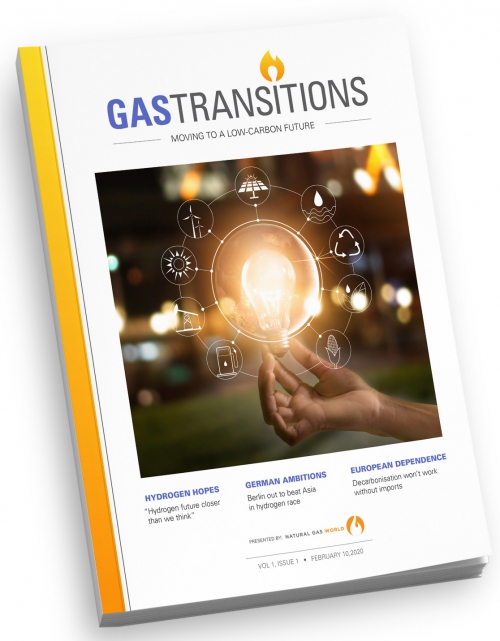 “There probably wasn’t a week in 2019 where I didn’t talk to a customer about hydrogen or decarbonization,” Jeffrey Goldmeer, director of fuels solutions at General Electric’s gas power unit, recently told Bloomberg news agency. Clearly, hopes for hydrogen are high across the world – and with the “Hydrogen Olympics” in Tokyo coming up, the hopes (or the hype?) will get higher still.

There are reasons to believe that hydrogen will become one of the pillars of the decarbonised energy system – especially if “blue” hydrogen, made from natural gas and combined with carbon capture and storage (CCS), is allowed into the mix, alongside the “green” variant, made from renewable energy with electrolysers.

Opposition to “blue” hydrogen seems to be a uniquely European phenomenon. In Germany in particular “green” lobbies oppose the use of CCS, because they say it allows for the continued use of fossil fuels, which they object to in principle. By contrast, in the US and Australia, the perspective on hydrogen seems to be more broadminded.

Just recently, on January 23, the US Department of Energy announced  $64 million in funding “to advance innovations that will build new markets for the H2@Scale initiative.” This investment “will support transformational research and development (R&D), innovative hydrogen concepts that will encourage market expansion and increase the scale of hydrogen production, storage, transport, and use,” according to the press release.

According to one “green” commentator, Tina Casey writing for Cleantechnica, this announcement more or less heralds the end of natural gas. “Renewable hydrogen in, natural gas out (eventually),” Casey cheered. She writes that “the new round of funding puts a priority on slashing the cost of electrolysers”, which, in her view, would make gas-fired power superfluous in the longer term.

But there is no evidence that the DoE favours “green” hydrogen over other technologies. On the contrary, what is striking about the H2@Scale Initiative, which is coordinated by the US Fuel Cell Technologies Office (FCTO), is its broad scope. The website of the project notes that “ten million metric tons of hydrogen are currently produced in the United States every year (95% of which is via centralized reforming of natural gas)” and adds that “other approaches include hydrogen production from water splitting, such as electrolysis, photoelectrochemical cells, or solar thermochemical systems.”

The DoE also explores the potential of producing hydrogen from nuclear power, and it focuses as much on the development of hydrogen fuel cells as on electrolysis, i.e. on the application of hydrogen as much as on its production. (For an overview of all hydrogen projects going on in the US, see here.)

Naturally, H2@Scale does have reduction of electrolysis costs as one of its goals. Researchers working under the program have concluded that the most important factor in bringing down costs is not any kind of technological breakthrough or innovations but, quite simply, scaling up production. According to a study from the US National Renewable Energy Laboratory (NREL) the system cost of a PEM (proton exchange membrane) electrolyser could be reduced from around $550/kW today to around $250/kW if production is ramped up from practically zero today to 5 GW/yr. However, according to these researchers, a further ramping up of production beyond the 5GW/yr level does not achieve significant additional cost reductions.

“The decade of hydrogen”

Unlike the US, Australia has a Hydrogen Council, which calls itself “the peak body for the hydrogen industry, with members from across the hydrogen value chain”. On January 20, the Australian Hydrogen Council published a report prepared by McKinsey, Path to Hydrogen Competitiveness, which is remarkably upbeat on the prospects of hydrogen.

“2020 marks the beginning of a new era for energy: as the potential for hydrogen to become part of our global energy system becomes a reality, we can expect fewer emissions and improved security and flexibility. This announces the decade of hydrogen,” said Benoît Potier, chairman and CEO of Air Liquide and co-chair of the Hydrogen Council, in an accompanying press release. “A clean energy future with hydrogen is closer than we think,” he added, “because the industry has been working hard on addressing key technology challenges.”

Euisun Chung, executive vice chairman of Hyundai Motor Group and co-chair of the Hydrogen Council, made similar remarks: “The Hydrogen Council believes that the report’s findings will not only increase public awareness about the potential of hydrogen to power everyday lives, but also debunk the myth that a hydrogen economy is unattainable due to cost,” he said.

Air Liquide and Hyundai are of course not the most neutral parties in the hydrogen field, which is probably why they hired McKinsey to do the research for them. McKinsey’s researchers did not disappoint them. Their report notes that “hydrogen is already surprisingly competitive as a low-carbon option.” And it will become only more so in the course of the decade. The authors looked at 40 hydrogen technologies used in 35 applications. They conclude that in 22 of the 35 use cases, the hydrogen application “will reach parity with other low-carbon alternatives by 2030”, and in 9 of these cases, hydrogen will even be competitive with “conventional” (fossil-based) alternatives (Figure 1).

Like their American counterparts, the Australian researchers found that the biggest driver of cost reduction will be scale-up. In non-transport applications, 90% of the cost reduction potential comes from scaling up the supply chain, especially the production of hydrogen, they note. In the transport sector, cost reductions will be due also to scaling up the production of vehicles. “At a manufacturing scale of 0.6 million vehicles per year, total cost of ownership (TCO) will fall by about 45% versus today,” notes the report.

Unlike their European counterparts, the Australian researchers have no hesitation embracing both “green” and “blue” hydrogen. They pragmatically note that the optimal choice depends very much on the location. “Where natural gas is cheap and CO2 storage is available, reforming and CCS offers a low-cost, at-scale source of production,” they observe. In other regions, where renewable energy is abundant, natural gas expensive, and CO2 storage options not readily available, “green” hydrogen is the better option.

The researchers project that “the optimal cost of low-carbon hydrogen from reforming plus CCS could drop below US$1.50 per kg in the short term in the most attractive geographic locations. With enough scale, costs could drop to about US$1.20 per kg in 2025 in regions like the US or the Middle East. For regions with higher average natural gas costs like Europe, low-carbon hydrogen from reforming plus CCS will cost around US$2.10 per kg in 2020, declining to approximately US$1.80 in 2030 due to the lower cost of carbon capture and carbon storage opportunities.” 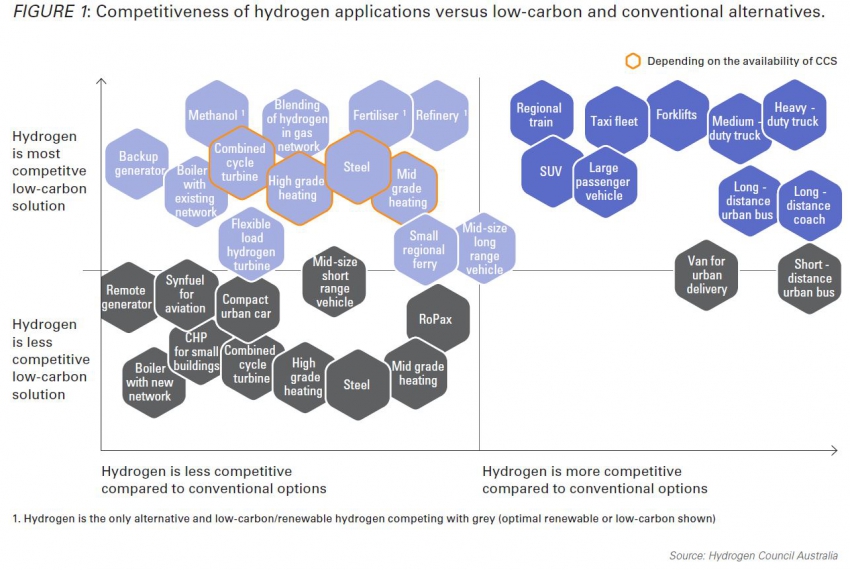 In regions with favourable renewable energy conditions, like Chile, Australia and Saudi Arabia, the production of “green” hydrogen “could become available at costs of about US$2.50 per kg by the early 2020s, declining to US$1.90 per kg in 2025 and perhaps as low as US$1.20 per kg in 2030. This is well below the average for grey hydrogen, and even close to parity with optimal grey hydrogen costs in 2030 if CO2 costs are factored in.” Currently, according to the report, production costs of renewable hydrogen are about US$6 per kg.

Achieving competitive “green” hydrogen production from electrolysis would require the deployment of 70 GW of electrolyser capacity globally by 2030, notes the report. This is about US$20 billion more than what would be required for the production of “grey” hydrogen. In addition, the refuelling and distribution networks required and the cost differential for fuel cells and hydrogen tanks would require another US$30 billion. That may seem like a lot of money, but, the researchers note, everything is relative: a country like Germany provided US$30bn in support for renewables in 2019 alone.

Meanwhile, two respected Dutch researchers, Machiel Mulder and Peter Perey of the Centre for Energy Economics Research (CEER) of the University of Groningen, recently compared production costs of “green” hydrogen recently with “blue” hydrogen and concluded unequivocally that for North Western Europe at least “blue hydrogen remains cheaper than green in all scenarios”.

What distinguishes the approach taken by Mulder and Perey from other research reports is that they have looked closely at the interactions between electricity, natural gas and hydrogen prices and how these will affect supply and demand. According to Mulder and Perey, it will be extremely difficult to produce “green” hydrogen cost-effectively, because this would require too many factors operating at the same time: “high prices for natural gas and CO2 on the one hand, not too much competition of other green electricity users plus an enormous expansion of wind and solar parks”.

The researchers observe that the demand for renewable electricity will grow strongly in the coming decades, as a result of electrification, economic growth and the growth of specific sectors requiring a lot of (renewable) electricity, such as data centres. For this reason, they argue that it is unlikely that there will be much “surplus” renewable power available, as some proponents of “green” hydrogen believe, at least in North West Europe.

The two researchers have also investigated the specific case of producing green hydrogen from offshore wind power at sea, which has the advantage that it saves costs on electricity transport. Nevertheless, in this case too “blue” hydrogen remains cheaper than “green”, even if the most expensive CCS technologies are employed and if significant cost reduction of electrolysis is taken into account.

It would seem from all of this research – in Australia, the U.S. and the Netherlands – that it would not be wise to write off “blue” hydrogen too quickly. 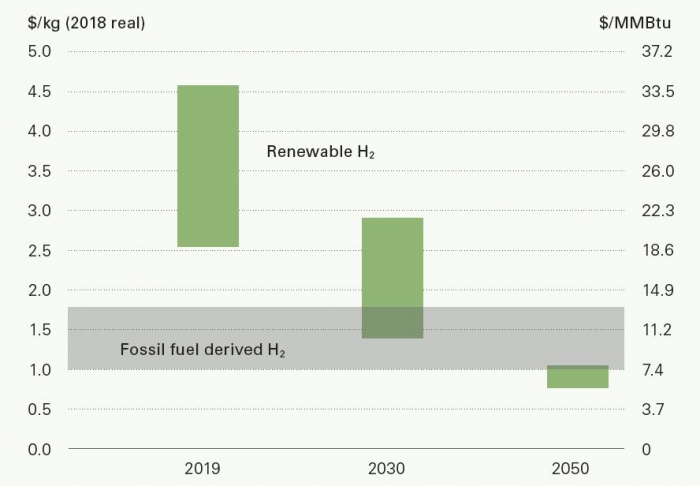 Think tank Bloomberg New Energy Finance (BNEF) produced a report  in January in which they compare the production costs of “green” hydrogen with “grey” hydrogen (based on natural gas), and concluded that green can become cheaper than grey by 2050, depending on natural gas prices, as can be seen in the accompanying chart.

The authors conclude that “burning hydrogen for electricity could work economically in some countries by 2050 if emission prices rise to $55 per ton of carbon dioxide” and if natural gas prices rise to at least $6.50 per million British thermal units.