The case for methane pyrolysis [GasTransitions]

But there is a third option: hydrogen produced through pyrolysis of natural gas or other fossil fuels. The Florence School of Regulation held an online workshop on this topic on 22 April. We spoke to three of the experts.

For the natural gas sector, methane pyrolysis could be a game-changing technology. It presents a way of making zero-carbon hydrogen from gas (as well as from coal and oil), yielding solid carbon as a by-product that can be re-used in other applications. No carbon is released to the atmosphere, hence there is no need for carbon to be stored underground.

It is not a new technology: different methane pyrolysis methods have been in use since the 1950s, said Barnes, such as the Kvaerner Carbon Black & Hydrogen technology commercialised in the 1990s. The “products” yielded by methane pyrolysis are hydrogen and carbon materials, such as molten graphite, carbon black or carbon nanotubes, which can be used in different applications.

Until recently, however, noted Barnes, there had not been much interest in the technology since there had been no great need for it. “I had not even heard of the concept until a year ago,” he said. “That’s different today. The world now needs zero-carbon fuels.” 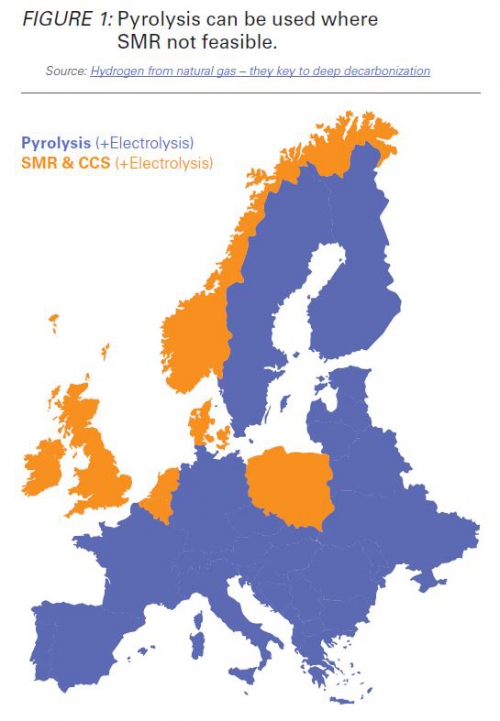 Barnes outlined the advantages methane pyrolysis has over “blue” hydrogen but also over green hydrogen. “Carbon black is easy to store and transport. There is no need to develop costly transport and storage infrastructure. There is even a potential for negative emissions if it is used with biogas. And, unlike with green hydrogen, the production process uses no water.”

Since no CCS is involved, pyrolysis can be used where steam methane reforming with CCS is not feasible, Barnes pointed out.

Moreover, the carbon black that is produced has an economic value, said Barnes. “It is already being used in tyres, dyes and inks, but new applications are being developed, such as carbon fibre and graphene, the new super-material that’s used in flexible electronics and solar cells.”

What is more, methane pyrolysis is potentially cost-competitive, said Barnes, if produced in large enough quantities. He cited research from German chemical company BASF, one of the front-runners in pyrolysis research, showing that methane pyrolysis has the potential to be cheaper than either blue or grey hydrogen:

Yet another reason to pursue methane pyrolysis, according to Barnes, is that it provides “an opportunity for European industrial leadership. This is potentially world-leading technology, and European companies are global leaders in this.”

So if methane pyrolysis is so great, why is it not used more widely already? According to Barnes, it is a matter of economics. “The process is not feasible without subsidy or higher CO2 prices. The gamechanger is the need now to reduce carbon emissions.”

However, some observers have pointed out another problem with methane pyrolysis. If it is done on a large scale, it will lead to the production of such large amounts of carbon black that the carbon will become useless. Then it will still have to be buried underground, which implies tremendous waste of resources

Barnes, however, is more optimistic. “I am convinced that if you have a lot of it, people will find new ways of using it.”

The second speaker, Stefan Petters, founder of Carbotopia, a non-profit organisation from Austria, presented a different perspective on the topic. Petters has worked on methane pyrolysis for over 20 years, he told Gas Transitions in a telephone interview after the event. He had a technology developed, Continuous Catalytic Chemical Vapour Deposition [ccCVD], which uses catalyst systems to produce not carbon black, but multi-wall carbon nanotubes.

This is a much more high-value product than carbon black, he explained. “A multi-wall nanotube is a rolled-up graphene sheet. The morphology of this product has very high electron mobility. When you are looking for good conductivity and heat transfer, that’s what one needs to look for. Also in specific surface you can’t compare it with carbon black.”

Petters is sceptical about the use of carbon black in high-grade chemical applications such as batteries and solar panels. “If you have a solid carbon lump and want to use that chemically, it’s a hell of a job to convert it. The time to market of special materials is 8-12 years. Every application is special and you need to purpose-design everything. We can’t build climate change mitigation on something that has to involve such efforts. That needs a cost-effective method to produce uniform morphology carbon with high specific surface being the best bet.” 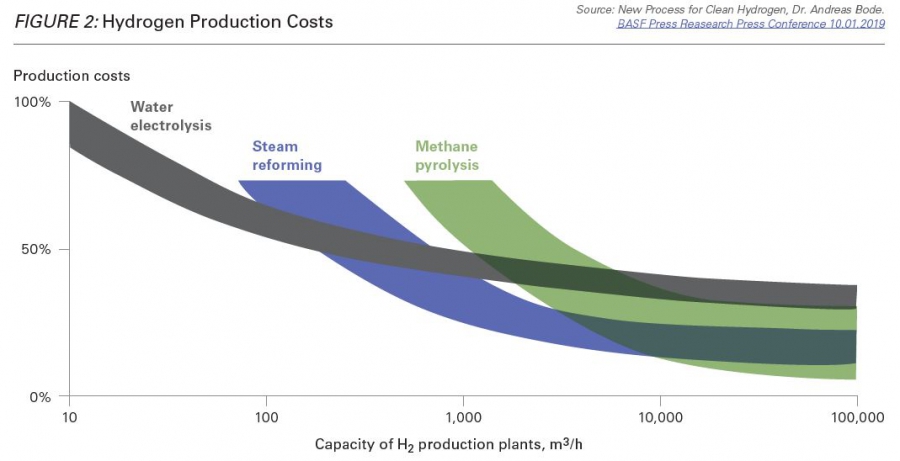 This technology was initially developed for Petters’ company, former Electrovac AG, which was taken over by financial stakeholders who did not put it to further use. The R&D team of Electrovac “rescued the technology”, says Petters, and put it in a spinoff, C-Polymers. Subsequently, Petters and a colleague, Klaus Mauthner, transferred the patent rights to Carbotopia and completed Cost-Down-Roadmap developments so it is now ready to further larger scale implementations if investors want to make it happen.

“We have carried out 6,000 hours of uninterrupted small-scale industrial production but it’ll take another 24 to 30 months engineering to take it to full-scale industrial production start-up.” Petters is convinced it can be done at a competitive cost. “In the past if you mentioned nanocarbons, people would say, oh, that’s expensive. But we have reached a point where our catalyst system costs less than 1% of a barrel crude oil average price, being the minimum commercial value per kg for pyrolysis carbon in non-combustion oil substitute applications.”

Eventually, if production is scaled, hydrogen produced through methane pyrolysis could substitute a third of all fossil fuels used in the EU, said Petters.

The third speaker, Christopher Brandon of the Swiss EH Group, an engineering company specialised in fuel cell technology, presented yet another methane pyrolysis technology. His company is working on a new approach, he said, “based on ground-breaking work at the University of Oxford”.

EH Group is developing this technology, which uses microwave-initiated catalysis, together with a team of researchers at Oxford. In the process methane is decomposed by passing it over a catalyst bed – which uses inexpensive, abundant catalysts like iron – and exposing it to microwaves. The process yields a “high value carbon materials by-product,” said Brandon, which could be any carbon material, including carbon black, needle coke, graphite and carbon nanotubes.

The technology is at TRL4 (technology-readiness level), said Brandon. They hope to be at TRL6 (demonstrated technology) in 18 months.

The main challenges for methane pyrolysis, he noted, are two-fold: “scaling up the process, and dealing with the carbon by-product, both in terms of reactor design and development of markets.”

He concluded with an optimistic note: “We believe it is possible to produce at scale distributed CO2-free H2 with high value carbon by-products by using emergent pyrolysis technologies such as ours.”

Investing in liquefied natural gas in a carbon constrained world