The carbon capture and use mirage [NGW Magazine]

In a research paper released by the King Abdullah Petroleum Studies and Research Center (Kapsarc) less than a week later, Eric Williams put forth The Energy and Resources Institute’s (TERI) high fossil fuel use scenario in support of the circular carbon economy (Figure 1) that also meets the Paris Agreement.

The TERI scenario removes 12.5 gigaton (Gt) of the 21.7 Gt of carbon dioxide equivalent (CO2e) emissions from fossil fuel consumption in 2050 using carbon capture, use and storage (CCUS). As shown in Figure 1, Williams attributed 12.3 Gt of the mitigated CO2e to storage (CCS) and just 0.2 Gt to use (CCU), the latter based on an International Energy Agency (IEA) estimate, as these technologies are in their infancy. But in the text, he also cites Anglo-Dutch major Shell’s estimate of 5.7 Gt which gives more credence to the circular carbon economy concept.

Capturing and storing CO2 to prevent its release was first suggested in 1977. However, capture technology has been used since the 1920s to remove high levels of CO2 sometimes found in natural gas streams at gas processing facilities. Its use in enhanced oil recovery did not come until the 1970s.

The three main pathways for CCU are mineral carbonation to make construction materials, and chemical and biological conversion to produce chemicals and fuels.

Mineral carbonates can be used to make concrete and cement and this sounds a significant opportunity given the lifespan of buildings and the appetite for concrete. A number of processes that use CO2 for the production of concrete and cement already exist on a limited commercial scale.

CO2 can also be transformed into carbon-containing materials such as fuels, polymers, and commodity and chemicals. But the latter tend to be dependent on low-cost, non-transportable energy resources or feedstocks, and so are not scalable.

As noted by Science Advice for Policy by European Academies (Sapea), excess intermittent renewable electricity could be transformed into chemical fuels such as hydrogen, synthetic natural gas (SNG) or synthetic liquid fuel (SLF) using CCU processes, rather than stored in batteries, allowing it to be used for both long-term storage and long-range transport.

A downside of converting CO2 into fuels – and chemicals – especially using chemical conversion processes, is it only delays the release of CO2 emissions into the atmosphere to the time the secondary product is consumed. 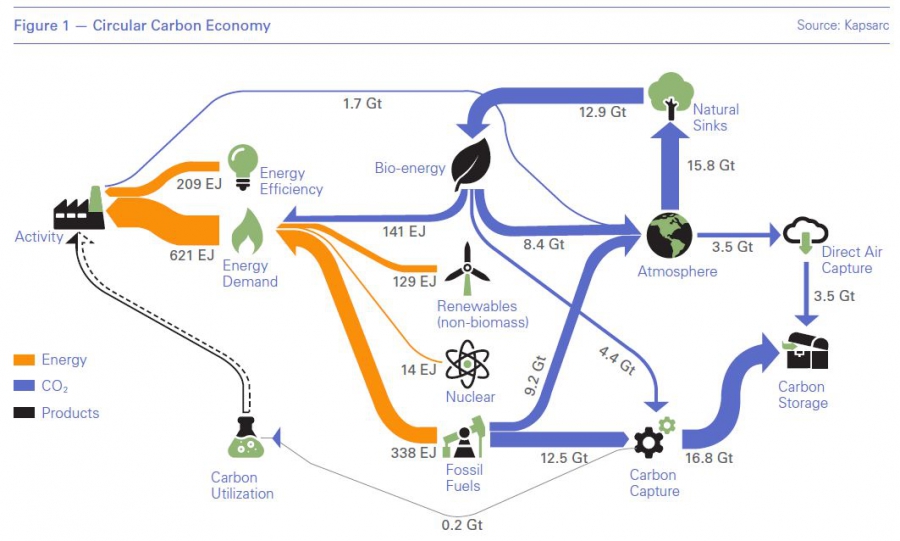 Presently, CO2 is used in beverage carbonation, greenhouses, the food industry, rubber and plastics, and to mix gases and aerosols, but its primary use remains in the synthesis of salicylic acid and urea. In 2015, the global chemical industry produced 90 kilotons of salicylic acid and 164 megatons of urea. Both are mature applications, and the CO2 used in urea synthesis is normally produced from methane steam reforming, which also produces the hydrogen required for ammonia synthesis.

CO2 is a low-energy molecule and upgrading it takes more energy than will be extracted. Converting CO2 into carbonates would need less energy but mineralisation has other issues.

The second and third issues relate to one another. Both require a significant input of energy and/or heat, contributing to a net-CO2 increase unless using hydro, solar or wind, either directly or via an energy carrier such as renewable hydrogen. Again their CO2 emissions are simply delayed to the time of final use, not actually eliminated as storage would do.

Mineral carbonation could be done on a large scale, but while a few niche products are commercially available, the technological and other barriers to wide-scale entry appear formidable owing to the incumbent materials’ unassailable position. Using mineral carbonation products instead would use up to 1 Gt/yr of CO2. Mineralisation, unlike chemical conversion, has the added benefit of providing a permanent and benign form of CO2 storage that requires no regular monitoring – unlike geological storage options.

But large-scale mineral carbonation is facing serious technological challenges. Converting CO2 into rock takes a very long time and until a catalyst is found, it is also energy and heat intensive, which is self-defeating.

In addition, conventional production processes for these products benefit from an abundance of low-cost, geographically dispersed raw materials, such as limestone and clays. Large production volumes also offer substantial economies of scale, resulting in low costs – $10/metric ton for aggregates, $50/mt for concrete and $100/mt for OPC. This throws into sharp relief the extent of the commercial challenge facing new competitors.

Moreover, the global construction industry has confidence in OPC and traditional concrete, while industry standards are not only slow to change but vary from region to region even in the same country.

Scientists have failed for decades in their attempts to use CO2 commercially as a feedstock for the synthesis of commodity chemicals and fuels. In the absence of effective catalysts, it requires significant inputs of energy and/or heat to break the molecular bonds and allow the carbon and oxygen to bond with other molecules, such as hydrogen for synthetic fuels.

The three core technical challenges for converting CO2 to commodity chemicals and fuels now are: the collection and purification of CO2 from a variety of power and industrial streams; the synthesis of “green” hydrogen from water splitting; and improved catalytic technologies. 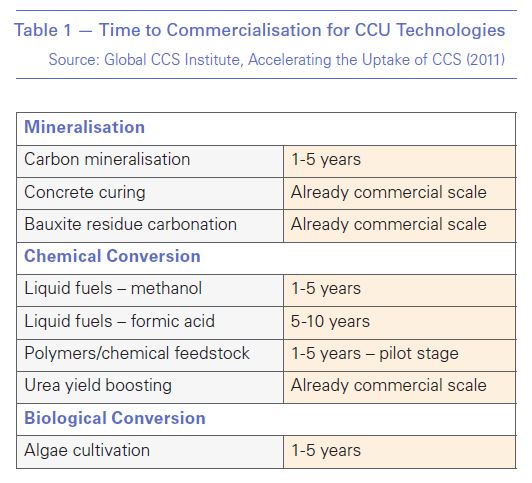 Green hydrogen is required to keep down the energy cost and carbon footprint for the synthesis of CO2 to fuels. Impure CO2 streams destroy the catalyst faster, which is an issue even with purified CO2.

Iceland, rich in low-cost hydro and geothermal energy for electrolysis, has the first semi-commercial plant to produce methanol from CO2, but it still costs two to three times more than using traditional fossil fuels.

Biological processes such as algae cultivation convert sunlight and CO2 into a wide range of value-added products, including biofuels and even dietary proteins, making them a natural fit for captured CO2. And they can use non-arable land and saline or wastewater, which would otherwise lie idle.

At the same time, biological processes have unique carbon use resource requirements, and complement mineral carbonation and chemical conversion processes. In particular, biological systems can tolerate lower CO2 concentrations and impurities common to CO2 captured from a diverse array of power and industrial plants.

But photosynthesis is inherently inefficient, as only 3%-6% of solar radiation is captured. In addition, the conversion rate of CO2 in algae cultivation is low, so cultivation ponds or bioreactors need to be as large as possible. This bumps up the amount of land and water needed, and therefore the cost.

How long we must wait for commercial CCU is therefore extremely uncertain. In 2011 the Global CCS Institute (GCCSI) gave a range of timetables based on the three conversion pathways: mineralisation, biological and chemical conversion (Table 1). None of those dates was met.

In 2014, a group led by UK-based Element Energy predicted the so-called technology development and performance (TRL) for potential CCU technologies (see Table 2). Some of the target timelines are already past, and others look too hopeful. Like nuclear fusion, CCU technologies are always ‘just’ 25 years away.

According to Sapea, “CCU is not an existing family of technologies today… This means we have no experience with any CCU process integrated into an existing energy system at scale… Breakthrough innovations are still required, particularly in the challenge of dynamical technical operation of chemical processes … Considering these factors, together with the uncertainty over regulatory and economical boundary conditions, time scales of implementing CCU measures at the level of grid-relevant demonstrations or roll-out on the system level will undoubtedly be long.”

But how long is long? Management consultancy McKinsey identified two key factors for predicting time to commercialisation of a new chemical product, and its likelihood of success:  the “degree of market familiarity” and the “degree of technology familiarity.”

The timelines and success rates for many CCU products fall between the two extremes: fuels and construction materials are meant to be substitutes in established markets – hence, high degree of market familiarity – but the technologies are unfamiliar.

However, the safest and most accurate approach for predicting timelines may be through analogy, as suggested by Sapea. An example is the gas-to-liquids (GTL) process developed by Shell, since in common with present-day CCU technologies “all unit operations were in principle known and technologically ready but never at such large scale or in such complex integrated configurations.”

Shell began intense basic research on GTL in 1972 based on early 20th century technology, and its first commercial plant began operation at Bintulu in Malaysia in 1993. And in 2011 a world-scale plant, whose economics remain commercial secrets, began operation in Qatar. So that was over 40 years of intense research and development to construct one truly world-scale GTL plant and there has been no rush to build another.

To conclude, based on the primarily technological hurdles facing CCU, the IEA estimate of 0.2 Gt in 2050 appears much more likely than Shell’s 5.7 Gt, which Saudi Arabia was using to justify its vision of a circular carbon economy.