New pipelines between Bulgaria and Serbia, Croatia and Bosnia Herzegovina, Greece and North Macedonia as well as Romania and Moldova will challenge Gazprom’s supply monopoly and could support fuel switching from coal to gas in the region.

These pipelines – which are co-financed by the EU – will enable regasified LNG from terminals in Croatia and Greece and as well as piped gas from the Caspian Sea to find its way to the western Balkans.

The 1.5bn m³/year interconnector between Romania and Moldova became operational this autumn and will break up Gazprom’s supply monopoly in Moldova. The €90mn pipeline from Ungheni to Chisinau is co-funded by the European Bank for Reconstruction & Development (EBRD) and the European Investment Bank (EIB). The pipeline may be expanded in the future. It will enable Moldova to import gas from central and eastern European hubs as well as the Trans Adriatic Pipeline (TAP) and possibly Romania’s Black Sea deposits if they are developed. 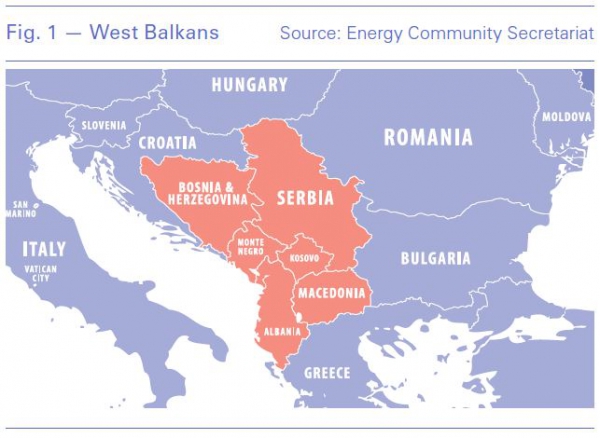 However, Russian gas supplies to Moldova – which enter the country through Ukraine – will not end soon. In November last year Moldovagaz and Gazprom agreed a new three-year supply contract for up to 12.4mn m³/day. This is enough to cover most of Moldova’s gas consumption of around 15mn m³//day. Moldova is also a strategic transit country for Russian gas via the Trans-Balkan route.

Another key project supporting the integration of the west Balkans with the EU gas market is the planned 1.8bn m³/year interconnector between Bulgaria and Serbia (IBS). It has been earmarked by the European Commission (EC) as a Project of Common Interest (PCI) and received another boost in early October after the EC announced it will grant €28m from the Connecting Europe Facility (CEF) fund to the pipeline. This supplements a €49.6m a pre-accession grant from the EC in 2017. The project could be commissioned in May 2022 at a total cost of around €85.5mn.

The IBS would enable Serbia to access Greece’s 6.9bn m³/year Revithoussa LNG terminal, via the EU-backed Interconnector Greece-Bulgaria (IGB) project which is expected to become operational later this year. Serbia would also be able to import LNG via the 5.5bn m³/year Alexandroupolis FSRU which could enter operations in 2022.

Projects receiving CEF grants must comply with third party access and other provisions of the Third Energy Package, hence the IBS can be seen as a guarantee for open market access to the Serbian gas market, the gas infrastructure expert at the EU-backed Energy Community Secretariat Adam Balogh told NGW. Nevertheless, additional developments are necessary on the Serbian market to fully use the potential of this new interconnector, Balogh said.

“The unbundling of Transportgas Srbija from Srbijagas is long overdue and must be carried out without any further delay. The Horgos-Kiskundorozsma interconnector with Hungary has restricted access – technical capacity available towards Serbia only, but there is no third-party access in practice,” he said.

The European Commission on October 6 presented an economic and investment plan for the Western Balkans which reiterated support for new gas infrastructure on the condition that EU competition rules were adhered to. The plan said a pipeline between Serbia and North Macedonia is also on the table.

“Any new pipeline in the western Balkans must fully respect EU rules, in line with the Energy Community Treaty and demonstrate its long term viability,“ it said.

The IBS could also allow Serbia to access Caspian gas if TAP is expanded to a second phase. However, as with Moldova, Serbia will not break its ties with Gazprom entirely.

The country plans to import gas from Russia from the second leg of the TurkStream pipeline via the Black Sea and Bulgaria. Moreover, Hungary wants to use Serbia as a transit route for Russian gas imports. In June this year, Hungary and Serbia signed an agreement to build a 6 bcm/year cross-border interconnector that will form a part of the TurkStream extension and that could be operational by 2021. These developments mean that Russian gas can flow to Serbia and Hungary without transiting Ukraine.

Another project to look out for is the 1.5bn m³/year interconnector between Croatia and Bosnia Herzegovina which could be a reality by 2024. The project would link with the planned 5bn m³/year Ionian Adriatic Pipeline (IAP) and give Bosnia access to gas from TAP and Croatia’s Krk LNG terminal. However, the project hinges on EU grants and sufficient interest from shippers to materialise.

Moreover, the EIB has earmarked €25mn for a gas interconnector between Greece and North Macedonia, with potential start-up in 2025.

The western Balkan region only consumes around 3bn m³/year of natural gas. And Albania, Kosovo and Montenegro have no access to gas at all – although the planned North Macedonia-Kosovo interconnector and the Fier-Vlora project connecting Albania to TAP could change that.

However, there is significant growth potential for further gasification in the region. Around 45% of power generation is from coal, but these plants are ageing and only one new coal plant – in Bosnia Herzegovina – has been built over the last 30 years, according to a recent report by the Energy Community Secretariat. The agency has stopped two recent coal plant projects over alleged breaches of state aid rules, in Kosovo and Bosnia Herzegovina respectively. That said, China’s Eksim bank is financing a new 350-MW unit at the Kostolac coal-fired plant in the same country.

Hydro power also plays a substantial role in the region – it accounts for around 43% of installed power generation capacity – and there have been efforts to increase the share of renewables. Serbia, for example, has commissioned around 300 MW of wind power.

Despite this, wind and solar account for less than 3% of installed capacity in the western Balkans. In heating, gas has a share of around 67% compared with 21% for coal.

State-owned incumbents dominate the power sector and benefit from state aid and depreciated assets. Consequently, low power prices discourage new entrants and new investments in the power sector. But Gazprom has nearly completed a gas-fired power and heat plant in Serbia, the 200-MW project in the industrial city of Pancevo. It is also planning, according to  memorandum signed last year, to double the region’s only gas storage facility: the 450mn m³ Banatski Dvor plant.

“There is indeed the possibility that natural gas demand can and will increase in the mid-term in the WB6 countries. Especially if coal generation in certain countries could at least partially be switched to natural gas, new anchor loads could appear and significantly increase the natural gas consumption, together with improving air quality and decreasing significantly CO2 emissions,” he said.

The EC investment plan said the initiative “Coal regions in transition platform in the western Balkans and Ukraine” would be launched to support projects that facilitate a switch away from coal.

“For those countries which are heavily reliant on coal key for moving away from coal in the short to medium term could be a switch to modern, low emission gas infrastructure,” said the EC. “This can offer the region a widely available, secure and affordable source of energy that will keep the region competitive on an international scale, while significantly improving air quality and lowering emissions.”

In the longer term, the new gas infrastructure should be used to transport decarbonised gases, said the EC. The secretariat is running a study to assess hydrogen potential in the west Balkans and the Ukraine.