The Conference was organized by the State Concerns “Turkmengaz”, “Turkmennebit” and State Corporation “Turkmengeology” in partnership with Turkmen Forum and UK-based GaffneyCline.

Due to international travel restrictions, the event was held in hybrid format with the arrangement of online streaming on Zoom Professional platform. 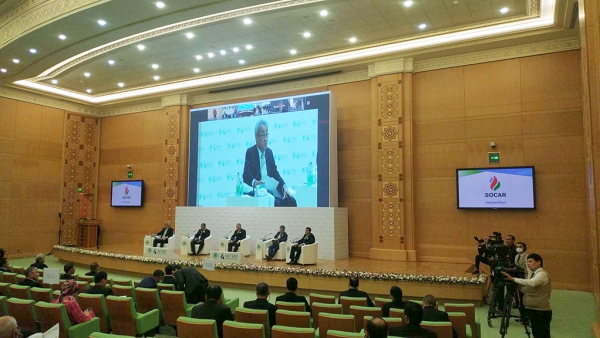 Representatives of over 150 leading oil and gas companies, relevant ministries and agencies, major international organizations and financial institutions as well as diplomats and academia attended the Conference. Over 400 participants took part in the Conference.

The plenary session of the Conference discussed the future of energy and the latest trends in the global energy markets.

Secretary General of Organization of the Petroleum Exporting Countries (OPEC), HE Mohammad Sanusi Barkindo, Hou Qijun – President of CNPC, participating in the Conference for the first time, Chairman of the Global Gas Centre (GGC) René Bautz and others presented at the event and discussed the current state and prospects of the development of the world energy markets.

When the future of global energy markets is discussed, two main concerns feature. One is climate change. The other is the question whether the world has enough energy resources to fuel continued economic growth and industrialisation.

The energy sector has undergone major transitions from the use of wood as a dominant fuel to the adoption of coal and, more recently, oil. Today, the world energy sector is entering a period of transformation, defined by the emergence of a whole range of technologies and the formation of new state priorities that can radically change the structure of energy use.

The current situation in energy markets make us rethink about the future of energy and its role in promoting sustainable development. It also demonstrates the need for uninterrupted energy transit and accelerated transition to sustainable energy sources. The much-needed transformation of our energy system is intertwined with a number of demanding challenges our society is confronted with, including global impacts of rapid urbanization, food security, land degradation, territorial conflicts reinforced by energy security concerns.

In his speech, UN Resident Coordinator in Turkmenistan Dmitriy Shlapachenko noted Turkmenistan’s active engagement in global discussions on energy security, efficiency and diversification of supplies, climate change, innovations for achieving the Sustainable Development Goals, comment the efforts of the country to promote Sustainable energy initiatives at regional and global levels.

The Conference continued with the session on onshore investment projects in Turkmenistan.

Within the framework of the Oil and Gas Industry Development Program Turkmenistan at the Turkmenbashi complex of oil refineries carried out a phased modernization of production with the participation of leading technology developers, companies and capital from Germany, USA, France, Korea, Turkey, Iran. 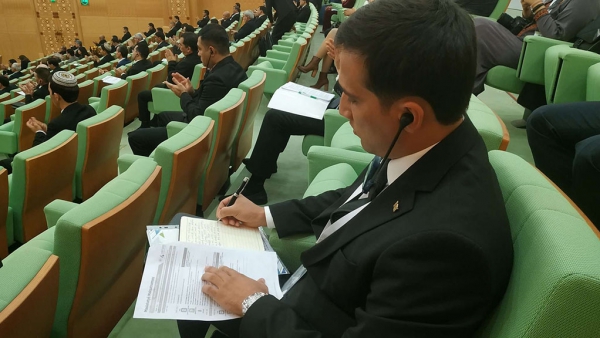 Turkmenistan is increasing production and export of natural gas. According to the country's economic results for January-August 2021, Turkmen gas exporters achieved the highest performance in the reporting period, fulfilling the plan by 133.6%. They are followed by the producers of natural and associated gas, which have fulfilled the planned targets by 122.1%.

The panelists noted that one of the perspective directions for the subsequent development of Turkmen fuel and energy complex and attracting investments is active development of deposits of the Caspian Sea. It was the key topic of the second session «Invest in Turkmenistan: overview of offshore investment projects in Turkmenistan».

In this context, director of Caspian Sea Institute Myrat Atajanov shared with prospects for the development of hydrocarbon fields in the Turkmen sector of the Caspian Sea.

On April, 2021 Malaysia's major energy company Petronas launched the GDDP-A (Garagol Deniz Drilling Platform) oil drilling platform in the Turkmen sector of the Caspian Sea, which will contribute to the further successful development of the oil and gas sector in Turkmenistan. A planned production rate the Garagol-Deniz West field is 6,700 barrels per day.

One of the largest Russian oil companies Tatneft also intend to take part in exploration in the offshore fields of the Turkmen sector of the Caspian Sea.

Dragon oil (Turkmenistan) Ltd, a subsidiary of Dubai-based Dragon oil, develops Jeitun and Jygalybek fields, which are part of the Cheleken contract territory. A large amount of work has also been carried out here to modernize the offshore oil and gas infrastructure.

Azerbaijan and Turkmenistan signed a landmark agreement on exploration and development of hydrocarbon resources of the Dostluk field in the Caspian Sea - a move that could pave the way for the transit of Turkmenistan's massive gas reserves to Europe. It also opens up the prospect of a direct gas connection. 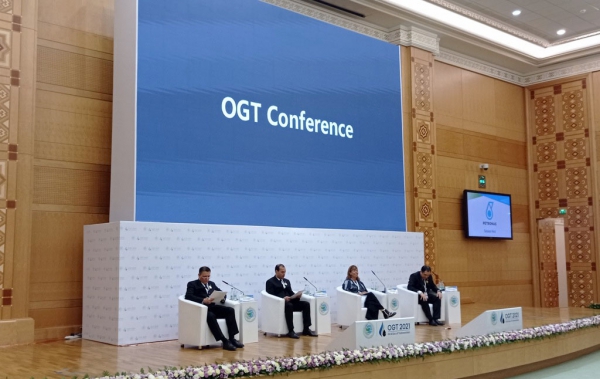 Experts from international financial institutions and bank structures discussed recent trends in the financing of investment projects during the third session. It should be noted that, for the first time the international rating agency Fitch ("Fitch") assigned Turkmenistan a long-term 'B +' rating for the first time, which indicates the stable development of the national economy of Turkmenistan.

Live link up was set up for Session 4: Natural Gas and Alternative Sources of Energy – Key Resources in Transition to a Low Carbon Future. The session was held both at the conference venue in Ashgabat and within Turkmenistan’s Dubai Expo 2020 exhibition pavilion with the attendance of the senior representatives of UAE government.

Baroness Nicholson of Winterbourne, UK Prime-Minister’s Trade Envoy in Turkmenistan, a member of the House of Lords in the UK Parliament since 1997 delivered a speech and presented UK’s vision on the further development of economic cooperation between the two countries.

From 31 October till 12 November 2021 the United Kingdom will be hosting the 2021 UN Climate Change Conference in Glasgow - a credibility test for global efforts to address climate change.

Oil and gas will remain part of the global energy mix during an extended period of low carbon transition.

In this context, CEO of TAPI Pipeline Company Limited Muhammetmyrat Amanov discussed contribution of oil and gas sector in transition to a low-carbon future in South Asian region.

The oil and gas sector will power economic recovery not just through oil and gas production, but also through facilitating the transition to a lower-carbon economy. A successful transition will require close coordination between policy, technology and capital, at the core of which is partnership between the public and private sector as well as opportunities to partner with countries around the world.

OGT International conference served as a platform for that.

Participants were informed about the steps taken by Turkmenistan in transition to a low carbon economy. Particularly, the Turkmenbashi complex of oil refineries (TKNPZ) plans to build a hydrogen production unit.

Academic Secretary of Academy of sciences of Turkmenistan Rahmanguly Esedullayev shared with scientific views and facts if hydrogen, clean and energy-sufficient can be a next-generation fuel. Using hydrogen is not new. What’s new is making use of low-carbon hydrogen mainstream.

As the Turkmen leader stated earlier, hydrogen is the fuel of the future, the production and study of which is extremely important in the light of the concern of the world community with the problems of climate change.

At a high-level Global Roundtable on Extractive Industries as an Engine of Sustainable Development, Berdimuhamedov took the initiative to start developing a Strategy for the Development of Low-Carbon Energy and an international roadmap for the development of hydrogen within the UN.

An energy revolution based on renewables and energy efficiency is needed not just to accelerate economic progress and development, but also to slash emissions that are rapidly warming our planet. The energy sector today, dominated by fossil fuels, accounts for 73 per cent of human-caused greenhouse gas emissions.

The final session of the Conference was devoted to collaboration and know-how in research and development. Director of the Centre of Technologies of Academy of sciences of Turkmenistan Durdymyrat Gadamov told about the development of an effective method for obtaining compounds for oil dehydration from industrial residues.

A number of important agreements, Memorandums and contracts were signed as a result of bilateral meetings between representatives of international organizations, oil and gas companies with the executive management of the oil and gas sector of Turkmenistan.