The move had widely been expected since the US president, Donald Trump, issued an executive order in April 2019 that asked the PHMSA to allow LNG rail transport. Critics argue that the risk of explosion is too high, but rail transport of LNG has been used in Japan since the turn of the millennium, and has been safely used in Spain as part of a multi-modal ‘pipeline’.

Transport of LNG by truck is already permitted in the US and, where approved by the Federal Railroad Administration, by rail in United Nations portable tanks. The transport of other cryogenic liquids in approved rail tank cars was also already allowed.

The president of the Railway Supply Institute, Mike O’Malley, described rail as “one of the safest and most versatile means of transporting hazardous materials.”

PHMSA worked alongside the Federal Railroad Administration on its report, which lays out a series of technical requirements for LNG rail transport. In particular, LNG must be carried in Department of Transportation (DOT) 113 specification tank cars with strengthened outer tanks of thicker carbon steel. This is designed to counter the risk that LNG could ignite, if it were exposed to air and converted back into a flammable gas. Supporters of LNG rail transport argue that it is only able to ignite when mixed with air at a specific ratio.

DOT-113 specification tank cars have been used for more than 50 years and are designed to carry cryogenic liquid, such as hydrogen, and have a double walled tank separated by a vacuum layer, and a boil off rate of less than 0.6%/day. All cryogenic packaging must be constructed from specific steel alloys that enable it to retain its strength at extremely low temperatures. The outer surface of the inner tank can consist of multiple layers of a thin reflecting material such as an aluminium foil or be made of fine grained perlite particles.

The PHMSA report said: “there will be operational controls in the form of enhanced braking requirements, remote monitoring, and route analysis, which are intended to exceed current safety requirements for other flammable cryogenic materials.” The train power supply must either be distributed or two-way end-of-train, when more than 35 LNG cars are included in a train in total, or more than 20 consecutively, to improve braking performance.

The cars are fitted with safety equipment to reduce the likelihood of boiling liquid expanding vapour explosions, otherwise known as Bleves. They have a pair of reclosing pressure relief valves (PRVs), which operate on a temporary basis to relieve inner tank pressure and bring it back to safe levels, as well as a pair of non-reclosing safety vents to discharge pressure in the PRVs.

Other safety measures include remote monitoring of pressure and location; a maximum filling density of 37.3%; and the completion of risk assessments by the relevant railways. There are no restrictions on the routes that can be used although a voluntary speed limit of 50 mph is requested.

Railway and gas industry companies had campaigned for LNG to be treated in the same way as other cryogenic liquids, such as hydrogen chloride, which have long been transported by rail. They argue that rail transport is as safe as road transport. In its 2017 petition to have restrictions lifted, the Association of American Railroads argued there had only been two accidental releases of cryogenic liquids from DOT-113 tank cars over the preceding 16 years.

However, the National Transportation Safety Board says that transporting LNG by railroad tank cars “would be detrimental to public safety”, while the move was opposed by 16 US states, which argued that any leaks from LNG transported by rail could form flammable vapour clouds.

Opponents cite safety concerns over moving flammable fuel at high speed and often reference the 2013 Lac-Megantic disaster. A 72-car freight train carrying crude oil derailed and then crashed in Quebec, partly because of problems with the brakes. It started a fire in one part of the train that triggered a Bleve in other cars, killing 47 people. In addition, more than 130 people were killed in Cleveland in 1944 when liquefied gas leaked from a storage tank into the sewage system and ignited.

The DOT ruling appears designed to help market US LNG at a time when a string of new supply projects are being developed, but global energy demand is weak as a result of the coronavirus pandemic. Trucking or railing LNG allows gas to be marketed in areas without gas grid connections.

Transferring containers between rail and road is relatively simple and no new infrastructure beyond railways is required. Associated gas is still being flared in Texas and some other parts of the south because there is insufficient pipeline capacity in some parts of the country to market it. LNG transport by rail could allow that gas to be monetised. 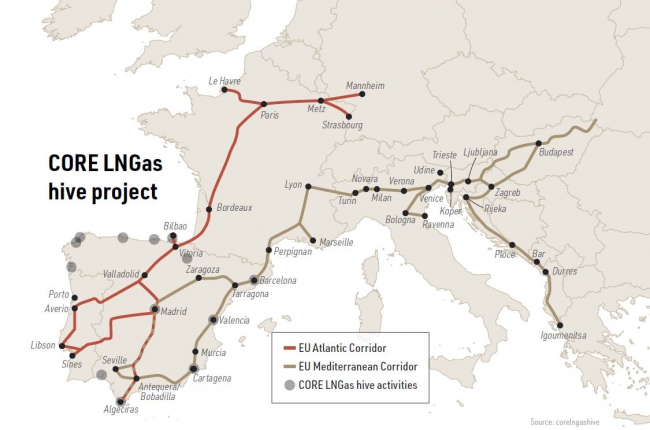 Moreover, more LNG is already being moved around North America by truck. For instance, in January, Cryopeak LNG Solutions launched its Super-B truck trailer with increased capacity. Deliveries of 18,000 gallons have already been made, including to Northwest Territories Power Corporation’s power generation facility in Inuvik, in Canada’s Northwest Territories; and to Coeur Mining’s Silvertip mine on the Yukon-British Columbia border.

Rail transport has been tried and tested elsewhere in the world. Japan Petroleum Exploration (Japex) has transported LNG between its LNG plant in Tomakomai on the island of Hokkaido to Niigata Prefecture on Honshu for 20 years. Japex, whose freight trains carry up to 40 containers, calculates that rail transport is cheaper than road over distances of more than 250 km. The company, which hopes to provide consultancy services to companies providing LNG rail services in Europe and the US, says that using trains can cut LNG distribution carbon dioxide emissions by 80%.

Trials have been carried out in other countries. For instance, in late 2018, an LNG cargo was transported by a combination of rail, road and sea from the Enagas LNG terminal in Huelva in mainland Spain to the Spanish enclave of Melilla in North Africa under the European Union’s CORE LNGas hive project to test the potential for greater LNG use in the transport sector.

The LNG was transported in an ISO container to allow it to be easily transferred between different forms of transport. In a statement, the project organisers said: “This journey highlights the efficiency of the railway as a new key logistics solution to respond competitively to the growing demand for alternative fuels. This opens up the possibility that new locations and markets access LNG.”

The trials were backed by 42 different companies and organisations, including Enagas and Setolazar, which developed the ISO container.