As of September 2019, Europe had 214 LNG fuelling stations and 3,665 compressed natural gas (CNG) stations. French haulage firm Jacky Perrenot had 550 Iveco Stralis NP trucks in 2018 and plans to increase this to 1,000 by the end of this year, while Belgium’s Jost Group aims to have 500 LNG-powered heavy goods vehicles (HGVs), also by year’s end. 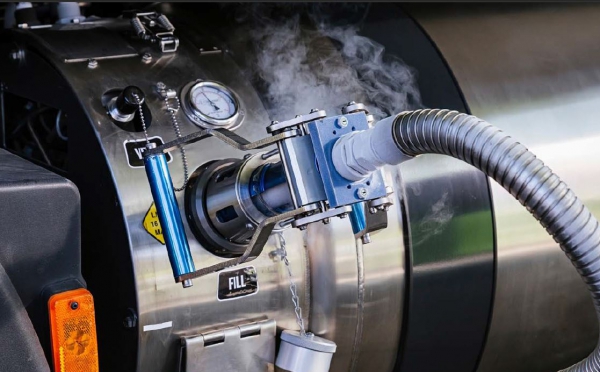 For long-distances, LNG is increasingly the preferred gas option as more LNG can be carried in the same space than CNG or biogas. However, the economics of the technology are in large part determined by taxation levels and these often reflect the environmental benefits of the fuel. Yet again, the debate over the relative importance of carbon and methane emissions is likely to prove crucial.

Retailers are developing LNG fuel stations that accommodate both LNG-engine types: spark-ignited and high pressure direct injection (HPDI). The LNG is usually transported to fuel stations by tankers, although it can be produced on site using grid gas where there is sufficient demand.

Vehicles are filled in the same way as with other fuel types, although the equipment has to be able to withstand the very low temperatures involved. The LNG is stored on vehicles in thermally-insulated storage tanks on the side of the truck.

When the engine is started, the LNG is heated to convert it back into gas. In the spark-ignited internal combustion engine, fuel is injected into the combustion chamber or intake manifold. It is then combined with air and the air and fuel mixture is ignited by the spark plug.

HPDI engines vary from spark-ignited engines in that a high pressure LNG pump located on the chassis supplies the gas to the injectors via high pressure fuel rails. On Westport’s HPDI 2.0 system, for example, the injector has a dual concentric needle design that allows natural gas and a small amount of diesel to be delivered at high pressure to the combustion chamber, with the natural gas injected at the end of the compression stroke.

Several manufacturers have developed or are in the process of developing gas-powered trucks, with fuel options ranging from LNG and CNG to biomethane.

Volvo’s new G13C engine is based on the company’s existing diesel engine, but uses a mixture of 90-95% LNG and 5-10% diesel, depending on driving conditions. Volvo says that its LNG engine produces 173.6 metric tons (mt) of CO2/year, 11% lower than the 194.5 mt/yr emitted by the diesel alternative. It says its Volvo FH LNG truck delivers a 20% reduction in carbon emissions on a truck-to-wheel basis.

Other truck makers offering models include Iveco, Scania and Mercedes. However, at least one major manufacturer, Daimler, has abandoned its LNG plans to focus on hydrogen and electric vehicles.

This would give the two parallel technologies a market share of 25% by 2030 with 10bn m3/year of natural gas supplied to European truckers as LNG by the same date, the association says.

The debate over the climate benefits of LNG versus diesel is complicated by the fact that the impact of different greenhouse gases (GHGs) on global warming varies according to the timespan analysed. Also, the emission levels of diesel engines are not static; advances in diesel emission control systems have improved the performance of diesel engines in recent years.

However, a report by the International Council on Clean Transportation (ICCT) concluded that the two fuels produce about the same level of emissions, when all GHGs are taken into account.

The ICCT argues against lower taxes and road toll exemptions for LNG-fuelled vehicles. It also calculates that LNG-powered trucks actually produce more emissions when measured over the first 20 years, although Volvo’s HPDI engines produce 9% lower emissions than diesel over 100 years. Emissions from spark-ignition engines are only 2% lower, according to the report.

Whatever their benefits in comparison with diesel-fuelled vehicles, LNG-powered trucks emit sufficient carbon to make them a hindrance rather than a help in terms of achieving national net zero carbon targets, so are likely to provide a bridging option rather than a long-term solution.

Biogas seems a more likely bet in this regard. However, it is not clear that sufficient biogas capacity can be developed, as the gas-fuelled trucking market expands, because of the limitations on feedstock.

The debate over emissions is not only important in terms of climate change, but also the economics of using LNG for trucking, as many governments levy fuel taxes based on the emissions of any particular fuel.

For example, fuel duty is 70% lower on LNG trucks in Germany than diesel vehicles and they are also exempt from road tolls. If LNG is perceived to be a lower emission fuel then taxes are likely to be lower and so the fuel a more economic option. If governments choose to levy higher taxes or remove other benefits, like lower road tolls, on LNG then the gap would close.

Estimates vary, but LNG-powered trucks are more expensive in capital terms and maintenance costs are also higher, although they should fall over time as the technology matures. Fuel costs are lower, but this benefit, as noted, hinges on levels of vehicle tax. LNG proponents argue that the benefits of lower fuel costs outweigh higher capital costs within two years.

Other benefits include lower engine noise and vibration than in traditional diesel vehicles, as reported by drivers involved in various trials. When the reduction in particulates and nitrous oxides is also taken into account, LNG looks a particularly good option for urban deliveries.

The dispute over emissions highlights the limited data available on LNG-powered trucks, but ongoing research should provide more clarity. A trial of 81 different gas-powered HGVs fuelled by LNG, CNG and biogas was launched in the UK in April under the Dedicated To Gas umbrella.

Four vehicle manufacturers will be trialled across ten different vehicle configurations, with vehicles ranging in size from 7.5 mt to 44 mt. Fuelling stations are being developed in London and Birmingham to support the project.

The trial follows an earlier one which saw three operators test 20 Euro VI vehicles fuelled by a combination of LNG and CNG in 2019. That trial reported a 17% savings in total GHG emissions in comparison with diesel.

The new trial is designed to provide more data on vehicle performance, fuel efficiency, reliability and cost, and will run until September. Those behind the project suggest that LNG and CNG offer 8% lower carbon emissions than diesel vehicles, with biogas offering a 70% well-to-wheel saving.