LNG is widely promoted as a bridging fuel in the transition from fuel oil and diesel to all-electric and hydrogen vessels, but the bridging period could well be decades given the technological advances needed to employ all-electric technology and hydrogen on long-distance routes.

Take-up for ocean-going vessels has been slowed by the lack of LNG bunkering facilities, but most of the world’s biggest ports now offer LNG and the infrastructure is being rolled out at ports more broadly, notably in northern Europe and on Europe-Asia shipping routes.

LNG is an easier option for tugs that operate from just one port or ferries that ply between two or three harbours than for large container ships or tankers that visit many different ports, but the rising number and capacity of LNG bunkering vessels is making the fuel available to a growing range of ship sizes. 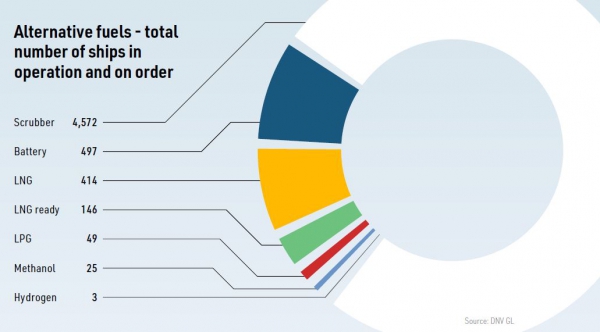 Figures vary, but should be more than 400 LNG-powered vessels by 2024, while shipping classification society DNV GL forecasts that 30% of all vessels will be fuelled by LNG by 2050.

Achieving a higher level of penetration in the global shipping fleet will require a major construction programme, and South Korean shipyards are widely expected to capture much of the growing newbuild market.

Meanwhile, Belfast’s Harland & Wolff shipyard signed a letter of intent in December for two offshore windfarm development vessels, which will be diesel-electric hybrids. An increasing number of shipyards are gaining experience in the area, so competition is increasing.

Such systems offer fuel flexibility now and in the future. They can run on diesel now if LNG is not available, while oil-LNG dual fuel vessels, particularly tankers and other bulk carriers, are also being built. Hybrid electric ships could also run on hydrogen in the future when hydrogen production and supply infrastructure become more widespread. Indeed, hybrid fuel options are becoming increasingly popular across the transport sector as a whole, including for road and rail transport, as a means of future proofing long-life investments.

Hydrogen is currently barely used as a shipping fuel and concerns over safety and fuel density are even more acute than with LNG, as it has to be stored at -260° C, an even lower temperature than LNG. As a result, on logistical grounds, LNG currently looks a better bet than hydrogen, but big projects are planned in northwest Europe that will produce hydrogen using power from offshore wind farms. Long-term hydrogen is more attractive in terms of lower greenhouse gas (GHG) emissions and Norwegian firm Norled is currently constructing the world’s first hydrogen-powered ferry.

The shipping sector is coming under increasing pressure to reduce its GHG emissions. Hybrid manufacturers claim that they produce up to 30% less carbon dioxide than their diesel counterparts, but there is a great deal of debate over the level of emissions, including methane, produced across the entire supply chain for those which use LNG as a fuel. 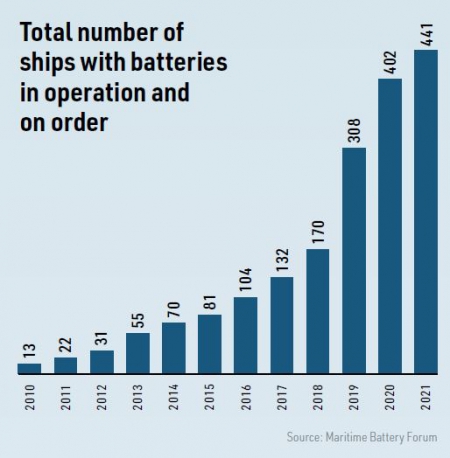 All-electric vessels offer very low emissions, if the electricity they consume is produced by renewables and all-electric ferries are already operating in Scandinavia. The technology is not yet available to allow for long journeys on all-electric ships, but it may eventually be developed. Some therefore argue that LNG can play a role in the meantime in the battle against climate change.

However, perhaps a bigger motivator in the push for LNG- fuelled ships and electric hybrids is as a solution to toxic air pollution, as the shipping sector is responsible for about 15% of global NOx and 8% of SOx emissions. The International Maritime Organisation has set up Emission Control Areas in parts of Europe and North America, where the marine oil consumed must have a maximum sulphur content of 0.1%, while a global maximum of 0.5% was introduced at the start of 2020.

LNG is seen as one of the most popular alternatives, alongside marine gas oil and low sulphur marine diesel oil, although LNG is generally considered to be cheaper on an energy basis than low sulphur diesel oil. In any case, some of the alternatives are outlawed on inland waterways and restricted straits, such as the North American Great Lakes and the English Channel, so LNG consumption is likely to increase particularly on vessels operating there. 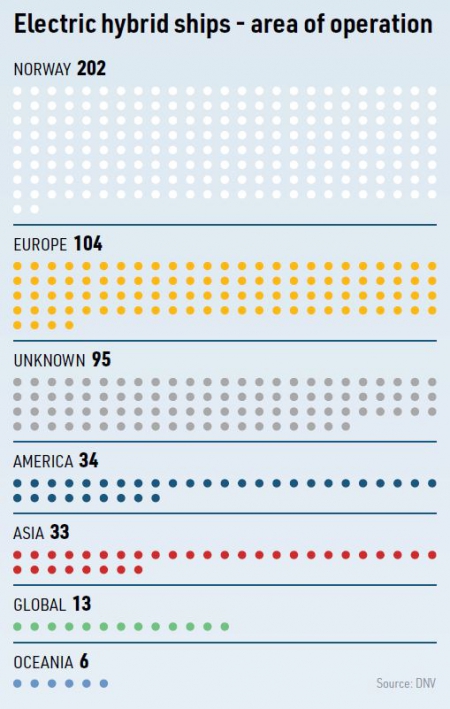 LNG-fuelled ship operators report fuel cost reductions of about 15-20%, which can allow them to recoup the capital costs, either of retrofitting or purchasing new vessels. Apart from the LNG infrastructure, there can be higher electrical costs on hybrid ships, including for inverters, advanced software and power management systems, but they also deliver increased fuel efficiency.

Hybrid engines can employ an electric motor, a fuel cell or battery, which is often more grandly called an energy storage system. Using the technology on vessels with limited journey times is particularly attractive because batteries can be recharged overnight and crews can switch between the two power sources with little effort.

Batteries are particularly useful on vessels that require repeated, sudden increases in power, such as ferries, tugs, and offshore supply and construction vessels, which operate in a more stop-start fashion. The low emissions and electric power make hybrid engines particularly attractive on coastal routes. Hybrid-powered ferries have either been ordered or are already operating on several routes in the UK, including on the west coast of Scotland and Isle of Wight, while the Port of London Authority also uses hybrid vessels.

Ships have to be fitted with cryogenic tanks and pipes, which is an easier process on newbuilds than adding tanks to existing vessels. More storage space is needed for LNG because its high heat value does not compensate for its lower energy density than oil. About four times as much storage space is needed for the same energy content of fuel. Smaller volumes of LNG can be carried but this requires more frequent bunkering.

While newbuilds can use IMO type A and B tanks or membrane tanks, type C tanks are easier to retrofit as they can be manufactured independently elsewhere for installation, rather than built into the ship.

LNG-fuelled vessels must also deal with many of the same challenges as LNG carriers. Liquefied gas requires more comprehensive safety measures than oil storage and use because of the explosive properties of gas. LNG tanks cannot be placed in as many areas of the ship as oil storage; they can be more easily damaged in an accident if they are located in vulnerable parts of the hull. Moreover, LNG evaporates in storage, so, as with LNG carriers, boil-off gas must be dealt with, often by using it as fuel.

As in many other sectors, efficiency gains are being made through the growing use of digital twins, whereby the LNG-fuelled engine, battery, power management system and software can be tested on a digital platform from the design phase through to fine tuning the set-up. As the technology matures, further cost reductions can be expected. 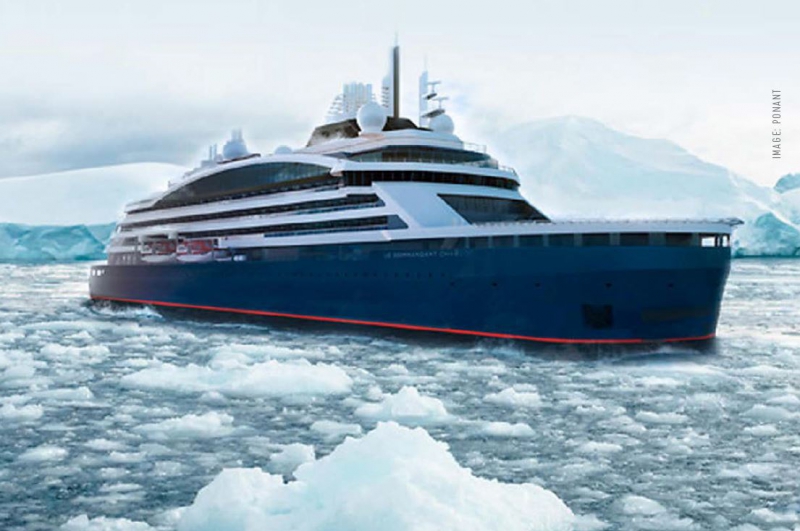