Selecting liquefaction technology is one of the biggest choices facing any LNG project developer. Air Products & Chemicals (APCI) almost entirely dominated the sector in its early years, but although the company still holds a considerable lead, it is facing a growing number of competitors as projects become increasingly varied.

Before gas can be liquefied, condensates have to be removed and impurities, such as water, sulphur, mercury and carbon dioxide, taken out in case they cause blockages. The remaining dry gas is more than 90% methane and it is usually cooled to about -161°C, methane’s boiling point. Liquefaction is achieved through a succession of refrigeration cycles using different refrigerants, but the process is complicated by the flammability of the gas. 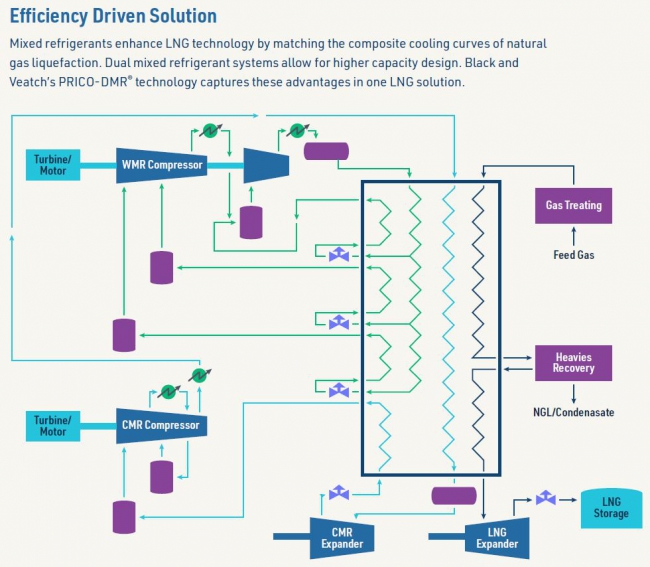 Trains generally consist of a compression process, propane condenser process, a methane area and an ethane/ethylene area. The gas is cooled by a compressed refrigerant as it passes through aluminium coils before being transferred to storage tanks. There is most variation in the different technologies in the type of heating cycles and refrigerants employed.

Developers have to make a decision on which technology to use at an early stage in project development, but the choice is often far from straightforward. Michael Scrivens, vice president and managing director of LNG export solutions for Black & Veatch’s oil and gas business, told LNG Condensed that each technology has merits based on project size and capacity, project location, and efficiency and utility requirements.

The sector is dominated by two companies: APCI and ConocoPhillips. The former’s AP-C3MR liquefaction process is the market leader and it also offers its AP-X, SP Single Mixed Refrigerant and AP Dual Mixed Refrigerant technologies among other options. ConocoPhillips focuses on one main technology, Optimized Cascade, which is the second most used option in operation today, licensed for use on 26 trains with production capacity of 106.3mn metric tons a year.

Four trains use APCI technology for every one licensed to use Cascade, according to the US Department of Energy (DoE), but this is partly a function of APCI’s early start in the industry. For capacity built after 1995, the DoE says that the ratio falls to two-to-one, still in APCI’s favour. Of the other competitors, Black & Veatch has developed more than 30 operational plants, but they generally have smaller capacities.

The AP C3MR process uses a mixed refrigerant of nitrogen, ethane/ethylene, methane and propane. The gas is cooled to about -35°C in the propane cycle, then to -90°C in the ethane/ethylene cycle and to -155°C in the methane cycle. The process employs the company’s proprietary spiral-wound heat exchanger.

DoE analysts say the technology has “high efficiency, ease of operation and reliability, with the use of readily available refrigerant streams” but warns that the use of propane as a key refrigerant requires some risk mitigation because it is highly explosive and accumulates in low-lying areas because it is heavier than air. This requires the refrigerant storage tanks to be located well away from the main plant processes.

The AP-X process builds on the AP-C3MR technology, adding an additional driver for nitrogen refrigeration compression, which provides subcooling refrigeration for the liquefaction process. The size of the spiral-wound heat exchanger is maintained, but the additional driver takes some of the subcooling strain, giving production capacity of up to 7.8mn mt/yr on a single train. Six AP-X trains on this scale have been developed in Qatar, although some sources suggest that 10mn mt/yr would be possible.

ConocoPhillips’ Optimized Cascade technology was first used by the Kenai LNG plant in 1969 and the company says the process has been licensed for use on a further 25 trains. The process is based on three multi-staged, cascaded refrigerant circuits using pure refrigerants. In a statement, the company said that it had “optimized the heat integration to closely approach the natural gas and refrigerant cooling curves, resulting in a highly efficient process.”

Optimized Cascade incorporates brazed aluminium heat exchangers and cold box modules for efficiency and use across a range of LNG train sizes. The treated gas is chilled and condensed to about -162°C in successively colder heat exchangers, using pure propane, ethane and methane as refrigerants to support heat integration because they are predictable. In order to increase plant availability, one train of heat exchangers can be served by two parallel refrigeration turbine and compressor trains. ConocoPhillips trains often have production capacity of about 5mn mt/yr, but the company believes that 6.5mn mt/yr would be possible.

Black & Veatch’s PRICO technology uses a dual mixed refrigerant to match “the composite cooling curves of natural gas liquefaction”, the company says. It argues that its technology needs a smaller plot size, requires lower capital investment and offers a simpler control system than competing technologies. Its standard PRICO technology can be used on trains with production capacity of up to 1.5mn mt/yr, but this increases to 3.5mn mt/yr with its PRICO-DMR design, which is based on EMR Technology licensed from ExxonMobil Upstream Research Company. It also markets PRICO for use on peak shaving, in vehicle fuel supply and for gas distribution systems

Rather than seeking a technological step change from one model to another over the past few years, technology licensors have continually worked to increase efficiency for their various technologies with the aim of providing increased production for similar power requirements.

They have also sought to improve safety, particularly through the use of more advanced forms of data analysis. Scrivens of Black & Veatch said: “Advancements in predictive maintenance and analyzing continuous monitoring data has increased the reliability of equipment, thereby reducing maintenance intervals of some equipment and lowering the risk to workers.”

Looking ahead, two factors look likely to drive technological change. First, there is already substantial pressure on LNG producers to reduce their greenhouse gas emissions – of both carbon and methane. Second, the growing appetite for very small-scale and floating LNG projects may yield breakthroughs in liquefaction technology that could be replicated across the wider industry.

Biden, Putin to meet in Geneva on June 16