Technology: Fast LNG is in demand [Gas in Transition]

If there is one thing that Europe needs in the light of Russia’s invasion of Ukraine, it is Fast LNG, a name coined by US company New Fortress Energy (NFE) for its rapid LNG development concept.

Fast LNG is not a response to the Ukraine crisis – NFE landed its first agreements last year -- but it may well prove a dynamic part of the solution. Europe needs alternatives to Russian gas and, according to floating LNG (FLNG) innovator, Golar LNG, there are at least 300 trillion ft3 of natural gas lying in offshore fields, 40% of which is stranded.

Gas reserves can be stranded for a variety of reasons, but offshore reserves typically lie in fields too small and/or too far from shore or a viable market to justify an onshore LNG plant or pipeline. FLNG looks like the fastest way to access these reserves and provide a near-term increase in global LNG supply. 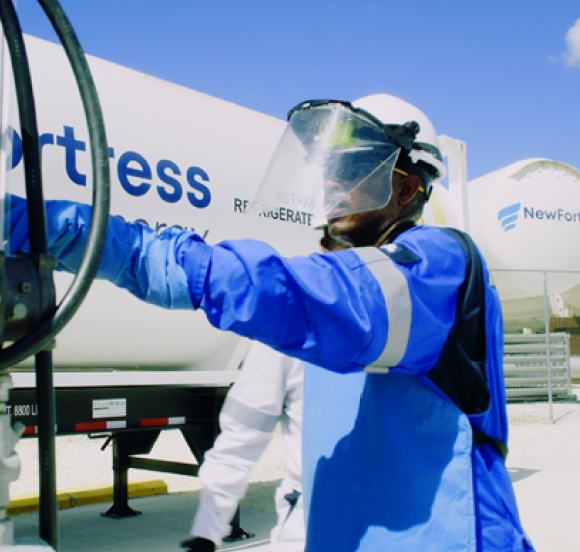 Just as Floating Storage and Regasification Units (FSRUs) cut the time in which a country can install regasification capacity, Fast LNG hopes to do the same for the supply side.

FSRUs can be in place within a couple of years and have the flexibility to be redeployed, characteristics that have paid dividends for countries in Latin America and perhaps, most notably, in the east Mediterranean for both Israel and Egypt. But, on the supply side, getting liquefaction capacity up and running takes a long time, often years of negotiation, permitting and marketing are involved before a final investment decision is taken and plant construction can even begin.

Even then onshore plants can become hostage to onshore events, delays to Mozambique’s two large liquefaction plants being a case in point, as is Yemen LNG, or until recently Egypt’s two LNG plants, Idku and Damietta. Offshore developments, by their nature, are better insulated from onshore influences.

For the FLNG sector, the initial concept was purpose built vessels, but it was quickly recognised that hull conversions offered a cheaper and faster alternative. The FLNG Hilli Episeyo was the world’s first such FLNG vessel, going into operation off Cameroon in May 2018.

The Hilli Episeyo is the result of a $1.2bn conversion of a 1975-built 125,000m3 LNG carrier, which was carried out at the Keppel shipyard in Singapore. The 294 metre vessel has LNG capacity of 2.4mn mt/yr. It also produces gas for domestic use and 5,000 b/d of condensates. So far, the facility has been operating at 50% capacity, but this is expected to rise by 200,000 tons this year and a further 400,000 tons in 2023 as development drilling increases gas supply.

Fast LNG takes a different approach, using jack-up rigs or other floating infrastructure to house midsize liquefaction trains. A floating storage unit will be moored alongside the converted rigs to provide storage and off-loading capacity to LNG carriers. NFE estimates it will be able to produce LNG for between $3-4/mn Btu and have the FLNG facility in place 20 months from a final investment decision (FID).

In May last year, NFE announced that it had bought the jack-up Maersk Guardian and that it had an agreement in place to acquire the Maersk Galant. The Maersk Guardian, now renamed the Guardian, is a harsh environment rig built in 1986 and later converted to an accommodation unit. The Maersk Galant, also harsh environment and built in 1993, has been cold-stacked at Dundee, Scotland since 2017. NFE picked up both rigs for just $31mn.

It looks like a good deal. The jack-up market has been weak, owing to a pandemic-related drop in demand, following the collapse of oil prices in 2020. Drilling contractors have been shedding old units to tighten the market, which started to show signs of recovery in fourth-quarter 2021, when global utilisation reached 84% in the jack-up segment.

With oil prices now surging above $100/b in the wake of Russia’s invasion of Ukraine, demand may well strengthen further, reducing contractors’ desire to retire or sell existing units.

NFE has also bought into the Hilli Episeyo via its acquisition last year of two business units from Golar LNG, the Hygo Energy Transition joint venture (Golar LNG Ltd and Stonepeak Infrastructure Partners) and Golar LNG Partners. The latter acquisition included seven FSRUs and six LNG carriers as well as 50% in trains 1 and 2 of the Hilli Episeyo.

NFE took a final investment decision (FID) on its first Fast LNG facility in March 2021, issuing notices to proceed to three equipment and construction partners, Fluor Corp., Chart Industries and Baker Hughes. At the time, NFE said the unit would be complete by the end of 2022.

According to Chart, its share of the deal amounts to $47mn and includes its patented ISPMR process technology, brazed aluminium heat exchangers, cold boxes, heavy hydrocarbon removal system and air-cooled heat exchangers, alongside other equipment and engineering services. 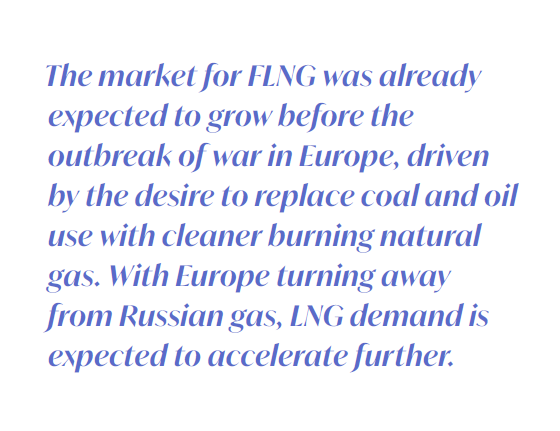 In December, NFE reached a memorandum of understanding with the government of Mauritania to establish an energy hub, focussed on gas-to-power, LNG and blue ammonia production using gas from existing offshore gas reserves. A Fast LNG facility will be the centrepiece of the project, providing gas for the 180 MW Somolec power plant and a proposed 120 MW Combined Cycle Gas Turbine, as well as producing LNG for export.

Then, in February this year, NFE announced, in partnership with Italy’s Eni, that it had signed a heads of agreement (HoA) to deploy its first unit off the coast of the Republic of Congo (Brazzaville). The facility will have a capacity of 1.4mn mt/yr LNG. Pending successful completion of the deal, production is slated to start up in second-quarter 2023. NFE also said that it was in advanced discussions for the deployment of its technology in several other markets around the world, including the US offshore.

The market for FLNG was already expected to grow before the outbreak of war in Europe, driven by the desire to replace coal and oil use with cleaner burning natural gas. With Europe turning away from Russian gas, LNG demand is expected to accelerate further.

FLNG’s lower capital cost and the emergence of companies willing to take on the speculative risk of building both FLNG and FSRUs for charter allows small and mid-scale energy companies to enter the market more easily. In addition to the relatively quick speed of deployment, the FLNG market thus looks well placed to attract new players.

According to a market analysis conducted in August last year by Visiongain, the global FLNG market was valued at $14.2bn in 2020 and was forecast to grow at a compound annual growth rate of 20.1% in the period to 2031 to reach $104.3bn.

There are big differences between FLNG concepts. Near-shore FLNG, for example, does not need the deep water mooring turret or motion control, such as dynamic positioning, that open-sea vessels require. They are also often designed to liquefy gas produced onshore, which has already been processed, further reducing the need for equipment on the FLNG platform.

However, in today’s conflict-dominated environment the model employed by BP for its Greater Tortue Ahemyin LNG project – phase 1 FLNG moving to onshore liquefaction in later stages – may be employed by others to accelerate early LNG flows and mitigate risk.

Others may follow the lead of the proposed Delfin FLNG project which envisages modular development of up to six FLNG vessels moored in the Gulf of Mexico, which would liquefy onshore gas produced from the US’s prolific shale basins.

NFE’s African projects appear to fall in the middle, sourcing and processing offshore gas in relatively shallow waters. The Maersk Galant and the Guardian have water depth ratings of 375ft and 350ft respectively. This limits the sites from which gas can be recovered, but there are plenty of suitable stranded prospects around the world. If NFE can successfully get these first two projects in place in the next two years, they should find a market replete with willing buyers.