LNG is starting to become an attractive fuel for railway locomotives because of concerns over the air pollution and carbon emissions produced by diesel. Rail systems that have not had their lines electrified continue to rely on diesel as their principal fuel, but pollution standards are steadily becoming more stringent around the world. At the same time, LNG is becoming more readily available for non-power sector distribution.

LNG locomotives are fuelled from a tender connected to the locomotive that contains the cryogenic tank and the equipment needed to regasify the LNG. A tender is a wagon that stores fuel at the rear of a locomotive. They were often used in the past to store coal for steam trains.

The cryogenic tank comprises an outer carbon steel shell over an inner stainless steel or aluminium inner tank with the two separated by a layer of thermal insulation and a vacuum. The entire tank is typically protected against rollover by a rigid steel frame, while the pipe work is protected by valves that detect damage and close automatically to prevent leakage. Gas is supplied to the engines via liquid pump, liquid pressure or gas pressure.

Developers are opting for dual fuel technology because LNG does not ignite under compression and would require a spark at the cylinder, which would require more comprehensive modification. Retaining diesel storage and capability also allows locomotives to use solely diesel in the event of a lack of LNG. It generally takes longer to refuel with LNG, although it lasts longer than diesel per volume.

The correct refuelling strategy needs to be adopted to allow LNG and diesel to be refuelled at the same time. When empty, an ISO tank can be replaced with a full tank that can be transported to the required location by truck, if there is no convenient LNG refuelling station. 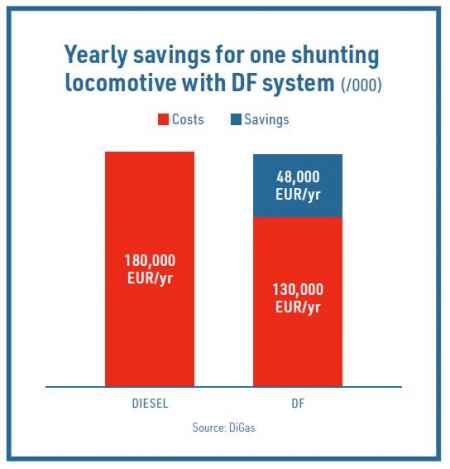 LNG produces far lower nitrogen oxide emissions than diesel, plus virtually no sulphur oxide and particulate matter, according to those developing and utilising the technology.

Most effort has focused on replacing diesel engines rather than electric locomotives, as the latter can emit less carbon anyway, depending to the power generation technology employed.

According to EU figures, the average cost of a dual fuel LNG-diesel retrofit is €500,000 ($593,000), but this can be reduced greatly as the number of retrofits increases.

There is also some cost in terms of storing LNG fuel, but relatively few depots are required because trains travel between fixed points, unlike with road haulage. The EU estimates that the payback time for shunters is four years and just two years for main line locomotives.

Safety concerns over transporting cryogenic equipment and cargo at high speeds are widely cited as the main concerns surrounding the technology.

However, Chart Industries, a US firm that designs cryogenic tanks for LNG locomotives, said: “The tender is far stronger than a traditional well car and has been extensively computer modelled to simulate worst case scenarios for derailment, puncture and impact. It will withstand side-impact from a tractor-trailer without damage and the under-carriage has no openings where track debris or other projectiles could rupture the tank, even in the event of a derailment.”

Florida East Coast Railway used Chart Industries’ cryogenic tanks when it converted its 24 locomotives to run on LNG in 2017, making them US Environmental Protection Agency (EPA) Tier 3 compliant. They were retrofitted with GE’s NextFuel technology to run on a ratio of 80% LNG to 20% diesel. Each locomotive can run at up to 60 miles per hour for 900 miles and Chart Industries calculates that substituting diesel for LNG can cut direct fuel costs by up to 50%, higher than most other estimates.

Innovation in the Baltic states

Latvian firm DiGas has formed a cooperation agreement with Estonian state-owned international logistics and transportation company Operail to test dual fuel technology on commercial freight operations. The joint venture has tested the technology on retrofitted shunting locomotives, averaging a mixture of 69% LNG and 31% diesel “without any changes in power, torque or temperature parameters of an engine” during trials. In addition, the test demonstrated that LNG can be used at any throttle notch – or stage of locomotive operation.

The engine used in the trial was a General Electric C36 diesel locomotive, which had its 17,000-litre fuel tank divided in two, with half each allocated for diesel and LNG storage, plus intelligent gas systems.

In a statement, DiGas said: “The engine management system of such an LNG locomotive provides extensive information on locomotive and its engine operations and fuel consumption that will allow further savings and provide an ability to predict more precisely major repairs and maintenance.”

According to DiGas, using LNG as a locomotive feedstock emits 20% less carbon dioxide and 70% less sulphur dioxide, while reducing fuel costs by 30%.

Trials are underway on freight services in the Baltic states by the end of this year.

Operail aims to convert all of its freight locomotives to run on LNG if successful, while DiGas hopes to start mass production of its dual fuel system for rail companies across Central and Eastern Europe.

The project has been partly funded by the EU’s Horizon 2020 research and innovation programme. DiGas has applied for a patent for its power control system, which regulates the ratios of gas, liquid fuel and air used in locomotives.

EU Cordis, the EU’s Community Research and Development Information Service, describes the technology as a “low-cost, scalable, installable at minimum cost and lead time dual fuel system”. It also reports that the technology can be used for either LNG or CNG.

DiGas says that its technology uses readily available mass-produced components, making the process cheaper, although the core proprietary technology “is based on self-adaptive algorithms, pre-calculated models and real-time comparative analysis to dynamically changeable current state operation model”. Certification of the technology in one EU member country should make it marketable in other member states.

Other companies using LNG locomotives include Indian Railways, Hitachi Rail and Gazpromtrans. A forecast 30-40% saving in fuel costs persuaded Gazprom to commission the retrofitting of locomotives, while the company’s position as one of the world’s biggest gas producers gives it a vested interest in promoting new forms of gas consumption.

LNG locomotives seem a good fit for the gas giant as it is ramping up its own LNG production and operates in a country in which rail transport plays a huge role.