Long-distance road haulage faces significant challenges when it comes to batteries. The key problem is the size and weight of the batteries required to deliver sufficient range. The large size leaves insufficient space and capacity for cargo haulage to be profitable, while recharging infrastructure remains limited.

In contrast, the low cryogenic temperature at which LNG is stored means it has sufficient energy density to deliver long driving ranges – up to 1,600 km. 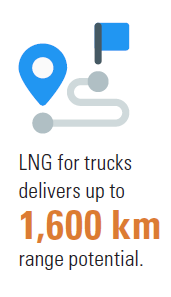 Compressed natural gas (CNG) appears the best option for passenger autos running on gas, and is generally favoured for city distribution trucks, refuse collection and for urban and suburban buses (where electrification is also an option), but when it comes to regional and international transport, LNG is a mass-scale, alternative fuel deployable today.

Europe saw a 60% jump in the number of LNG refuelling stations in 2020 from 250 to 400. This reflects the growing number of natural gas-fuelled vehicles, particularly CNG and LNG-fuelled trucks; 6,802 new gas-powered truck registrations were made last year, according to industry association NGVA Europe.

LNG engines are internal combustion engines (ICEs) based on existing designs for diesel and gasoline engines.

Diesel ICEs produce particulate matter (PM), a major contributor to local air pollution. This is the result of diffusion combustion, where the oxidizer and the fuel are separated before being burnt, which tends to lead to incomplete combustion and the production of soot.

Diesel ICEs also produce NOx because they are lean burn – i.e. the diesel is burnt with an excess amount of air and, as nitrogen is the main component of air, NOx production tends to be higher than for a rich burn engine.

Both NOx and PM are treated post-combustion in the exhaust system, but because this after-treatment is imperfect, there is usually a trade-off between the level of NOx and PM emitted into the environment.

LNG, even if injected as a liquid, vaporises quickly and mixes with air to provide much more complete combustion. PM emissions are negligible. This has an important knock-on effect because, as there is no trade-off between PM and NOx, the combustion and after-treatment processes can be optimised to reduce NOx emissions.

LNG is difficult to use alone in a compression ignition engine because it has a low cetane value. The cetane value represents ignition delay, or the time between the start of injection and the increase in pressure in the engine cylinder.

This is why a small amount of pilot fuel – diesel – is used to create first phase combustion in a compression ignition LNG engine, which provides a rapid build-up of pressure, sufficient to allow second phase ignition of the LNG/air mix.

While LNG has a low cetane value, it has a high octane value, which reduces pre-ignition or ‘knocking’. Pre-ignition usually results in incomplete combustion and therefore PM emissions. As a result, the only PM emissions from dual fuel compression ignition LNG engines result from the small amount of pilot fuel used.

Diesel compression ignition engines have gone through multiple stages of innovation and development to improve efficiency and reduce emissions, the two most important developments being turbocharging and the shift from single injection points to multiple injection points. Although LNG use presents new challenges, both innovations can be applied to LNG compression ignition dual fuel engines, promising increased efficiency and lower emissions in the future.

According to LNG truck manufacturers, such as Sweden’s Scania, CO2 emissions reductions from LNG engines can reach up to 20%, compared with diesel engines, operating in optimal conditions. But studies, for example the Sustainable Gas Institute’s Can Natural Gas reduce emissions from transport? show that real-life GHG reductions are lower, depending on the specific engine type, mode of operation and level of methane slip.

Methane slip is an area which has improved significantly since the first LNG engines came on to the market and some older GHG emissions studies for road transport do not reflect the performance of modern engine designs. Methane slip, like diesel’s PM emissions, is the product of incomplete combustion, leading to some methane escaping through the exhaust system.

Methane is a considerably more potent GHG than CO2, particularly if its effect is measured over a 20-year as oppose to 100-year period.

Marine engine manufacturer and developer Wärtsilä notes that it has cut methane slip from its dual fuel engines by 85% since 1993. It says there are a range of ways in which methane slip can be further reduced, mainly by focusing on engine designs which result in faster and more complete combustion. Wärtsilä believes its next combustion concept will reduce methane slip by more than 50% to around 1 gram per kWh. The first LNG engines had methane slip of about 16 g/kWh.

However, LNG engines’ GHG reductions see a step change when combined with biomethane liquefied to form bio-LNG, also known as liquid biomethane. This can be used in the same engines and with the same infrastructure without new modifications.

Using 100% bio-LNG can result in CO2 emission reductions of up to 90%, compared with diesel, according to Scania, but a more likely prospect is for the share of bio-LNG in road transport fuel to rise gradually, to allow sufficient time for an expansion in biomethane production.

For dual fuel engines, there are also options for replacing the pilot diesel fuel, for example with hydrogenated vegetable oil or biodiesel (Fatty Acid Methyl Ester).

NGVA Europe says that more than 25% of gas refuelling stations in Europe are already providing biomethane and that its use amounts to 17% of all gas used as transport fuel in the region. As the number of CNG and LNG vehicles rises, it may prove difficult to sustain or increase this percentage even if the absolute volume of biomethane rises. Nonetheless, NGVA Europe forecasts that by the end of the decade, there will be about 10,000 CNG and 2,000 LNG stations in Europe, and that the proportion of biomethane will have risen to an average 40%.