China’s threatened disruption of Taiwanese energy supply as part of its response to US house speaker Nancy Pelosi’s visit in August has again highlighted the island’s extreme dependence on energy imports in general and LNG imports in particular. Taiwan produces minuscule amounts of natural gas and no other fossil fuels. In 2001, about 12% of the island’s natural gas was domestically produced, a figure which last year had dropped to just 0.4%. 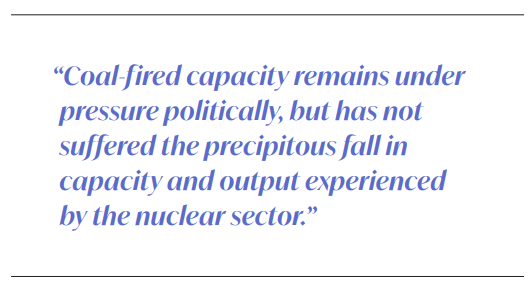 That has meant an increasing reliance on imported gas, which, since no international gas pipelines serve the island, means LNG. Taiwan was the fifth largest importer of LNG after China, Japan, South Korea and India in 2021, according to the latest edition of the BP Statistical Review of World Energy. The 26.8bn m3 it imported accounted for just over 5% of global LNG trade, much the same percentage as in 2011, despite substantial market growth over the last decade.

Most of the gas is used for electricity generation; the power sector has consumed 75-80% of gas supplies almost every year since the mid-2000s. The industrial sector accounts for a further 10-15%, with relatively small amounts of gas used in the residential and service sectors, according to data from the Bureau of Energy of the Ministry of Economic Affairs (MOEA).

In the 2000s, gas for power was primarily used for shoulder and peak load, with coal and nuclear power regarded as the twin mainstays of baseload generation. However, gas’ share of total power production rose from 10% in 2001 to 25% in 2011 and 37% in 2021. Last year, 108.3 TWh was generated from 19,216 MW of gas-fired plants, including facilities owned by state utility Taipower, independent power producers and automakers.

The increase in gas use occurred as coal and nuclear generation faced increasing environmental and political opposition. Those pressures came to a head in January 2016 when the incoming Democratic Progressive Party government said that, by 2025, all nuclear reactors must close and coal should contribute only 30% of total power generation. 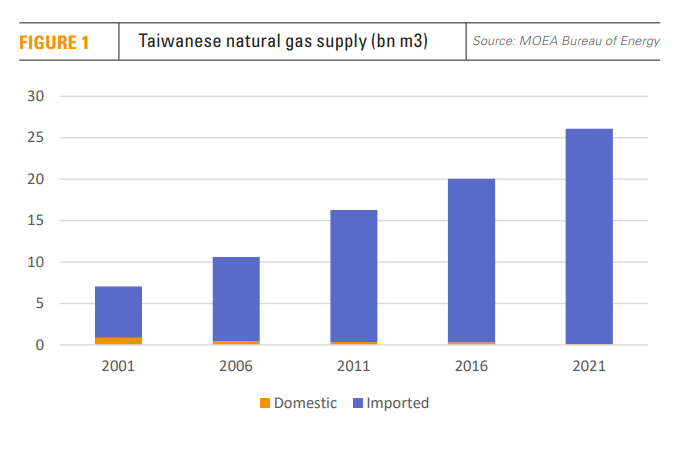 With renewable energy projected to supply about 20% of electricity output in 2025 -- based on an ambitious investment programme encompassing 5.5 GW of offshore wind and 20 GW of solar power -- gas-fired generators would have to meet the remaining 50% of demand.

In mid-2021, the Bureau of Energy forecast that demand would grow by 2.5%/year to 2027, based on continued strong industrial sector requirements, which account for well over half of total electricity demand. The projected growth rate implies that power generation could exceed 320 TWh in 2025, with gas-fired generators required to produce over 160 TWh that year, compared with 108.3 TWh in 2021.

LNG demand will also depend on whether the government’s policies regarding the various other fuels are implemented. In the case of nuclear, this currently seems likely.

The closure of three reactors in recent years means operable capacity has fallen from 5,144 MW in 2016 to 2,859 MW, with only the Kuosheng-2 and Maanshan-1 and 2 reactors remaining. The closure of these plants is still officially targeted by 2025, while hopes that any new nuclear capacity will be built were dealt a seemingly fatal blow by a referendum in December 2021. This saw a majority of voters oppose completion of one of the two mothballed reactors at the 2,700-MW Lungmen complex.

Coal-fired capacity remains equally under pressure politically, but has not suffered the precipitous fall in capacity and output experienced by the nuclear sector. At least six ageing coal-fired plants are planned for closure by the mid-2020s, but it appears there could be some slippage in their closure dates.

This is in part because the renewable energy target of 20% by 2025 has been downgraded by the government on at least two occasions. Most recently, MOEA said in July that renewables would account for only 15.1% of electricity output in 2025. Although the shortfall was attributed in part to higher electricity demand than originally forecast, there has also been significant slippage in the implementation of the proposed renewable capacity. 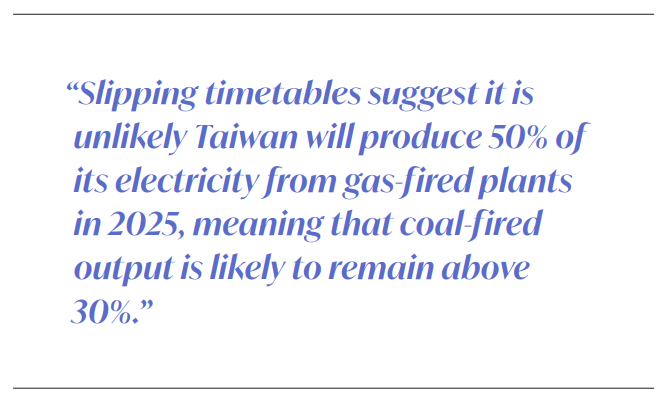 There are various reasons for this, with land availability for the proposed solar capacity being one of the key ones. The agricultural lobby has opposed potentially cultivable land being lost to solar arrays, even when the land is not under production.

At the end of 2021, only 7.7 GW of solar capacity was operational – well up from the 1.2 GW operational in 2016, but well short of the growth rate needed if 20 GW is to be operational by 2025. The cost and logistics of offshore wind capacity also remain an issue, making the 5.5 GW capacity by 2025 ambitious at least in timing.

According to Taipower’s list of ongoing thermal power projects three 1,000-MW CCGT units at Datan are scheduled for operation from 2022 to 2024; three units at Hsinta from 2024 to 2025; and two more 1,000-MW units at Taichung in 2025 and 2026. However, some of these developments appear to be making slow progress.

In any case, Taiwan currently has insufficient LNG regasification capacity to fuel all of the planned new gas-fired power plants, if they were to come online in 2025. 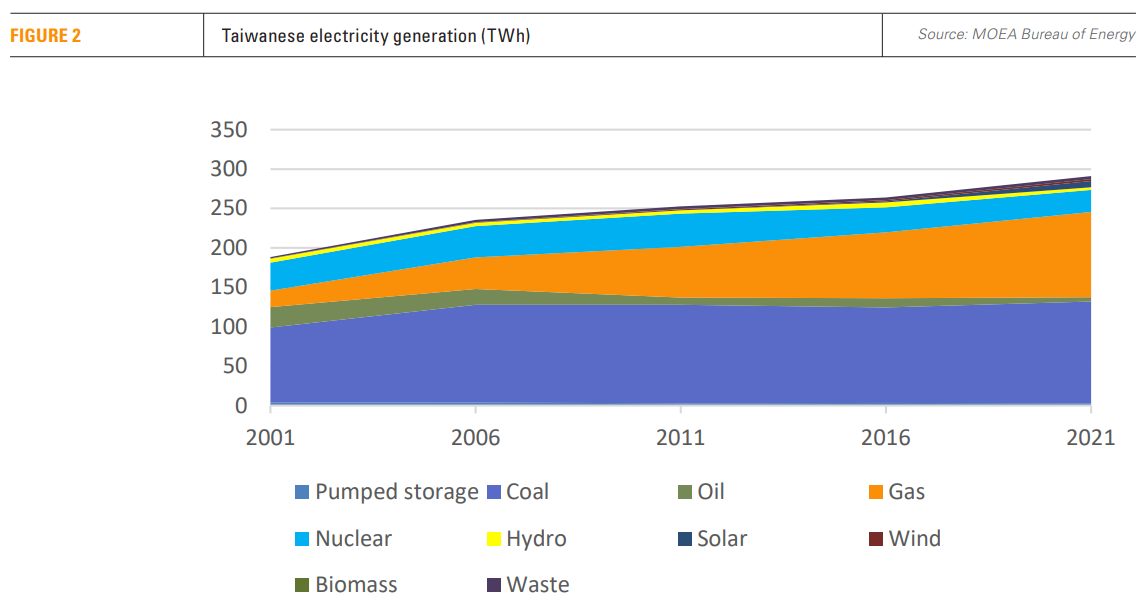 The state energy company CPC Corp operates two LNG import terminals at Taichung and Yung-An. Both are due to be expanded, while CPC is planning a third terminal at Taoyuan. Meanwhile, Taipower is developing projects at Taichung Port and Xie-he. But achieving a substantial increase in regasification capacity as early as 2025 could be problematic.

That is far from saying that no progress is being made. On July 15, the US-based Bechtel broke ground on two 180,000 m3 storage tanks as part of the third-phase expansion project at CPC’s Taichung terminal. Bechtel said the tanks, the largest to be built to date in Taiwan, would help raise the terminal’s annual capacity to 10mn mt/yr on their scheduled completion in 2026.

Taichung’s annual capacity will further increase to 13mn mt/yr when a fourth-phase expansion project is completed in 2029. The front-end engineering and design contract for the project was awarded to a subsidiary of Japan’s Osaka Gas in April 2022.

Prior to that, CPC’s third LNG receiving terminal in the Guanyin District of Taoyuan is due to begin operating by the end of 2025. The part-completed plant, the first phase of which will have 3mn mt/yr capacity, survived a referendum requiring its relocation in December 2021.

Meanwhile, Taipower is pushing forward with its planned LNG terminals at Taichung Port and Xie-he, although both projects appear to face considerable headwinds. The latter terminal will allow the conversion of the 2-GW oil-fired Xie-he plant to gas firing. 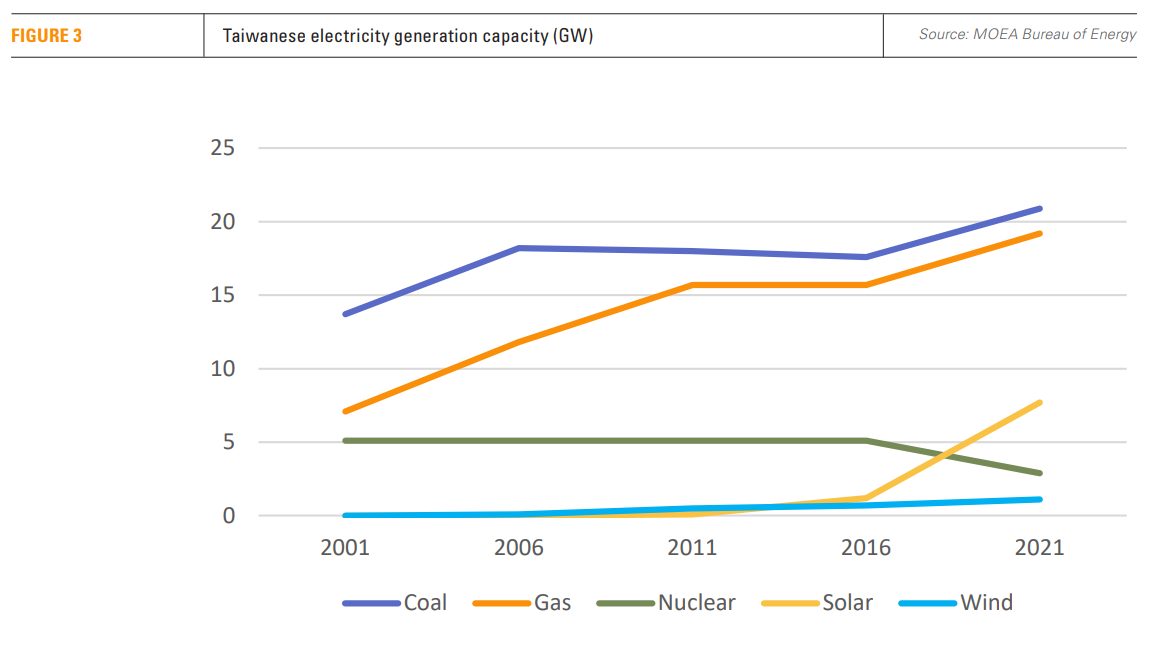 Slipping timetables suggest that it is unlikely Taiwan will produce 50% of its electricity from gas-fired plants in 2025, meaning that coal-fired output is likely to remain above 30%.

However, post-2025, gas-fired generation should increase significantly and more LNG imports will be needed. With Russian LNG having disappeared from the picture in March 2022, this is likely to put further emphasis on supplies from the island’s main suppliers, Australia and Qatar. Long-term contracts already cover more than 70% of the island’s LNG purchases and more are likely to be sought.

This will not be good news for CPC’s balance sheet unless there are changes to Taiwan’s creaking energy pricing system. Unable to pass the spiralling cost of LNG on to Taipower and other consumers, CPC lost T$55.5bn ($1.9bn) in the first six months of 2022, having posted losses of NT$43.4bn in 2021. Changes appear unlikely as Taiwan’s internationally-low electricity prices underpin its rapidly-growing semiconductor and other industrial production. CPC’s fragile finances appear to be a price the government is willing to accept.

Hot air and the war on fossil fuels [Gas in Transition]