The global LNG industry grew larger and more flexible during 2019, but also increasingly oversupplied and low-priced. It entered 2020 facing a crisis, with added demand challenges, exacerbated by the Covid-19 pandemic. The combination of these factors is accelerating reshaping of the industry.

Record numbers of final investment decisions for gas liquefaction projects were taken in 2019, mostly in the US, Mozambique and Russia, totalling 70.8mn mt/yr. This record volume of sanctioned liquefaction projects was underpinned by the expectation of ever-growing LNG demand globally. But in view of the pandemic and the changes this is bringing, this expectation will now need to be revised.

Many of these sanctioned projects were in the US, totaling 30.1mn mt/yr, thanks to the availability of abundant shale gas. Africa also added 20.9mn mt/yr of sanctioned liquefaction capacity in 2019. Also included was Arctic LNG 2 in Russia, with Novatek developing liquefaction facilities in the Arctic region, where projects are able to leverage abundant, cheap, gas resources, and geographic flexibility in exporting to both Europe and Asia.

By December 2019, 123.3mn mt/yr of liquefaction capacity was under construction or sanctioned for development (Figure 1), with about 40% in the US. Excessive supply of shale gas is doing to the LNG industry what shale oil has done to the oil industry – uncontrolled supply with optimistic forecasts of demand, especially Chinese demand. 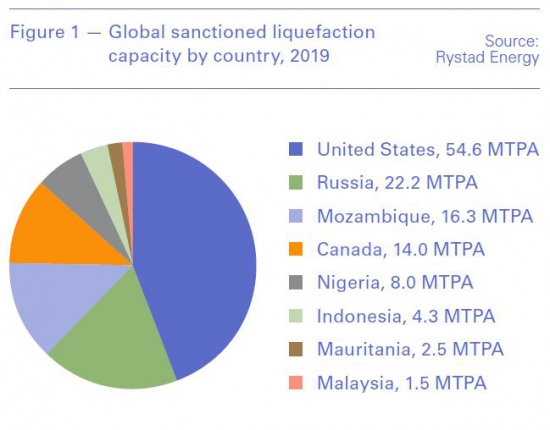 According to IGU’s latest report, with 24.35mn mt/yr new liquefaction capacity additions expected in 2020, that global liquefaction capacity will reach 454.8mn mt/yr by end of the year. This is well in excess of demand, expected to remain around 2019 levels, ie about 355mn mt/yr. But that was before the impact of the Covid-19 pandemic.

Projects at pre-FID stage have reached 907.4mn mt/yr, with the great majority coming from the US and Canada: it needs to be borne in mind that many projects were chasing the same customers, so even in the rosiest scenario there is a lot of double counting.

Africa, with 93.3mn mt/yr pre-FID liquefaction capacity proposals, could emerge as a key LNG production region if these projects materialise. But with the current weak global LNG demand climate and persistently weak global prices, many of these are not expected to progress.

There are more than a dozen liquefaction plants scheduled for FID in 2020 and if buyers remain hesitant to sign long-term agreements, most of these may be deferred and some will be cancelled. With most majors announcing significant spending cuts this year and next, investment decisions will be delayed.

For example, ExxonMobil has already announced it would not go ahead with FID on its Rovuma LNG plan in Mozambique this year. And NextDecade announced May 19 it would defer sanctioning its 27mn mt/yr Rio Grande project in Texas until next year. Even more drastic, Shell has withdrawn from the Lake Charles II LNG project in the US.

But some projects, especially those that are low-cost, are still progressing. Shell announced early May that all conditions have been met for FID on a new liquefaction unit at Nigeria LNG. Along with its partners, it will also be an offtaker, and the extra 8mn mt/yr of output will replace declining equity output elsewhere.

In addition, Qatar LNG has reconfirmed its plans to expand its liquefaction capacity – through the Qatar North Field LNG Expansion project – by 30mn mt/yr by 2025, with another 19mn mt/yr to be added by 2027. This is the world’s most cost-competitive source of LNG.

New LNG export projects, and developers, need to brace themselves for a continued glut as further production is added, outpacing global demand, contributing to prolongation of depressed prices.

This may be followed by a period of recovery, but while it is relatively easy to see what is coming on the supply side, given the long lead times for liquefaction projects, predicting demand is much more difficult.

Should all these projects, and some of those at pre-FID stage, eventually materialise – even if construction is delayed by a year or two – it would extend the expected period of oversupply far into this decade. And even more so, if the impact of the pandemic on the global economy results in a prolonged weakening of gas demand.

Global gas prices were at record lows in 2019 (Figure 2), only to be beaten by even lower prices in 2020 (Figure 3). Prices in 2019 were impacted by increasing natural gas production, the commissioning of new LNG export infrastructure and limited demand response from Asian markets.

With LNG demand in Asia flat throughout the summer of 2019, more and more volumes headed to Europe. And even though prices increased, winter prices in northwest Europe remained at their lowest level in ten years.

So far, 2020 is proving to be even more challenging for natural gas and LNG producers, as – with the added impact of the Covid-19 pandemic on the global economy – prices have become even lower (Figure 3). Prices in Asia, Europe and the US have converged to below $2/mn Btu. The current market environment lowers the expectation of seeing a significant recovery in prices back to 2019 levels any time soon.

Challenges that will influence or affect the LNG industry in the years ahead include:

These all pose potential challenges, but also opportunities, to the future of gas and LNG markets, requiring solutions.

For most of its history, LNG trade has been driven more by supply than demand. Producers output as much as they can and the market somehow balances, as any ‘surplus’ cargoes find a home in a market of last resort. 2020 may be the year when this assumption ceases to apply.

As a result of reduced industrial and commercial activity, LNG buyers have been scaling down orders, and in some cases refusing cargoes by invoking force majeure. Buyers in Asia and Europe – where storage is almost full – have cancelled about 20 to 25 US LNG cargoes for June loading. Prices are now at levels that threaten the economics of not just new projects, but also existing LNG production, with some liquefaction plants having to shut-in production – especially in the US. Goldman Sachs is forecasting up to 30mn m³/d of US shut-ins this year.

Prices are now so low (Figure 3) that US LNG exporters are trading at less than half breakeven levels, weakening their position even further. Chesapeake Energy, the once-pioneering shale gas producer, said early May that “it is no longer able to access financing and is considering a bankruptcy court restructuring of its over $9bn debt if oil prices don’t recover from their sharp fall caused by the Covid-19 pandemic.”

But so far the impact of the pandemic has not been felt as strongly by the gas industry as oil. Demand in 2020 may remain more or less flat, but it still is very difficult to forecast. However, the International Energy Agency (IEA) estimates a 5% drop in global gas demand in 2020. With new LNG production expected to come online this year, the biggest problem is increasing oversupply: it may take years before this problem fully dissipates.

This is reflected by gas prices in 2021 and 2022 being revised downwards by lower economic growth and LNG oversupply forecasts. With oil prices staying low, oil-indexed LNG prices will also stay low. And with new, and already sanctioned, liquefaction projects continuing to come into the market until 2027 – including Qatar LNG – the pressure on prices is expected to continue.

But once the threat from the pandemic is over and the global economy starts picking up, near-term LNG demand will improve from its lows during the first half of 2020 and gas prices are expected to see some improvement (Figure 4), but stay below 2019 levels. Such signs are already beginning to emerge, starting with China as it returns to work.

The LNG industry was already oversupplied before it entered the pandemic crisis. This will not change. It will continue on shaky ground for longer. Weak Asian demand and increasingly saturated European gas markets – and storages – mean that the LNG oversupply problem and low prices will persist for some time to come.

As Cedigaz points out, “If oil prices recover from the current lows, thus resulting in a significant and prolonged disconnection between oil-indexed prices under long term contracts and spot gas prices, then buyers may be pressured to look at renegotiating the long-term oil indexed contracts and even move away from oil-linkage in new contracts.” This is already happening.

There is an additional challenge. The role of gas as an energy transition fuel is increasingly under question as, approaching COP26, pressure to reach Paris Agreement targets mounts and Europe carries on with its Green Deal, with an expectation that demand may peak in the 2030s.

However, provided it remains cheap, and the industry takes the opportunity to restructure and reshape itself, with demand picking up natural gas will still have a key role in providing reliable and cleaner energy well into the future.