The Spanish gas transmission system and LNG import terminal operator Enagas is a clear example of how the latter industry has switched from a traditional model to a LNG multimodal terminal dealing with small, medium and large-scale services.

For instance, during the past three-four years, reloading services at LNG regasification terminals in Spain have played a key role in compensating for the decrease in regasified volumes. Reloaded LNG was sent to alternative destinations mainly to the Asian and South American markets. In 2014 Spain reloaded more than 4.8bn m³ of LNG, 60% of total LNG reloaded worldwide.

This made Spain the largest LNG exporter in Europe, surpassing Norway, despite not having any LNG domestic production in the country. However, as a consequence of the recent sharp reduction in regional price differentials the number of reloading operations in Europe significantly decreased in 2015.

The adaptation to more demanding market needs required Enagas to face a number of technical challenges with innovative solutions regarding the management model, maximizing availability at existing assets, and adding efficiency to the classical value chain integrating new logistic services.

To this aim, Enagas implemented significant LNG terminal modifications, while maintaining a high quality of service in terms of availability, time of response, efficiency and operative security: there were zero incidents after more than 10 years of continuous capacity upgrading.

These new logistic services were developed right in time as the Iberian spot market started to develop, contributing to the creation of a liquid gas hub in the Iberian Peninsula and taking advantage of the resulting transparent price formation in the market. The Iberian hub (Mibgas) registered its first transactions in December 2015 and is expected to progressively continue increasing liquidity in the market, particularly as gas sellers should start, from October 2016, managing their imbalances in the market. This new platform, besides providing a clear price reference, will also allow for flexibility in trade and enable the reduction of lead times, accommodating the market to the needs of demand.

Enagas has more than 40 years’ experience of ‘small scale’ LNG. In this sense, Spain is an excellent example, if not the best, of LNG truck loading. Since the first truck was loaded in 1970 at the Barcelona LNG Terminal, up to 45,000 trucks/year have been transporting LNG, not only inside the country, but also abroad through different European countries. The truck loading market in Spain represents around 4% of the total annual conventional demand, reaching 10,719 GWh/year in 2015. 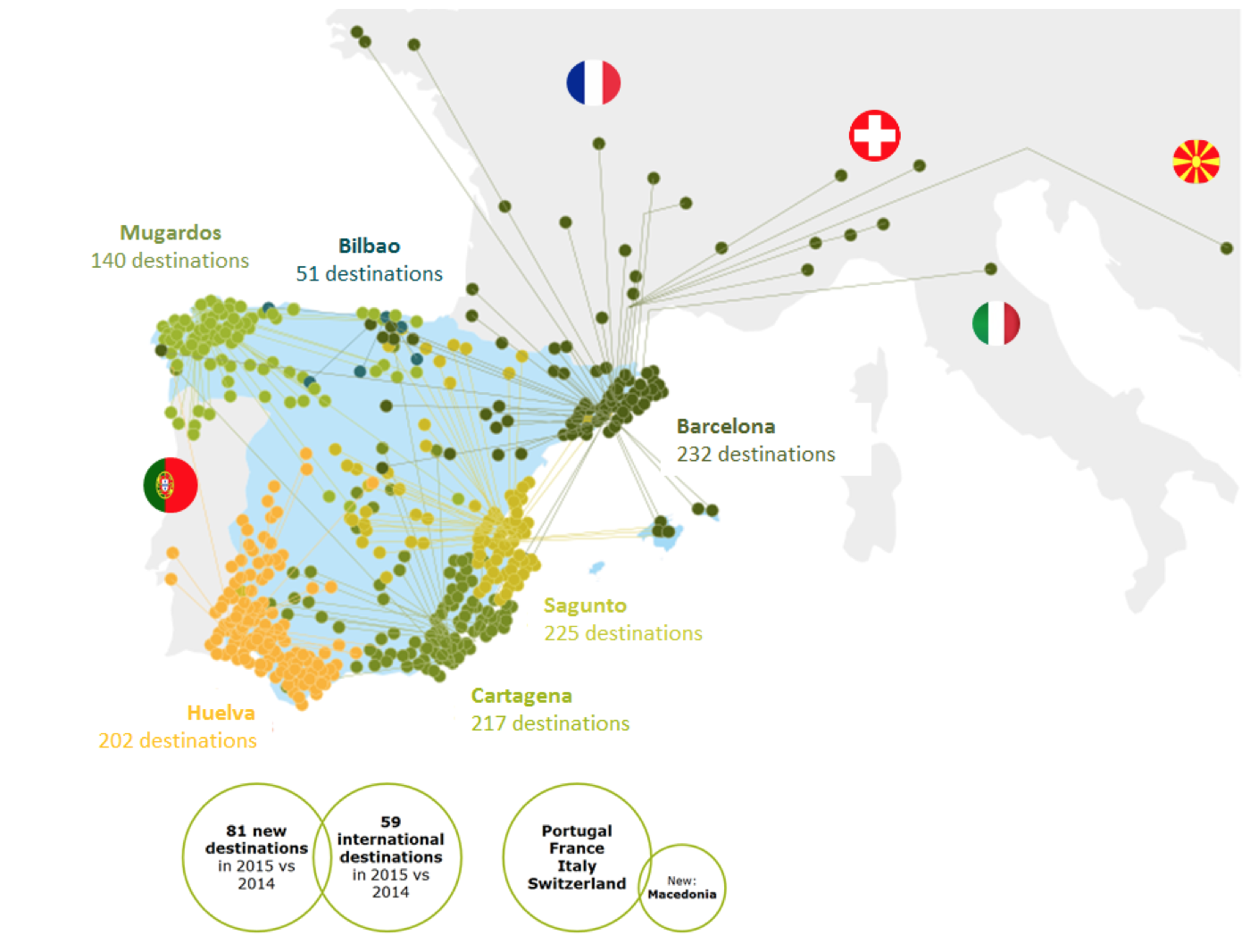 During the last decades hundreds of thousands of LNG truck loading operations have been carried out in Spain. In 2015, there were around 35,000, representing around 80% of total LNG truck loading traffic in the EU. 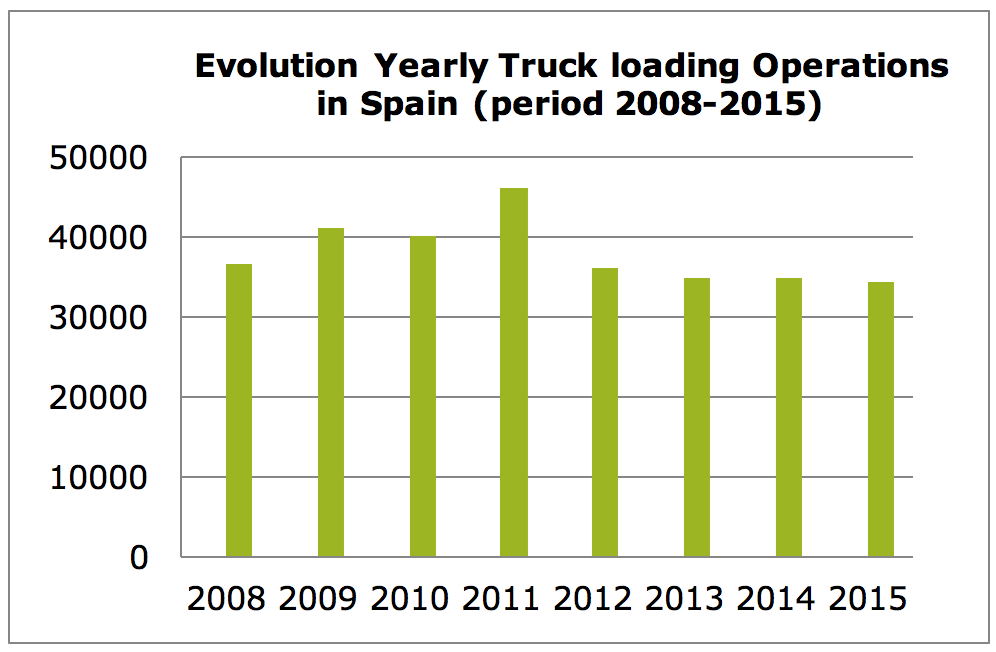 Destinations are mainly satellite plants, where LNG is regasified, supplying local distribution networks, industrial clients and small and medium enterprises SMEs. Even relatively large cities like Albacete or Almeria have been supplied by LNG truck loadings without having any significant incident. The use of LNG truck loading is particularly useful in countries where the pipeline network infrastructure has not yet reached that point, or where the investment cost for connecting those gas users to the grid is uneconomic.

As regards LNG fuelling stations for road transport, at the moment, there are 42 public natural gas stations in Spain, of which 19 can supply LNG as transport fuel. The fleet of NGV vehicles in Spain are over 5,000 units at present, using more than 1,200 GWh/year.

The Iberian Peninsula is set to become one of the most relevant EU regions for LNG trade: its strategic location, the availability of LNG import capacity under regulated third-party open access, and the existence of an experienced midstream integrated operator provide a unique combination for LNG regasification terminal innovation and the provision of advanced logistic services under a multimodal scheme.

Enagas is taking the lead in developing small scale solutions not only in Spain but also at supranational level. In 2016 the European Commission chose the CORE LNGas hive[2] initiative, among the projects submitted for the tender called by the Connecting Europe Facility (CEF) for the development of the Trans-European Transport Networks, and will receive financial support of €16.5nn from the European Commission. The total investment in the project will amount to €33mn. This project was officially presented in Madrid on 19 May. The director-general for energy of the European Commission, Dominique Ristori, the secretary of state for energy, Alberto Nadal and the presidents of the Spanish State Ports Authority, Jose Llorca, and Enagas executive chairman, Antonio Llarden, attended the event[3].

The project, coordinated by Enagas and with strong involvement of the Spanish Ports Authority, involves 42 partner entities in Spain and Portugal: eight state-owned institutions, 13 port authorities and 21 industrial companies such as LNG operators, shipbuilders, regasification companies and other partners. Its execution is planned to last until 2020 and will put forward a national action framework for the use of LNG as maritime fuel in Spain. A total of 681 projects were submitted to this European tender, of which 267 were selected, among them CORE LNGas hive.

The aim of the project is to develop a safe, efficient, integrated logistics and supply chain for LNG in the transport industry, particularly for maritime transport of the Iberian Peninsula. It involves 20 studies, to be conducted by the partner companies for adaptation of infrastructure and logistical - commercial development in order to offer small-scale supply services and bunkering.

In accordance with Directive 2014/94/EU on the deployment of alternative fuels infrastructure (Clean Power for Transport), this project will contribute to the decarbonisation of the Mediterranean and Atlantic corridors.

With eight regasification plants, the Iberian Peninsula is geostrategically positioned and possesses LNG logistics know-how key to the development of the project and the consolidation of the region's leadership in this field.