Four western Balkans nations signed a memorandum of understanding with Azerbaijan state Socar on co-operation on building the Ionian Adriatic pipeline (IAP) on the sidelines of a Dubrovnik forum 25-26 August.

The declaration of intent to develop the 5bn m³/year line was originally signed in 2007 by Croatia, Montenegro and Albania. The length of the line from Split in Croatia to Fier in  Albania will be around 530 km and cost around €610mn ($683mn).

Socar will join Croatia, Albania, Bosnia & Herzegovina and Montenegro in the project which will include a section of the Trans-Adriatic-Pipeline (TAP) designed to bring gas from Shah Deniz 2 field in the Caspian Sea to EU through the so-called Southern Gas Corridor (SGC) after 2020.

Socar's goal is to connect the Caspian Sea and the Adriatic Sea, the head of Socar Balkans, Murad Heydarov, said after the signing ceremony. "The SGC, which includes the Ionian-Adriatic gas pipeline is an important part of our plans, we have good co-operation with the countries involved in this project," he said, according to Socar sources.

Croatia's economy minister Tomislav Panenic said that the future pipeline would provide gas supplies for southeastern Europe. "We have defined our joint initiative for the development of the Ionian-Adriatic gas pipeline as a route that will make sure that these markets are provided with gas. We hope that this route will be a connection between the north and the south and that this may pave the way for a full liberalisation of the gas market in Europe," he said, Croatian news agency Hina reported.

Montenegro's economy minister Vladimir Kavaric said that IAP was the only opportunity for the gasification of Montenegro and "the government is ready to do everything to accelerate and successfully implement the project." 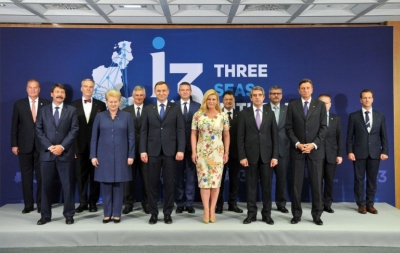 According to preliminary design IAP aims to connect existing transmission system of Croatia via Bosnia & Herzegovina (offshore), Montenegro and Albania to the TAP.

The Baltic-Adriatic-Black Sea (BABS) forum brought together six presidents and high-ranking government officials from 12 EU countries and Albania on  August 25-26 in Dubrovnik, Croatia. A panel discussion at the "Strengthening European energy security" looked at the benefits of energy cooperation in BABS and the role of LNG terminals linking north and south Europe.

Connecting the LNG terminal in Poland with one planned on the island of Krk in Croatia is among the energy projects that BABS region countries want to implement in order to boost competitiveness and development, Croatia's president Kolinda Grabar-Kitarovic and Poland's president, Andrzej Duda, said addressing  forum at the opening ceremony August 25.

President Duda pointed out the importance of energy connections.“The dominance of a single supplier for the region is harmful and dangerous”, he said adding that development of the gas corridor between the north and the south, as well as the LNG terminal on the island of Krk are important.

The next meeting of BABS will take place in Wroclaw in June 2017.