Russia’s invasion of Ukraine is a turning point of gigantic proportions for European security of energy supply, one which has important antecedents and extensive implications, not least for LNG.

The Ukraine gas crises of the late 2000s and early 2010s focused European attention on the vulnerability of over dependence on Russian gas imports and resulted in a number of improvements to European security of gas supply.

These included support for the Southern Gas Corridor, the construction of LNG import capacity, particularly in Eastern Europe, and improved interconnectivity within the European gas system so that non-Russian gas could better reach those nations most dependent on Russian pipeline gas.

However, the aim was not to cut gas ties with Russia, but to diversify supply sources and increase flexibility. Large volumes of Russian gas would still be consumed within Europe, but Gazprom’s pricing power would be capped by competition from other sources in liberalised, unbundled markets.

Construction of the Nord Stream and South Stream pipelines, although contentious, was largely accepted as a Russian fait accompli, one which, in any case, reduced the specific vulnerability presented by fractious Russian-Ukrainian relations.

There would still be a partnership between Europe and its largest gas supplier Russia, but Ukraine’s role as a transit nation would to a significant extent be sacrificed.

But it was and is an odd relationship in terms of the energy transition.

The EU and the UK have adopted net zero carbon targets by 2050, which implies a huge reduction in natural gas use, if not its eradication. Abated gas remains a possibility for both direct use and as a means of hydrogen production, but the carbon profile, expense and complexity of carbon capture and storage means it is not top of the list of desired options.

In effect, Europe is in a partnership with Russia, but has imposed a 30-year time horizon with its demand for gas falling over the period as it does everything it can to reduce greenhouse gas emissions to acceptable levels.

There is also considerable environmental opposition to natural gas in any form, owing to concern that even where it might deliver short-term emissions reductions by replacing more carbon-intensive fuels, it would become locked into the European energy system.

Russia’s invasion of Ukraine has met with near universal condemnation. The swathe of sanctions levied against it are rapidly turning it into a pariah state, striking at its enduring weakness – the inability to match its military power with economic strength.

While Russia is a huge country, and has large armed forces including nuclear weapons, it is only the 11th largest in terms of GDP and 74th in terms of GDP per capita based on 2019 data. Within that, it is heavily dependent on oil and gas revenues. Russia has not been successful in achieving significant economic diversification nor establishing itself as a technological innovator.

The comparison with China is revealing. China’s economy is ten times larger and far more diverse. Moreover, China has a huge stake in the energy transition, owing to its massive production of solar cells, solar panels, wind turbines and electric vehicles. Russia has next to nothing in comparison.

As a result, sanctions are having a significant impact on what is a relatively unmodernised petro-economy, but the fact remains that Europe is still dependent on Russian gas imports (see graph 1).

How cold is Europe’s shoulder?

Whatever the military outcome, Europe now looks certain to make major efforts to minimise its imports of Russian gas, a strategy which will not come without cost, but one that is aligned with its goals in terms of the energy transition.

The question is how? Germany has announced that it will not certify the Nord Stream 2 pipeline, but this pipeline was never primarily about adding needed import capacity and more about changing the route and delivery point of gas imports to avoid Ukraine.

Reducing Russian gas imports would require a multi-faceted and coordinated approach, one which has been outlined by the International Energy Agency (IEA) in a ten-point plan. But it is immediately clear that while the US, for example, could live with a ban on Russian oil imports, Europe cannot live without Russian gas in the short to medium term.

The IEA’s ten-point plan suggests that the EU could reduce its imports of Russian gas by 50bn m3 within a year through a combination of maximising imports from alternative sources and reducing demand via an acceleration of the energy transition and demand reduction measures.

Additional measures could be taken, the IEA says, which would reduce Russian gas imports by more than 80bn m3, but this would mean a slower reduction of greenhouse gas emissions at least in the short term.

The implications are profound for the European energy sector, which faces a gas market in which prices are likely to remain high, probably for years.

Countries with or considering nuclear power will almost certainly re-evaluate phase out and/or adoption plans. Life-time extensions for existing plants would immediately take the pressure off gas-fired power plants and thus gas burn, but newbuild projects would be both expensive and take years to have any significant effect.

Similarly, but much less likely, is the possibility of slower coal phase outs, although this is probably a last resort, owing to the impact it would have on Europe’s still off-track zero carbon ambitions.

Renewable energy, already at the forefront of energy policy in terms of greening power generation, will receive more backing. The ability to respond is high in terms of solar and onshore wind, if the permitting issue can be effectively addressed, but the offshore wind supply chain is already being stretched by the proliferation of construction targets not just in Europe but globally. 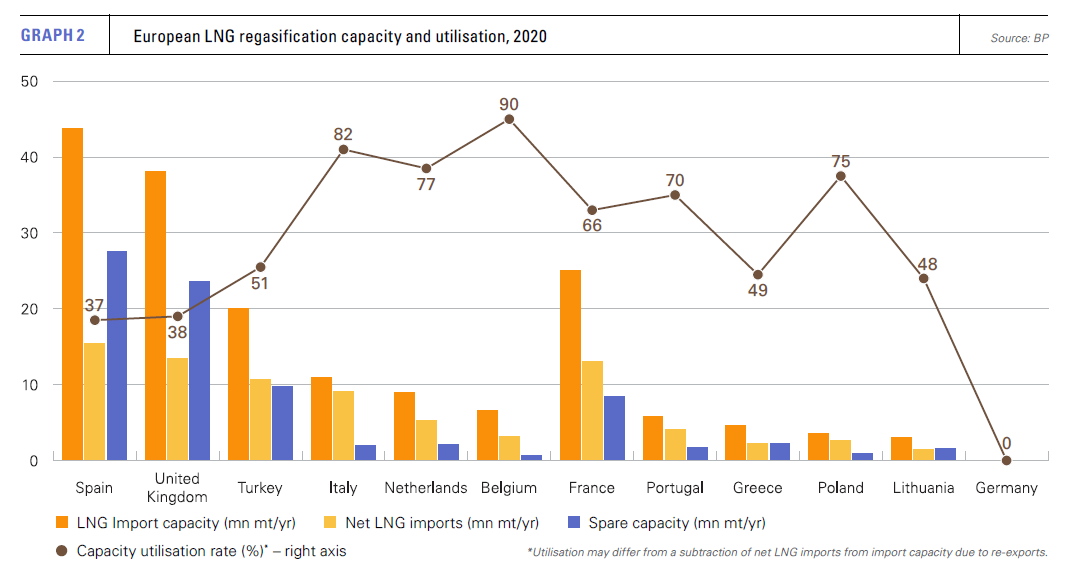 However, high-priced gas will continue to play a central role in electricity price formation. While this may add impetus to weaning Europe of gas in the power sector, sustained high gas prices will add to the cost of broader electrification in areas such as transport and industry.

Locking 50bn m3/yr of gas out of the European system would leave this gas with nowhere to go. Russia has neither the pipeline infrastructure nor the LNG export capacity to get surplus gas to other markets with sufficient demand.

To make up for the shortfall, Europe would need to maximise its three alternatives: pipeline supplies from other exporters, namely Norway, Algeria, Libya and Azerbaijan; domestic production (both natural gas and greener alternatives) and LNG (see graphs 2 and 3). 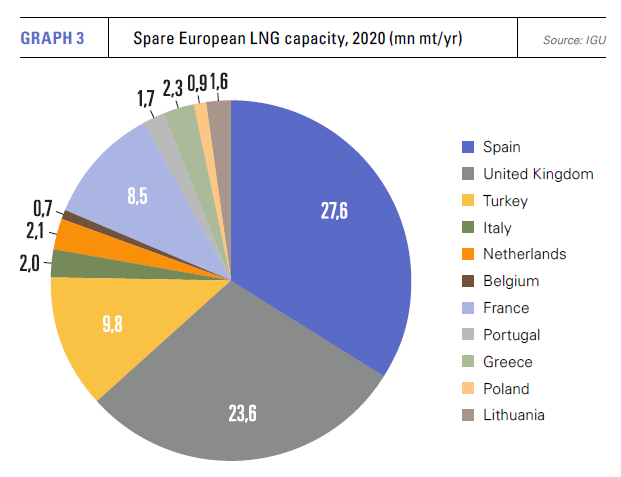 The IEA estimates Europe can source an additional 30b m3 from these sources, the lion’s share of which will come from LNG, which would account for 20bn m3 above 2021 levels. Pipeline imports are limited in the short-term by existing pipeline capacity, while upstream in Libya supply is still being hit by conflict-related outages.

There is now good reason to consolidate energy relations with North Africa, focussing both on the region’s massive renewable energy potential and its ability to supply gas to Europe over the transition period.

Domestic gas – time for a rethink?

Boosting domestic gas production looks problematic given consistent declines in recent years, which have been accelerated hugely by the fall in output from the Netherlands’ once giant Groningen gas field. EU gas production in 2020 dropped 21.9% to 47.8bn m3 (see graph 4).

The sector is failing to attract investment and announcements of new field developments attract huge environmental opprobrium. But there is, in fact, plenty of economically viable gas left in the ground at current prices.

A perverse side effect of the energy transition is that imported gas (seen as temporary) is preferred to domestic gas because of the fear of long-term lock in. Yet in carbon accounting terms, domestic gas is less carbon-intensive than gas that has travelled thousands of miles from upstream operations over which Europe has little control in terms of emissions. 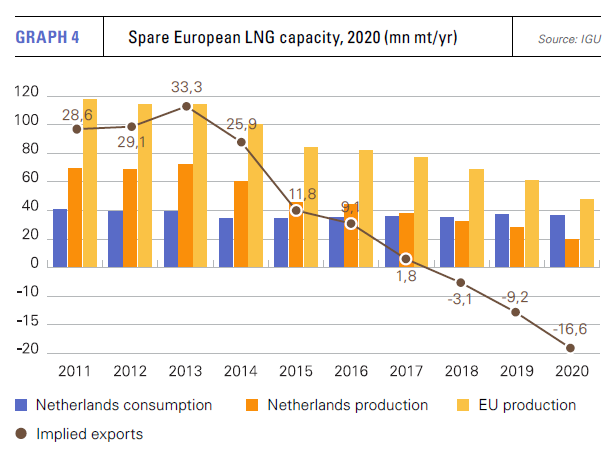 But the main cost of this preference is increased import dependency and extended supply chains, with all the vulnerabilities which Russia’s invasion of Ukraine has exposed. The prospects for Europe’s mature gas basins should be reassessed; politicians may now accept the view that domestic gas production and emissions are a lesser evil than Russian imports.

Where, for example, does the UK’s suspended Cambo oil and gas field project, which could produce 170mn barrels of oil and 53.5bn m3 of gas over 25 years, stand in the light of Russian military expansionism?

LNG is the key

Whichever way the situation is viewed, LNG as the primary option for displacing Russian gas imports. Europe has significant spare regasification capacity – 60bn m3 above 2021 levels in the EU, according to the IEA, while the UK had about 27.2bn m3 spare import capacity over 2020 levels and the ability via interconnectors to export gas to the Netherlands and Belgium.

However, LNG import capacity is a necessary but not sufficient element in the equation. Moreover, the distribution of this regasification capacity is uneven, with most concentrated in northern Europe with the exception of Germany. Onward transmission of regasified LNG remains an issue with central and eastern Europe still least well served.

Germany has no regasification capacity, although it is now fast-tracking the development of two terminals, and would therefore be dependent on increased west-east gas flows. Russian pipeline imports accounted for 65.1% of German gas consumption in 2020.

Italy also looks vulnerable as its economy is heavily dependent on gas, but the country has only 10.9mn mt/yr (14.8bn m3) of regasification facilities, which have been used close to full capacity in recent years. In 2020, Italy consumed 19.7bn m3 of Russian pipeline gas, 29.1% of its total gas consumption, and imported 12.1bn m3 of LNG.

Boosting LNG imports further will mean pulling additional cargoes from an already tight global LNG market. Reduced Russian gas imports to Europe in fourth-quarter 2021 and in January 2022 have already provided a taste of what that might entail in terms of pricing, when Asian demand is strong.

New LNG capacity is in the pipeline, but a sustained increase in Europe’s already elevated LNG imports implies that all that new capacity and more will be needed to meet both Asian and European demand.

Sustained high prices for LNG will also affect Asia. Many Asian countries, not least China and India, are looking to LNG as a means of coal-to-gas switching. South Asia, in particular, is very price sensitive and may abandon or scale down such plans. This might have positive long-term environmental benefits in that it will accelerate the deployment of renewable energy, but in the short to medium-term it implies an extended period of coal use. 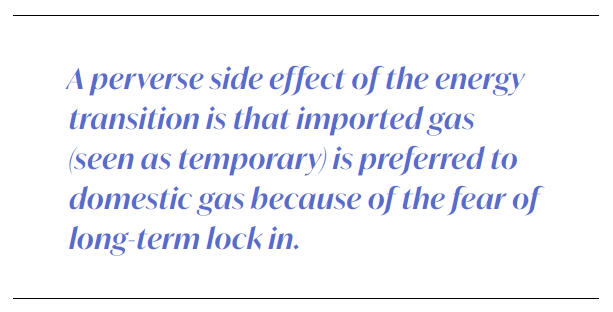 Natural gas makes up a quarter of global primary energy supply, a smaller proportion than either oil or coal, while nuclear and renewables, including hydro, in 2020, accounted for just 17%. Global gas use has yet to peak because of its role in displacing more carbon-intensive fuels, but the LNG market is not ready in the short-term to respond to a demand-side shock without pricing effects.

As a result, if Europe shuns Russian gas, the LNG sector will need support in building new liquefaction capacity, reversing the political swing against gas investment evident over the last five to ten years. US and other LNG developers should now be looking out for European and Asian utilities keen to lock-in long-term supply deals to ensure the expansion of the LNG market.