The shipping industry’s share of GHG emissions is forecast to rise from 3% at present to 17% by 2050, although this is partly the result of the big reductions expected in other sectors. Although methane emissions are much lower than for carbon, they trap 86 times more heat per volume than carbon over the first 20 years following release.

The Intergovernmental Panel on Climate Change (IPCC) has called for an almost 50% cut in total GHG emissions between 2017 and 2030, but the goal for methane is a more modest 35% reduction between 2010 and 2050. Animal agriculture is the biggest source of methane emissions, but the LNG sector will also be called on to improve its performance.

As a result, reducing the accidental release of methane from engines – known as methane slip – will be vital in improving LNG’s environmental profile as a shipping fuel. 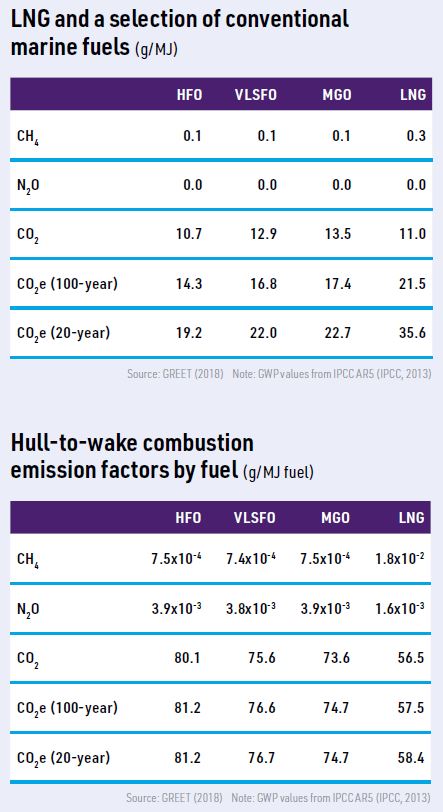 A report published by the International Council on Clean Transportation (ICCT) for the NGO Stand.earth in January concluded that using LNG as a ship fuel usually generates more GHG emissions than established fuels because of methane slip.

There was one exception: high-pressure, dual-fuel (HPDF), slow-speed, two-stroke engines, which are now used in some LNG carriers and container ships and which produce a tiny fraction of the methane slip.

“Switching ships to LNG is worse than doing nothing. This should serve as an alarming wake-up call for the International Maritime Organization, which must act now to ensure it includes all GHG emissions in its emissions reduction strategy,” said Kendra Ulrich, senior shipping campaigner at Stand.earth.

Dr. Elizabeth Lindstad, chief scientist at SINTEF Ocean, Maritime Transport, said that policies are needed to reduce all shipping industry GHG emissions, not just carbon, including the well-to-tank emissions of ship fuels. “If we fail to include all GHGs and focus only on CO2, we might end up with a large number of ships fulfilling all efficiency requirements, but where the GHG savings are on paper only,” she said.

The Sustainable Gas Institute (SGI), an industry-funded body based at Imperial College London, produced a report in January 2019 that was more favourable to LNG. The SGI found virtually identical GHG emissions’ ranges and averages for marine diesel oil and LNG, although the emissions of both were marginally lower than for heavy fuel oil. It found that bio-LNG produced 64% lower lifetime GHG emissions than LNG.

Keith Bainbridge, managing director of CS LNG, pointed out that shipping emissions are not limited to carbon dioxide, methane and nitrous oxide, but also include sulphur oxides, nitrogen oxides and particulate matter. LNG produces much lower PM emissions, which have a big negative effect on human health, than any oil fuel.

Dr Bryan Comer, senior researcher on the ICCT Marine Program, said: “The best option if using LNG is to use an HPDF engine, but better still from a lifecycle GHG perspective would be to run dual fuel engines on marine gas oil because it eliminates upstream and downstream methane emissions.”

The HPDF engine technology is more efficient, combusting more of the methane than the LPDF technologies, resulting in lower methane slip, but higher NOx emissions, which are controlled using selective catalytic reduction or exhaust gas recirculation, he said. In addition, HPDFs have very low amounts of methane in the gas that gets past the piston rings (blowby gas), while this can be an important contributor to methane slip in low-pressure systems with open crankcases.

However, Bainbridge said the ICCT study failed to account for the fact that HPDF engines require a high-pressure fuel gas supply system, which has considerable electric power demand. This is typically supplied by LPDF four-stroke auxiliary engines, which have higher specific fuel oil consumption and methane slip than low speed engines.

“The dual fuel engines in gas mode, in addition to reducing NOx emissions, have the potential to remove SOx emissions entirely because natural gas typically has virtually no sulphur in it, as well as reducing the PM to very low levels”, he said.

Moreover, the HPDF engine is not compliant with the mandatory IMO MARPOL Tier III NOx emissions either in gas or diesel mode unless it employs exhaust gas treatment technology, said Bainbridge.

Given the various report findings, emissions control technologies are likely to be crucial in improving LNG’s environmental profile. Methane oxidation catalysts are one option, but they convert methane to carbon dioxide.

“So while it’s definitely an improvement, it doesn’t eliminate the GHG emissions from using LNG, and I don’t know how effective they would be on a ship”, said Comer. The catalysts need platinum, which is expensive and are sensitive to water vapour, which could be a problem at sea.

The SGI report states that a three-way catalyst can be paired with spark-ignited stoichiometric engines to reduce methane slip in the exhaust gas, while an oxidation catalyst is used to control emissions from spark-ignited lean burn and compression-ignition engines. It also argues that crankcase ventilation systems and improved oxidation catalysts can be used to minimise or eliminate crankshaft emissions. However, it cites ICCT research that found that there has been little incentive for manufacturers to implement these technologies.

Bainbridge said that there have been continuous technology improvements and new developments in the area of engine performance/efficiency, emissions improvements/compliance and “intelligent system integration for low pressure dual fuel (X-DF type) engines, currently only WinGD, although MAN are in development stage”. He said that the higher the cylinder bore the lower the total hydrocarbon content (THC) emissions, where methane slip is taken as 80% of THC.

“To address directly the methane slip issue, our information is that WinGD is developing the new generation of low-speed low-pressure lean-burn dual-fuel (LPDF two-stroke) engine by releasing the X-DF 2.0 in March this year”, said Bainbridge. He noted that WinGD reports that this will reduce current methane slip volumes by up to 40%, while improving the specific gas consumption by up to 3 g/kWh and the specific fuel oil consumption by up to 8 g/kWh, which will also help cut overall GHG emissions.

Coastal GasLink Winds Down Ahead of Spring