When the dated Brent crude oil price peaked at above $71/barrel (b) in 2018 – its highest since 2015 – the state-owned Saudi Aramco spent $35.1bn, of which about two thirds went on upstream capital expenditure. The next year, the oil price fell to $64/b. But the company cut costs by only $2.3bn, mostly because it had finished the giant Fadhili gas plant. Upstream costs also fell, but ‘only’ by $758mn.

Before the oil price collapsed in March, Aramco had put the 2020 investment plan at $25-$30bn. It seems that the current $23/b price of dated Brent is high enough for the kingdom, as its upstream lifting cost is $2.80/b of oil equivalent (boe), and upstream capital expenditure averages $4.70/boe produced.

However, according to the International Monetary Fund’s assessment released last October, the break-even oil price for Saudi Arabia in 2020 is at least $83.60/b.

In mid-March, with the oil price at less than half that, the kingdom said it would cut spending by another 5%. That would not bring the books into balance, especially given the lost tax and tourism revenues and higher spending in the wake of the Covid-19 pandemic.

Saudi Arabia said it planned to increase production from 9.7mn b/d in February to 12.3mn b/d in April after Russia rejected Opec’s proposal on March 6 to cut crude output by 1.5mn b/d from the start of that month.

The targeted volume for April is a little more than its believed actual capacity, although it could draw on stocks in the short term, which stands at 86mn b, including 20mn b stored abroad. However that could be a risky strategy: overseas storage was one of the levers at Saudi Aramco’s disposal, when terrorist attacks last September destroyed a major portion of its processing capacity and the petroleum ministry wanted to keep output steady.

The ministry also announced March 17 that it would increase gas output at its Fadhili gas plant in order to free around 250,000 b/d of crude for export markets, using gas instead of crude at home. 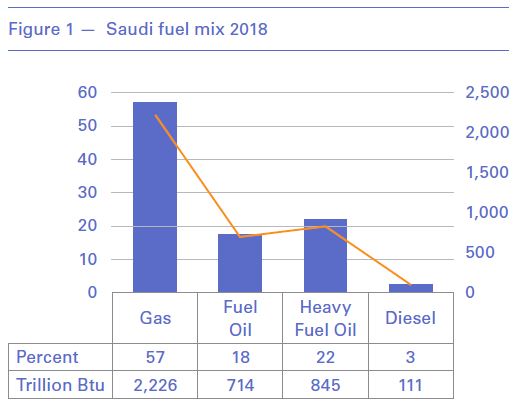 Fadhili is the first plant to treat non-associated gas from both onshore and offshore fields. The plant is processing gas from the offshore Hasbah and the onshore Khursaniyah fields.

The kingdom has been fast-tracking this project since 2016: the first stage was completed in October 2019 with 28mn m2/d; and reached 42mn m3/d in December.

When the plant is at full capacity it will process about 14mn m3/d from Khursaniyah for burning at the 1.5-GW combined heat and power plant, which is also at Fadhili; while the 56mn3/d of gas from Hasbah will be processed for injecting into the grid.

As well as the Fadhili plant and the Hasbah and Khursaniyah fields, the country has started several other up/downstream gas projects.

Last year, the country’s gas production increased by 1.4% to 254mn m3/d, but it is expected to grow fast from now on.

The Haradh enhancement program, started in 2018 to expand the Hawiyah gas plant, is expected to add 37mn m3/d to the country’s gas production by 2021.

It also plans to start up the Tanajib gas plant for processing 70mn m³/d associated gas from the Marjan oil development program by 2023.

Alongside its conventional gas reserves, in February 2020, the Jafurah unconventional gas field with 5.66 trillion m3 in-situ wet gas reserves received regulatory approval for development, but the needed capital expenditure is very high at $110bn. And the kingdom is only expecting $8.6bn/yr net income from this project.

The shale field will be gradually developed in phases, the first of which is expected to go into production in early 2024.

Aramco expects the field’s final production capacity to reach 62mn m3/d by 2036 as well as 550 thousand b/d of gas liquids and condensates.

Last year, gas accounted for 55% of the generation mix, fuelling 85.5 GW capacity and 299 TWh actual output, but as well as displacing more oil products, the kingdom’s gas is also to be stored underground for meeting peak demand.

The country has not published the details of 2019 fuel mix in power plants, but 2018 statistics indicate that the share of gas usage in power plants was 57%, about 2% more than 2019. The country also increased proven recoverable gas reserves by 2.6% yr/yr to about 5.4 trillion m3 last year.

Based on a $1.85bn contract signed with Samsung in January, it plans to start the Hawiyah Unayzah facility by 2023 as its first underground gas storage project into which it will be able to inject above 40mn m3/d of surplus output and withdraw 56mn m3/d in the peak demand season.

Domestic primary energy demand in 2019 remained essentially unchanged at 4.7mnboe/d, following a drop of 1.6% in 2018 year-on-year and this is not expected to change in the coming years. So by increasing gas output, it will change the fuel mix significantly.

Natural gas accounted for almost 36% of the overall primary energy mix in 2019 and around 55% of the power generation and desalination sectors’ fuel mix, according Aramco.

It is not clear whether the state-controlled company is planning to invest in all these projects, but Wood Mackenzie has estimated that global oil and gas expenditures may drop by a quarter this year, compared with 2019.

The Fadhili project is almost complete and the Haradh enhancement programme might be finished on time, adding about 70mn m3/d to 2019 production level in this year and further 37mn m3/d by end-2021.