Russia is the world’s largest energy exporter by a wide margin. The Russian invasion of Ukraine and the Western sanctions against Russia will therefore affect many parts of the global energy system. Worldwide investments in renewable energy will be incentivised by the higher fossil fuel prices. Petrostates will likely benefit from higher oil and gas prices for a few years, only to eventually experience a steeper decline than previously foreseen. Germany and other European countries may find that they are no longer suitable locations for energy-intensive industries. China might find itself in an advantageous position, importing fossil fuels cheaply from Russia even as international demand for clean energy equipment made in China skyrockets. The outlook for blue hydrogen has worsened, while that for green hydrogen has improved.

Decarbonization includes both the phasing-in of clean energy sources and the phasing-out of fossil fuels. In this article, I consider the consequences of the Russian invasion of Ukraine for both and find that it will unleash multiple countervailing forces, introducing new complexity to the future of the global energy system and its decarbonization.

Russia’s invasion of Ukraine is causing price gyrations not only in oil markets—which have been unstable since the 1860s—but also in the usually more staid gas and coal markets. The price instability increases the complexity and risk of fossil fuel investments while strengthening the case for renewables in terms of both price and security of supply. In the long term, these will be the most salient effects of the invasion on the global energy sec- tor. As the world’s largest exporter of fossil fuels, Russia has clearly done itself a major disservice.

For China, Russia’s war against Ukraine may have many negative consequences: the weakening of its main ally, increased unity and resolve on the part of the West to stand up to authoritarian states, reduced domestic and international confidence in the effectiveness of authoritarianism, and accelerated decoupling of the West from China. In the energy sector, however, China may find itself in a win-win situation where it can buy fossil fuels cheaply from Russia (Meister 2022) while simultaneously selling solar panels, wind turbines, and other clean- energy goods and technologies to the rest of the world. Already, 69.8% of the global supply of solar panels comes from China, while only 3.2% and 1.8% come from the United States and Europe, respectively (Statista 2022).

While Russia’s invasion should provide a powerful impetus for expanding renewable energy generation, ramping up renewables will take time. In the short to medium term, fossil fuel prices will be high and fossil fuel companies and exporters will be awash in revenue. The revenue may tempt them to invest more in future fossil fuel extraction, but that would be risky, given the long lead times for most fossil fuel projects and the super- charged longer-term outlook for renewables due to the same high fossil fuel prices.

The improved short-term fortunes of fossil fuel-producing countries could leave them vulnerable to an even steeper decline than previously foreseen, because later they will be falling from a higher point and against a background of more aggressive investment in clean- energy alternatives. The difference in the decline gradient could be substantial and the effect on petrostates could be brutal (see Figure 1 overleaf for an illustration).

Many petrostates have long struggled to handle oscillations in the oil price, which is a driver of “Dutch disease,” considered to be one of the main elements of the resource curse. The price cycle triggered by the Russian invasion of Ukraine could lead to some major resource-curse episodes. 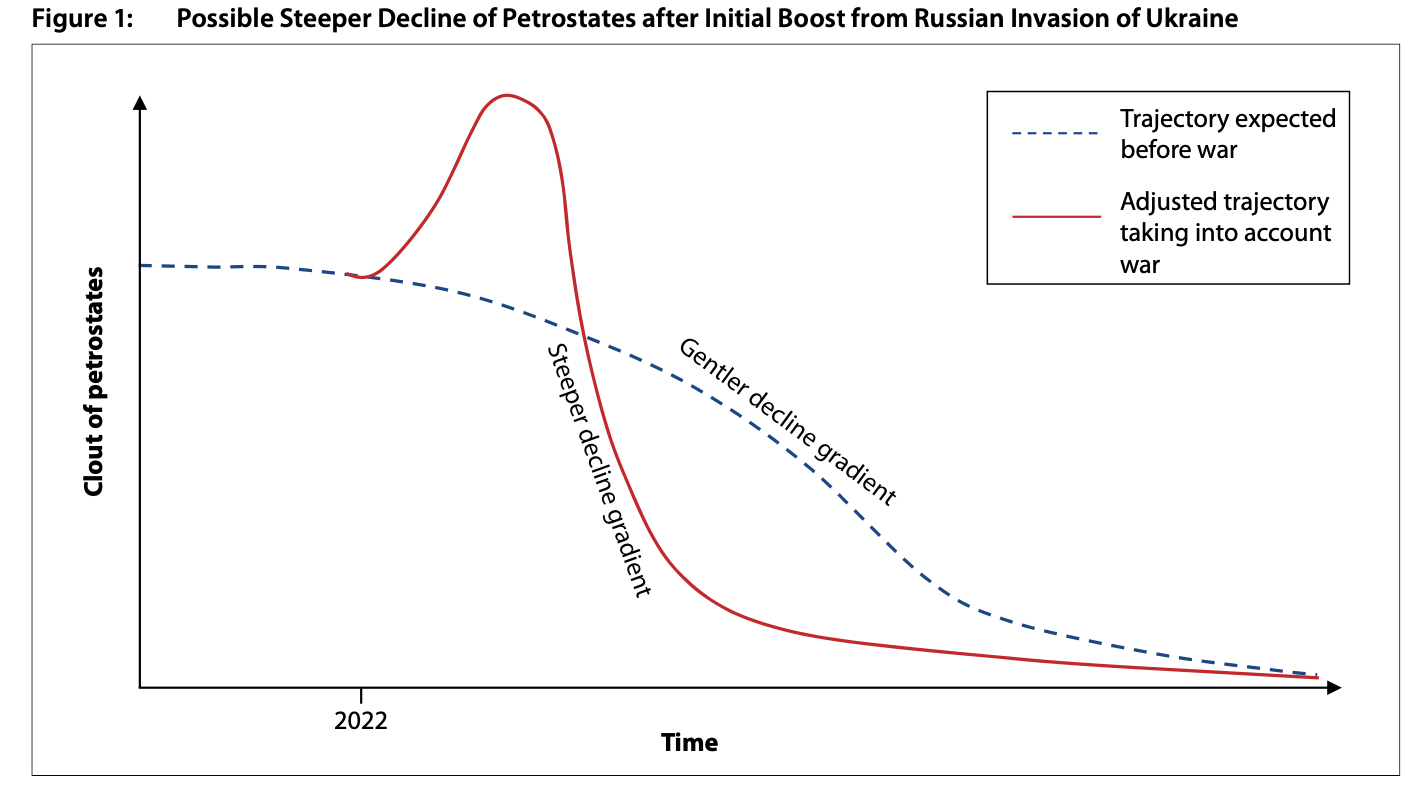 The many countries that have been in the process of ramping up LNG imports—in some cases to reduce reliance on coal—will encounter higher prices as the EU makes a frantic dash for non-Russian gas. Many of those countries are middle- or low-income and will struggle to pay the rising price of LNG. Some of them may deal with this challenge by sticking with or returning to coal, especially if they have domestic reserves.

One of the main ways for the EU to reduce its dependence on Russian gas is through heat pumps. The technology is simple, does not require vast acreage, can be scaled up and down, and does not necessarily require lengthy planning procedures or permitting. Heat pumps are important because heat for buildings makes up a large part of gas consumption and heat pumps can run on (relatively small amounts of) electricity from renewable sources. Anyone in the heat pump business is poised to do well in the coming years.

The Russian invasion has probably also improved the outlook for the international nuclear power industry. Pressure is mounting to pause or reverse German nuclear plant closures, and as more countries start making a more concerted effort to decarbonize, they may start thinking about including nuclear power in their energy mix. As with higher oil and gas prices benefiting Russian oil and gas companies, this looks like an area where Russia could stand to benefit from the international energy turmoil in the wake of its invasion of Ukraine. Russia is “only” the world’s 6th-largest producer and 12th-largest exporter of uranium, but Russian nuclear energy champion Rosatom has achieved a dominant role in the world nuclear power market by bundling nuclear fuel with technology, design, capital, and waste management. Its global nuclear empire spans 73 ongoing or planned reactor construction projects across 29 countries, with the value of the largest projects running into the tens of billions of dollars. The largest (planned) project is in South Africa and has an impressive price tag of US$76 billion.

However, the prospects for Russian nuclear exports may not be so rosy after all. It is one thing to continue buying fossil fuels from Russia in the short term to navigate the immediate energy-market impacts of the invasion. However, it is difficult to imagine that any Western or Western-leaning country would want or dare to enter into cooperation with Russia in the nuclear sector in the foreseeable future. Finland, for instance, can- celled its Russian project at Hanhikivi in May 2022.

It is possible that American, French, or Japanese companies could fill the gap left by the Russians in the international nuclear power market, but the Chinese might be able to make better offers. Again, however, it is a moot question whether any Western-oriented country would like to enter into deep cooperation with the Chinese in the nuclear sector. Thus, another scenario is that the bifurcation of the world will extend to the nuclear sector, with one international market for nuclear power dominated by China and Russia and the other by Western countries.

Germany and other European countries have been able to maintain energy-intensive industries based on a steady flow of Russian gas. These industries have been subject to growing pressure since 2018 as the price of greenhouse gas emissions allowances in the EU Emissions Trading System (ETS) has risen. Over time, it will make sense for energy industries to relocate to locations with abundant clean energy—in the form of large hydropower, wind, or geothermal resources—and, importantly, the space to harvest these resources (Overland et al. 2019). This geographical shift is widely predicted in the literature on the geopolitics of the energy transition (Vakulchuk et al. 2020). Reduced access to Russian gas should accelerate the shift. Much of Europe is no longer suitable for siting energy-intensive industries.

The main hope for avoiding industrial relocation is switching from fossil fuels to hydrogen (Van de Graaf et al. 2020). However, the decoupling of Russian gas from European industry is bad news for “blue hydrogen” enthusiasts. Their ambition is to split natural gas into hydrogen and CO2, capture the CO2, and store it underground or use it as an industrial feedstock. Russia could play a key role in this market: It has the world’s largest gas reserves, depleted oil and gas fields that could be used to store CO2, and a vast network of pipelines that could possibly be repurposed to transport hydrogen to the EU. With Russia missing in action, the prospect of a blue hydrogen boom may come to depend on natural gas from more remote suppliers such as Australia, Qatar, and the United States, in which case it will be necessary to liquefy the hydrogen for transportation by ship. This will substantially reduce the energy return on energy invested (EROI), as hydrogen has to be cooled to −253°C to achieve liquefaction, rather than −163°C like natural gas. Liquefied hydrogen also suffers from a higher rate of boiloff. The resulting lower efficiency/ higher price will further weaken blue hydrogen in the race against green hydrogen made with renewable energy and electrolysis. Green hydrogen can be produced locally in the EU or in North Africa and transported by pipe- line. However, green hydrogen is unlikely to represent a cure-all for the relocation of energy-intensive industries from the EU.

Russia has never been a driving force of international climate policy. However, it is the world’s fourth-largest emitter of greenhouse gases, and its involvement therefore matters. On the one hand, given the schism between Russia and virtually all pro-climate countries in the world, it is now difficult to imagine cooperation with Russia on international climate policy. On the other hand, if Russia seeks to break out of isolation at some point in the future, climate policy could be one of the very few areas where Ukraine’s supporters might be willing to have any contact with Russia at all.

What about decarbonization in Ukraine? Although its emissions are far smaller than those of Russia, Ukraine is the world’s 26th-largest emitter and thus not insignificant. It had already started moving toward green energy before Russia expanded its attack on Ukraine in 2022. Ukraine will now expectedly double down to minimize its reliance on Russian fossil fuels and also work hard to join the EU—where clean energy is a major focus (Stavchuk and Savytskyi 2022). Previously, Ukraine was held back by powerful oligarchs in the energy sector, pervasive corruption, and a weak state—all actively fomented by Russia. Decoupled from Russia and with a newfound sense of national unity and trust among societal groups and the state, Ukraine should have a good chance of accelerating its transition away from Russian fossil fuels and dominance.

Indra Overland is Research Professor and Head of the Research Group on Climate and Energy at the Norwegian Institute of International Affairs (NUPI). His recent publications include Russian Oil Companies in an Evolving World: The Challenge of Change (Edward Elgar, 2020), “Is this Russia’s Kodak moment?” (Oxford Energy Forum, 2021), and “Villain or victim? Framing strategies and legitimation practices in the Russian perspective on the European Union’s Third Energy Package” (ERSS, 2021).

This analysis was first published in Russian Analytical Digest No. 284, 08 June 2022.

The Russian Analytical Digest (RAD) analyses recent events, trends and developments within contemporary Russian politics, economics and business, foreign policy, security and society. Each issue contains original academic and policy relevant research articles by authors from across the globe, and topical statistical data, graphics and opinion polls. The series is produced by a partner network that includes the Center for Security Studies (CSS) at ETH Zürich, the Research Centre for East European Studies (FSO) at the University of Bremen, the Institute for European, Russian and Eurasian Studies (IERES) at the George Washington University, the Center for Eastern European Studies (CEES) at the University of Zurich, and the German Association for East European Studies (DGO).