Russia's government approved a long-term roadmap in March for building up its LNG export industry, setting its sights on a 20% share of the global market for the super-cooled gas by 2035. But how many of these projects are realised will depend greatly on how much support Moscow is willing and able to afford them.

The pandemic and accelerating decarbonisation efforts have led forecasters to dramatically alter their assumptions for long-term global oil demand. But the consensus is that the outlook for gas consumption remains robust, with growth driven by soaring use in Asia and in other areas.

In its latest Stated Policies Scenario, the International Energy Agency (IEA) projects that global gas demand will rise from just over 4 trillion m3 in 2019 to 4.6 trillion m3 in 2030 and 5.2 trillion m3 in 2040, primarily thanks to soaring usage in Asia, but also gains in the Middle East and Africa. Meanwhile Shell sees LNG demand almost doubling to 700mn mt by 2040, as Asian economies swap coal and other fuels for gas in the power sector.

Russia is anxious to develop export projects in time to meet this growth, wary of competition and a post-2040 slowdown in gas demand due to the rise of renewables. In its roadmap, the government points to the country's low costs and abundant gas reserves, estimated by BP at 38 trillion m3 proven, viewing Qatar, Australia and the US as its main competitors. It estimates it can supply LNG to the global market at a cost of $3.7-7.0/mn Btu.

"This is higher than Qatar's costs but looks attractive against most other players," Richard Gorry, managing director of JBC Energy Asia in Singapore, tells NGW. "For example, US LNG's general pricing basis is Henry Hub plus a 15% tolling fee. Henry Hub of around $2.6/mn Btu, already very low, would imply a breakeven price around the $6 mark and that would be before shipping."

There are over a dozen more mid- and large-sized projects at various stages of planning and development. But the Russian government acknowledges that there is a lot of uncertainty about if and when some of these projects might reach first gas. In its high-end scenario, the government projects that production could rise to 65mn mt by 2024, 102.5mn mt by 2030 and 140mn mt by 2035. But in its low-end scenario, it sees supply only reaching 46mn mt by 2024, 63mn mt in 2030 and 80mn mt in 2035.

Novatek is due to launch a 0.9mn mt/yr fourth train at its Yamal LNG later this year – considered a key project as it will showcase the company's proprietary Arctic Cascade liquefaction technology. So far, Russia has had to rely on foreign partners to provide such technology. The train was originally scheduled for commissioning before the end of 2019, but its launch has been postponed as a result of the pandemic, and, according to Russian press reports, operational complications.

Another small-scale project on the way is Gazprom's 1.5mn mt/yr Portovaya LNG plant in northwest Russia, slated to come on stream later this year.

Next up will be Novatek's 19.8mn mt/yr Arctic LNG-2 facility, located on the Gydan peninsula, whose three trains are due to launch production in 2023, 2024 and 2026. The company's 5-6mn mt/yr Obsk LNG project should start up in 2024, but unlike Arctic LNG-2, it has not reached a final investment decision (FID) yet. Novatek hopes to take this step in 2021, a year later than originally planned. The Moscow-based Kommersant newspaper reported in March, citing sources, that Novatek was considering dropping plans to use Arctic Cascade at Obsk LNG, because of the aforementioned difficulties at the fourth Yamal LNG train. It may opt for technology provided by Germany's Linde instead, according to the newspaper.

There are several other projects that the government views as "likely" to start operations before 2030, including Gazprom's 13.3mn mt/yr Ust-Luga plant in northwest Russia, slated for launch in 2024-2025. That project too has encountered difficulties, with Gazprom and its development partner Rusgazdobycha recently cancelling an engineering, procurement and construction (EPC) contract for its processing facilities that had been awarded to Russia's Nipigaz. 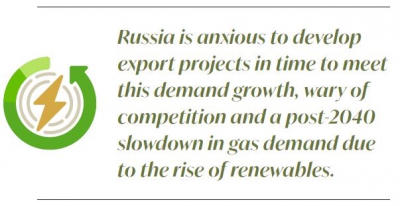 Gazprom explained it was seeking to "optimise" project costs, although the contractor claimed the developers had not arranged financing for the scheme, nor decided how much of its equipment and technology should be localised. Nipigaz added that there were "discrepancies" in the risk assessment and in how risks should be shared between contractor and client. Nevertheless, Gazprom insists that project work is on schedule.

There is also Novatek's 19.8mn mt/yr Arctic LNG-1 project, expected to arrive in 2027, and the 17.7mn mt/yr Yakutsk LNG project in the Russian Far East, led by the privately-owned Yakutsk Fuel and Energy Co. (Yatek). Rosneft and ExxonMobil's 6.2mn mt/yr Far East LNG plant has a predicted launch of 2027-2028.

The government considers Novatek's 19.8mn mt/yr Arctic LNG-3 and a 5.4mn mt/yr expansion at Sakhalin-2 as "possible" projects to be completed within the next decade. Gazprom also has early-stage plans for 0.5-1.5mn mt/yr and 1.5mn mt/yr projects on the Black Sea and Far Eastern shores, considered possible before 2025.

Support from on high

The success of Russia's LNG export drive will depend greatly on how much fiscal and regulatory support the government is prepared to give to projects.

Novatek's flagship Yamal LNG was completed in December 2017 on time and within its $28bn budget. The project was founded on strong economics, but would not have been realised without the backing of the state. While most of Yamal LNG's cost was covered by its shareholders and Chinese lenders, Russia's sovereign wealth fund and state banks also contributed over $7bn. Furthermore, the government assisted in developing necessary project infrastructure.

During its 12 years of operation or until it has produced 250bn m3 of gas, Yamal LNG will be exempt from mineral extraction tax (MET) and property tax and will enjoy a reduced rate of 13.5% profit tax. It will also pay no export duties on its LNG, and receive additional regional tax breaks.

"This level of support is absolutely going to be required for future projects," Ronald Smith, analyst at BCS Global Markets, tells NGW. "Russian producers are extremely heavily taxed. The tax code takes so much rent out of the average barrel, that to get a new field up and running the government has to extend some breaks at the front end of it."

Ekaterina Rodina, an analyst at VTB Capital, notes that not all LNG projects will receive the same level of support as Yamal LNG and Arctic LNG-2.

“Baltic LNG in Ust-Luga is one such example, which doesn’t have such a reserve base and buys dry gas from Gazprom at a certain price, which also includes the MET paid by the gas producer,” she tells NGW, although noting that the LNG itself enjoys zero export duties.

As these tax breaks are typically won through political lobbying, helping to explain why only Russia's biggest and most influential oil and gas companies have proposed projects, with Yatek in the Far East as the exception. This is likely to remain the case. According to Smith, other companies face a "political barrier" and must also have a sufficient balance sheet to get financing moving.

Novatek has made considerably greater progress in LNG than Gazprom and Rosneft for several reasons. As NGW has noted in the past, the company's relatively small size, strong management and laser-sharp focus on LNG work in its favour.

Gazprom, in contrast, has "conservative corporate culture" and has placed most of its attention on export pipeline development, Smith notes. While advancing its LNG plans in Ust-Luga, Gazprom is also working on the construction of a second pipeline to China via Mongolia that will carry much greater volumes of gas. Meanwhile Rosneft is looking to expand in multiple areas besides LNG, from refining and petrochemicals to upstream operations overseas.

Russia has made some progress in localising more of the equipment and technology it uses in LNG development over the years, although it still has some way to go.

“In large-capacity LNG projects, we believe Russia still significantly relies upon international technologies,” Rodina notes. But at small and medium-scale LNG projects, Russia has developed expertise from the work at Vysotsk LNG and the fourth Yamal LNG plant, she says.