Japan is battling its worst energy crisis in recent history that has exposed its energy security vulnerability, as scorching weather and surging oil and gas prices have led to spiking electricity rates, prompting calls from the Japanese government for residents to conserve power.

Japan is extremely dependent on imported energy, with more than 90% of domestic consumption reliant on foreign oil and gas. The world’s fifth-largest oil consumer and six-biggest gas consumer is reeling from the effects of higher energy prices, combined with a slump in the value of the Japanese yen to 20-year lows and Moscow’s shock nationalisation of the Sakhalin 2 LNG and oil project in the Russian Far East.

Japanese electricity prices in June traded at a record high for the time of year, with day-ahead rates on the Japan Electric Power Exchange up by more than elevenfold from a year ago amid one of the country’s worst heat waves on record. The country issued a power supply warning for the first time in March, after supply neared critical levels in Tokyo following an earthquake, leading to a higher burden on power retailers and end-users.

At the end of last month the Ministry of Economy, Trade and Industry (METI) issued an unprecedented four daily advisories in a row that called for households and businesses in Tokyo to curb electricity usage due to the hot weather. The ministry warned the capital city’s electricity demand was running at the highest since the aftermath of the Tōhōku earthquake and tsunami in 2011.

Japan’s electricity demand has now returned to pre-COVID levels last seen in 2018. Cold temperatures and snowy weather in January and February first drove up electricity demand, which was then followed by the earthquake in mid-March that took several thermal power plants offline. This led to an extremely tight supply-demand balance and risk of blackouts in Tokyo.

The tight balance is set to persist until at least August given forecasts of more heat waves that have already broken temperature records dating back to 1875. Along with higher fuel prices, the power supply tightness has contributed to soaring electricity prices.

Japan has been hit hard by elevated oil and gas prices due to its heavy reliance on fuel imports. High fuel prices – exacerbated by Russia’s invasion of Ukraine – are boosting power prices. But the Japanese government has been hesitant to immediately cut energy supply from Russia and has declined to pressure the Japanese owners of Russia’s LNG projects to withdraw,  in order to avoid paying for even more expensive LNG.

Tokyo’s ambivalence has enabled Japanese companies to maintain ties with Russia’s upstream LNG projects in contrast to withdrawals by most Western IOCs. But this position has been complicated by the Kremlin’s move to seize control of the internationally-run Sakhalin 2 project. Japanese trading houses Mitsui and Mitsubishi hold 12.5% and 10% stakes respectively in the 9.6mn metric tons/yr export facility. 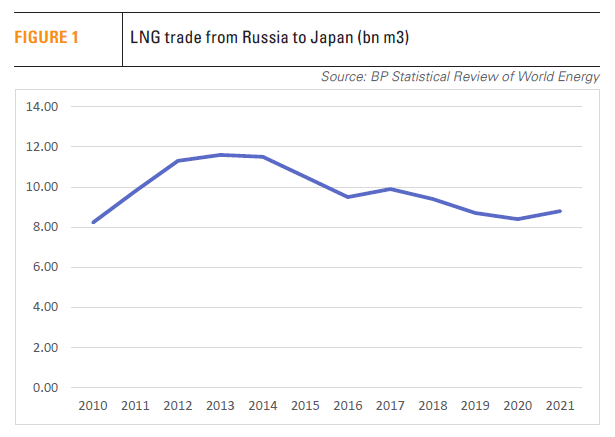 Also at risk of similar action is Sakhalin 1, which has supplied Japan with crude oil since 2006 and produced 220,000 barrels/day of crude oil before sanctions were imposed after Russian forces entered Ukraine. Japan owns a 30% stake through a consortium comprising oil producers Inpex and Japex, METI, power utility Itochu and conglomerate Marubeni.

The nationalisation has potentially huge ramifications for various sectors across the Japanese economy by threatening to cut off a crucial source of inexpensive gas supplies. Russia supplied 6.57mn mt/yr of LNG to Japan last year – making up about 9% of Japanese gas demand – and almost all of this was sourced from Sakhalin 2.

The price of the LNG volumes from Sakhalin 2 to Japan are oil-indexed. Assuming a slope of 11%, Japan is paying around $11/mn Btu for cargoes, which is significantly cheaper than East Asia’s Japan Korea Marker price benchmark of $36-37/mn Btu presently.

Japanese gas utilities, gas-fired power producers, chemical companies, and glass and steelmakers are all in line for massive inflation in their energy bills if the pricing formula changes in the wake of Russia’s tightening grip over the Sakhalin projects.

The Japanese government is understandably keen to maintain the country’s interest in the projects but the next steps in the process are unclear. Tokyo has not yet received word that a new Russian company set to operate Sakhalin 2 has been established, industry minister Koichi Hagiuda said in mid-July. Tokyo’s ability to maintain its stake is also uncertain as Moscow will have the final say about the continuation of investments by Japanese companies.

The nationalisation comes after the state-owned Japan Bank for International Cooperation froze funding for Novatek’s $21.3bn Arctic LNG 2 development, which was mainly targeting East Asian markets including Japan, China and South Korea. Mitsui and state-owned Jogmec jointly hold a 10% stake in the project.

Despite the reluctance to divest from Russian gas, Tokyo is still working to ramp down its dependence on Russian coal and oil. In April the government announced a gradual ban on Russian coal imports, which will force Japan to seek out alternative coal suppliers such as Australia or rely more on pricier fuels.

This was followed in early May by the announcement of a gradual ban on Russian oil imports. The impact on Japan’s oil supply will likely be manageable since Russian volumes made up just 3.6% of Japanese crude imports last year.

Shifting away from Russian fossil fuels is one of the key pillars in the Clean Energy Strategy that prime minister Fumio Kishida’s administration is developing. METI released an interim report of the strategy in mid-May that called for $1.10 trillion of investment in decarbonisation over the next decade, but the document was criticised for lacking detailed measures. The finalised document is scheduled to be released in December.

While energy market volatility has impacted Japan significantly, the country has no other choice but to buy at current rates given the country’s high dependence on imported energy. With little alternative, Japanese electric utilities have had to dip into the Asian spot market to keep LNG-fired power plants running in order to meet booming electricity demand.

Regional spot LNG prices are holding at a seasonal high, inflating the LNG procurement costs of Japanese buyers. LNG import costs of Japan’s power utilities were up by an average of 68% in the first two months of this year from the same period in 2021, according to finance ministry data.

Japanese utility Jera – the country’s biggest LNG buyer – did not renew 5.5mn mt/yr of legacy LNG supply contracts with Qatar Energy after last year and is instead relying to a greater extent on expensive spot LNG. Other utilities such as Kyushu Electric – which have a surplus of long-term contracted supply – have been better shielded against the hike in spot LNG prices.

Japan’s LNG imports this year are projected to reach 70.4mn mt, down by 4% from last year, according to BloombergNEF. Summer demand from April to September is expected to remain steady year-on-year, as initial forecasts of higher nuclear availability now look overly optimistic due to prolonged outages at Kyushu Electric’s Genkai nuclear power plant. 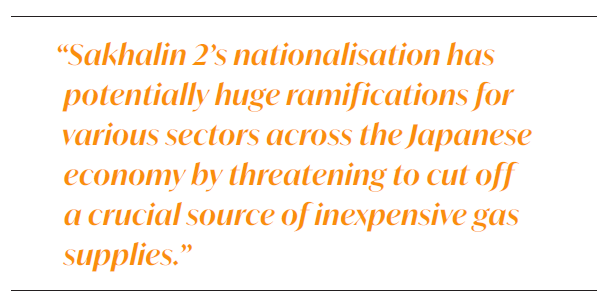 The prospect of an exceptionally hot summer could provide further upside to LNG imports, boosting them by a further 0.5mn mt as Japanese households and businesses crank up air conditioning use. The Japan Meteorological Agency warned at the end of May of a 50% chance of above-average temperatures this summer.

Japanese utilities also whittled down their LNG stockpiles amid the cold weather earlier this year, with inventories below the four-year average. The need to rebuild stockpiles will likely boost imports in the run-up to this winter, despite LNG prices holding at a seasonal high.

This stock-building will take place amid an expected tightening in the Asian LNG market following the explosion at the Freeport LNG export terminal in June. Jera, Osaka Gas and Kansai Electric all have offtake agreements with the 15mn mt/yr facility, which LNG traders expect to be shut for at least three months.

Japan has been maximising coal use in its power generation, with utilities stockpiling the fuel in anticipation of this summer’s hot weather. Japanese thermal coal demand is expected to grow by 4% year-on-year to 117mn mt in 2022, as the commissioning of new coal-fired capacity will boost coal power generation and thermal coal imports.

Some 2.7 GW of coal-fired power capacity across three plants built by Jera, Chugoku Electric and Kobe Steel looks set to come online this year. This will be partly offset by the retirement of 1.6 GW of capacity that has been operating for more than 45 years.

In the long run Japan’s tight supply-demand balance will persist for the next few years. Net retirements of gas power plants are set to continue this year with the announcement that Jera is shutting down 3.8 GW of capacity already on standby at the Oi, Yokohama and Chita gas power plants. Coal capacity is set to grow in 2022-2023, with 2.3 GW of net capacity additions scheduled in the next two years.

Nuclear power generation is set to almost double year-on-year in 2023 after expected low nuclear generation this year on the back of anti-terrorism retrofitting work for two reactors at Kyushu Electric’s Genkai power plant. This recovery in nuclear generation will put downward pressure on expensive gas generation.

Gas burned for power generation could decline by as much as 18% in 2023 from this year, according to BloombergNEF. Coal generation is set to remain stable next year on the back of new builds cancelling out potential plant retirements. Despite high LNG prices, gas-to-coal switching will be unlikely as coal power plant utilisation is already high.