The Russian market for natural gas as a vehicle fuel, while still considered a niche, is gaining momentum. Its growth is assisted by support from the government, which has both environmental and economic reasons for expanding the use of natural gas vehicles (NGV). The country’s largest gas supplier Gazprom also has a vested interest in seeing the market grow.

Obstacles remain, namely a lack of compressed natural gas (CNG) and LNG filling stations, but the government and Gazprom are working to expand the network to make NGVs a more feasible option for transport.

Consumption of CNG and LNG in Russia’s NGV fuel market has been rising steadily in recent years and the Covid-19 pandemic has not checked this growth. Demand grew by 10% to 1.1bn m3 in 2020, Ivan Timonin, an analyst at Moscow-based Vygon Consulting, tells NGW, while consumption of gasoline and diesel declined by 5.6% and 6.7% respectively in the same year, owing to restrictions on movement put in place to stem the virus’ spread. 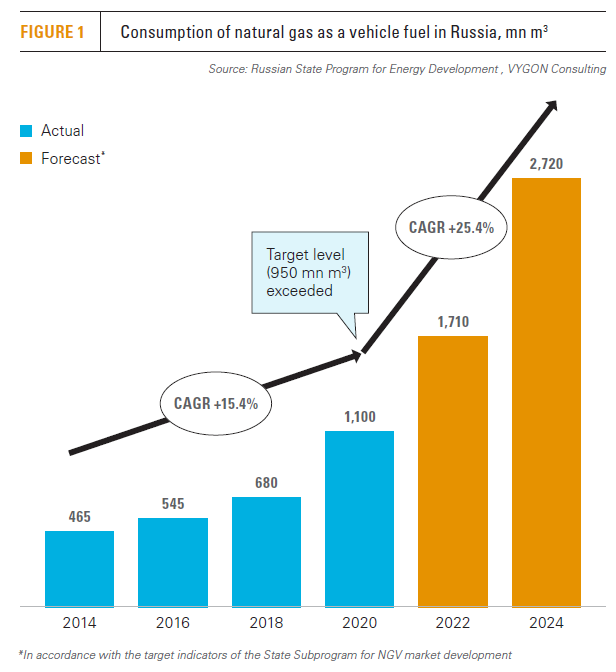 “This trend will definitely continue in the coming years due to the economic efficiency of NGVs, the development of the filling station network and active government support,” Timonin says. The targets set in Russia’s energy strategy – consumption reaching 2.7bn m3 by 2024 and 10-13bn m3 by 2035 – are “quite achievable,” he says.

Motorists have a clear incentive to switch to CNG given the low cost of the fuel. The average price of CNG in Moscow is currently around 20 rubles ($0.27)/m3, while a litre of diesel, which has almost the same energy content, costs 49.5 rubles, and a litre of 92 RON gasoline sells for about 45.5 rubles, according to Vygon. Gazprom estimates that converting vehicles to natural gas can reduce fuel costs by up to 60%.

The government has also offered a range of subsidies to vehicle owners, infrastructure developers and automakers alike to support the sector’s development. The state’s interest in expanding NGV use is both economic and environmental, Timonin explains.

“Transportation costs are present in most supply chains and consequently, their reduction will increase the competitiveness of Russian manufacturers across almost all sectors of economic activity,” the analyst tells NGW. “At the same time the exhaust gases of a methane-fuelled engine contain two-three times less carbon monoxide and two times less nitrogen oxide, which contributes to the achievement of national and global environmental goals.”

In the case of passenger cars, for example, the government provides a subsidy that shaves 40% off the cost of converting them to run on CNG. Meanwhile Gazprom, by far the largest operator of CNG filling stations in Russia and eager to create extra demand for its gas, covers a further 30% of cost. This means that a motorist can make back what they spend on converting a gasoline-fuelled Lada Vesta, a popular Russian-made car, in just over 11 months, assuming 15,000 km of annual mileage, Vygon estimates.

The government’s support is comprehensive, Timonin says. They also extend to the manufacturers of NGVs as well as the operators of LNG and CNG filling stations. The analysts estimates that subsidies offset 25-40% of the capital cost of constructing new filling stations.

“This amount is significant enough to make such projects economically attractive,” he says.

The main hurdle to overcome is infrastructure constraints, according to Vygon. There are currently only 530 CNG stations in Russia, owned mostly by Gazprom and largely situated in European Russia, as well as a handful of LNG facilities in the country. They are outnumbered by conventional filling stations by a ratio of 50 to 1.

“This is what stops the majority of potential consumers from switching to methane, which, in turn, limits the possible growth rate of the NGV market as a whole.”

Gazprom is spearheading efforts to expand the network, however. Gazprom and its Gazprom Gazomotornoye Toplivo subsidiary already operate just under 330 CNG filling stations between them, according to the company’s website. Gazomotornoye Toplivo has 294, having added 130 over the past five years. But it wants to accelerate the pace of development, with plans to add 200 more in the next two years, the Moscow-based Vedomosti newspaper reported on April 22 citing sources. According to the newspaper, it is offering franchise deals to realise this ambition. Gazomotornoye Toplivo is finalising contracts with private investors for three facilities that will operate under its brand in the regions of Tatarstan and Krasnodar, Vedomosti said.

While Gazprom has dominated the market for CNG as a vehicle fuel, the franchise plan suggests it is aware that it cannot grow the sector on its own. Meanwhile, its rivals also want a slice of the market. Rosneft sells CNG at 14 of its filling stations mostly in central Russia and its CEO Igor Sechin said in August last year that the company wanted to add four more in the Moscow region, without disclosing a timeframe for their completion.

The government’s strategy envisages an expansion in the CNG filling network to over 1,720 stations by the end of 2024.

NGVs are taking off in markets across the world, mostly in developing nations, which view them as both a means of addressing emissions in the difficult-to-decarbonise transport sector and a way of spurring economic growth. However, other nations are pursuing alternatives such as hydrogen fuel cell and electric cars.

Russia has its own ambitions in hydrogen production, but they are largely export-oriented. Some Russian automakers are investigating hydrogen fuel cell vehicles such as heavy vehicle manufacturer Kamaz, which said in April it was developing a hydrogen-fuelled bus prototype. But introducing models to the market is still some way away, and infrastructure would have to be built to support their use.

Prospects for hydrogen use in transport are “highly uncertain,” Timonin notes.

“Hydrogen energy, including the transport segment, is noted in the Russian energy strategy to 2025 as one of the areas of interest, however specific targets have been set only in terms of hydrogen exports,” he says.