Russian Gas Flows Drift Lower in June vs May

The transit deal signed on December 29 last year between Gazprom and Naftogaz provides for 65bn m³ this year, divided equally between the months at 5.5bn m³/month with no intra-month flexibility. That means the most that can transit this year will be 56bn m³. 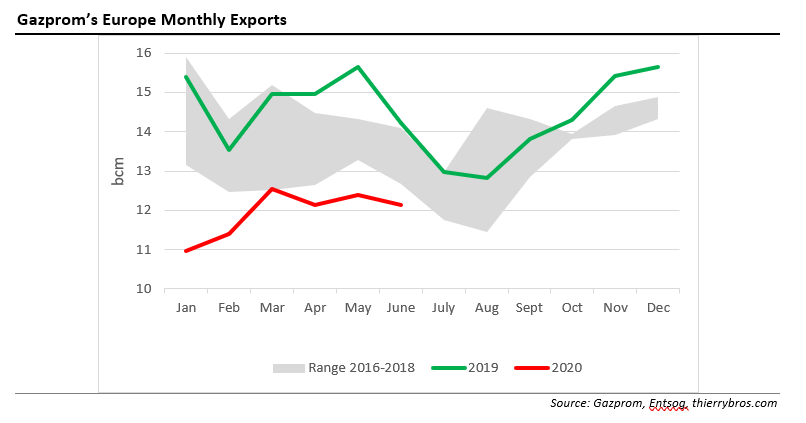 Gazprom’s flows were again down massively in June compared with last year (-14.7%) and slightly down on May (-1.9%). The coronavirus-impacted demand will continue to restrain EU imports needs. 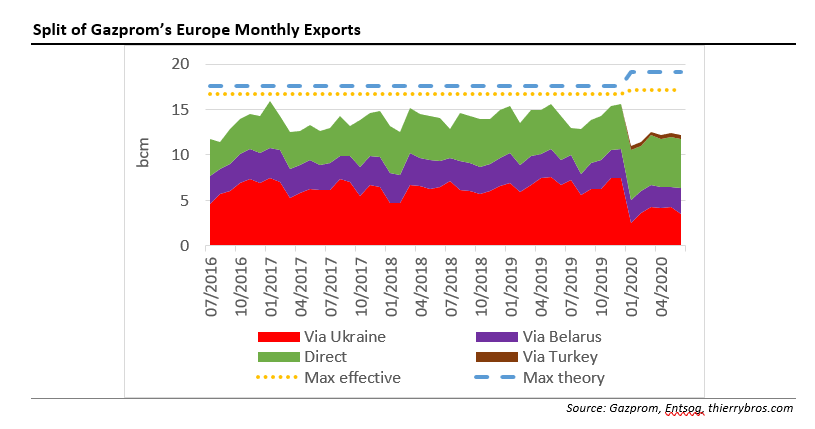 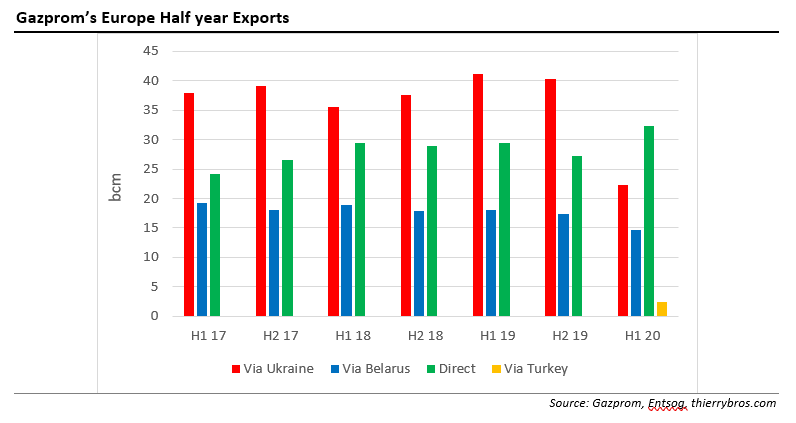 As for storage, since the 54% minimum reached on April 2, this has now risen to 72.8%. The main question left is when is storage going to reach full capacity… 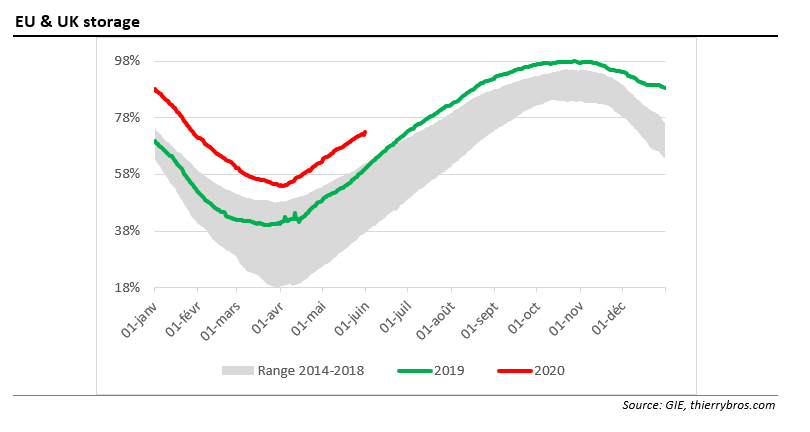 As we have been writing since early this year, Gazprom is not the only producer to swing supply any longer. For the first time ever, Gazprom may only hold half of the global spare capacity. All producers are sharing the burden of reducing volumes to the EU and this translates into less pipe gas and LNG imports. With more and more US LNG cargoes cancelled, we should expect LNG send outs to be materially below last year level during this summer.

In June, Nord Stream 2 filed a request with the Danish Energy Agency for a permit to complete its pipeline using anchored pipelaying vessels instead of the original dynamically positioned Allseas vessels now under US sanctions. It also appealed at the Higher Regional Court of Dusseldorf against the German energy regulator BNetzA’s decision May 15 to deny derogation from EU regulation[1]. With further US sanctions looming closer, my 2018 fictional saga looks now over-optimistic. Perhaps the only way out is to wait for Russia to be able to produce clean hydrogen and to use this pipe to help Germany implement its newly clean hydrogen strategy…

With the latest edition of the BP Statistical Review, we can feel that the world is changing. Not only has the major unit for measuring energy moved from an antique ton of oil equivalent (toe) to a scientific Joule (J), but the CO2 emission that used to be at the end of the spreadsheet is now at the beginning just after the primary energy data…

The good news for the EU-28 is that its primary energy consumption has reached an undulating plateau of c.69 ExaJoule since 2013 while still able to grow its economy by €2.8 trillion. Science and Innovation have managed to break the link between economic growth and energy consumption. Except for 2020, that is special due to Coronavirus, we should expect, for this decade, this undulating plateau to continue thanks to this decoupling. 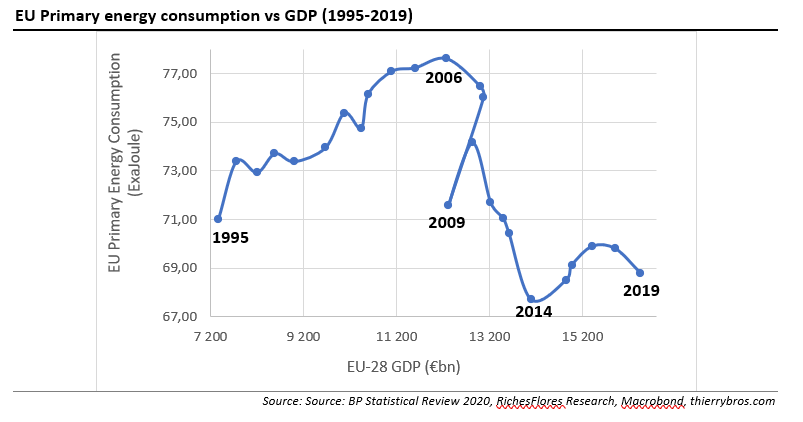 By reshuffling its Statistical Review, BP is putting even more emphasis on science and on the link between energy consumption and CO2 emissions. And here the picture is less optimistic. Yes, the EU-28 managed during those years (2013-2019) to reduce its CO2 emissions but only by 8.8% or -1.5% on a compound annual growth basis. 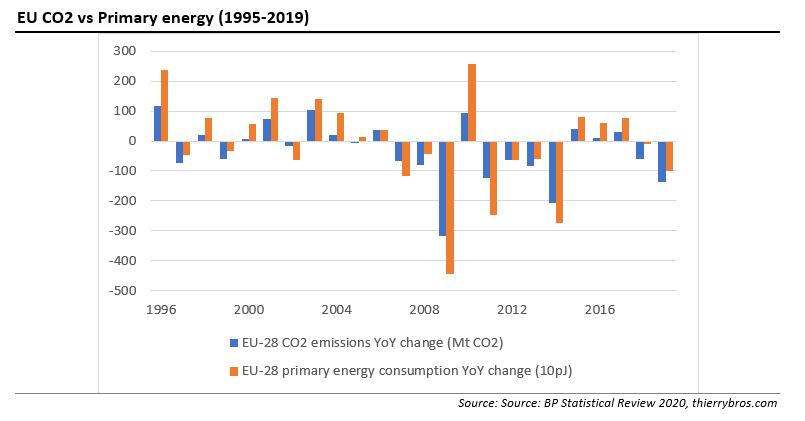 To achieve its Green Deal, the EU will need to explore all paths, including moving away from coal – which still beats renewables, at  11.2% versus 11% of the power mix – and embrace low carbon gases if it wants to continue to offer economic growth to its citizens. 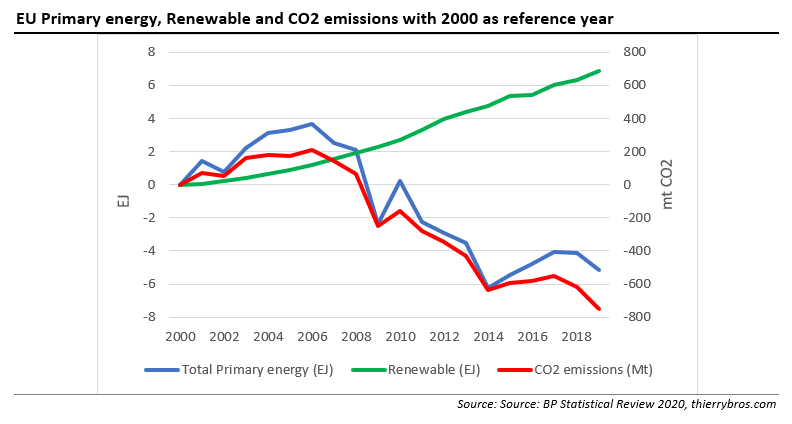 This analysis should lead to caution any magical solution where the EU could further reduce its CO2 emissions thanks to imported renewable. The track record of the last 20 years shows this is highly unlikely to work anytime soon as renewable growth is still not enough to meet world energy primary consumption… 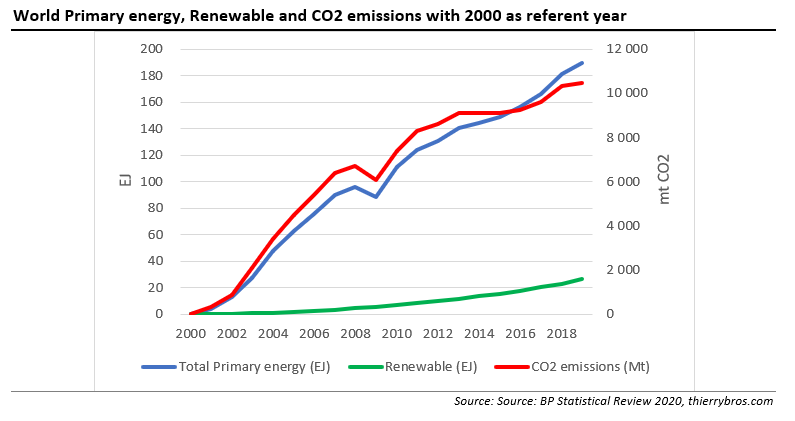 The BP Statistical Review will continue to adapt with time to reflect the energy supply-demand balance and to provide all of us with great data.