Russian president Vladimir Putin kickstarted the EU transition away from Russian gas. After having cut or reduced gas to Bulgaria, Poland, Finland, The Netherlands and Denmark in April and May, Gazprom has exploited the turbine saga at Nord Stream 1's compressor station to make further reductions to supply. Russian exports dipped to a new record low of 3.4bn m3 in August, down 7% from the previous low set in July. 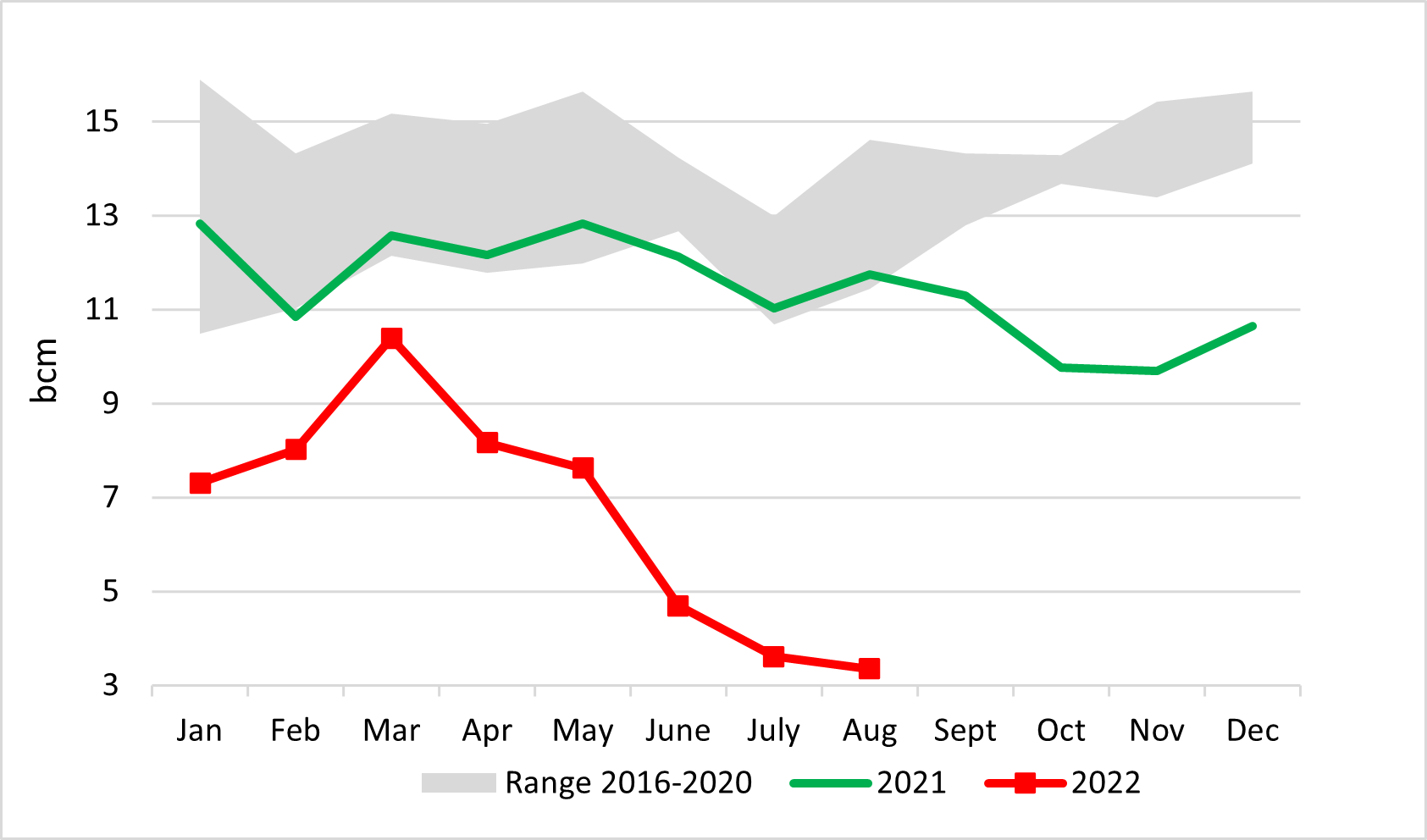 The European energy market's resilience is now being put to an extreme test, as the remaining Russian gas flow is non-replaceable. Hence we are getting even closer to system risk, unless the EU manages to act in solidarity to avoid German industry being the one to take the greatest hit. The drop in Russian flow in August mainly relates to a reduction in Nord Stream 1's supplies of 24% month/month. 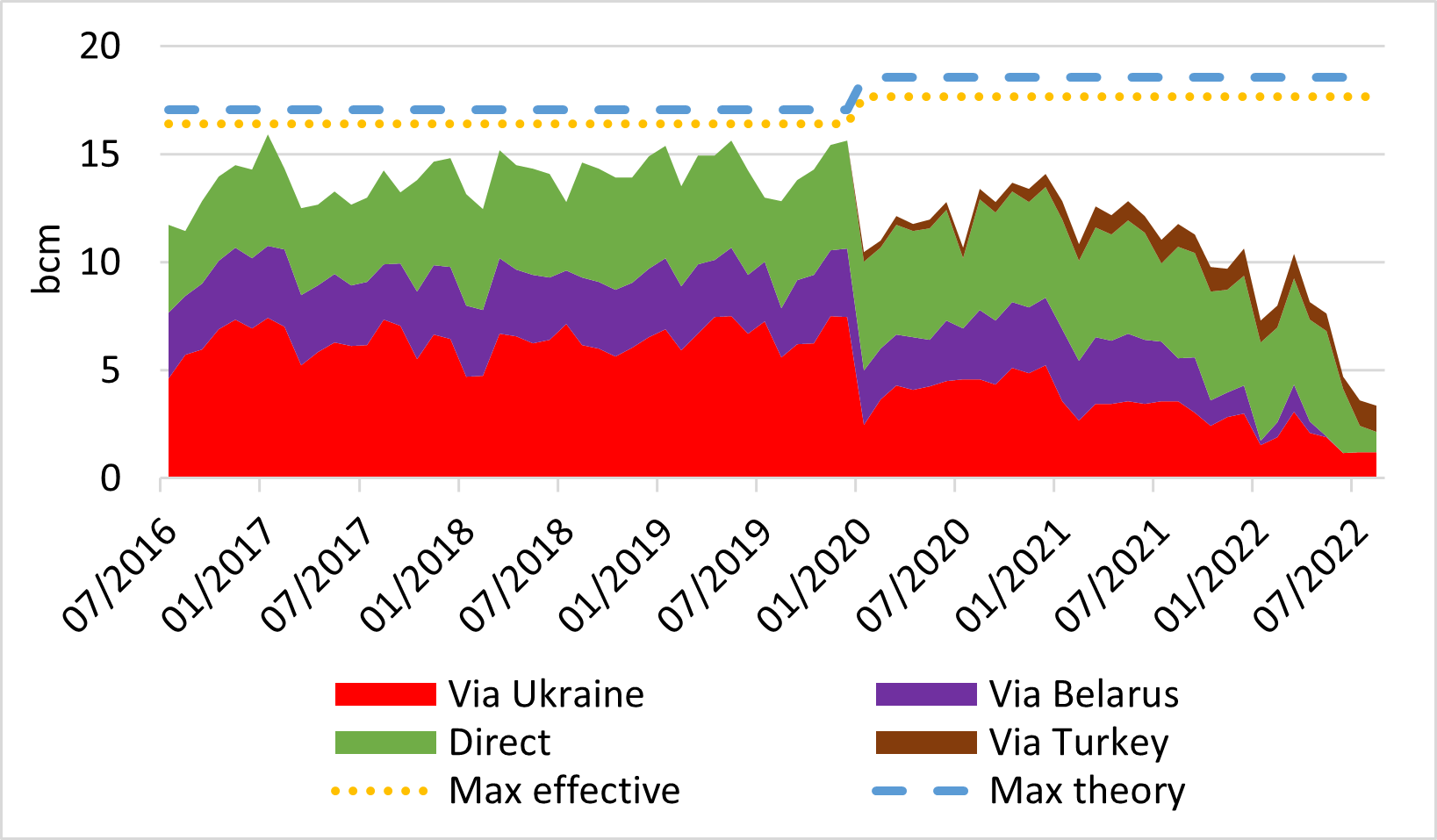 The Kremlin’s diktats are endless. Following the unforeseen Nord Stream 1 extra maintenance that started on August 31, Gazprom found an excuse to keep the pipeline fully shut until further notice.

In August, LNG send-out was 118% above last year and 96% above the historical mean. The system now has little upside flexibility to attract, if needed, additional cargoes. The limit where Russian pipe gas becomes non-replaceable is soon to be reached with Gazprom further reducing supply. 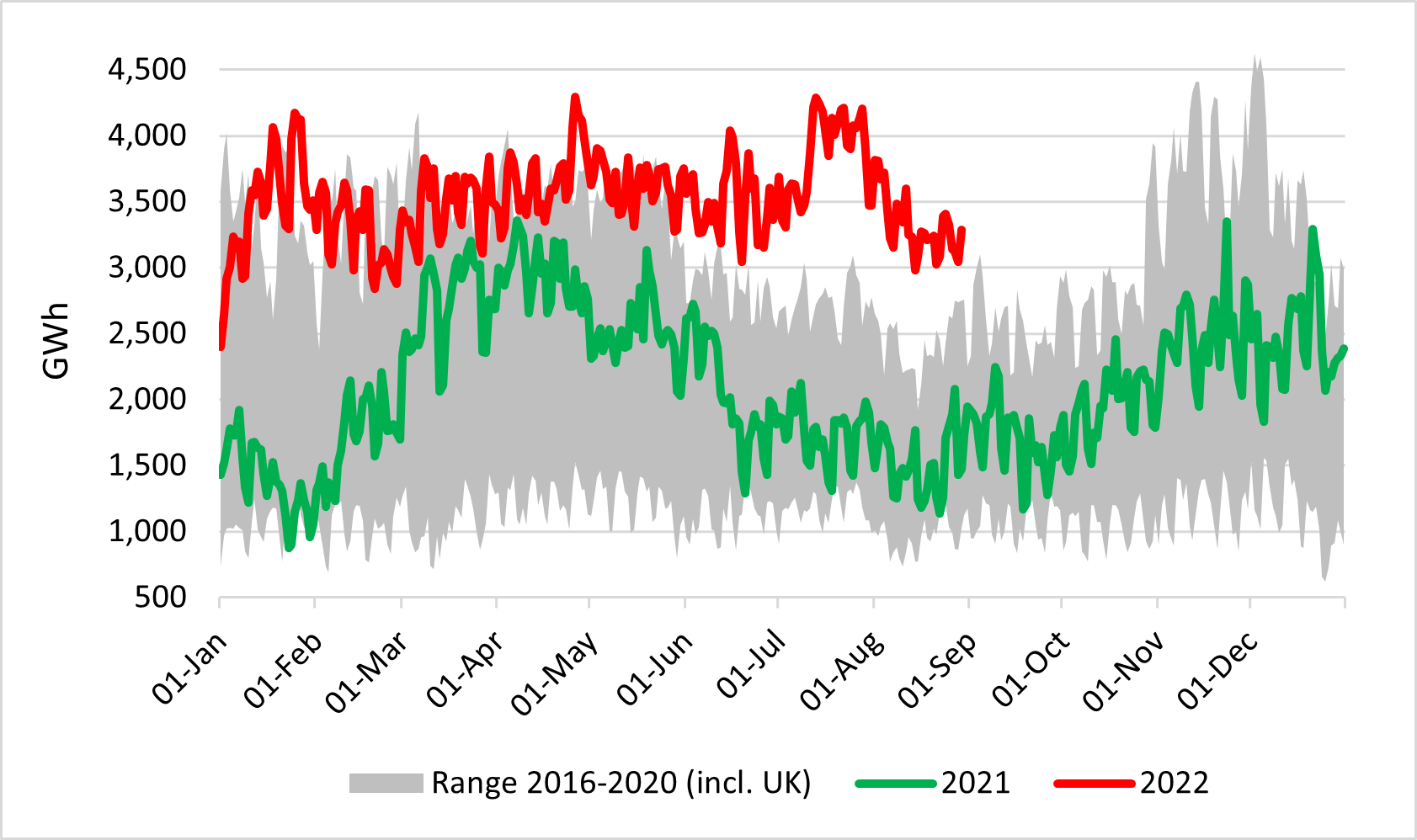 At the end of August, EU storage reached 80% but is still below the five-year average for the time of year (82%). This growth is also explained by some industrial demand destruction as more and more gas-intensive industries like fertiliser plants have to shut down. 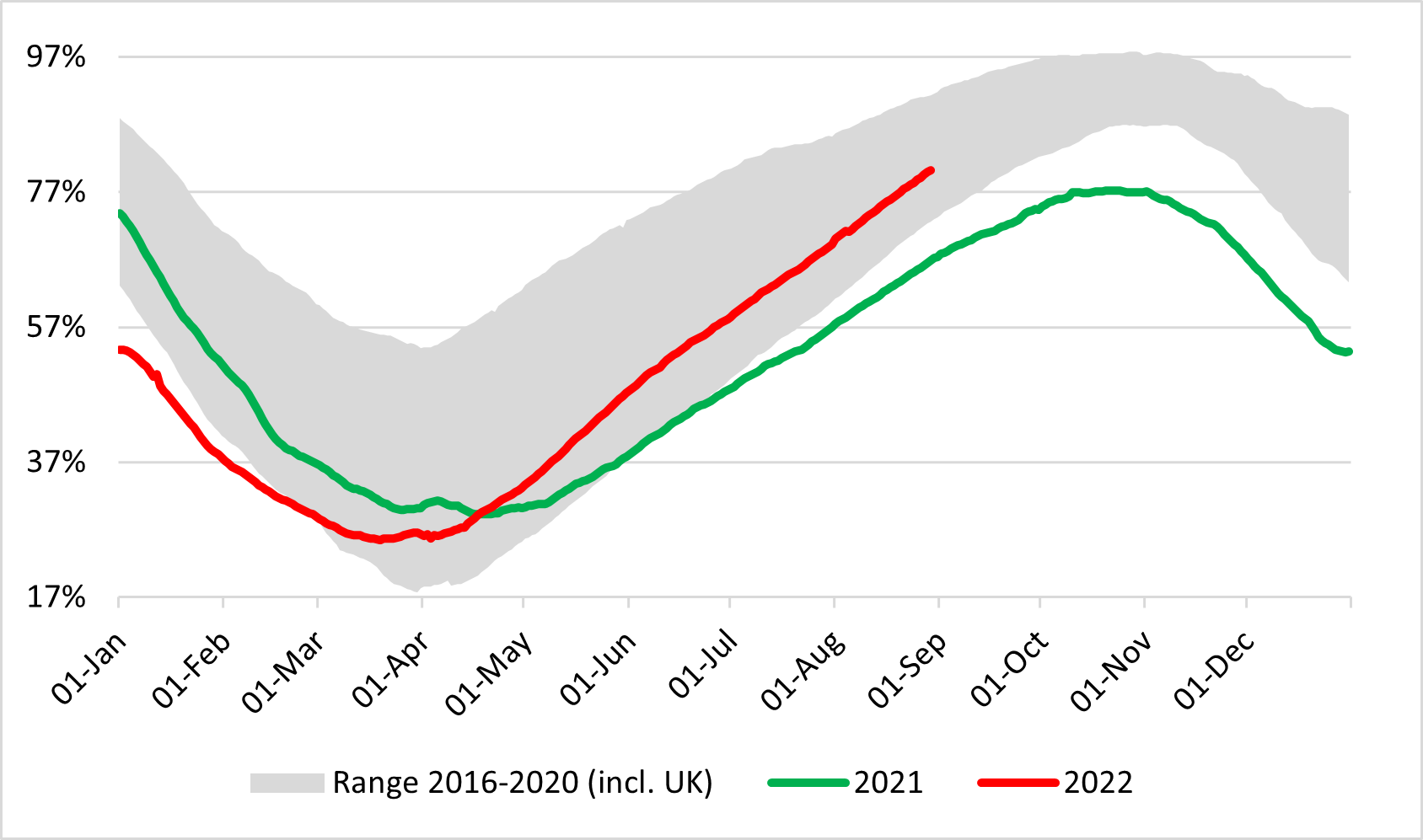 As voluntary demand-reduction measures may not be sufficient to ensure security of supply and the market continuing to function, “a new instrument introducing the possibility for a mandatory gas demand reduction for all Member States should be established. The Council could, on a proposal from the Commission, declare a Union alert.” 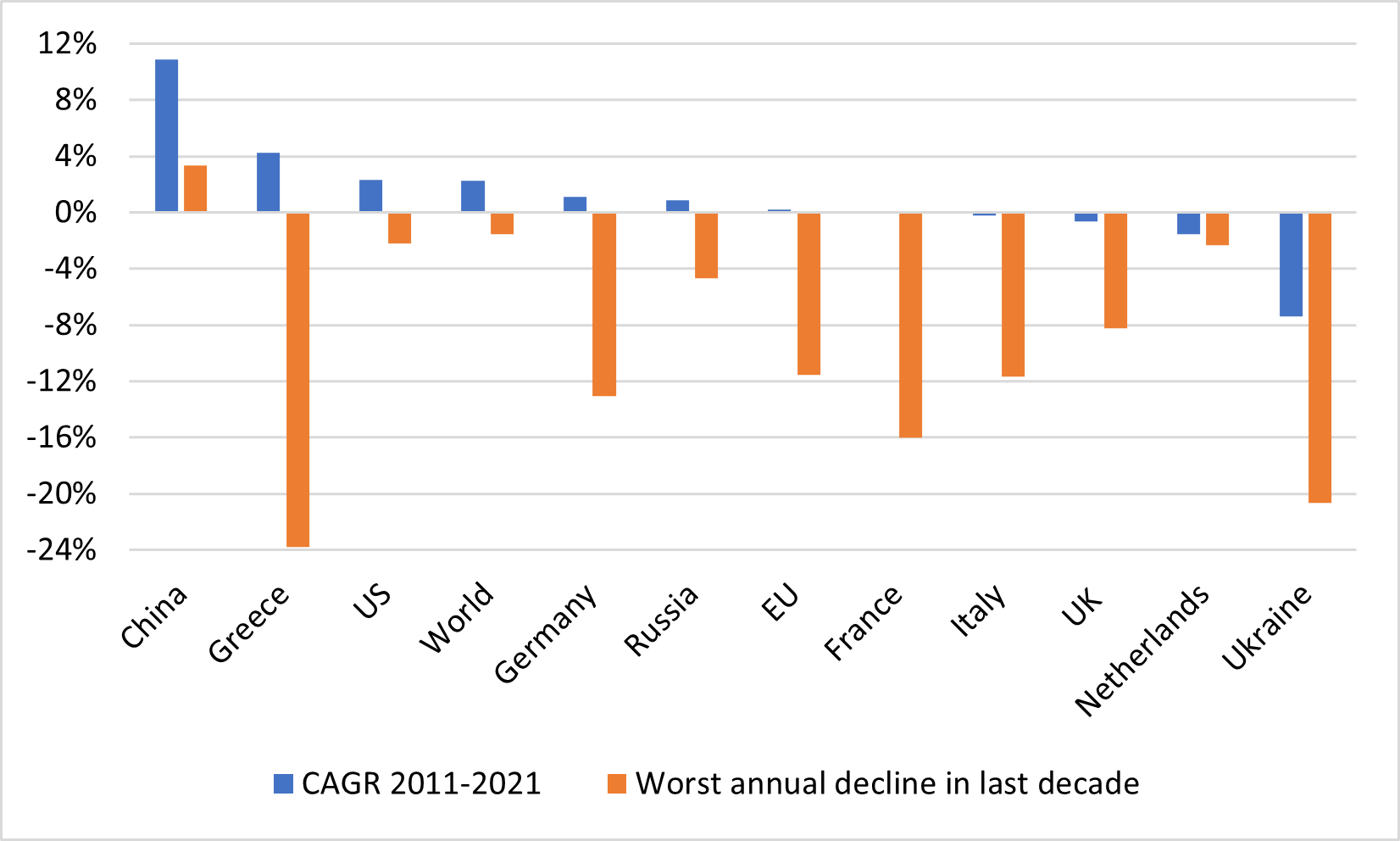 To put into perspective the challenge the EU is facing with its 15% demand reduction, we looked at demand evolution during the last decade. The world and EU demand grew by respectively 5.3% and 4.6% in terms of the compound annual growth rate (CAGR) and the worst annual declines were respectively -1.6% (in 2020 versus 2019) and -11.5% (in 2014 versus 2013) respectively.

If we now want to add the nuclear issues in France and the closure on Jan 1, 2022 of four out of seven nuclear plants left in Germany, we have to move to an analysis of the primary energy consumption. Markets already managed, in 2022, to replace most missing Russian gas [2] with LNG. This equals to around 5% of EU primary energy. If we add on top of the Russian gas that could be stopped for the EU altogether (another 5% of EU primary energy) and the nuclear issues in those two countries, we end up with: 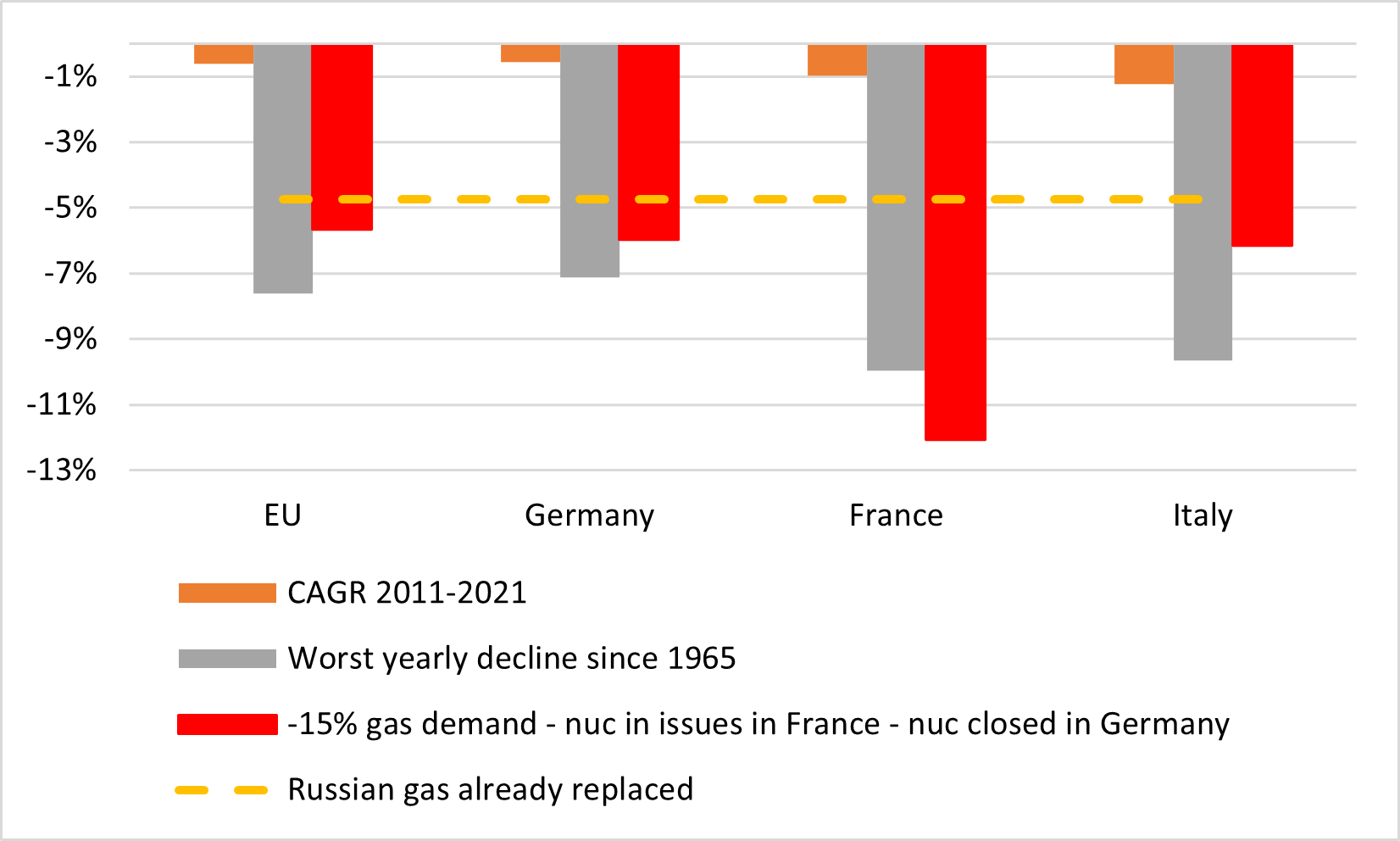 A new LNG buyer, Bulgargaz, issued a tender [3] for the delivery of LNG from Greece. Bulgaria, which was only connected to Romania and Turkey, was receiving mostly Russian gas, under a 2bn m3/yr contract that was ended in April by Russia and due to expire at the end of the year. Fortunately, it also benefitted from the willingness of the EU Commission to better interconnect all member states markets with the building of the Gas Interconnector Greece-Bulgaria[4] (IGB), which came online in July 2022[5] and allows more Azeri gas to flow into Bulgaria via the South Caucasus Pipe (SCP) and the Trans-Anatolian Pipe (TANAP). Bulgaria is now getting 1bn m33/yr of Azeri gas. As IGB's capacity is 3bn m3/yr, the remaining 1bn m3/yr missing from the Russian cut will be met by LNG berthing at the Greek Revithoussa LNG regasification terminal (used at 37% since the beginning of the war). Russian weaponisation of gas is giving a boost to LNG.

[2] With already some demand destruction