Is new Russia-China gas pipeline a threat to Turkmenistan? [GGP]

Russia’s mega-project to export its gas to China, the Power of Siberia pipeline, came online December 2. By 2024, the pipeline is expected to deliver 38 billion cubic meters (bcm) annually.

This triumph for Moscow will be greeted warily in Turkmenistan.

Turkmenistan has dominated deliveries of gas to China since the first arm of the Central Asia-China gas pipeline was completed in 2009. Turkmenistan’s gas exports to China rose from just under 4 bcm in 2010 to over 33 bcm last year, according to the BP Statistical Review of World Energy, making it China’s single-largest source of natural gas and accounting for 27 percent of China’s total gas imports. 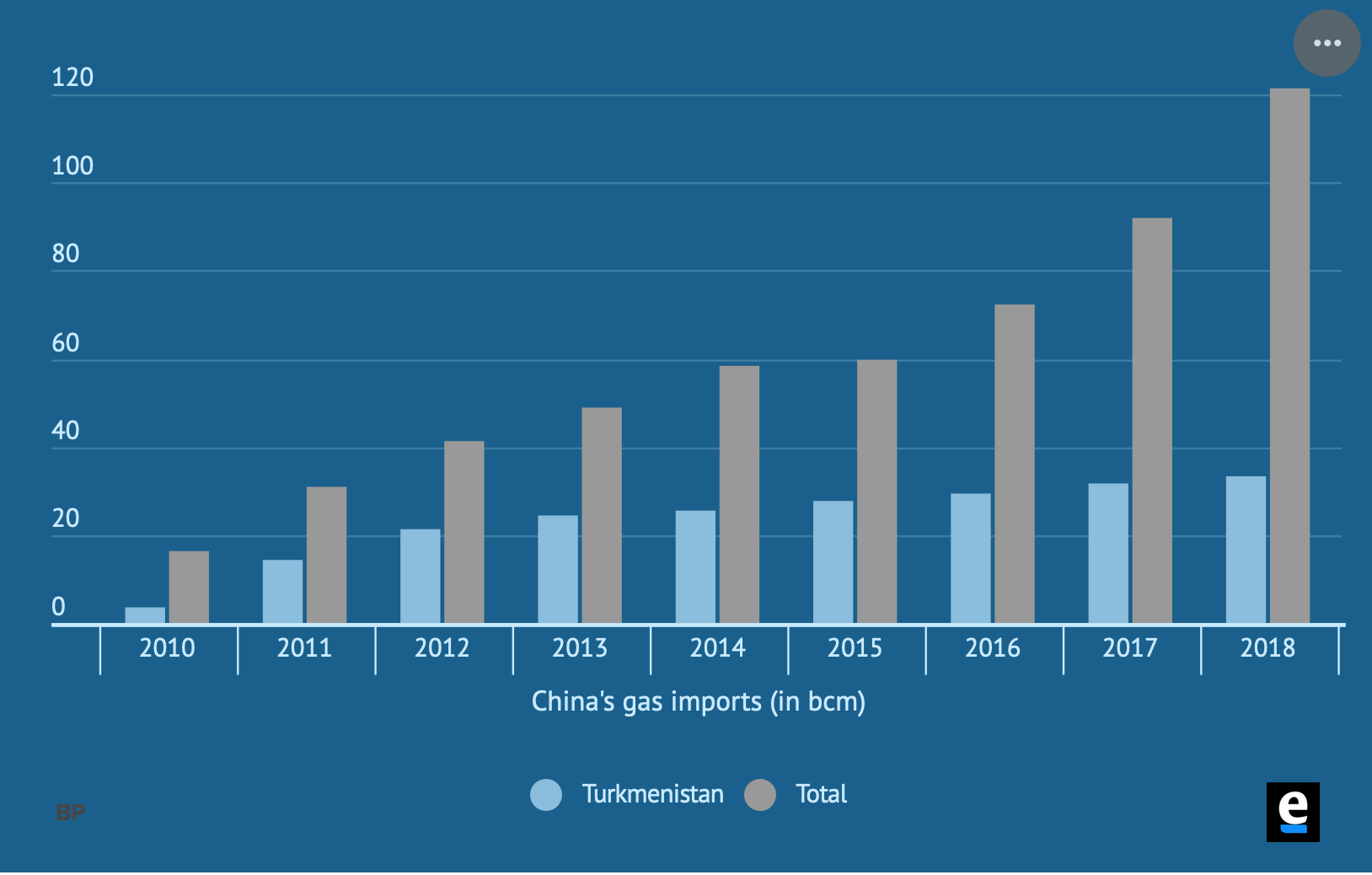 One would think this kind of monopoly over China’s gas demand would afford Turkmenistan some leverage in setting prices. But while Turkmenistan does not publicly discuss how much it earns from its sales to China, analysts reckon the price is pretty low. Also unclear is whether Turkmenistan is actually receiving cash for these gas exports, or whether the gas is swapped for Chinese arms and gas infrastructure.

In the immediate future, Chinese imports from Turkmenistan are unlikely to be threatened by the Power of Siberia, owing to continued strong demand. China used 280 bcm in 2018, according to S&P Global Platts, a figure expected to rise to 510 bcm by 2030. Moreover, the Central Asia-China gas pipeline has not reached full capacity yet. Turkmenistan could still increase its gas deliveries to China by around 5 bcm.

But Power of Siberia weakens Turkmenistan’s already poor bargaining position. Beijing’s energy relationship with Ashgabat is basically a monopsony, where its position as the only buyer affords it significant market power. (China buys almost 80 percent of Turkmenistan’s gas exports.) And with more gas flowing from Russia, China’s dependence on Turkmenistan’s gas is reduced.

While there is scope for Ashgabat to continue playing a major role in fulfilling China’s gas demand, its share will decline unless it can get new pipelines built.

That’s where Power of Siberia must really sting. The fourth arm of the Central Asia-China gas pipeline (Line D), which was supposed to be completed in 2016, appears to have been postponed indefinitely. Line D would have allowed for the transit of some 30 bcm more. To the southeast, despite regular proclamations to the contrary, there is no verifiable sign that the TAPI project, which has been planned for decades to deliver Turkmen gas to energy-deficient markets in South Asia, is progressing. Other ambitious efforts to export gas to Europe are plagued by uncertainties.

Sam Bhutia is an economist specializing in the former Soviet Union. First published by Eurasianet.org