The report, Ammonia: zero-carbon fertiliser, fuel and energy store, published on February 19, not only argues that current ammonia production should in future be based on renewable energy rather than natural gas, it also recommends that “green ammonia” should be used in other applications, as transport fuel (e.g. in shipping), and to store and transport chemical and thermal energy. 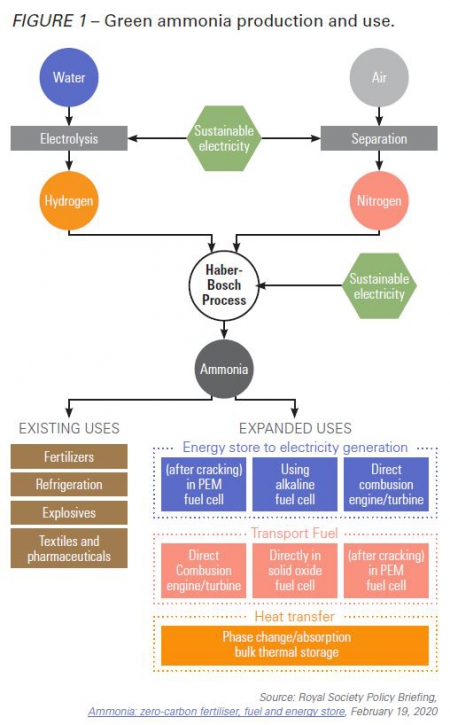 According to the Policy Briefing, which was written by a dozen researchers led by Bill David, Professor of Chemistry at the University of Oxford, ammonia production currently accounts for 1.8% of global CO2 emissions. Ammonia production could be decarbonised either by applying carbon capture to the process, in which case natural gas can continue to be used, or by producing it from hydrogen and nitrogen based on renewable energy, as shown in Figure 1.

The researchers of the Royal Society argue that “with its relatively high energy density of around 3 kWh/litre and existing global transportation and storage infrastructure, ammonia could form the basis of a new, integrated worldwide renewable energy storage and distribution solution. These features suggest ammonia could readily be a competitive option for transporting zero-carbon energy by road, rail, ship or pipeline.”

Whereas “the energy storage properties of ammonia (NH3) are fundamentally similar to those of methane (CH4),” hydrogen has a much lower energy density than ammonia, making it more difficult, energy-intensive and expensive to transport (Figure 2).

Ammonia has another advantage over hydrogen: there is a “worldwide ammonia infrastructure” in place including “significant ammonia maritime trading”. Hydrogen by contrast tends to be used more locally. Thus, for example, the US has over 10,000 ammonia storage sites.

There are also risks, notes the report. Ammonia “is corrosive and potentially toxic”, and its abundant use in agriculture contributes to biodiversity loss and lower air quality.

The Policy Briefing discusses a number of new applications for green ammonia. One particularly promising use could be as a fuel in heavy transport, particularly shipping. The shipping industry is already exploring this possibility. For example, MAN Energy Solutions, a designer and manufacturer of marine engines, “are developing ammonia fuelled-engines based on current liquid natural gas technology and anticipate that the first ammonia engine could be in operation by early 2022.”

As to the choice between “blue ammonia” (based on natural gas with CCS) and “green ammonia”, the Policy Briefing notes that the blue version is “likely to be the lowest cost option”, but adds that it leads to emission reductions of no more than 60 to 85%, which is not enough for a net zero carbon solution. 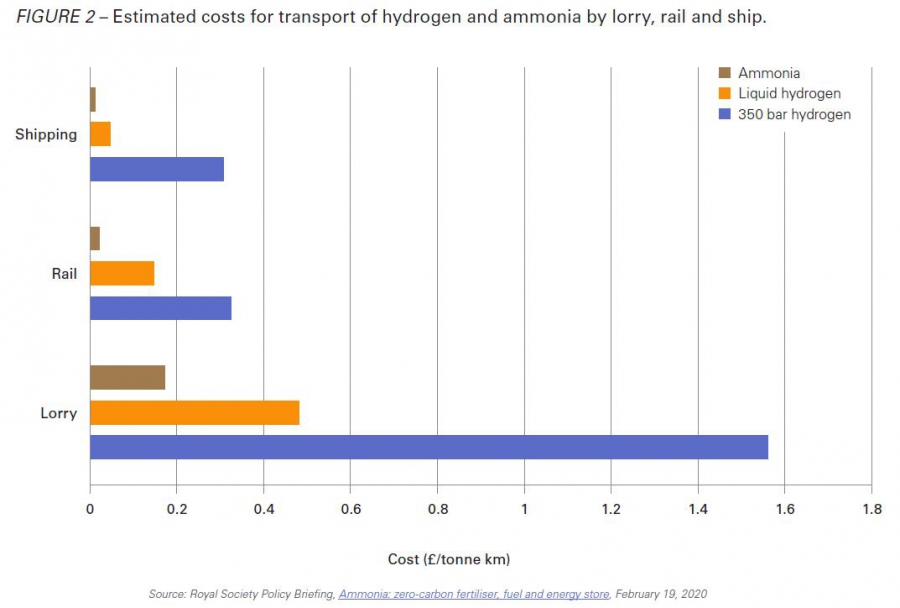 Production of green ammonia is only done at demonstration scale at this moment. For example, one trial – a downscaled Haber-Bosch process integrated with water electrolysis – is in operation at the Rutherford Appleton Laboratory in Oxfordshire, UK. Another one is going on in Fukushima, Japan. A number of other methods of green ammonia production are being researched, but are all still at a basic stage.