Rosneft and Gazprom may both be state-owned enterprises, but they are also fierce rivals, representing different factions of the Russian elite that vie for political and economic influence. While Rosneft has traditionally dominated Russian oil production, Gazprom has held sway over Russia’s substantial gas supply – a division that is partly a relic of the Soviet era, when the USSR had separate ministries for oil and natural gas.

However, the line between the pair’s spheres of operation has become increasingly blurred over the last two decades. Gazprom bought Siberian oil producer Sibneft in 2005, and rebranded it as its oil arm Gazprom Neft. Since then that company has grown significantly in size, and is on track to reach a production rate of 2mn barrels of oil equivalent/day by the end of this year. Rosneft, meanwhile, has made significant inroads into the natural gas market. 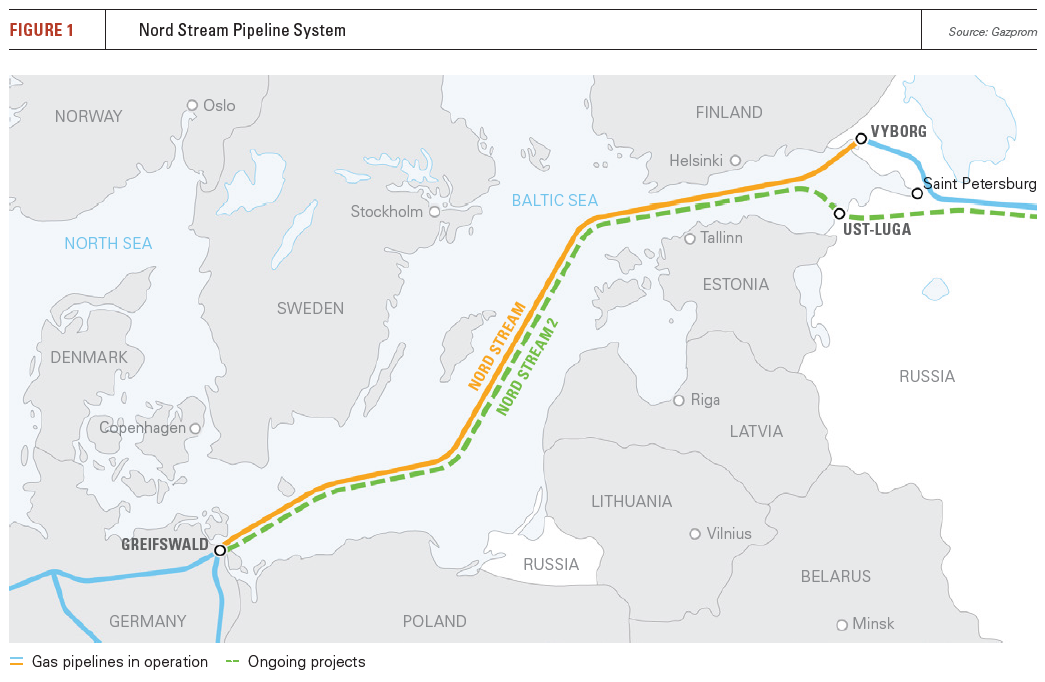 Over the years, Rosneft has acquired a number of large-sized gas assets and has also seized industrial gas customers in Russia from Gazprom. According to its latest operational data, the company is on track to produce around 67bn m3 of gas this year – a sizable amount even if it pales in comparison to the 506.5bn m3 that Gazprom is projected to flow.

When it comes to the more lucrative export of natural gas, however, Rosneft’s strategy has floundered. The company has tried to advance several liquefaction projects since the Russian government permitted companies other than Gazprom to export LNG in 2013, but so far without success. It appears the company has struggled to get hold of sufficiently large and economically feasible gas reserves to justify these projects, and generally low gas prices over the last decade have not helped matters. And despite aggressive lobbying over the years, Rosneft has so far failed to convince the government to grant it access to Gazprom’s gas export pipelines, although the company now appears confident it can finally end its rival’s monopoly in this area.

Rosneft’s vice president, Didier Casimiro, told Russia’s Vedomosti newspaper in early December that he was hopeful the company would be allowed to use Gazprom’s pipelines to send gas to Europe.

“We really expect a positive decision on this issue,” he told the newspaper, adding that liberalisation of the gas industry would be good for Russia.

Russia’s government has resisted such a move in the past, reasoning that competition between Russian gas and Russian gas overseas would drive down prices and reduce revenues for the budget. However, this logic falls flat amid the current supply crunch in Europe, where wholesale prices have jumped to prices previously not thought possible in recent months. Rosneft is looking to exploit the market’s current state to secure a share of the European market to hang onto even after more gas arrives on the market and prices subside.

Moscow has shown clear signs it is warming to Rosneft’s proposal. Russian energy minister Nikolay Shulginov said in November that he supported Rosneft’s bid, but would leave it up to the company to make arrangements with Gazprom. And in early December, Russian president Vladimir Putin invited proposals for the delivery of some 10bn m3/year of gas from Rosneft to Europe.

While Gazprom has faced accusations of withholding gas supply from Europe and exacerbating the energy crisis, the company’s production may well be at its maximum capacity, given the time of year and the investment cuts and project deferrals it made at the onset of the coronavirus pandemic. In any case, Gazprom is fulfilling its long-term supply contracts but is not releasing any additional volumes onto the spot market. And its supplies in Europe slumped to a record low in November, despite past promises it would ramp up deliveries.

If Gazprom is indeed at its production capacity, Rosneft offers a solution for fending off criticism that Russia is not sending enough gas, while also expanding the country’s market share. The company has several large new gas projects in the works including Rospan and Kharampurneftegaz in Western Siberia. It commissioned the next phase of Rospan earlier this year, and the project is expected to flow 21bn m3/yr of gas at full capacity, versus 6.24bn m3 in 2020. Output at Kharampurneftegaz was less than 1bn m3 last year but is expected to reach 11bn m3/year under its first stage of development. Rosneft’s partner at Kharampurneftegaz is BP.

The government has also become more receptive to Rosneft’s proposal as it may help Gazprom get over EU legislative obstacles at Nord Stream 2. The fact that Gazprom both owns the pipeline and is the only company permitted to send gas through it could prove an obstacle in certifying the pipeline’s operator in Germany. If and when the pipeline is allowed to flow gas, EU rules might also limit how much of its capacity Gazprom can use.

Will Rosneft’s lobbying efforts finally pay off? Experts see it as a distinct possibility, although Gazprom would likely play a role in the sale of the gas.

“Rosneft could well get the right to export 10bn m3,” Mitch Jennings, oil analyst at Moscow-based Sova Capital, tells NGW. “This is the most serious the government and president Putin seem to have been in considering allowing Rosneft export access, albeit using Gazprom as an agent.”

“I put the chances at below 50/50, but not far below that. But Gazprom will continue to fight like hell to keep the monopoly intact,” Ronald Smith, analyst at BSC Global Markets, adds.

Gazprom may fear that giving Rosneft access to its European pipelines could also pave the way for the ending of its exclusive rights to Power of Siberia, which funnels Eastern Siberian gas to China. Rosneft’s oilfields in that area have significant associated gas reserves that cannot be developed because of limited local demand.

“Giving Rosneft access to Gazprom’s export infrastructure could definitely help with the Nord Stream 2 certification process,” Smith continues. “The 10bn m3 under discussion would not be enough, but it would ease negotiations.” 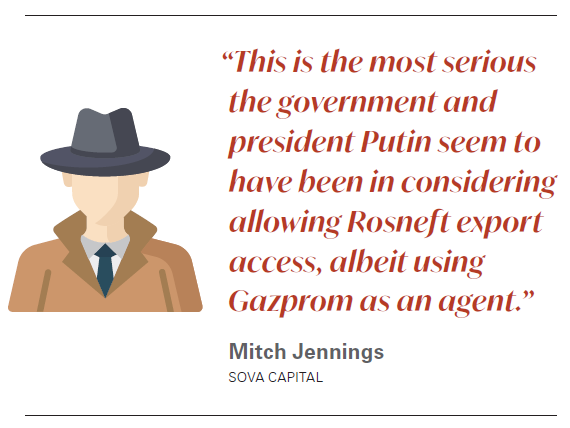 “My view is that in the future Rosneft and other non-Gazprom producers could supply their gas to Europe, provided that a single export channel is maintained,” Katja Yafimava, senior research fellow at the Oxford Institute for Energy Studies says. “This could also be seen as fulfilling the third-party access requirement at the Nord Stream 2 pipeline, as these producers could have access to a portion of pipeline capacity not available to Gazprom itself whereas Gazprom would be delivering the gas on their behalf.”

This said, Putin notably requested proposals on the plan by March, indicating that Rosneft’s gas is unlikely to arrive in Europe this winter. The energy crunch in Europe may have eased by then, and Gazprom will have had time to bring more wells on stream and increase its deliveries. Gazprom may also find that it can get Nord Stream 2 certified and flowing at high capacity without handing a major victory to its domestic rival.