The key message from this year’s BP Energy Outlook 2019 is that even though renewables are set to grow faster than any fuel in history, emissions will keep rising. And all this while the global demand for energy is set to increase by a third by 2040 driven by increases in prosperity in the developing world.

Introducing the Outlook, CEO Bob Dudley said: “One of the biggest challenges of our time is a dual one: the need to meet rising energy demand while at the same time reducing carbon emissions.” The world needs both – doing one without the other will not work. 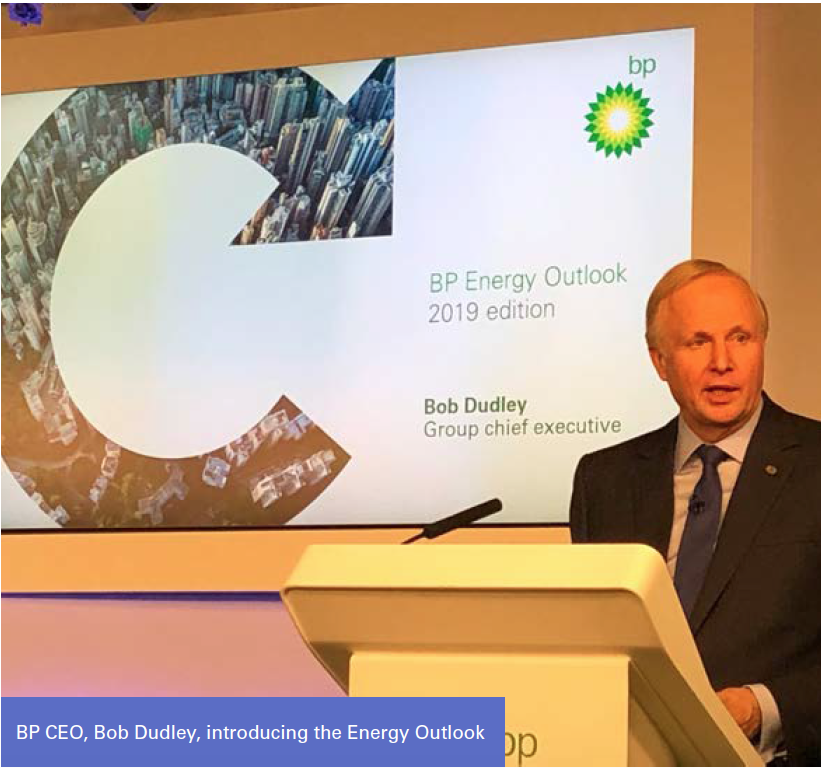 As every year, the Outlook considers a range of scenarios to explore different aspects of energy transition (Figure 1). What they all have in common is increasing economic growth and a shift towards a lower carbon fuel mix. Where they differ is in terms of policy, technology and behavioural assumptions.

Unless otherwise stated, this article, like the Outlook, is based on the ‘Evolving Transition’ (ET) scenario. This assumes that government policies, technology and social preferences continue to evolve in the manner and speed seen over the recent past.

The key findings in BP’s latest Outlook are:

Presenting the Outlook, BP group chief economist Spencer Dale said that most of the increase in global primary energy over the reference period to 2040 comes as a result on the increase of income per head in the developing world, demanding more energy. Without more energy becoming available this rising prosperity will be suppressed. 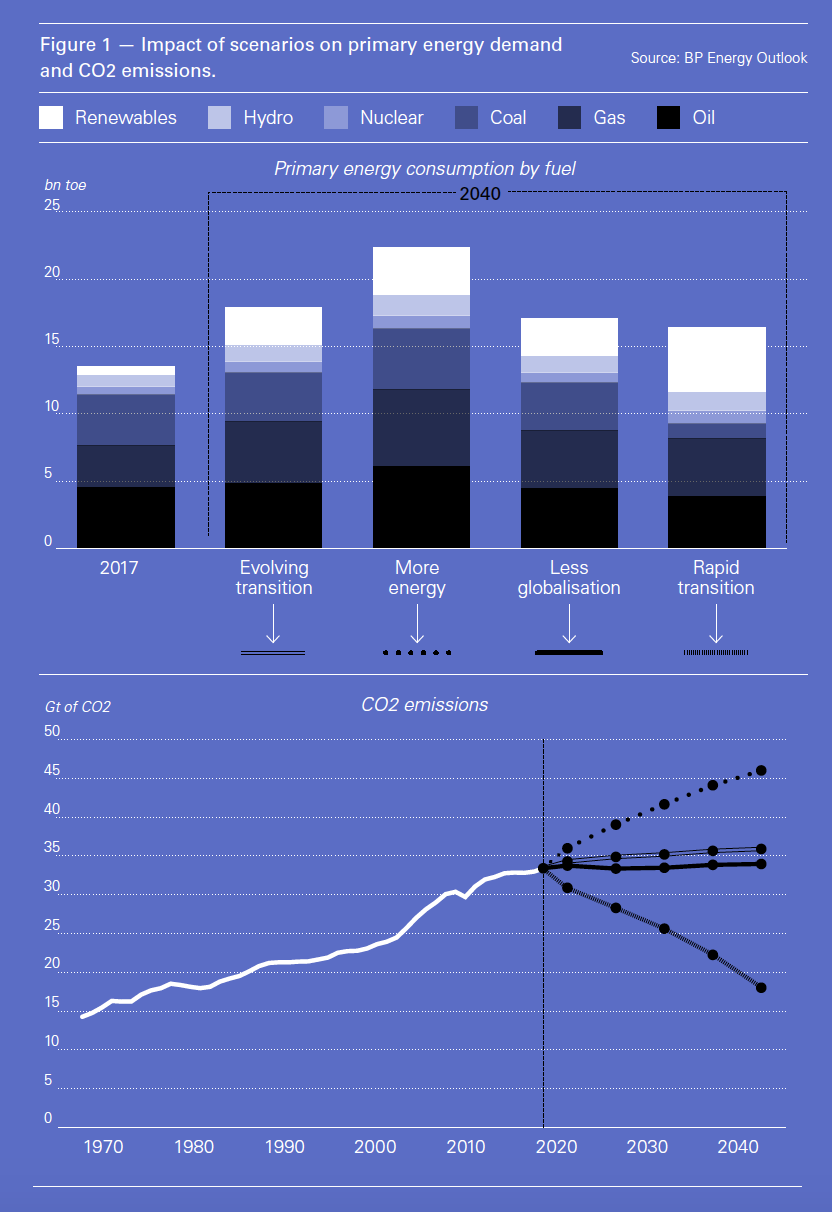 Dale, commenting on the findings of the Outlook, said: “We are seeing growing competition between different energy sources, driven by abundant energy supplies, and continued improvements in energy efficiency. As the world learns to do more with less, demand for energy will be met by the most diverse fuels mix we have ever seen.”

1. How much ‘more energy’ does the world need?

There is a clear correlation between human progress and energy (Figure 3).

In the ET scenario (Figure 1) the world will use about a third more primary energy by 2040 than now, but it will still be leaving about two-thirds of the world’s population below the 100 GJ threshold (Figure 3).

Clearly, the world may need to produce even more energy to allow more people’s living standards to continue to improve closer to this threshold. According to the Outlook, ensuring that two-thirds of the world’s population achieve this will require a quarter more primary energy than in the ET scenario by 2040.

As an example of the impact of this expectation of greater prosperity, consider the following. About four people in every five have never been on a plane, but with an expanding middle-class in the developing world this is changing rapidly. It is expected that there will be 100mn people flying for the first time this year, 100mn next year and so on. This needs more energy. 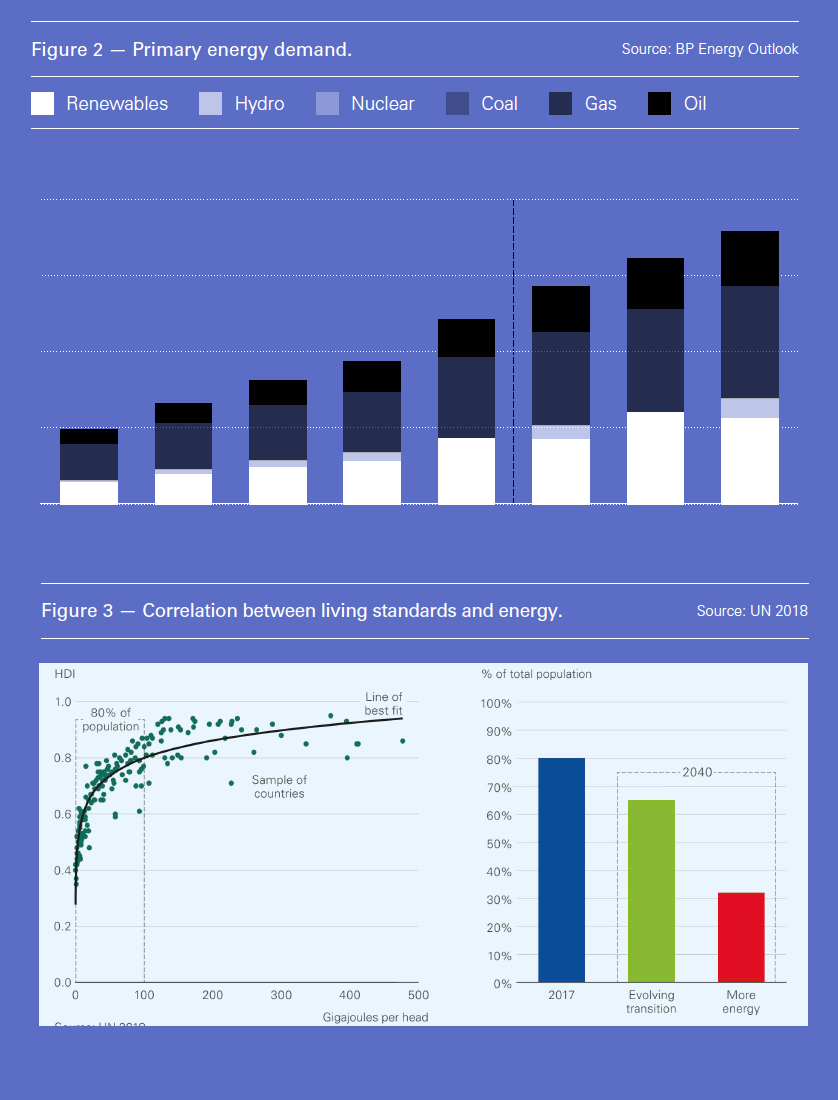 2. How important are plastics for the future of oil demand?

There is rising concern about single-use plastics, but completely banning plastics is highly unlikely. Tightening regulation on the use of plastics is likely to impact oil demand by about 3mn b/d.

However, it is important to be aware of unintended consequences. On average it takes 80% more energy to manufacture and 40% more energy to transport a glass bottle than a plastic one – with more carbon emissions in the process.

As a result, without further advances in alternative materials and the widespread use of collection and reuse systems, the unintended consequence is that a ban on single-use plastics could result in an increase in energy demand and carbon emissions.

An important new addition to the Outlook is consideration of the potential impact of disputes and their impact on limiting or curtailing ‘globalisation’.

Trade disputes and threats increase energy security concerns. In response to this, countries tend to switch to producing more of their own energy at the expense of imports. It also cuts global GDP.

The greatest impact is felt in countries and regions most exposed to foreign trade and energy imports. Notable examples are China, Japan, India and Turkey. This results in less imports of tradable fuels, oil and gas, and a shift in the fuel mix towards domestically-produced sources of energy, leading to a sharp reduction in energy trade.

Trade disputes also impact oil and gas exporting countries. The US and Russia are notably vulnerable to this.

Dale warned that “The message from history is that concerns about energy security can have persistent, scarring effects.” An example is the 1973 Arab oil embargo. 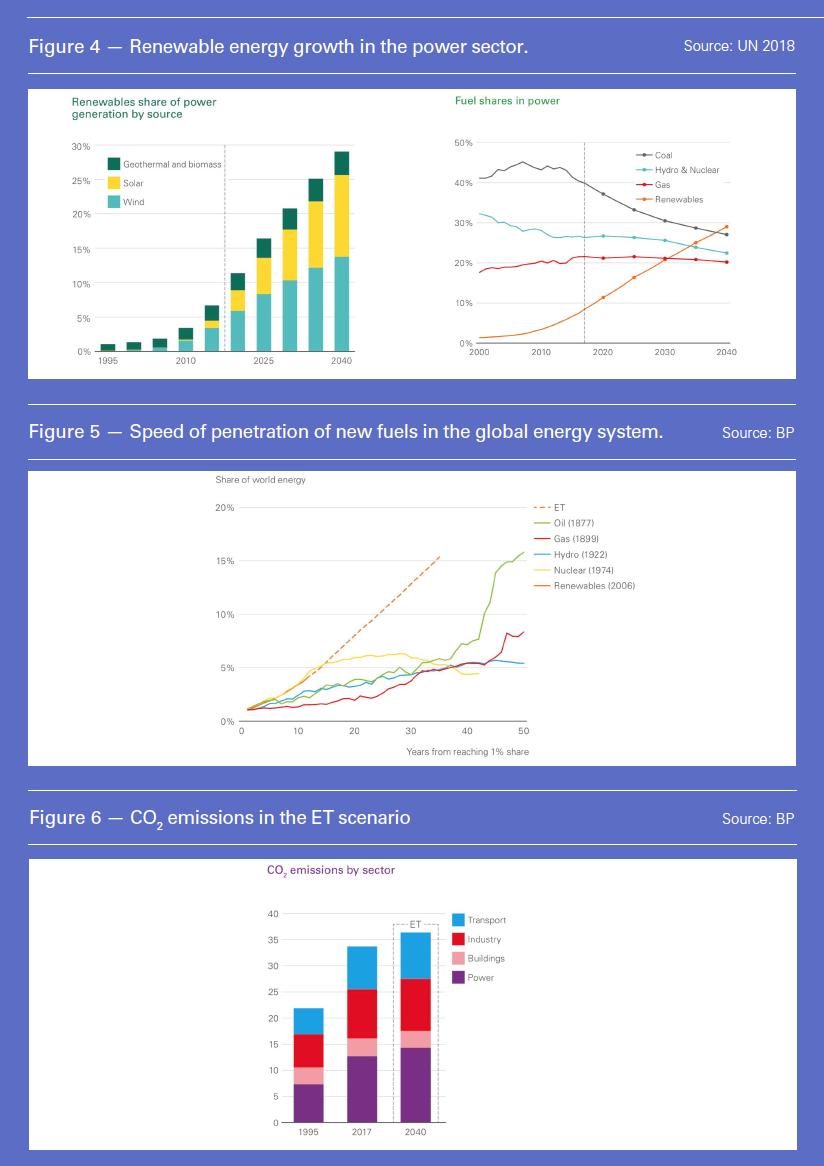 4. How quickly could renewables grow?

Renewables are growing at an unprecedented rate, by 7.1%/year. By 2040 their share of global primary energy will be 15% in comparison with 4% now. Their biggest impact is in power generation where they are expected to overtake coal by 2040 (Figure 4).

According to the ET scenario, by 2040 renewables will be contributing close to 30% of power generation (Figure 4), growing faster than any other form of energy has ever done (Figure 5). It can be even faster under the ‘rapid transition’ (RT) scenario, based on implementation of low-carbon policy measures.

5. A low-carbon energy system: what more needs to be done?

In the ET scenario emissions are still growing, but much more slowly: just 8% between now and 2040 (Figure 6).

According to the Outlook the greatest growth in CO2 emissions between now and 2040 will be from the power sector (Figure 6), mostly thanks to coal.

The Outlook suggests that replacing most coal with renewables, primarily in the power sector, but also in the industry and buildings sectors, can be quite effective by reducing emissions.

This is what the RT scenario does.  As can be seen in Figure 7, RT can reduce emissions by 45% by 2040 against current levels – and 47% less than what is achievable through ET. 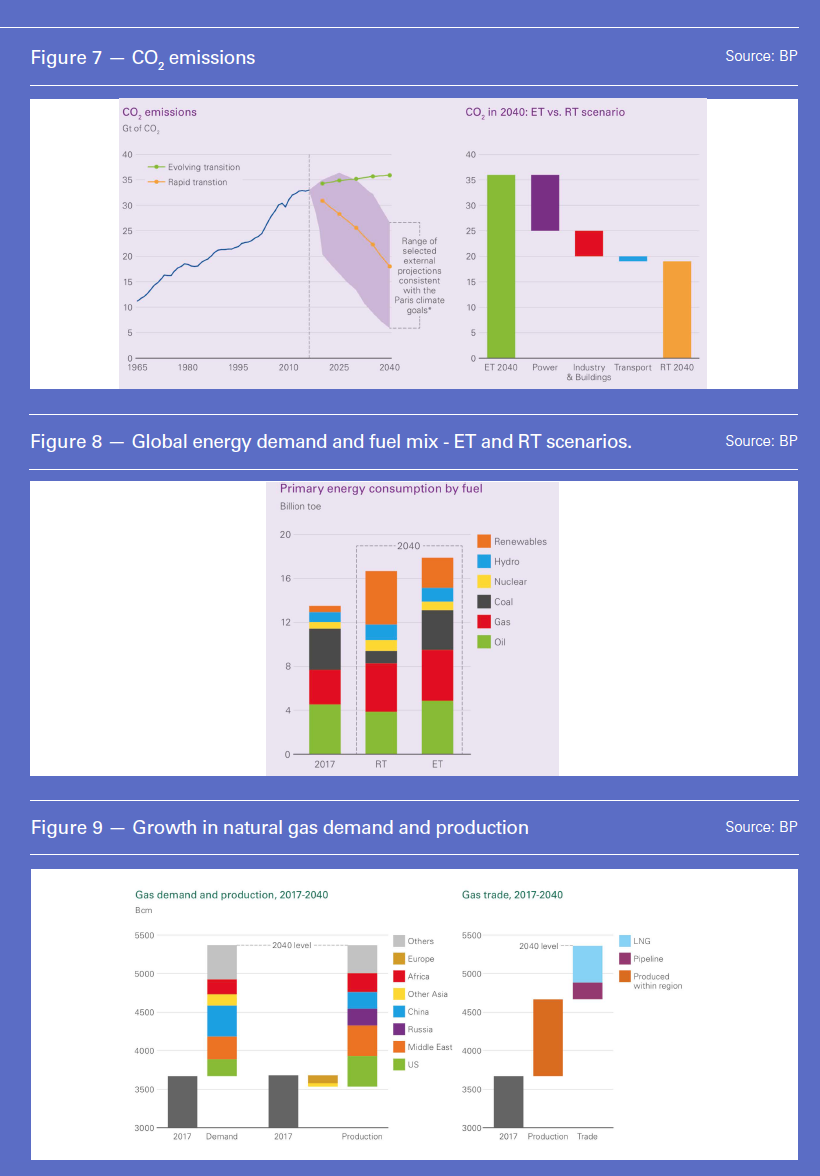 But there is no silver bullet to achieve this – many forms of energy and implementation of a comprehensive set of policies will be needed, including high carbon prices.

The fall in emissions in the RT scenario is achieved through a combination of a significant rise in the carbon price, gains in energy efficiency, switch to lower-carbon fuels and greater use of CCUS – carbon capture use and storage – with natural gas. Clearly, though, further steep emission cuts will be needed beyond 2040 (Figure 7), particularly in the power sector.

One notable observation from Figure 7 is that the scope of emissions reduction in the transport sector is small, even under RT. Dale said that electric cars “just don’t move the dial” on transport emissions. However, they make a significant contribution to clean air in cities.

As Figure 1 shows, the outlook for natural gas is good whichever scenario is considered. Even with RT, the contribution from gas is almost unchanged in real terms relative to the ET scenario (Figure 8).

According to the Outlook, trillions of dollars of investment into oil and gas production will still be needed over the next 20 years to meet global demand for energy. Dale said “Without that investment the world would not even be close to delivering on the new energy transition.”

Natural gas grows strongly, supported by broad-based demand and driven by plentiful low-cost supplies, so that gas and renewables grow while all other primary energy sources decline over the period considered by the Outlook. Demand is driven mostly by power and industry, with fast growth in the transport sector but at smaller volumes.

LNG exports increase significantly, led by US and Qatar with a 40% share by 2040, fostering a more competitive and globally-integrated market. LNG trade is expected to more than double, reaching almost 900bn m³/yr in 2040 up from around 400bn m³/yr in 2017, with Asia remaining the dominant market. But in China, the choice and volume of gas supplies may also depend on the energy security implications of different sources of supply.

Europe will remain a key market, both as a ‘balancing market’ for LNG supplies and a key hub of gas-on-gas competition between LNG and pipeline gas.

However, the abundance of gas supplies and competition with cheaper renewables and coa, mean that price matters. Lower prices will support future increase in demand and conversely high prices could limit future demand growth.

The abundance of global oil and gas resources means that global energy markets are becoming more competitive. In addition, new technologies change the way energy is produced, transported and consumed. These are often disruptive, but they also open up new opportunities.

The greatest challenge will be to reconcile the need for more energy to support continued global economic growth and rising prosperity, together with the need for a more rapid transition to a lower-carbon future. As Dudley said, this is one of the biggest challenges of our time. “We know the desired outcome of energy transition, but we still do not know the path to get there.”

Environmental campaigners are urging oil and gas companies to reduce emissions and spending on fossil fuels. However, the challenge is: what are the alternatives to provide the additional energy the world will need in future. And how is this additional energy going to be provided in a reliable and dependable way, and on demand?

Nevertheless, emissions are going in the wrong direction. The world needs a comprehensive set of policies to meet the dual challenge of more energy, less emissions. Energy firms are quite willing to work with governments to achieve this. Dudley summed this up when he said “we can do this even faster and more efficiently with clearer, smarter policy signals from governments.”

But, as Dale said, it is important to remember that it is not a race to renewables – it is a race to reduce emissions. With global energy demand going up, most fuels will still be needed to 2040. The road to Paris is long and challenging.