The great majority of renewable capacity in Asia at the start of the 2010s comprised large-scale hydroelectric facilities. The 367 GW of Asian hydro plants operating in 2010 accounted for 95% of the continent’s renewable facilities.

But, by 2018, hydro’s share of the 1,024 GW of Asian renewable capacity had plummeted to 53% following the commissioning of increasingly large tranches of wind and then solar plant. Asian wind capacity increased almost five-fold to 229 GW between 2010 and 2018, while solar capacity soared from 5 GW to almost 275 GW over the same period. 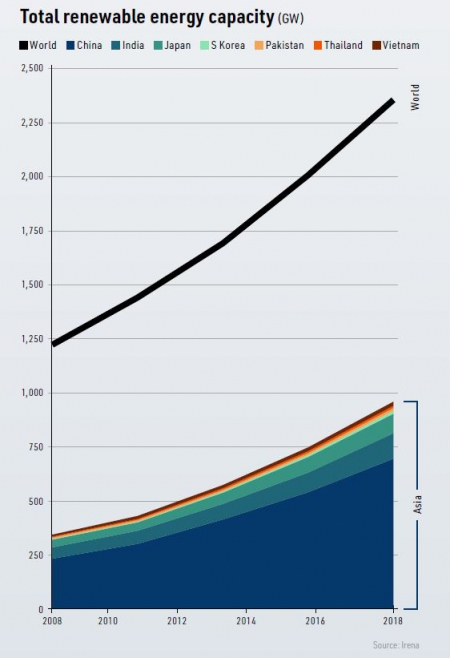 Underpinning these trends were developments in China. In 2018, the country accounted for about two-thirds of Asia’s total renewable, hydroelectric and solar capacity. It hosted 80% of Asian wind capacity and an even higher percentage – 95% -- of its offshore wind facilities. Much of the remaining renewable capacity was hosted by India and Japan.

While final figures for 2019 are not yet available, it is clear that Asia in general and China in particular continue to dominate the renewable energy market.

BloombergNEF data published in mid-January indicates that Chinese spending on solar capacity fell by a third year on year to $25.7bn in 2019, primarily because of uncertainty over power sales tariffs and pricing policies. A 10% hike in offshore and onshore wind investment to $55bn was insufficient to offset this drop, meaning overall Chinese renewable investment decreased by 8%.

However, at $83.4bn, the country still accounted for 30% of the $282.2bn of total global spending on renewables last year.

Outside the large-scale hydro sector, investment in Asian renewables was initially driven by subsidies provided primarily through advantageous feed-in tariffs. However, over the past decade, subsidies have become less crucial as economies of scale, efficiency gains and technical advances have been achieved, and wind and solar equipment costs have fallen precipitately.

In China, the average renewable cost premium over coal fell from more than 100% in 2010 to 26% in 2019, according to Wood Mackenzie. Moreover, the consultancy says that the average levelized cost of electricity (LCOE) from solar and wind was already lower than for Chinese gas-fired generation and that, by 2026, it could be competitive with coal.

The speed and extent of the fall in costs is indicated by figures from the International Renewable Energy Association (Irena). Irena estimated the average LCOE for wind and large-scale solar PV projects worldwide in 2018 at $65/MWh and $85/MWh respectively. The figures have now fallen to $45/MWh and $48/MWh.

Irena’s calculations are similar to other analyses, including projections made by the US Energy Information Administration for US plant entering service in 2023. 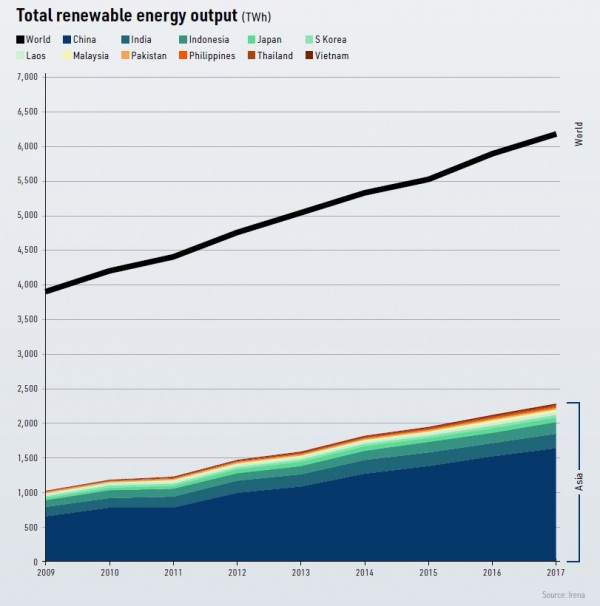 Irena anticipates that costs will continue falling. It projects that the LCOE for solar PV could range from $14-50/MWh in 2050, while the LCOEs for onshore and offshore wind could range from $20-30/MWh and $30-70/MWh, respectively.

It can thus be expected that renewable capacity will continue to be installed at a fast rate in Asia. This reflects not only the competitive cost of renewables, but the expectation that electricity demand will grow strongly as its use expands in the transportation and other sectors.

It also reflects the fact that renewable energy’s penetration into most Asian markets is still low, meaning that in most countries integration is not yet a critical issue. In 2018, renewables accounted for only 4% of Asian primary energy supply. Even in the power sector, renewables’ share was under 9%, if large-scale hydro is excluded.

However, some of the growth projections are highly ambitious. In its renewable-focused REmap scenario, Irena forecasts that Asian solar PV capacity could reach 1,860 GW in 2030, including 1,412 GW in China. By 2050, Chinese solar PV capacity is projected to reach 2,803 GW within an Asian total of 4,837 GW. Achieving the latter figure would require $113bn/yr of investment to 2050. 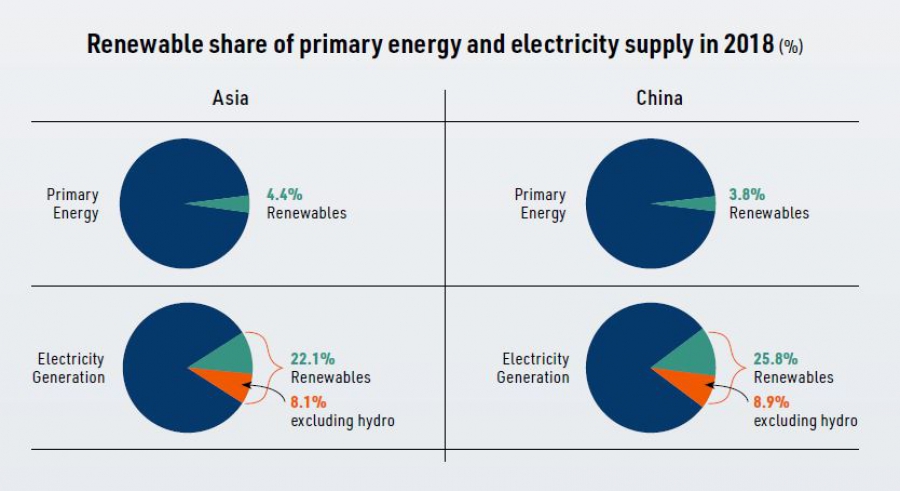 At the global level, Irena projects that in 2050 wind and solar will respectively account for 35% and 25% of total generation. On top of the investment in new generation, Irena estimates that $374bn/yr of spending will be needed worldwide up to 2050 on the electricity grid and storage. 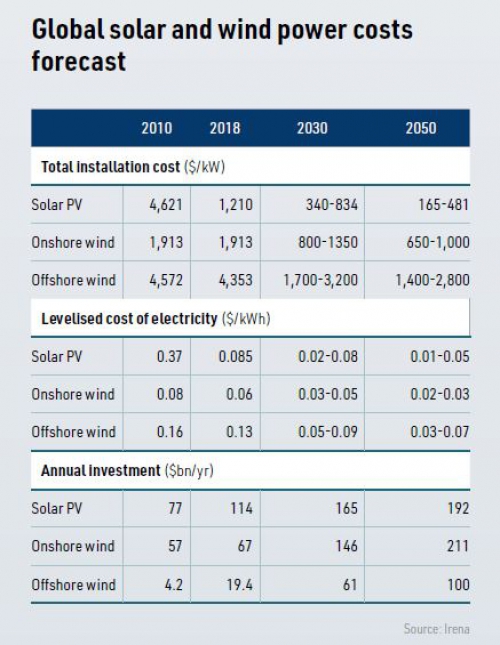 Renewable generation of this magnitude would squeeze gas and in particular LNG use, not least by crowding out capital investment in gas-fired generators and LNG terminals. The biggest impact could occur in countries where indigenous coal is currently the main source of baseload generation, but might be forced up the load curve by competition from renewables, pushing out gas.

However, there are question marks over the viability of electricity systems based on such a large proportion of wind and solar generation, given the plants’ intrinsically variable output. Advocates of the extensive deployment of solar and wind argue that technical advances will alleviate the problems through, for instance, improved battery storage. But the obstacles remain substantial, especially given that many of the proposed technical fixes remain to be proven.

One issue is that in large parts of Asia, including much of Southeast Asia, wind resources are limited. Another is that in many areas the high cost of and competition for land may make large-scale solar or wind arrays politically or economically difficult. These issues could affect supply to some of Asia’s main power demand centres, meaning large amounts of electricity would have to be stored and then transported long distances from wind and solar resources.

Given the substantial cost of integrating renewables into electricity systems, it is arguable that simple LCOE comparisons between renewable and fossil-fired plants can be misleading.

Moreover, as the proportion of renewable capacity in a system increases, the cost of integrating new plants tends to rise because of the need for increased storage or other mechanisms such as flexible consumption.

It has also been argued that there is an effective cap on how much wind and solar capacity can be installed, especially in liberalised wholesale power markets. Since there are no fuel and few other variable costs, the floor price for power is effectively zero or even negative from, for instance, a solar plant operating on a sunny day if too much similar capacity has been built.

This variation on the cannibalisation effect means investors will become increasingly reluctant to add capacity since they may not be able to recoup their investment. 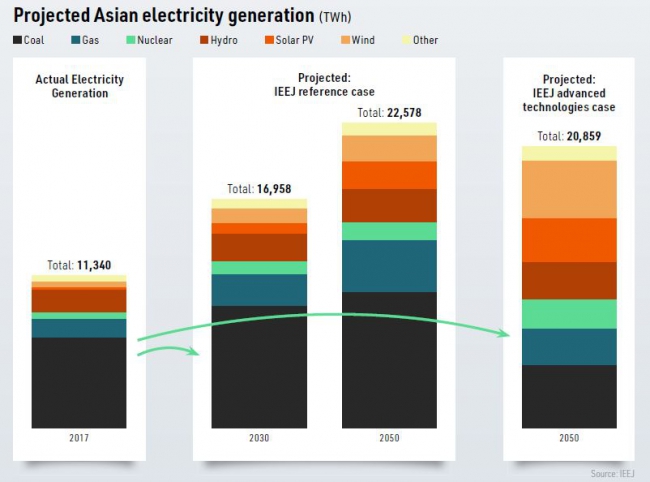 As a result, many analysts are cautious about overestimating the potential level of renewable penetration and its impact on gas-fired generation. In order to mitigate the risks of as-yet unproven technology and avoid expenditure on storage capacity becoming unmanageable, variable renewable output will need complementary, fossil-based back-up generation.

In the reference case of its Outlook 2020 study the Institute for Energy Economics Japan (IEEJ) projects that “natural gas will expand its share [of global generation] from 23% in 2017 to 30% in 2050” as a result of “technological development…coupled with natural gas’s growing role in adjusting for intermittent renewable energy generation.”

IEEJ’s reference case projects that solar and wind will provide only 8% of global generation each in 2050 – way below the combined 60% projected by Irena. Not surprisingly, IEEJ’s global capacity projections for solar and wind in 2050 are well below those of Irena at 2,954 GW and 1,810 GW, respectively.

IEEJ forecasts that gas’s share will be lower in the Asian power sector, accounting for only 17% of supply in 2050 in the reference case. However, this reflects the continued dominance of coal, at almost 45% of generation, rather than massive inroads by solar PV or wind output. These are projected to each account for around 9% of supply.

IEEJ also includes an advanced technologies case, which combines lower electricity demand and higher renewable penetration. In this case, global solar and wind capacity in 2050 are projected at 4,434 GW and 3,065 GW, respectively. However, even here gas-fired generation is projected to almost double in Asia between 2017 and 2050, with coal the main loser from increased renewables.

IEEJ’s analysis of LNG demand focuses less on its competitiveness against renewables and more on its competitiveness versus coal. Asian LNG demand in the reference case is projected to rise from 239mn metric tons in 2018 to 301mn mt in 2030 and 436mn mt in 2050, but with consumption in the latter year projected to range from 221mn mt to 680mn mt depending on the LNG price.

How the deployment of renewables actually affects Asian gas and LNG demand remains to be seen, and will vary substantially between countries and regions. But there are grounds to argue that in many countries the expansion of renewables will offer opportunities as well as pose challenges to the international LNG market.