Over recent weeks gas prices have reached fresh record lows in Europe, with front months in the UK (National Balancing Point gas hub) dipping below 10p/th ($1.20/mn Btu) by the end of May on weak, virus-impacted demand, resilient domestic production, steady LNG flows and surging renewables. The more heavily traded Dutch TTF benchmark is similar, hitting a new record front-month (June) low of $1.27/mn Btu on May 28, reflecting extreme market weakness across the continent. With little pick-up in demand expected over the next couple of months, the Oxford Institute of Energy Studies says it expects European storage to be full by August and that Ukrainian capacity will also be taken up.

However, with many US LNG deliveries to Europe now cancelled or postponed (see below) and Russian exports through the Yamal pipeline dipping sharply at the end of May, there could be some easing of the oversupply.

Better spreads if you can get them

Although power demand has also fallen across Europe, power prices have not dropped as quickly as gas, which has widened the spark spread – benefiting gas fired generators and offsetting a fall in gas-fired power demand. At least this is the case outside Germany, where gas use is up slightly (see below). In the UK, gas prices began to fall around mid-October last year, when the spark spread was about £3/MWh and power prices were about £50/MWh – that widened to over £10/MWh at the beginning of May, when power prices were around £36/MWh (Figure 1). This may be because gas generators have not had any competition from other power sources at such low prices and so they can expand their profit margins slightly. This could be a lifeline for some as sales volumes fall.

However, UK consultancy Cornwall Insight’s wholesale markets manager James Brabben said the running of gas will depend not only on the spread but also when the gas generator bought their gas – it probably paid a higher price than it is now – and what sort of power contract it has. Not everyone took on the risk of flexibility.

He also noted the growing risk of negative power pricing during prompt periods (see below), and that gas generators “are having to respond in their running patterns more and more to renewables’ output – so they may have a spread but have to change their running patterns after trading and during delivery to help keep the system balanced. It sometimes means the spread is there – but demand isn’t, or is changing.”

Weak fundamentals back out summer deliveries

In the short term, there may yet be more downward pressure on prompt gas prices as storage fills. In the UK’s case, Wood Mackenzie suggests LNG regasification capacity could be limited to 2bn m³/month (half total capacity) to avoid excessive oversupply and protect domestic producers through the summer, given anticipated demand of only 3bn m³/month or so. But, with European spot prices now well below US levels, the flow of LNG from the US is falling sharply in any case. Many cargoes destined for Europe have been cancelled, including about twenty for June and 30-40 for July, according to media reports. At least half of them were from Cheniere Energy’s two Gulf Coast terminals.

There are also likely to be lower imports from other major suppliers. As well as the falls in Russian Yamal pipeline exports (as central European storage approaches tank-top), pipeline flows from Norway into Europe will be lower owing to regular summer maintenance and also possibly because of oil supply cuts, agreed as part of the recent OPEC-plus deal, which could affect some associated gas. Other major LNG exporters, including Qatar and Australia, will not be affected by oil output cuts, but some Australian cargoes have been cancelled due to low prices, and maintenance has been brought forward.

To the north, a switch in flow of Russian Arctic LNG deliveries away from Europe is expected because transit to Asia through the Northern Sea Route (NSR) has reopened earlier than in recent years, allowing cargoes to move in either direction. The Asian market, while weak itself, still commands a premium to Europe so is likely to be the destination of choice for Russian LNG: Asian spot prices reached a record low of less than $2/mn Btu (15 p/th) in late April, before rising slightly to about $2.50/mn Btu mid-May, and then softening again at the end of the month. 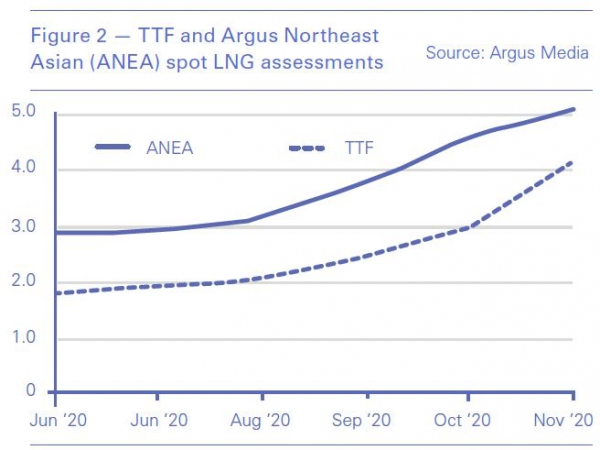 However, given these marginal premiums, Asian support is expected to be limited to soaking up some Russian and US cargoes: “Asian demand is at its seasonal low point for the year and all of the US LNG now forcing itself into China, at Lord knows what price, will not leave room for much other Atlantic Basin volume,” the head of global gas and power analytics at S&P Global Platts, Ira Joseph, noted in a Tweet. While demand in Asia-Pacific is down overall, Chinese buying has remained steady all spring despite Covid-19 disruption and buyers are keen to take advantage of current low prices. Forward price assessments indicate that the Asia/Europe differential will be maintained at least until November (Figure 2) as prices slowly recover in both markets.

While gas demand is down across most of western Europe as renewables surge and power demand remains depressed due to Covid-19 restrictions, Germany’s mix of coal and gas generation has seen gas demand rise as generators switch away from coal in favour of the cheap gas, with even the most efficient coal-fired power stations unable to compete at current gas prices. This gain in market share from coal has been greater than that lost to higher renewable output and lower overall demand, and has also outpaced a fall in industrial gas demand.

German gas consumption reached 1.34 TWh/d between 1-26 May, slightly higher than the three-year average for the whole month of 1.32 TWh/d, and the highest level since 2011. The relative economics of gas and coal remain firmly in favour of gas, helped by a moderate recovery in EU carbon prices, which have risen to around €20/metric ton CO2 (December 2020 contract), up from a low of €15.3/mt CO2 on March 18.

But while there is plenty of coal-to-gas switching potential in Germany, that is not the case in France, Italy, Spain and the UK (Figure 3), where the few remaining units went offline in mid-April, so overall gas demand for power generation across Europe has been squeezed between lower Covid-19-related demand and higher renewables use, especially with most remaining coal units already backed off the system. But there has been some relief from low nuclear output in the UK and France. In the case of the UK, EDF was paid to close a plant down in order to accommodate renewables. 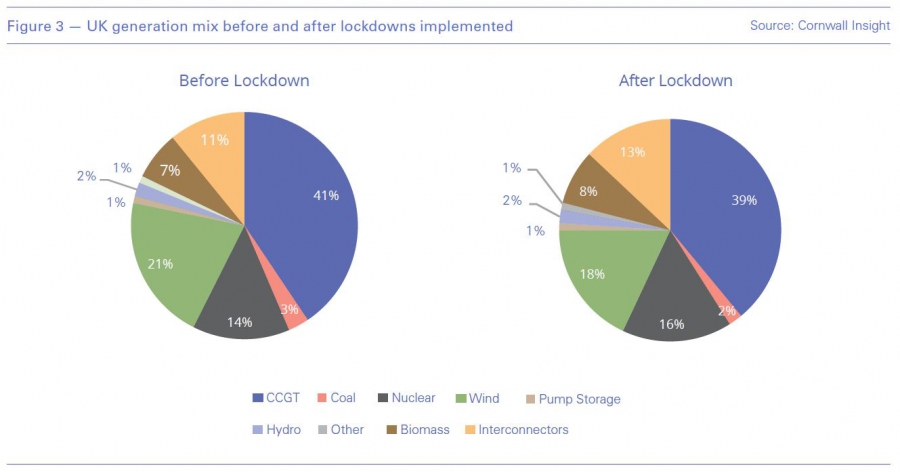 A drop in Russian imports and a prolonged period without US LNG arrivals is likely to combine with a recovery in demand post-Covid-19 and begin to tighten the market in Europe later this summer. When gas prices do begin to recover, power prices in Europe should follow them higher, although a possible lingering virus impact on demand, combined with ever-rising renewable capacity across the continent, is tending to work against this, and may help squeeze the spark spread for gas again as it edges back up. Wood Mackenzie said it expects power demand across major European power markets to fall 8.1 % in 2020 with a full recovery taking several years.

While spark spreads have widened over recent months, there have been some squeezes on particular time periods in the power market as renewables have surged against a background of weak demand, resulting in a growing number of negatively-priced power periods – which cause negative spark spreads and sometimes expensive renewable curtailment.

For example, strong renewable supply coincided with low demand on May 1, resulting in prices under €1/MWh in most major European markets. In Germany’s case, there were 179 negatively priced hours in the year-to-mid-May, compared with 212 in the whole of 2019.

Despite this, some relatively high-cost thermal generation continues to run in periods of negative prices/high renewable supply, suggesting that the German and some other thermal fleets lack the necessary flexibility or see insufficient commercial incentive to respond – although as the number of negatively-priced hours rises, so will the expense and need for greater flexibility.

Some relief may come from innovative retail offerings, such as that of Octopus in the UK – which now pays residential customers who have installed smart meters to take power during negatively-priced periods. This adds to the long-standing demand side response from industry and boosting demand during such periods. Hydro and cross-border flows are also key providers of flexibility. However smart meters are far from universal and as the power price is only a portion of the bill, the payments are not large,

For example, it would raise the cost of Contracts for Difference mechanisms, and push up prices for German consumers in order to offset the lower revenues that grid operators receive when selling renewable power.

However, several countries look set to use increased green spending as an economic stimulus in the wake of Covid-19. Many have set themselves net-zero carbon targets – which should keep the pressure on gas in the longer term. France, for example, recently raised its 2030 target for offshore wind to 8GW from 5GW, although Germany could see more upside for gas as nuclear and coal are wound down.

Op-ed: “If we want to reduce methane emissions, we should favour pipeline gas over LNG” [GasTransitions]

New Pipe to Push US Gas Exports to Mexico Higher