In February, Qatar Petroleum (QP) formally took the FID on developing the $28.75bn North Field East Project (NFE), which will be the world’s biggest LNG investment to date. The company has been securing regasification capacity in Western Europe, agreeing deals for the construction of a fleet of state-of-the-art LNG carriers and promoting its plans for low carbon LNG production.

QP is betting that low production and transportation costs, alongside an attractive carbon emissions profile, will allow it to see off competition from rival producers.

The NFE liquefaction plant, which will be developed at Ras Laffan Industrial City, will have production capacity of 33mn mt/year spread over four trains, taking national capacity up to 110mn mt/yr. The onshore engineering, procurement and construction (EPC) contract has been awarded to a joint venture of Chiyoda Corp and Technip Energies. The project is expected to come on stream at the end of 2025, with condensate, sulphur, LPG and helium production in addition to LNG. 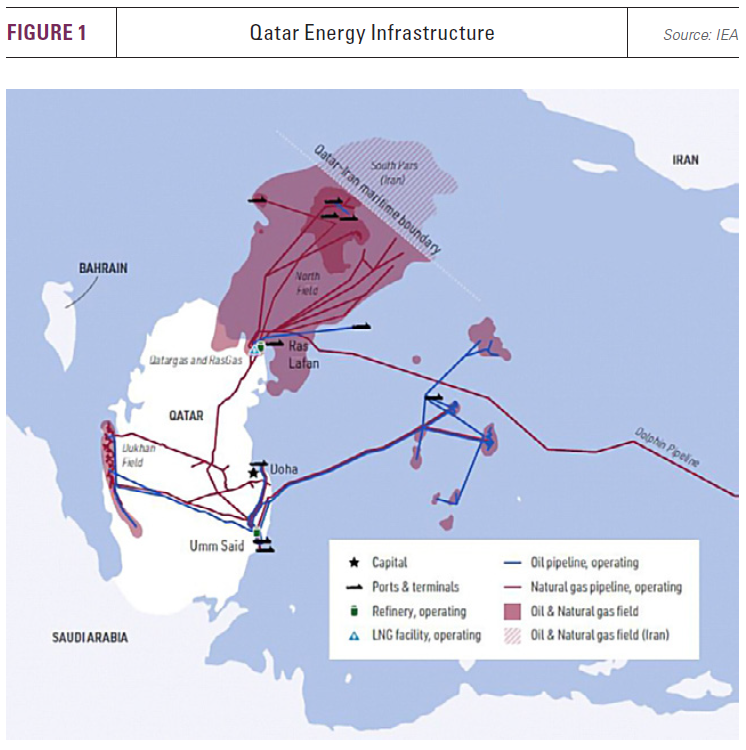 Saad Sherida Al-Kaabi, the Minister of State for Energy Affairs and also CEO of QP, said: “One of the most important environmental elements of the NFE project is its CO2 capture and sequestration (CCS) system that will be integrated with our wider CCS scheme in Ras Laffan, which – once fully operational – will be the largest of its kind in terms of capacity in the LNG industry, and will be one of the largest ever developed anywhere in the world.”

Some of the project’s power requirements will also be sourced from the 4 GW of solar generating capacity planned for the country by 2030, while a ‘jetty boil-off gas’ recovery system will help reduce GHG emissions by roughly 1mn mt/yr of CO2 equivalent.

National output could be increased further if the North Field South Project (NFS) is developed as planned, adding another 16mn mt/yr of LNG production via two more 8mn mt/yr trains. Although the FID on the project has not yet been taken, first production is being targeted for 2027. QP has announced that it is evaluating further LNG capacity additions beyond the 126mn mt/yr that the NFE and NFS projects would provide.

NFE also requires other infrastructure in Qatar. A $2bn EPC contract for the expansion of the LNG storage and loading facilities at Ras Laffan Industrial City has been awarded to Samsung C&T Corp. Three new LNG tanks and three LNG loading berths are to be built to handle NFE production, while options have been agreed for two LNG tanks and one LNG berth for the NFS project, plus all associated pipelines on both projects.

Big fish in a growing pond

The new projects were borne out of Doha’s decision in 2017 to lift the 12-year moratorium on further development of the giant North Field. Qatar’s LNG exports have been broadly static since 2011, when its earlier period of LNG expansion was completed, a process which also underpinned a significant increase in liquids production. But since 2014, Australia’s LNG exports have trebled, both the US and Russia have emerged as major LNG exporters, and other countries are developing projects to enter the market.

While Qatar’s investment plans should help the country retain its position as the world’s biggest LNG producer, the scale of the investment is about more than mere numerical supremacy.

According to Wood Mackenzie research director Giles Farrer: “At a long-term breakeven price of just over $4 per million British thermal units, [Qatar] is right at the bottom of the global LNG cost curve, alongside Arctic Russian projects. Qatar is pursuing market share. This FID is likely to put pressure on other pre-FID LNG suppliers, who may find Qatar has secured a foothold in new markets. As long-term contracts to sell LNG from some of its existing projects expire and Qatar adds new capacity from North Field East and Golden Pass in the US, Qatar is going increasingly long on volume.”

If both expansion projects are developed on schedule, Qatar will have LNG export capacity of 6.7mn barrels of oil equivalent by 2025, putting it second in the Arab world after Saudi Arabia in terms of total hydrocarbon exports. Moreover, last year Al-Kaabi said: “There is room to go above 126 [mn mt/yr]. You might hear us in a few years go higher; we have plenty of gas to do that.” The North Field holds more than 1,760 trillion ft3 of gas, plus 70bn barrels of condensate. 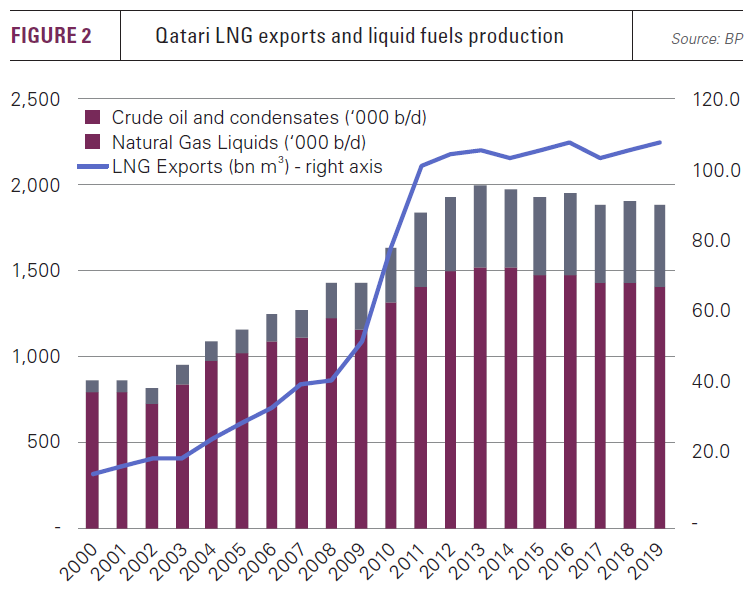 On March 30, QP announced that it would take full control of Qatargas Liquefied Natural Gas Company Ltd (QG1), when existing agreements relating to the joint venture expire at the end of this year. QG1 was set up in 1984 as the country’s first LNG producer and is currently owned by QP, Total, ExxonMobil, Marubeni and Mitsui. It has production capacity of 10mn mt/yr. The government and QP appear confident that the state-owned company has sufficient experience, expertise and the finances to operate alone.

Qatari officials say that the short-term direction of LNG prices will not affect their plans because Qatar’s low production costs mean that other producers would have to shut-in production or shelve projects before Doha.

In March, Qatargas launched a tender on behalf of QP for long-term contracts to charter LNG carriers to support its increased production from both domestic projects and the Golden Pass LNG project in the US. The 18mn mt/yr Golden Pass project is being developed in partnership with ExxonMobil and is due for completion by the middle of this decade.

QP has already reserved slots for the construction of about 100 new LNG carriers with a combined value of almost $19bn at the big three South Korean shipyards: Daewoo Shipbuilding & Marine Engineering (DSME), Hyundai Heavy Industries (HHI) and Samsung Heavy Industries (SHI), plus Chinese yards, and the successful bidders in the tender will be allocated these construction slots once their technical and commercial capabilities have been assessed.

Qatar’s LNG plans attract many superlatives, not least for the tanker construction programme, which QP describes as “the largest LNG shipbuilding program in history”. Al-Kaabi said that the agreements with the Korean companies gave QP 60% of global LNG shipbuilding capacity between 2020 and 2027, adding that “the new LNG vessels will be equipped with the latest generation slow-speed, dual-fuel engines, utilising LNG as a fuel. This will ensure the most efficient performance and compliance with the latest global emission and environmental regulations.”

The parastatal is also investing heavily at the other end of the LNG chain.

Isle of Grain is currently able to store and deliver enough gas to meet at least 25% of the UK’s gas demand and has annual throughput capacity of 20bn m³ of natural gas. The agreement will allow UK grid operator National Grid to expand its storage capacity and boost its annual handling capacity to 25bn m³. 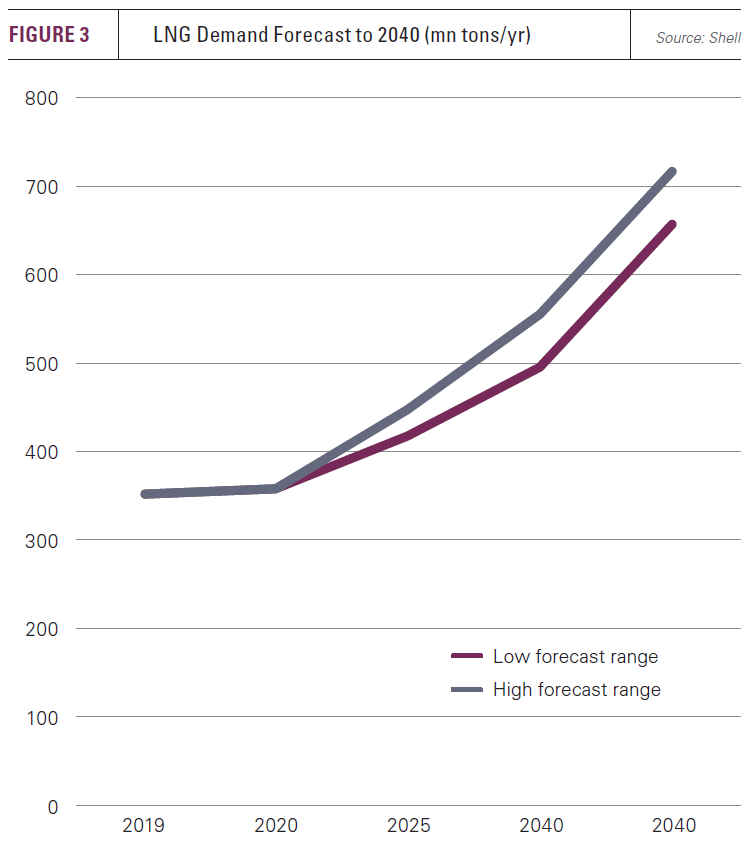 QP is already a partner in the Adriatic LNG terminal in Italy and has a majority share in the 15.6mn mt/yr South Hook LNG import terminal in Wales alongside partners ExxonMobil and Total. Last February, it signed a contract for 3mn mt/yr of capacity at the Montoir terminal in northwest France for 25 years and in 2019 signed a deal for the entire capacity of the Zeebrugge import terminal in Belgium until 2044. Zeebrugge currently has 9mn mt/yr capacity, but is being expanded by 4.7mn mt/yr.

The state-owned Qatari firm has also set up an LNG trading arm, QP Trading, as it enters the spot market in a big way. Samer Mosis, senior analyst at S&P Global Platts Analytics, said: “Successful operationalization of QP Trading, equipped with anywhere from 20-30mn mt/yr of spot-destinated supply, holds the potential to increase Qatari spot market penetration and threatens to put the final nail in greenfield LNG’s coffin this decade.”

He added: “It ushers in a new era for the world’s largest, lowest cost, producer of LNG and represents a tacit recognition by the champion of oil-indexed, long-term deals that spot trade and commoditisation are destined to dominate global LNG trade flows.”

Qatar has several big, long-term supply contracts totalling 20bn mt/yr due to expire over the next couple of years, so it badly needs new markets. QP has concluded new long-term sale and purchase agreements (SPAs) in recent months.

In February, the company signed a 10-year SPA with the Pakistan State Oil Company (PSO) for up to 3mn mt/yr from 2022. Qatargas already has a 3.75mn mt/year SPA to supply PSO that began in 2016. Pakistan’s only LNG import terminals, Engro and GasPort, are both floating storage and regasification units, but plans for more capacity are under consideration. 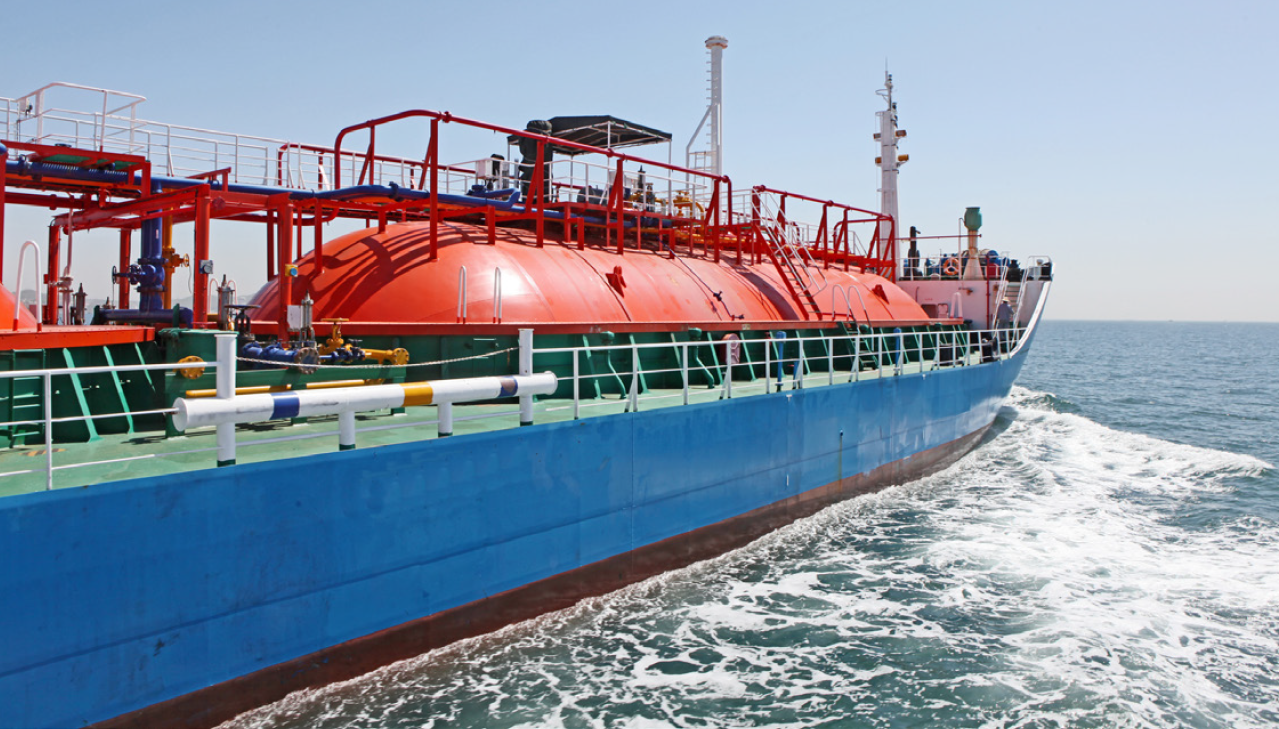 Other recent QP SPAs include a deal with Vitol to supply Bangladesh with 1.25mn mt/yr from the end of this year and a 10-year 1.8mn mt/yr agreement with Singapore’s Pavilion Energy Trading & Supply last November, which was QP Trading’s first SPA.

Most recently, in March, it concluded a 10-year 2mn mt/yr SPA with China’s Sinopec starting in January 2022. The recent deals suggest that ten years is becoming the standard length of long-term LNG supply agreements rather than the 20+ years that were more usual in the past.

Based on its expansion plans, consultants Wood Mackenzie estimate that Qatar will have more than 75mn mt/yr of uncontracted LNG volume to sell by 2027, around 70% of its LNG portfolio, but it has not revealed what proportion it hopes to tie up in long-term deals.

Spot prices have been particularly volatile over the past year, with the Japan-Korea Marker benchmark fluctuating between $1.825/mn Btu at the height of the first Covid-19 wave last April to a record high of $32.50/mn Btu this January. Spot market price volatility tends to push buyers back towards the greater certainty of long-term supply agreements. 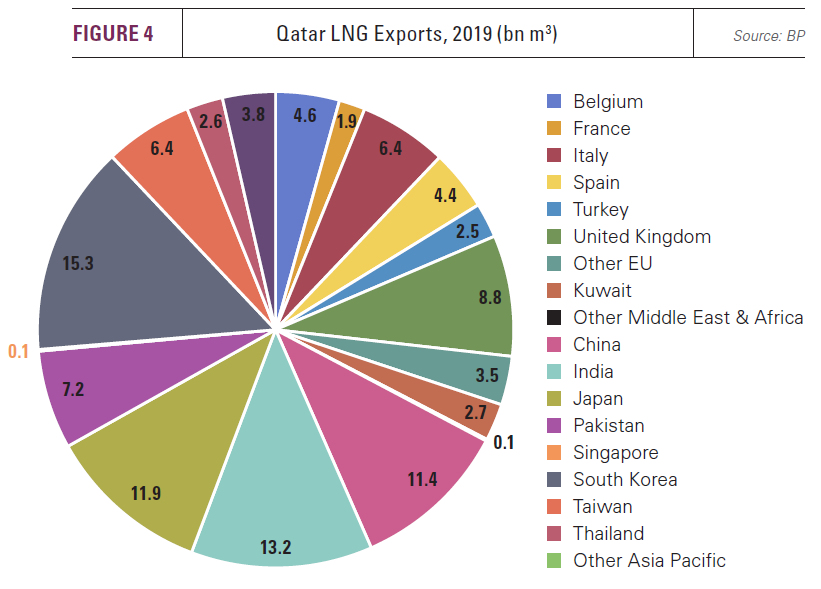 The success of QP’s decision to expand its production and transportation capacity relies on strong demand growth for LNG over the next two decades and beyond. LNG is generally regarded as a useful element in the transition from high carbon emitting fossil fuels to overwhelming reliance on renewables, but much depends on how quickly this transformation takes place.

LNG’s place in the energy mixes of 2030 and 2040 is not guaranteed, particularly in countries pursuing accelerated energy transitions. Even Qatar itself has based its power sector plans on solar power. 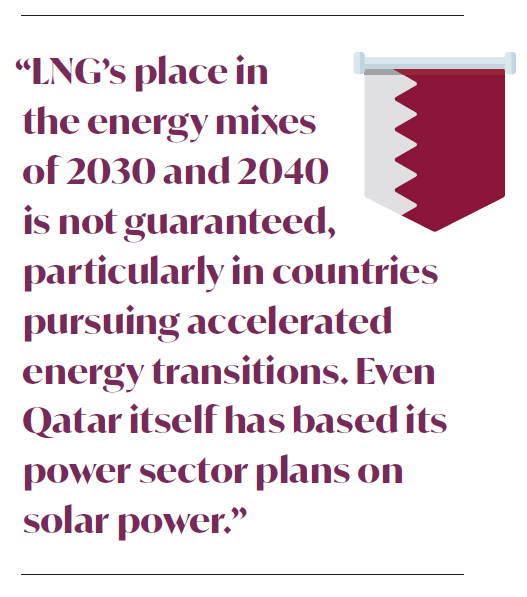 The state-owned company’s decision to focus on CCS technology is designed to promote LNG within the changing global generation mix, but also encourage carbon conscious customers to favour Qatari gas over that of its competitors.

However, global LNG consumption is likely to remain on an upward trend, despite both the impact of the Covid-19 pandemic and the energy transition. Shell estimates that global LNG demand will increase by 10mn mt/yr this year to 370mn mt/yr, a 2.8% rise on the 2020 figure.

In the longer term, under any of the International Energy Agency (IEA)’s forecasting scenarios, LNG demand growth is expected to be robust, rising to above 600bn m3 in the early 2030s even under the agency’s sustainable development scenario. As a result, Qatar should be well placed to benefit, given its low production costs and strategic geographic position between Asian and European markets.