Prices have fallen as a result of a double whammy. The steady and substantial increase in US LNG exports bringing additional supply on to the global market and then the demand crunch caused by lockdowns across the world to contain the coronavirus (Covid-19).

Yet in such a fiercely competitive market, Sakhalin II does have one major advantage: its location.

An LNG carrier leaving Sakhalin takes only two to three days to reach Japan or South Korea, two of the world’s largest LNG markets, while the ever-multiplying LNG terminals on China’s eastern coast lie just beyond. In a market like today’s, low shipping costs can be the deciding factor in making a sale.

A project of firsts

Sakhalin II came on stream in 2009 and consists of two LNG trains each of 4.8mn mt/yr capacity, using Shell’s double mixed refrigerant (DMR) technology, which was specially developed for the plant to ensure efficiency during Sakhalin’s cold winters. The plant today can produce above its nameplate capacity and saw output of 11.41mn mt in 2018. 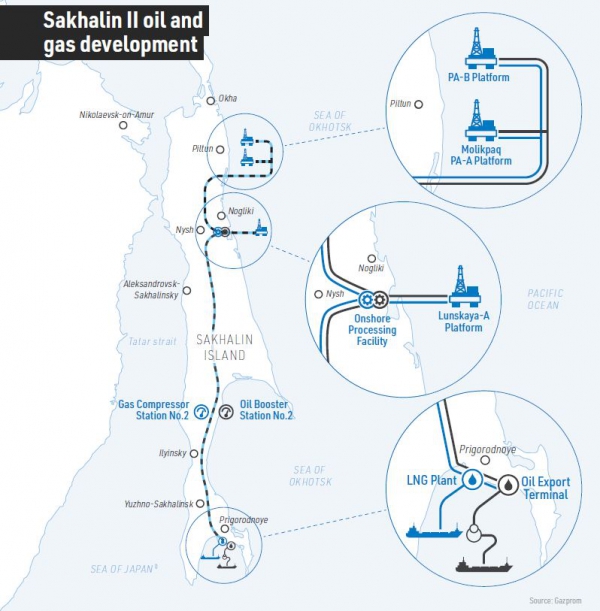 It was a project of many firsts. Not just Russia’s first LNG plant, and the first use of DMR, but as part of an oil and gas development, it included Russia’s first offshore oil platform, Molikpaq.

However, gas for the LNG plant comes primarily from the Lunskaya-A platform, as well as some associated gas from the Piltunskaya feature of the Piltun-Astokhskoye oil field. Gas is taken via the Trans-Sakhalin pipeline system to an onshore gas processing plant and then to the LNG facility.

Cold is not the only operating hazard on Sakhalin, which lies in an area of high seismicity. The offshore platforms contain pioneering engineering designed to withstand major earthquakes. They have a cradle mechanism between the topsides and their reinforced concrete bases, which have sliding pendulum bearings that protect the platforms from major seismic loads. If an earthquake hits, the topsides sway on special hinges.

Confirmed oil and gas reserves and its location make Sakhalin a good prospect for additional LNG capacity, which should be well able to compete in Asia’s growing gas markets. Plans to build a third LNG train at Sakhalin II, with capacity of 5mn mt/yr, are in fact longstanding.

Gazprom had intended to have the new train up and running by 2021, but progress has been slow and the project remains on hold.

There are a number of factors frustrating the project – developing additional gas resources to feed the new train; competing plans for an LNG plant by the consortium operating the Sakhalin I project; US sanctions; and Gazprom’s involvement in other major developments in Russia’s far east, notably the 38bn m3/yr Power of Siberia gas pipeline, which became operational at the end of last year. 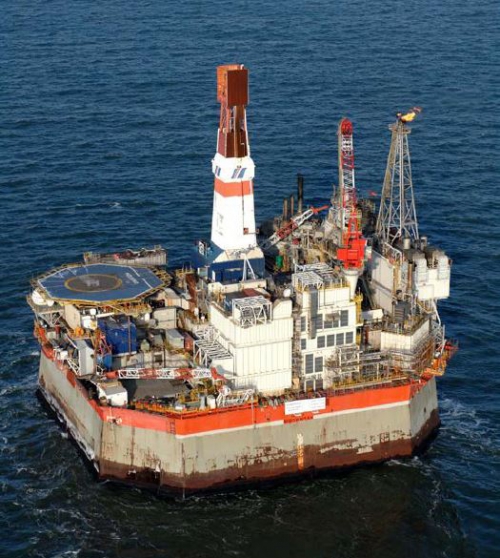 US sanctions imposed on Russia in the wake of the latter’s annexation of Crimea in 2014 include a directive which prohibits US trade with identified entities related to the development of Russian deepwater, Arctic offshore or shale projects which have the potential to produce oil. State oil company Rosneft, which is the operator of Sakhalin 1, and Gazprom, along with other Russian oil and gas companies, are also on the US’s Sectoral Sanctions Identifications list.

The Sakhalin II consortium’s original plan was to use gas resources from the Yuzhno-Kirinskoye field. However, this field was added to the US State Department’s sanctions list in 2015 on the basis that its development could yield significant oil resources. The field has not been developed.

Gazprom has also looked to the Sakhalin 1 project as a potential source of gas for a third train, but the Sakhalin 1 consortium has other ideas. Although again potentially made problematic by US sanctions, the consortium – ExxonMobil (30%), Rosneft (20%), Japan’s Sodeco (30%) and India’s ONGC Videsh (20%) – has plans for a 6.2mn mt/yr LNG plant of its own, which would be located at the port of De Kastri.

Gazprom itself also has major distractions in the form of the Power of Siberia pipeline. The company is in the process of developing and ramping up production from the multiple major fields which will feed the pipeline. The pipeline is expected to flow about 4.6bn m3 of gas this year.

The feeder fields include Chayandinskoye and Kovyktinskoye, which will be linked by a pipeline expected to be in place by the third quarter of this year. Gazprom is also in the process of constructing the Amur gas processing plant, which will treat the gas for the Power of Siberia. The pipeline is not expected to reach full capacity until 2025.

Gazprom has also started work on the design of a second Russia-China pipeline with capacity of 50bn m3/yr, suggesting that pipeline, rather than LNG projects, will remain its core focus, while Moscow focuses its LNG ambitions on independent gas producer and LNG developer Novatek.

As a result, and although no timeline has been announced by Rosneft for Sakhalin 1 LNG, it may be that Sakhalin will provide the state oil major with the opportunity to realise its ambition of entering the LNG market.