Despite the heightened price-driven influx of LNG into Europe last year and this, Europe retains under-utilised LNG import capacity, so any decision to build more terminals is always likely to raise at least an eyebrow.

Add into this geostrategic and environmental narratives -- east European states’ desire to reduce their dependence on Russian gas supplies; competition between Russian pipeline gas and pushy new kid on the block, US LNG; and the desirability of gas over potential renewable alternatives – and it is little wonder that the under-construction Krk Island LNG terminal in Croatia has generated its share of controversy.

However, comparison with Lithuania’s Klaipeda terminal, built in 2014, and Poland’s Swinoujscie facility, completed in 2016, is legitimate. Both countries wanted an alternative to a dominant pipeline provider. Access to LNG provides, depending on available volumes, a price cap on pipeline gas supplies, as well as an alternative import point in the event of disruption, political or physical, to the delivery of pipeline gas. 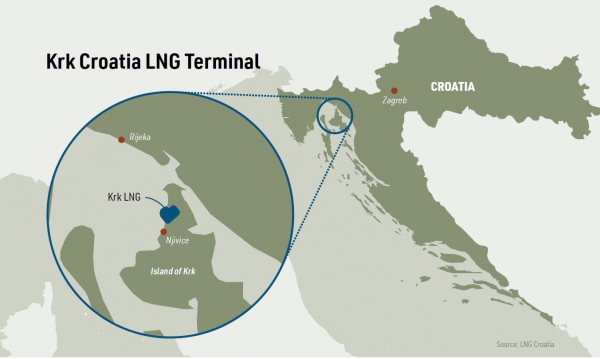 Moreover, excess LNG capacity serves a purpose – it has to exist to make the possibility of competition real and has arguably found justification over the last 18 months by enabling Europe to take advantage of the fall in LNG prices. Europe’s LNG import capacity is also geographically concentrated in northern Europe, where it is of limited benefit to south east European states, despite improvements in the overall interconnectivity of Europe’s extensive gas pipeline system.

The Krk LNG facility is not large by international comparison with capacity of 2.6bn m³/yr but it is big compared with total Croatian gas consumption of 2.8bn m3 in 2018. It could, in theory, meet nearly all of the country’s gas demand. However, the intention is not to displace pipeline supplies entirely, but extend the LNG option to other countries in the region.

Croatia has some gas production of its own from fields in the Pannonian basin and from offshore fields in the North Adriatic. According to the annual energy reports of the ministry of environment and energy, domestic gas met 39.6% of consumption in 2017 and 32.7% in 2018. But as its gas production continues to decline, Croatia will become more dependent on imported gas in the future.

Croatia’s gas system is already linked to Slovenia via the interconnection UMS Rogatec and to the much larger Hungarian gas market via the Dravaszerdahely-Donji Miholjac interconnection. Both formerly only allowed imports. However, gas can now be exported to Slovenia, while Croatia launched its first gas compressor station January 17, enabling it to pump gas to Hungary, according to Croatian transmission system operator Plinacro.

However, whether Hungary proves to be a demand centre for Krk LNG remains an open question. Hungary sourced 7.6bn m3 out of total consumption of 9.8bn3 in 2018 from Russia and has little choice but to renew its supply agreement with Russia’s Gazprom to meet its gas needs. Budapest has floated the idea of taking a direct stake in Krk LNG on a number of occasions, but talks on this and gas supplies appear to have foundered on the question of price. 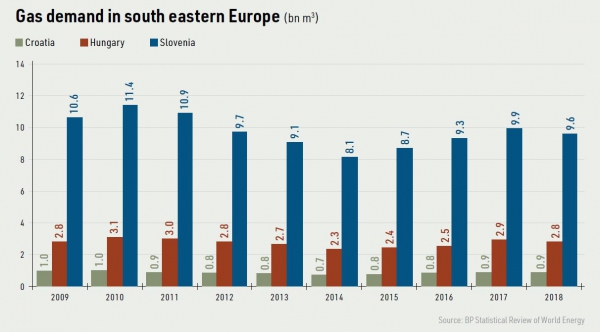 Meanwhile, Croatia is planning a new gas link with Bosnia. In February, Bosnia's gas firm BH-Gas selected a contractor to undertake a feasibility study and an environmental impact assessment of a proposed 160-km gas pipeline to Croatia.

A contract worth $500,000 was awarded to a consortium led by Croatia's Dvocut-Ecro, according to BH-Gas. It is funded with a grant from the United States Agency for International Development. Support will also come from the European Bank for Reconstruction and Development.

The pipeline, running from Zagvozd in southern Croatia to Posusje and Travnik in Bosnia, is due to be built by 2023-2024, according to BH-Gas, and will also have a branch to Mostar.

A larger Croatian strategic aim is construction of the 5bn m3/yr capacity Ionian-Adriatic Pipeline (IAP). This is intended to link the Croatian and Albanian gas systems with the Trans-Adriatic Pipeline, thereby connecting Croatia with the EU’s Southern Gas Corridor, which will source gas principally from Azerbaijan in the first instance.

Krk LNG is being built by LNG Croatia, which is owned 85% by state-owned Hrvatska Elektroprivreda and 15% by Plinacro. The total cost is estimated at just over €233.6mn ($253mn).

The project was designated as Project of Common Interest by the EU in 2013, allowing it to access funds from the Connecting Europe Facility (CEF), while financial support for Krk was approved by the European Commission in July last year. As a result, €101.4mn will come from the CEF, €100mn directly from the Croatian state budget, with the remaining €32.2mn provided as a direct equity investment by LNG Croatia’s two shareholders.

Key contractors are Belgium’s Tractebel, which completed the front-end engineering and design for the project back in November 2017; Golar LNG, which has a €159.6mn contract to provide the Floating Storage and Regasification Unit (FSRU); and a consortium comprising Pomgrad Inzenjering, Stsi-Integrirani Tehnicki Servi and Gp Krk, which was awarded the engineering, procurement and construction contract (€58mn) in January 2019.

Golar LNG is converting the 2005-South Korean-built Golar Viking LNG carrier, with the work being carried at the Hudong shipyard in China. The vessel has storage capacity of 140,000m3 and it was at Shanghai at time of press. Once converted, the FSRU will use the ambient waters of the northern Adriatic Sea to regasify the LNG at an expected rate of 300,000m3/hour.

In addition to the FSRU, clearance work for the gas and water pipeline corridor started in April 2019 and concrete works for the new jetty began in June. The jetty, onshore auxiliary buildings and a high-pressure gas pipeline to connect with the country’s transmission network are under construction and the new terminal is scheduled to begin import operations in 2021.