NWS was followed by Darwin LNG in 2006 and then, in 2012, Australia’s third LNG project was commissioned with a 4.9mn mt/yr Train 1 at Pluto LNG, this time using Shell’s propane pre-cooled mixed refrigerant design. 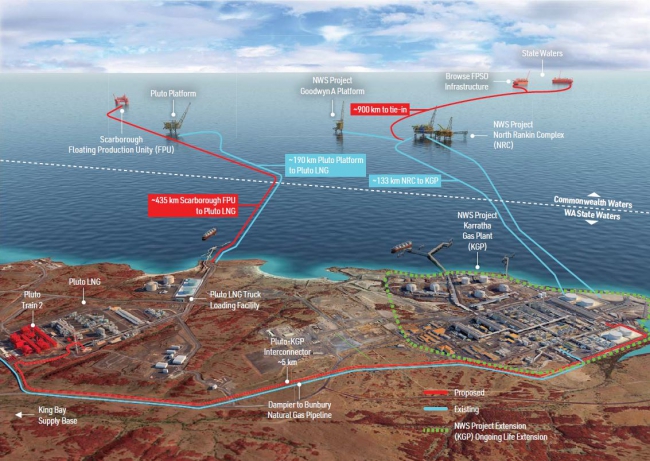 All three projects were front-runners, laying the basis for the great surge in Australian LNG, which saw 57.9mn mt/yr of capacity across seven major projects added between 2015 and 2019, propelling Australia into the top rank of LNG producers.

Being a trail blazer has its drawbacks … eventually, as technology evolves and resources deplete. Having been in operation for 20 years, securing a new lease of life for NWS started to become an urgent question. In addition, over the passing years, two new challenges had emerged: Australia needed more gas for itself; and the environmental impact had to be limited.

According to Australia’s Woodside, the operator of both NWS and Pluto LNG, the solution to these problems is Burrup Hub, a suite of projects centred on the existing Karratha Gas Plant (KGP).

All told, the project aims to develop 40 trillion ft3 of gross dry gas resources from Scarborough, Browse, Pluto and the NWS. The hub concept also aims to facilitate other offshore Pluto gas reserves and act as a processing and transmission point for third-party gas resources.

The Scarborough field contains an estimated 11.1 trillion ft3 of gross contingent resources, which will be developed with seven subsea wells in water depths of 950 metres, the dry gas collected by a floating production unit and piped about 435 km to the Pluto LNG facility.

This will support the existing Train 1 at Pluto and allow construction of a second 5mn mt/yr train, expanding the plant’s capacity to 9.9mn mt/yr.

A final investment decision (FID) on this project is targeted for the first half of this year and Woodside hopes to see the first cargo from Train 2 leave Australia’s shores in 2024. The offshore project proposal was resubmitted in October 2019 and included the adjacent Thebe and Jupiter reservoirs, which make up the Greater Scarborough area.

On January 6, Western Australia’s Environmental Protection Authority (EPA) recommended approval for a 32.7-km section of pipeline linking the Scarborough gas project with the Pluto LNG export plant, subject to a two-week public appeal period. The remainder of the pipeline, which lies in commonwealth waters, is subject to federal approval.

Woodside and BHP have also agreed a tolling agreement for processing gas from Scarborough. BHP owns a 25% interest in the WA-1 block in which the majority of the field lies. The agreement is valid until March 31. Woodside’s interest in Greater Scarborough comprises a 75% interest in WA-1-R, as well as a 50% stake in each of WA-61-R, WA-62-R and WA-63-R.

New gas for NWS will come from the Browse Basin, which contains the Brecknock, Calliance and Torosa fields, estimated to contain contingent resources close to 16 trillion ft3 of dry gas and 466mn barrels of condensate. 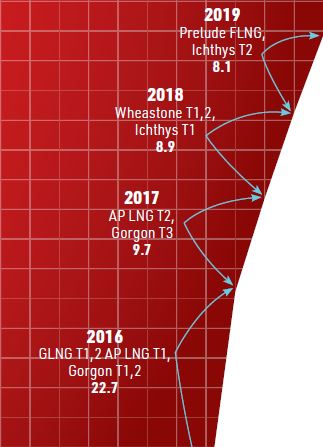 Lying about 900 km further offshore from the NWS platforms, Woodside has proposed two floating, production, offloading and storage vessels with gas piped 900 km back to the existing NWS infrastructure, allowing the production of about 10mn mt/yr of LNG/LPG and 1.4mn mt/yr of domestic gas. Final investment decision (FID) on this element of the hub project is expected in the first half of next year with first gas from Calliance and Brecknock projected for 2026, followed by Torosa in 2027.

Onshore, in addition to processing gas form Browse, KGP’s usefulness will be further exploited by construction of the Pluto-KGP interconnector, which will enable third-party gas from Pluto-connected reserves to be processed.

FID on this element of the hub has already been taken and Woodside has entered into contractual arrangements with DDG Operations Pty Ltd for the pipeline’s construction, which is expected to start up in first-half 2022.

KGP feeds gas into the Dampier-Bunbury gas pipeline, Australia’s longest at 1,600 km, which was commissioned in 1984. Owner and operator DBP rightly describes the pipeline as Western Australia’s most important piece of energy infrastructure, bringing natural gas far down the country’s western coast to Perth and beyond to its end point in Bunbury.

Domestic gas infrastructure at Pluto LNG will be increased to 225 TJ/d. In addition, an LNG truck loading facility was built in 2019 and is expected to start providing LNG for the domestic market this year, extending Western Australia’s options for gas use beyond existing gas pipeline infrastructure.

While Australia’s coal industry has long been the target of environmentalists, the huge growth in LNG output has made the industry a major source of greenhouse gas emissions in its own right.

Industry lobbyists, such as the Australian Petroleum Production & Exploration Association, are keen to press home the message that LNG exports are displacing higher carbon coal-fired power generation in Asian countries, but pressure has increased on the producers themselves to reduce their environmental footprint.

Upgrading Pluto and NWS in particular, given its age, presents opportunities for a more environmentally-friendly approach to LNG production, which Woodside is addressing through a variety of means, not least the appointment across its corporate structure of personnel charged with delivering sustainability initiatives.

These include building a carbon offset portfolio; investigating and developing carbon capture, utilisation and storage technologies; and focussing on energy efficiency to reduce emissions from existing operations. In October, Woodside signed a heads of agreement with Greening Australia on a programme which aims to plant 5,000 hectares of trees, primarily in Western Australia.

Woodside is also focussing on the power required to produce LNG. It says 70% of the emissions from KGP come from the fuel used to run the plant and about 7% of the plant’s gas production is used for power generation and to run compressors. Using renewable energy instead would both reduce emissions from the plant and increase saleable volumes of LNG.

One thing the Burrup Peninsula does not lack is sunshine and Woodside is looking at a combination of industrial-scale solar, batteries and high-efficiency gas reciprocating engines as a means of providing a stable, low-carbon electricity supply to its power hungry LNG and gas processing facilities. Woodside CEO Peter Coleman has also suggested that the company could pursue full electrification of its LNG compressors, rather than use gas-fired turbines, as has been proposed for the Kitimat LNG project in Canada, in which Woodside is a joint-venture partner.