LNG developers are slowly opening up Central American markets using a variety of strategies from AES’ hub-and-spoke model based on its LNG import terminals in the Dominican Republic and Panama to small-scale LNG supply chains and LNG-to-power projects.

According to a study published by the Oxford Institute for Energy Studies in November 2017, the potential market for gas/LNG in the Caribbean Islands and Central America is about 24.2bn m3/yr, of which Central America could account for 8.5bn m3/yr.

The terminal in the Dominican Republic, AES Andres LNG, came on line in 2003 with capacity of 1.9mn metric tons a year (2.5bn m³/yr), while Panama’s Costa Norte LNG was commissioned in 2018 with capacity of 1.5mn mt/yr. However, both terminals have been importing below full capacity. AES Andres LNG imported 0.9mn mt in 2018 and 1.2mn mt/yr in 2019, while Costa Norte took in 0.2mn mt and 0.4mn mt in 2018 and 2019 respectively, according to International Gas Union data.

With US LNG production still on the rise and many liquefaction plants sited on the Gulf Coast, Central America is perfectly positioned to receive cheap, short haul LNG from the US. However, a lack of existing gas transmission and distribution infrastructure, together with fragmented industrial demand, poor creditworthiness of national electricity companies and the damage inflicted by hurricanes have stifled the growth of larger supply chains.

Nonetheless, progress is being made. The next major step will be installation of a floating storage and regasification unit (FSRU) at the port of Acajutla in El Salvador.

The FSRU will be permanently moored via a modified spread mooring system and will have a natural gas pipeline running to a 378-MW gas-fired power plant. This, in turn, will be connected by a 44 kilometre, 230 kV transmission line to the country’s electricity grid.

Singapore's Keppel Offshore & Marine will carry out the LNG carrier conversion. FSRU Development, a joint venture between Singapore's BW LNG and the US' Invenergy Investment, awarded the contract on September 22.

Invenergy is developing the Salvadorean LNG-to-power project along with local partners Grupo Calleja, VC Energy de Centroamerica and Quantum Energy. Financing for the scheme was closed in December and first electricity from the power plant is due before the end of 2021. Shell will supply the project with LNG.

The FSRU will be moored 1.2 km offshore. LNG carriers will moor directly to the FSRU, unloading using flexible hoses.

The gas-fired power plant will have 19 Wartsila 18V50SG internal combustion reciprocating engines with capacity of 18.9 MW each. In addition, a combined steam cycle turbine will provide a further 26 MW of generating capacity, using the engines’ exhaust heat.

According to infrastructure investor IDB invest, the associated gas-fired power plant will be the lowest cost thermal generator in El Salvador. The plant will meet around a third of the country’s electricity demand and help it reduce its dependence on imports and generation from fuel oil and diesel. The plant will also provide stability to an electricity system likely to see an increase in variable renewable energy generation.

El Salvador had 575 MW of hydro power installed in 2019, making up more than a quarter of the system total of just over 1.8 GW. Two of the larger plants, 5 de Noviembre (99.4 MW) and 15 de Septiembre (180 MW) are run-of-river plants and generate electricity primarily in the rainy season which runs from May to October. The country also has 204 MW of geothermal capacity, which provides baseload power generation. 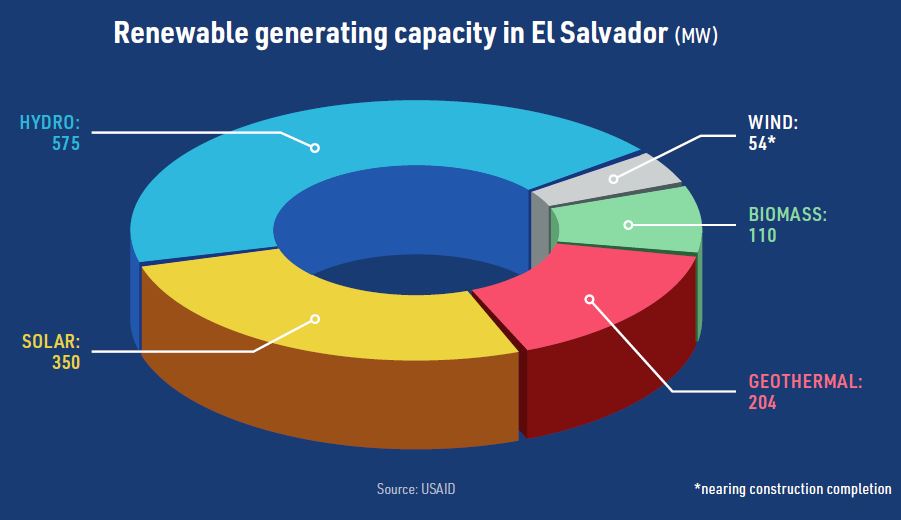 El Salvador’s population of around 6.5mn has a high level of electricity access – over 98% in urban areas and 86% in rural areas. Based on 2017 data, generation, as oppose to capacity, was 24% hydroelectric, 22% geothermal, 19% thermal (fuel oil and diesel), 7% biomass and 1% solar. Around 26% of the country’s electricity demand was met by imports, the net total of which amounted to 1.58bn kWh, mainly sourced from Guatemala via the Central American Electrical Interconnection System (SIEPAC), which links the power grids of six Central American countries.

The government is promoting renewable energy in addition to LNG as a means of reducing its dependence on imports and oil-fired generation. The first turbine of the country’s first wind farm was installed at the end of August. The Ventus project will have total capacity of 54 MW when completed. Ventus was the only wind project to secure a power supply contract in the country’s 2017 renewable energy auction, which also saw 120 MW of solar capacity awarded contracts. The country already has around 350 MW of solar power installed and 110 MW of biomass plant.