Shale gas producers in the Appalachian Basin are still seeing production grow, but an increasingly difficult operating environment means that the pace of expansion is set to slow down. New takeaway capacity out of the region has helped to push up regional prices, bringing them more in line with the Henry Hub benchmark. However, the impact of this is unlikely to go far enough to offset the other difficulties that Appalachian drillers are facing.

Indeed, the increased availability of pipeline capacity allowed output from the basin’s Marcellus and Utica plays to grow with fewer constraints, contributing to domestic oversupply and ultimately weighing on natural gas prices nationally despite helping them locally.

In its latest forecast, the US Energy Information Administration projects that the Appalachian region will produce 32.6bn ft³/day. This marks an increase of 367,000 ft³/day from the agency’s projection of 32.2bn ft³/day for August, but the EIA had previously forecast that August production would hit 33.0bn ft³/day. A scaling back of growth expectations can therefore be seen already. 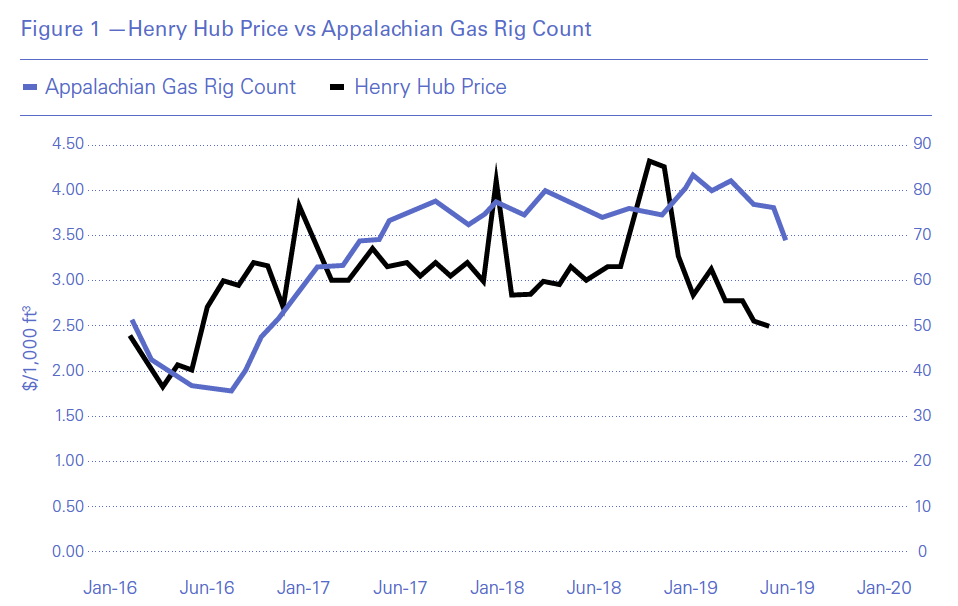 Meanwhile, Henry Hub prices have steadily declined over the course of the year, from an average of $3.22/’000 ft³ in January to $2.46/’000 ft³. The downward trend in prices has coincided with gas drillers in Appalachia – and elsewhere – trimming their growth plans for the remainder of this year and beyond. However, a Rystad Energy partner and vice president of analysis for shale research, Artem Abramov, told NGW that wellhead economics are not the primary driver of this trend.

“The Marcellus – and some parts of the Utica – offer some of the best prices in the US, so even if gas prices go down to $1.5 per mn British thermal units [$1.6/1,000 ft³] it will still be economically rational to drill some of these wells,” he said. However, drilling at such low prices results in returns taking a hit, at a time when many producers are under pressure from investors to keep spending within cash flow.

“Activity is always driven by the gas price environment and now [producers] high-grade activity even more to stay within their cash flow balances,” Abramov said.

Some of the most prominent names in the Appalachian Basin appear to be taking this approach, which is expected to continue into next year, including EQT Corp., Range Resources, Cabot Oil & Gas and Southwestern Energy.

The expansion in takeaway capacity out of the Appalachian Basin over the past year has certainly helped drillers in terms of pushing up regional prices after years of having their growth constrained by a local glut and limited pipeline space. 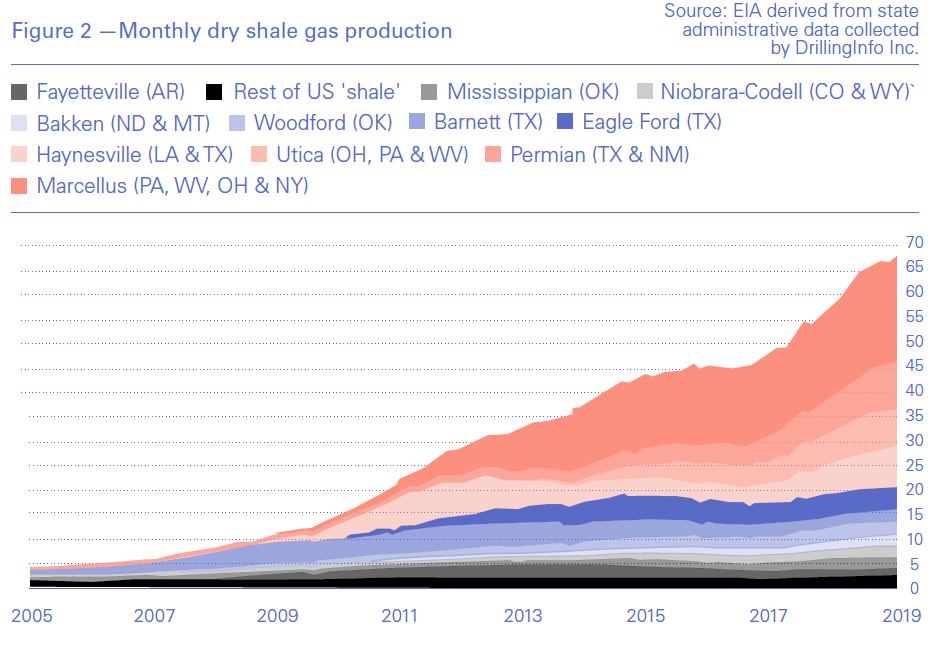 Around 5bn ft³/day of pipeline capacity is estimated to have been added to the region in the second half of 2018. But with regional prices closer to Henry Hub prices, it became more profitable during the first half of this year to sell gas locally on the spot market than to ship it out of the basin to sell at a marginally higher price. This put more pressure on those drillers that have long-term contracts to ship gas out via pipeline, while those with fewer transportation agreements could benefit from selling gas locally on the spot market.

Being locked into long-term transportation contracts also makes it harder for producers to scale back drilling activity if gas prices dictate it. Indeed, Range’s CEO, Jeff Ventura, sought to reassure investors on a conference call in February by saying his company did not have “excess transportation agreements or other forces” that would force it to favour growth over free cash flow.

However, there is also another that needs to be considered when assessing the price trends that Appalachian producers benefit from. “Historically, all the largest Appalachian producers had very comprehensive hedging strategies,” noted Abramov. This allowed them to realise better gas prices even when local prices were low, but the improvement in regional pricing has had an impact on this.

“This year, given that differentials no longer exist and the gas price environment at the country level has degraded, they are not really able to realise any positive results on the hedging side,” Abramov said.

This comes after three years of Appalachian producers achieving gains from hedging, and while some drillers will continue to hedge, the trend stands to be reversed this year.

The difficulties that producers in Appalachia – and elsewhere in the US – are grappling with lead to questions over whether it is even still worthwhile to pursue shale gas development. Natural gas prices are anticipated to remain low for some time, and with investors putting more and more pressure on drillers to prioritise returns, shale does not look like a particularly profitable game.

“It is a very competitive market environment,” Abramov said, adding that the main focus of shale gas companies now was achieving further efficiency and productivity gains – which they still have the capacity to do. “The one that is able to advance faster on this learning curve will be able to achieve better returns on investor capital eventually,” he said.

It had been hoped that the handful of US LNG export terminals starting up recently would drive up demand for natural gas and help boost prices. Indeed, demand is at an all-time high, thanks in part to liquefaction facilities, but also to power generators switching from coal to gas. At the same time, though, the oversupply in the market continues to weigh on prices even as demand rises. A second wave of US liquefaction capacity is under development, but the pace of construction is not rapid enough to address the current oversupply.

“The demand from an LNG perspective is increasing, and there is quite a strong pipeline of new projects coming online, but we now always have this mismatch between how quickly supply is able to respond in the US and how quickly LNG exports are able to catch up,” Abramov said.

The expectation is that the Permian Basin will be the only region where shale gas output will grow in a more unrestrained manner, and this is because it is a by-product of drilling for oil there. For drillers elsewhere, including the Appalachian Basin, the near term is characterised by moderation of activity and the ongoing pursuit of efficiency gains.

SDX Notches up Another Moroccan Success