Europe may be shifting more towards a lower-carbon use of renewables backed up by natural gas, but Poland took a step in the opposite direction July 12 with a further investment in super-critical coal.

US turbinemaker GE said it had signed a $1.6bn (zloty 6bn) contract to deliver the 1-GW "ultra super-critical" coal-fired plant with Elektrownia Ostroleka, 50-50% owned by Polish utilities Energa and Enea.

“This is an important investment on behalf of Energa and Enea,” said Edward Siurnicki, president of Elektrownia Ostroleka: “Together, we have several years of hard work ahead of us. We are convinced that with GE’s experience, we will be successful and have a new plant operational in 2023."

GE said the new Ostroleka-C plant would deliver 46% electrical efficiency – 13 percentage points better than the global average for coal – but as many points below the 58%-61% electrical efficiency achieved by latest combined-cycle gas turbine (CCGT) units. The new plant would be able to "reach full load in less than 30 minutes," added GE. Energa's release quoted Poland's energy minister Krzysztof Tchorzewski saying: "Modern plants of this type increase the stability of the energy system and balance the demand for energy in the coming years; such investments enable the development of renewable energy sources."

The US embassy in Warsaw's economic attache John Armstrong (not shown below) was among the dignitaries who also attended a signing ceremony in Ostroleka, a city in northeast Poland. 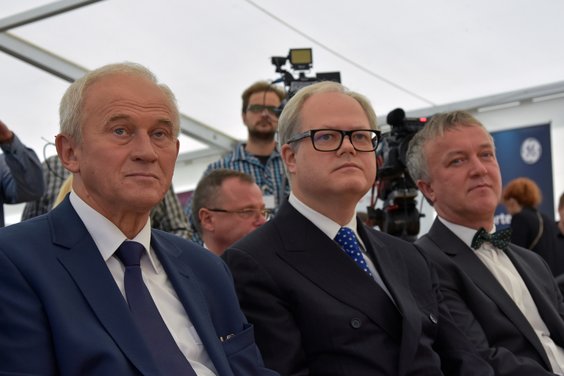 GE on July 4 announced it will also provide boiler and steam turbine technology for Pakistan’s first ultra-supercritical power plant (to be fuelled with lignite, rather than coal) near Karachi, which will add up to 660 MW capacity by 2021 and is to be built by Chinese contractor Sepco III.