Brazilian state-owned oil company Petrobras has been carrying out an ambitious divestment plan in order to cut its role in the oil and gas market. Low oil prices and the need to pay off debt have forced it into retreat.

Since June, the operator has launched the sale of six new asset packages, including mature fields, thermal power plants, and exploration blocks. The company is also working to open up the refining and natural gas segments.

In fact, Petrobras' monopoly in the oil and gas market in Brazil has been challenged since the 90s. The first step was the Petroleum Law, from 1997, that ended the company's legal monopoly over exploration and production and allowed investment from companies other than Petrobras. Today, roughly a quarter of oil and gas production in Brazil is from other local and international oil companies. This ratio will become more balanced if the operator's plan to sell its assets succeeds.

According to Petrobras, the company has five objectives in reducing its role: maximising portfolio gains with a focus on world-class assets in deep and ultra-deep waters; cutting its cost of capital; pursuit of low costs; meritocracy; the environment and safety.

Following the ongoing steps towards the goal of becoming a smaller company, Petrobras announced in September 2020 the revision of the Exploration & Production (E&P) segment portfolio in the face of the crisis caused by Covid-19.

According to an official statement, the portfolio revision is in line with the price assumptions disclosed in the first-quarter results. Its focus is on deleveraging to reach the gross debt target of $60bn in 2022; prioritising projects with a Brent crude breakeven price of no more than $35/barrel; and a revision of the company’s entire investment and divestment portfolios.

During an interview with Valor Economico, a Brazilian newspaper, Petrobras CEO Roberto Castello Branco said that the Covid-19 pandemic had delayed sale negotiations of the eight refineries offered by the company. The executive, however, said he still expects to sign the contracts later this year.

He said there was no evidence of withdrawal by investors who expressed interest during the non-binding phase. "But it may be that one or the other contract will slip into 2021," he cautioned. The intention of the state-owned company is to conclude the sale next year.

Mid-September the state-owned company received binding proposals from the RLAM refinery, in Bahia. According to Castello Branco, the bids met expectations. "We are happy with the proposals received. There weren't many offers. But there is no reason to be discouraged. On the contrary, we were excited. It was the first major asset put up to be sold this year, given such a complex scenario for the global economy and for the oil sector."

Castello Branco also said that he is intending to sell Gaspetro and Brazil-Bolivia Gas Pipeline "We have already received proposals and the divestment process proceeds normally. It is possible we will have a deal by the end of this year," he said.

"Our strategy is to divest where Petrobras is not a natural owner. This includes mature fields both onshore and in shallow waters. We want to sell all of these assets. Petrobras' vocation and expertise is in deep and ultra-deep water fields," the Petrobras CEO added.

Petrobras intends to reduce the number of employees by about a third, to 30,000. According to Petrobras, the company's divestment program has reached $16.3bn.

Though achieving some success in the goal of reducing its role in the Brazilian gas market, Petrobras is keeping its de facto monopoly. It remains the only natural gas supplier, with control over the whole gas supply chain infrastructure.

Petrobras has a plan however to divest many of its gas assets, a process that started in 2015. A decisive point of this process was in 2019 when the company signed a commitment with the Brazilian antitrust authority (CADE) to sell the whole of its participation in the gas transportation and distribution segment, and also to allow access to interested third parties in essential gas supply infrastructure.

Petrobras has already sold its participation in the two main gas transportation companies (NTS and TAG) and is leasing out one of its LNG regasification terminals.

The movement to open the gas market in Brazil started in 2016, with debates about the regulatory reform.

"This process is still ongoing, but progress has been made with the lower house’s approval in early September of a Gas Bill. The act is now in the upper house, and expectations are that it may be approved this year," said Yanna Prade, partner at Prysma E&T Consultores, a consulting company based in Rio de Janeiro. House deputy Laercio Oliveira said the changes would streamline the development of new gas pipelines and increase gas production, which came to nearly 26bn m3 last year.

The regulatory reform will establish a competitive market for natural gas, and there is no way back to Petrobras' de facto monopoly. It might take some years to get there, but there is great effort from Brazilian institutions to set up the rules of the game as soon as possible.

According to the consultant, the opening of the gas market in Brazil is essential to improve competitiveness and natural gas demand growth. "Asset sales have included many assets in the gas supply chain which urged a regulatory reform. Natural gas in Brazil is one of the most expensive in the world: in June 2020, the industry paid on average nearly $10/mn Btu – and even that is after taking into account the lower price of Brent crude. Last year the price was around $15/mn Btu. The lack of competitiveness led gas demand to stagnate since 2010. In fact, because of high gas prices, large consumers were considering switching to other fuels, like biomass, and some even did so. It is a disaster for the gas market," she said.

To Prade, the ongoing liberalisation process of the Brazilian gas market has the potential to radically change this scenario. "Petrobras will still have a relevant role, but we see a lot of interest from other players, both national and international, in entering this market, which will bring new approaches, new types of contracts, and competition. "That makes it important to have great investments in logistics, transportation and LNG imports are the key segments where Petrobras is reducing its presence and will have a great impact on the gas sector," she said.

For the Brazilian association of gas distributors (Abegas), the ongoing gas liberalisation process is the means lower prices as new suppliers enter the market. However its director of market strategy Marcelo Mendonca points to the importance of having an efficient infrastructure pattern.

Most of the gas produced domestically comes from some 300 km offshore, where the large pre-salt reservoirs are, but there is not enough pipeline capacity to bring the gas to the coast. As a result most of it is reinjected. "Technically speaking, reinjection is a good process because it increases the reservoir pressure, thus restoring the desired level of production and stimulating the recovery of additional crude oil. But today, 53mn m³/ day are reinjected as there is a lack of infrastructure," Mendonca said. 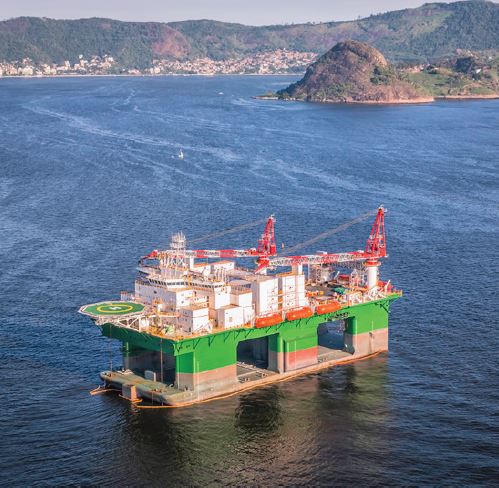 But there is also onshore production for sale. Its latest disposal was announced in late August, when it disposed of 27 onshore exploration and production concessions in Espirito Santo to Brazilian independent Karavan Oil and private equity group Seacrest Capital.

Karavan and Seacrest will operate the assets, collectively known as the Cricare cluster, through a 51:49 joint venture. They are to pay up to $155mn, with an initial downpayment of just $11mn and another $26mn when the deal is closed. But most of the payment will be in contingency payments.

According to Petrobras, the Cricare cluster produced around 1,700 b/d of oil and 14,000 m3/d of gas in the first half of the year.

Among its international assets it is selling is its 44% interest in the Tayrona block in the Guajira basin of northern Colombia. Bidders that are qualified for the tender will receive instructions on the divestment process, including guidelines on due diligence and the submission of proposals.

Petrobras is working at Tayrona, which has gas, with state-owned Colombian partner Ecopetrol, which has a 55.6% interest in the block. The pair have outstanding exploration commitments at the site, including the drilling of one well, which Petrobras said mid-September has "the potential to prove significant volumes of gas." The two countries share a border.