The recent discovery in September 2021 by Mineral Resources at the Lockyer Deep 1 well in EP 368 highlights the continued success in revisiting previously drilled structures and targeting the deeper Permian play. The well, which was primarily targeting the Kingia and High Cliff sandstones within the Lockyer Deep/North Erregulla Deep structure, encountered around 20 m of net as pay from a depth of 3,888 m TVDSS, with an average porosity of 16%, up to a maximum of 28%. A gas gradient within the pay zone indicated a gas column of up to 800 m within the entire structure. In mid-October 2021 Mineral Resources announced its intention to conduct an extended flow test in the coming weeks; this is to confirm the discovery, which is possibly in excess of 1 trillion ft3.

What lead to the resurgence of exploration in the Perth Basin?

The Perth Basin is a north-south trending, onshore and offshore basin extending about 1,300 km along the southwestern margin of the Australian continent. In general, there were three extensional periods punctuated by post-rift subsidence in the Early Permian to Early Cretaceous, followed by a fault reactivation in the Miocene.

The first episode of rifting during the Early to Middle Permian resulted in the formation of a series of roughly northwest to north-northwest oriented half-grabens. Within these half-grabens, the High Cliff Sandstone and Kingia Sandstone reservoirs were deposited. Recent exploration has targeted these plays with high success, leading to the resurgence of exploration activities.

The successful discovery of the Waitsia gas field in 2014 was the first to uncover the potential in these deep gas reservoirs. Ongoing appraisal success at the field was instrumental for further exploration and evaluation in the surrounding acreage.

Gas discoveries within the Kingia and High Cliff reservoirs followed the same course as Waitsia, with operators re-evaluating structures that initially had some shallower stratigraphic success. This proved to be the case in 2019 with the first discovery in the deeper plays since Waitsia: the Strike Energy operated West Erregulla 2 well in EP 469. The well was drilled to primarily evaluate the deeper Permian sandstones, beyond the previous success of West Erregulla 1, which was drilled in 1990. The well uncovered double-digit gas pays across both formations (as well as the Wagina Sandstone) at measured depths exceeding 4,700 m. Subsequent appraisal of the field allowed for development planning, particularly from the Kingia Sandstone.

Success in the Kingia Sandstone was also occurring elsewhere in the basin in 2019, via Beach Energy's onshore Beharra Springs Deep 1 well within the L 11 contract. Another well to evaluate stratigraphy beneath proven, younger, and in this case producing, reservoirs. The exploration well was drilled in early October 2019, encountering a 65 m reservoir interval within the Kingia unit, between 3,935 and 4,000 m, with the operator reporting estimated net gas pay of 36 m.

Are developments progressing for these earlier discoveries?

Some success through development has been seen with these earlier discoveries:

What are the commercialization pathways for Lockyer Deep?

The Lockyer Deep discovery joins the other recent gas discoveries in the Perth Basin - it too will need to find a market for the gas. The proximity of the fields to Perth would make this the obvious demand centre but, as with earlier discoveries, access to this market is proving challenging due to the existing supply from the domestic gas plants associated with the major LNG projects on the west coast. Another option would be for the gas to provide backfill to one of the LNG liquefaction plants. However, in August 2020, the Western Australia Government introduced a policy that prevents export of onshore gas production in Western Australia to either the Eastern States or overseas. A special dispensation was given to the Waitsia project to allow gas to be processed at the Karratha gas plant (NWS LNG) and for export as LNG for a period of five years.

One potential pathway to commercialization would be for the policy limiting the export of onshore gas production to be adjusted. This could be influenced by the development timelines of the large undeveloped offshore assets, including Scarborough and the Browse Project, that are earmarked as backfill to some of the key liquefaction plants. If these were to be delayed, then the case to allow Perth Basin gas to fill this spare capacity will grow.

We have previously discussed the disruption of the backfill options for NWS LNG and Pluto LNG. Woodside have announced that FID for the Scarborough development is planned before the end of the year. However, the proposed merger of Woodside and BHP's Petroleum business could have an impact on this timeline as it would see Woodside (as the merged company) increase its holding to 100% equity in both the Scarborough field and the proposed Pluto LNG train 2. With a current CAPEX estimate for $12 billion of the combined development, this would be a significant investment for Woodside to take on solo, and partner(s) may be required before FID can be taken. In addition, BHP Petroleum bring to the table a number of other new development opportunities, particularly in the Gulf of Mexico and Trinidad & Tobago, that will compete for the investment dollars of the merged company.

What's next for the Perth Basin and are there low carbon emission projects planned?

Companies have also been looking at utilising the basin for projects that will contribute towards Australia's carbon reduction goals. One operator focussing on these opportunities is Pilot Energy, which is planning both a CCS project, via its proposed Harvey CCS Project (South West CCS Hub), and a hydrogen project via the Mid-West Integrated Renewables and Hydrogen Project.

The South West CCS Hub is a Western Australian Government sponsored project and Pilot is evaluating the possibility of the sequestration of 800,000 tpa of CO2 over a period of 30 years within its 100% held tenures. Sources for CO2 would come from a proposed hydrogen production facility, northern Perth Basin gas fields and potentially other industrial sources. The fluvial Lesseur Sandstone, deposited during the widespread regression in the Triassic, is the targeted saline aquifer for CO2 storage in the southern basin.

The latter Pilot proposal will involve a project comprising offshore wind power generation, onshore solar power generation, blue/green hydrogen at Arrowsmith and CCUS/CCS at the Cliff Head oil field. The focus is likely to be hydrogen production, supported by locally derived natural gas sources and associated CCS at Cliff Head, and green electricity as part of the project design.

Strike Energy is also looking at the possibility of using the Perth Basin to help in its commitment to achieving net zero across its Scope 1 and 2 emissions by 2030 and aspiring to deliver full Scope 3 emission offsets. In the Perth Basin it has outlined Project Haber, which comprises a proposed 1.41 Mt/yr urea fertiliser production facility. The facility will supply fertiliser to Australia's agricultural industries by processing Strike's Perth Basin gas resources. The natural gas is planned to be converted to ammonia with urea manufactured from blue and green hydrogen. Once Project Haber exceeds green hydrogen feedstock in excess of 40% (estimate around 2033), the plant will be required to import CO2 for continued urea production, up to around 500,000 metric tons/yr of CO2. This could act as a significant CO2 sink for neighbouring heavy industries. 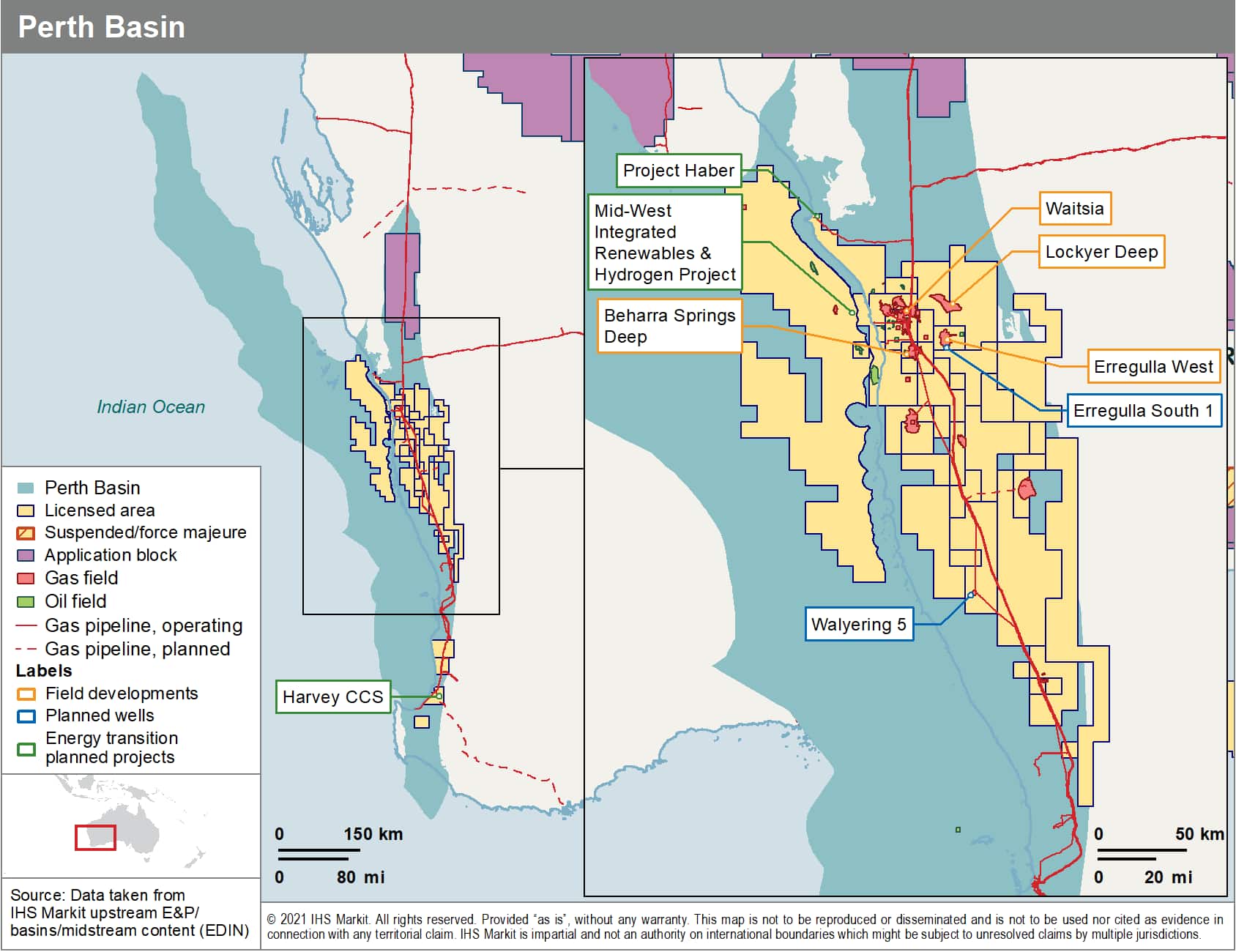 Venice ropes in Marubeni for its South Aussie LNG project