The favourable environmental assessment recently issued for the Double E natural gas pipeline, proposed for the Permian Basin, comes at a particularly uncertain time for both oil and gas production in the region.

The regulatory review process continues, with federal regulators scheduled to issue a final decision on the pipeline later this year. However, market turmoil sharply increases the likelihood of new infrastructure projects being delayed or scrapped.

Gas is a by-product of oil drilling in the Permian, and this makes output in the region particularly vulnerable to crude price volatility. Permian producers were already scaling back capital spending and activity when West Texas Intermediate (WTI) oil prices fell below $40/barrel in early March. Since then, market conditions have worsened, exacerbated by a collapse in oil demand as a result of the coronavirus (Covid-19) pandemic and by storage capacity filling up.

On April 20, WTI prices fell into negative territory for the first time, settling at -$37.63/barrel, compared with $18.27 on the previous day of trading. But while prices recovered somewhat on April 21, the June contract also took a battering, trading as low as $6.50/barrel at one point that day. These price movements come amid warnings about US oil storage capacity filling up, and these market conditions will result in further cutbacks in activity by Permian drillers.

Investment bank Morgan Stanley warned in a note that recent US supply cuts so far amounted to only a fraction of what will be required to avoid “tank tops” in the second quarter of 2020. The bank estimates that cuts of roughly 1.0-1.5mn b/d, or 8-12% of US output, are needed. 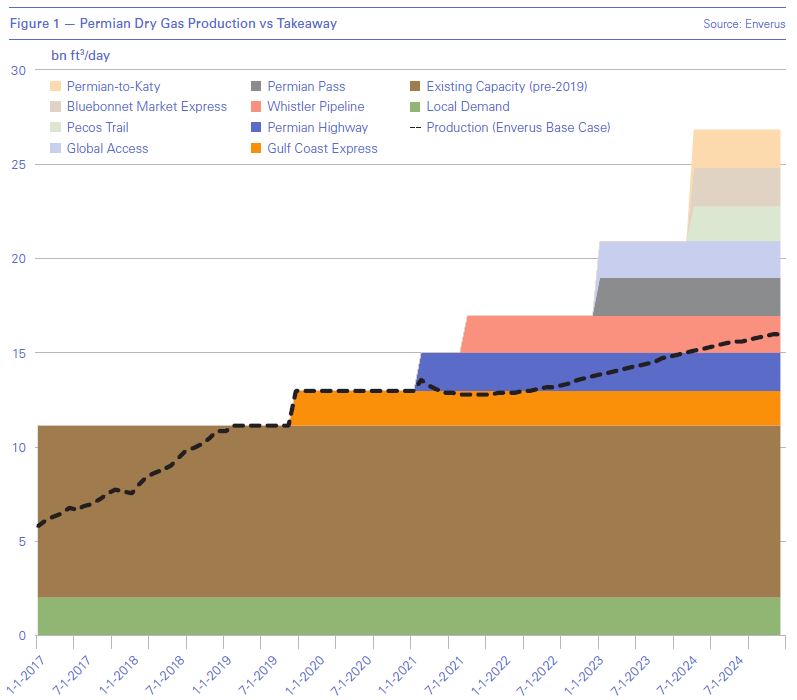 It remains to be seen how much US producers will cut, but shale is expected to feel the brunt, given how easily unconventional activity can be scaled up or down. As the Permian dominates US production, the basin is already playing a significant role in this and will continue to do so. Of the 226 oil rigs that have been taken offline in the US between March 20 and April 17, 122 were in the Permian, according to data from oilfield services firm Baker Hughes. And as these oil rigs go offline, associated gas production also suffers.

Data company Enverus anticipates declines in gas production in the Permian to continue over the next two years as WTI prices remain low. “Starting in 2022 is when the crude oil market is expected to come back closer to balance,” Enverus’ manager of strategy and analytics, Maria Sanchez, told NGW. “Enverus expects WTI prices to average $45/b in early 2022, and this will bring the Permian back in the money and the return of gas production gains,” she said.

On the Double E

Falling gas production in turn threatens the outlook for new pipeline capacity. It is under these circumstances that the Double E pipeline recently took a step forward in the regulatory review process.

The US Federal Energy Regulatory Commission (Ferc) issued a favourable environmental assessment for the Double E pipeline on schedule in late March, ruling that the project would not “significantly affect the quality of the human environment”.

Public consultation on the environmental impact is now underway, and Ferc has set a 90-day deadline for other agencies issuing federal authorisations for Double E. The project’s developers asked the federal agency for a final decision by July 31. If this is issued as expected, it would allow work to begin in September 2020, with the pipeline entering service within twelve months. However, deteriorating market conditions in the basin could prompt a rethink of this timeline.

The 135-mile pipeline would connect the Permian’s Delaware sub-basin to Waha, the basin’s gas hub, from where gas can be transported on to the US Gulf Coast via connecting pipelines. Double E would have the capacity to carry up to 1.35bn ft3/day of gas. A subsidiary of Summit Midstream Partners owns a 70% stake in the pipeline, with an ExxonMobil unit holding the remaining 30%. A Summit spokesperson told NGW that the company was unable to comment publicly on the pipeline’s status at this time.

The Double E project is one of three planned pipelines – both oil and gas – that ExxonMobil had previously talked up as supporting its aggressive expansion plans for the Permian Basin. However, even before WTI began its slide into the $30s/barrel and below, the super-major announced that it was slowing its pace of development in the basin. That plan, unveiled in early March, involved Permian production growth being scaled back by about 10% over 2020-21, even though the company would maintain its target of 1mn barrels of oil equivalent/day from the basin by 2024.

As crude prices tumbled further, the company once again revised its plans, cutting $10bn or 30% from its capital expenditure budget for 2020 in early April and saying that the Permian would account for the largest share of the reduction.

Further details have yet to be provided, but as ExxonMobil’s activity in the basin falls, its gas pipeline capacity needs will become less urgent, especially as it is also involved in the Kinder Morgan-led Permian Highway project.

Enverus’ Sanchez noted that the 2bn ft3/day Permian Highway, which is expected to start service in the first quarter of 2021, is the only Permian takeaway pipeline currently under construction.

Meanwhile, a final investment decision (FID) has been reached on the Whistler pipeline, which is being developed by MPLX, WhiteWater Midstream and a joint venture between Stonepeak Infrastructure Partners and West Texas Gas. Whistler will also have a capacity of 2bn ft3/day, and while Enverus expects this project to move forward, it believes the start date would likely be pushed back from 2021 to 2022.

“The rest of the pipelines are at risk of not coming online,” Sanchez said. “Kinder Morgan already announced that they have no shippers on their Permian Pass pipeline. Global Access is a Tellurian project and with the lack of global LNG demand, it’s very unlikely to move forward,” she added.

It is worth noting that Double E is not included in Enverus’ assessment of Permian takeaway capacity as it is an intra-basin pipeline. (See chart)

The Permian has been struggling with a gas glut for some time, leaving pipeline developers scrambling to bring new capacity online while flaring of excess gas reached record highs. The current downturn will slow the momentum behind the pipeline build-out, but the bottlenecks are not expected to be alleviated immediately. That glut has impacted prices at the main Permian trading hub at Waha: after struggling to stay in positive territory through much of this year, the Waha price fell sharply into negative territory on April 20, reaching -$4.74/mn Btu for the April 21 gas day.

“In 2020, production is right at capacity and gas flaring definitely happening,” said Sanchez. “However with production starting to decline, we expect flaring to decrease, but production will likely remain very close to capacity in 2020.”

The drop in flaring is being held up as one benefit of the current downturn. Preliminary data from consultancy Rystad Energy show flaring in the first quarter having already fallen to levels not seen since the third quarter of 2018.

“The worst level of gas flaring is definitely in the past,” Sanchez said. “As declines are expected in the next two years, no significant amounts of flaring are expected. Longer term, it will depend on the completion of additional pipeline capacity.”