Papua LNG yet to reach take-off

The consortium behind the 8.1mn mt/yr Papua LNG comprises three companies: Total, ExxonMobil and Oil Search, with the state also likely to take a stake in the venture.

Two of the project’s three trains will be supplied with gas from Total’s Elk and Antelope fields on licence PRL 15, while the other train is to be fed from ExxonMobil’s P’nyang field, which already supplies the existing PNG LNG plant. The three new 2.7mn metric ton per year Papua LNG trains would be built next to the PNG LNG facility.

Apart from building the three new trains, which would double the country’s LNG capacity, the project involves extending the quay of the existing LNG terminal and adding new LNG storage capacity and condensate tanks. Given that the trains will be built at the same location as the existing plant, the environment impact assessment (EIA) should not take as long as the two years it took to complete the EIA on the original project. 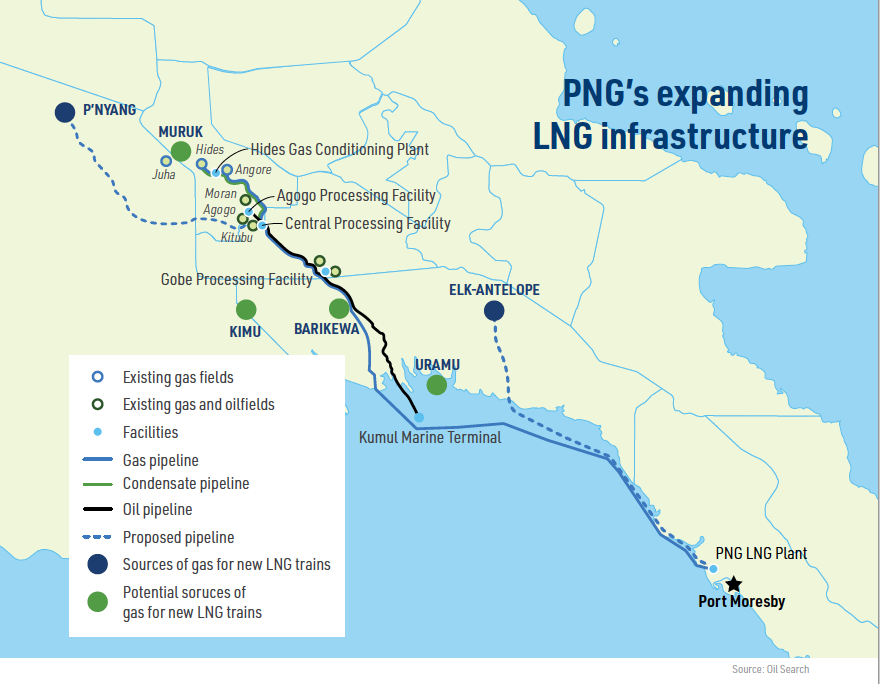 The project’s timetable and future were thrown into some doubt in August, when new Prime Minister James Marape pledged to secure a better deal with Total, just three months after coming to power. Possibly because of a warning from Oil Search that delays could increase costs, the government agreed in early September to abide by the agreement that the previous administration had signed with the project consortium in April.

However, the government said that it had secured concessions from the French firm, including on local procurement of services and equipment, and on allocating the government an equity share in the project’s pipelines. Minister of Petroleum Kerenga Kua said the investment consortium was also now prepared to consider setting up an LNG carrier joint venture with the state and had agreed to talk to any companies that wanted access to the project’s pipelines in the future.

Kua said: “The government has now cleared Total to proceed full steam ahead with the implementation of the Papua Gas Project.” A number of amendments were made in October to existing gas legislation, including tax and duty regimes, to allow the project to commence.

On November 15, Kua said the government was about to start talks with ExxonMobil over improved terms for the state from its side of the venture.

He said: “All things going well we can expect to sign a P’nyang gas agreement around the end of this month [November]”. In a statement, ExxonMobil said the consortium could now proceed to negotiating the terms of the final project development plan with the government.

However, on November 22, the Australian Financial Review reported that the talks had stalled, potentially delaying the project. According to the news report, Kua in a statement expressed "disappointment" with the talks’ progress after ExxonMobil, "refused to consider the state's proposed terms".

Kua said the terms, which were not disclosed, were "based on international best practice". According to the news report, they are understood to involve a higher tax rate and larger domestic gas requirement than previous agreements.

The proposed expansion of PNG’s LNG production and export capacity is dependent on the successful conclusion of both the Papua LNG and the P’nyang gas agreements.

ExxonMobil said discussions with the PNG government were continuing. "An agreement is needed before decisions can be made regarding front-end engineering and design for the three-train development at the PNG LNG plant site," an ExxonMobil spokesperson told Australian Financial Review.

Although pre-front end engineering and design (FEED) work has been completed, the FEED stage itself has been delayed. The government and investors say they are “committed to its timely completion” but have not yet agreed a timetable. A final investment decision is expected next year.

Investigations by the current government into its predecessor’s gas dealings continue. The PNG government has delayed its enquiry into a A$1.2bn ($819mn) loan taken out to fund the government’s purchase of a 10% stake in Oil Search in 2014, under former prime minister Peter O’Neill. The enquiry, which was ordered by Marape when he came to power, was due to begin in October, but the enquiry commissioner, Salamo Injia, said that officials had failed to instruct an overseas law firm to undertake the work in time.

Injia, who has already managed to have the enquiry budget increased and the length of the investigation doubled to six months, said that he hoped that public hearings into the matter will now proceed. The government subsequently sold the 10% stake in Oil Search when its finances were hit by low oil and gas prices, but the financial terms of the sale have not been published. 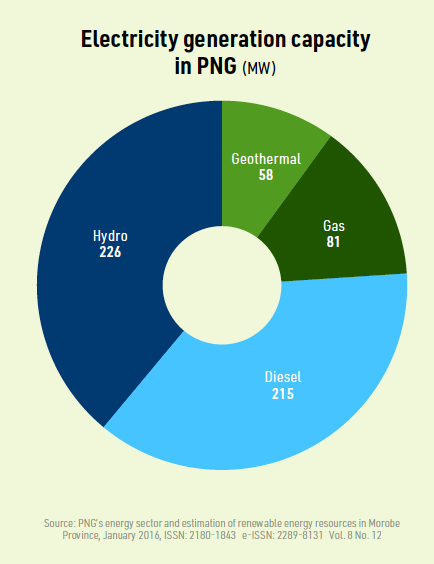 The established LNG project, PNG LNG, cost $19bn to develop and came on stream in 2014, several months ahead of schedule. It mainly ships LNG to Osaka Gas and the Tokyo Electric Power Company in Japan, Sinopec in China and Taiwan’s CPC Corporation.

ExxonMobil had sought to identify sufficient gas reserves in the country to justify an export project since the late 1990s. It originally hoped to pipe gas 3,000km from Papua New Guinea’s Southern Highlands to Australia, but abandoned this idea in 2007 and concentrated on investigating the possibility of an LNG scheme.

PNG LNG is the biggest ever private sector investment in the country and generates income for the state in the form of tax revenue and the dividends paid to Kumul Petroleum Holdings. Kumul is owned by the state-owned National Petroleum Company of PNG (Kroton), while Mineral Resources Development Company – also owned by the government – represents landowner equity interests in both the mining and hydrocarbon sectors.

The plant’s two trains were originally developed to produce 6.9mn mt/yr, but improvements have increased this to 8.3mn mt/yr and actual production has reached 9mn mt/yr, well above nameplate capacity. Output fell to 8.3mn mt/yr in the third quarter of this year because of damage to one of the six mooring chains at the offshore liquids loading facility, according to Oil Search.

Gas is produced on eight wells at Hides in Hela Province, where gas, condensate and water are separated and treated before the gas is transported via a 697km 36-inch pipeline to the LNG plant at Caution Bay, 20km northwest of Port Moresby, on the south coast of Central Province. The pipeline runs for 290km onshore and then 407km offshore, avoiding difficult mountainous terrain, sites of cultural importance, coral reefs and existing oil export facilities in the process.

The plant consumes about 1bn ft3 of natural gas a day and the consortium expects to produce 11 trillion ft3 over the course of the project. There are two 160,000 m3 LNG storage tanks at the Caution Bay site, which also ships about 30,000 b/d of condensate. PNG LNG has its own fleet of four LNG carriers operated by Mitsui O.S.K Lines, with storage capacities ranging from 169,000 m3 to 175,000 m3, although the LNG terminal has been designed to service vessels of up to 215,000 m3.

Kua has told the Papua LNG consortium that the new project must deliver greater benefits for the government and the country than the first two trains at the project site, although he has not specified what these increased benefits should be.

Ensuring that affected communities benefitted directly from PNG LNG was essential to the government sanctioning the project in the first instance. The Papua LNG investors point to the economic benefits of the existing plant, where 86% of the workforce of 3,200 is Papua New Guinean, including 200 operations and maintenance technicians.

Domestic gas-fired power generation also helps to fulfil the consortium’s pledge to ensure that the project benefits the wider PNG economy and social development. Some gas from the project is piped to a small gas-fired power plant in Port Moresby, with more gas to be supplied to a 58 MW power plant currently under construction. Additional gas production capacity has been reserved for a third power plant, at Hides itself.

Payments to local landowners and governments are governed by the PNG LNG project Umbrella Benefits Sharing Agreement (UBSA). Agreements were put in place from the start setting out how the payments concerned would be spent by landowners.

The Ministry for Petroleum and Energy only issued the required petroleum development licenses, a pipeline license and a petroleum processing facility license to PNG LNG once the package of benefits had been agreed. The existing UBSA payments, which will presumably be increased once Papua LNG is sanctioned and the project site’s production capacity is doubled, incorporate:

Agreements such as the UBSA are vital in a country where other natural resource projects have been blocked over land disputes and inter-communal violence. Fighting in July in Hela Province, where the gas fields are located, left at least 24 people dead.

There are some parallels between PNG LNG and the situation in nearby Timor-Leste, where the government and investors disagreed over whether to pipe gas from the offshore Greater Sunrise fields north to Timor-Leste for liquefaction or south to Australia.

The governments of both Timor-Leste and Papua New Guinea were keen on domestic liquefaction because of the industrial development that LNG schemes bring. However, Dili’s insistence on domestic liquefaction has seen most of the original Greater Sunrise investors pull out of the project, leaving it to try to secure the required investment on its own.

However, the big difference between the PNG LNG and Greater Sunrise projects is that the gas reserves on the former are located onshore and far closer to the site of the proposed Papuan LNG plant than to the Australian coast.

By contrast, the Greater Sunrise fields lie in the Timor Sea between Timor-Leste and Australia. The case for piping gas to Australia was also stronger in the case of the Timorese gas because it could be liquefied at the established Darwin LNG plant, which faces falling reserves on its existing source of feedstock – the Bayu Undan project, also in Timorese waters. No such option was available for the PNG gas.

Papua LNG yet to reach take-off