Late 2019 is not a good time to be considering a final investment decision for a world-scale LNG export terminal. On top of the endless flow of low-cost gas projects planned in the US and Russia comes news from Qatar of another two mega-trains in the latter half of the 2020s. Buyers have never had to be courted so assiduously. They want short contracts, gas hub price indexation or some hybrid that excludes Brent crude and full redelivery rights. To get projects over the line, builders have to shoulder more of the risk than ever.

And on top of the usual market problems – no buyer means no project, as Pieridae Energy’s CEO Alfred Sorensen puts it – there are also problems peculiar to Canada. Some are related to the rights of the First Nations. Without their support, projects are doomed. And others stem from the shifting politics and the resistance to pipelines and the fossil fuels they carry. 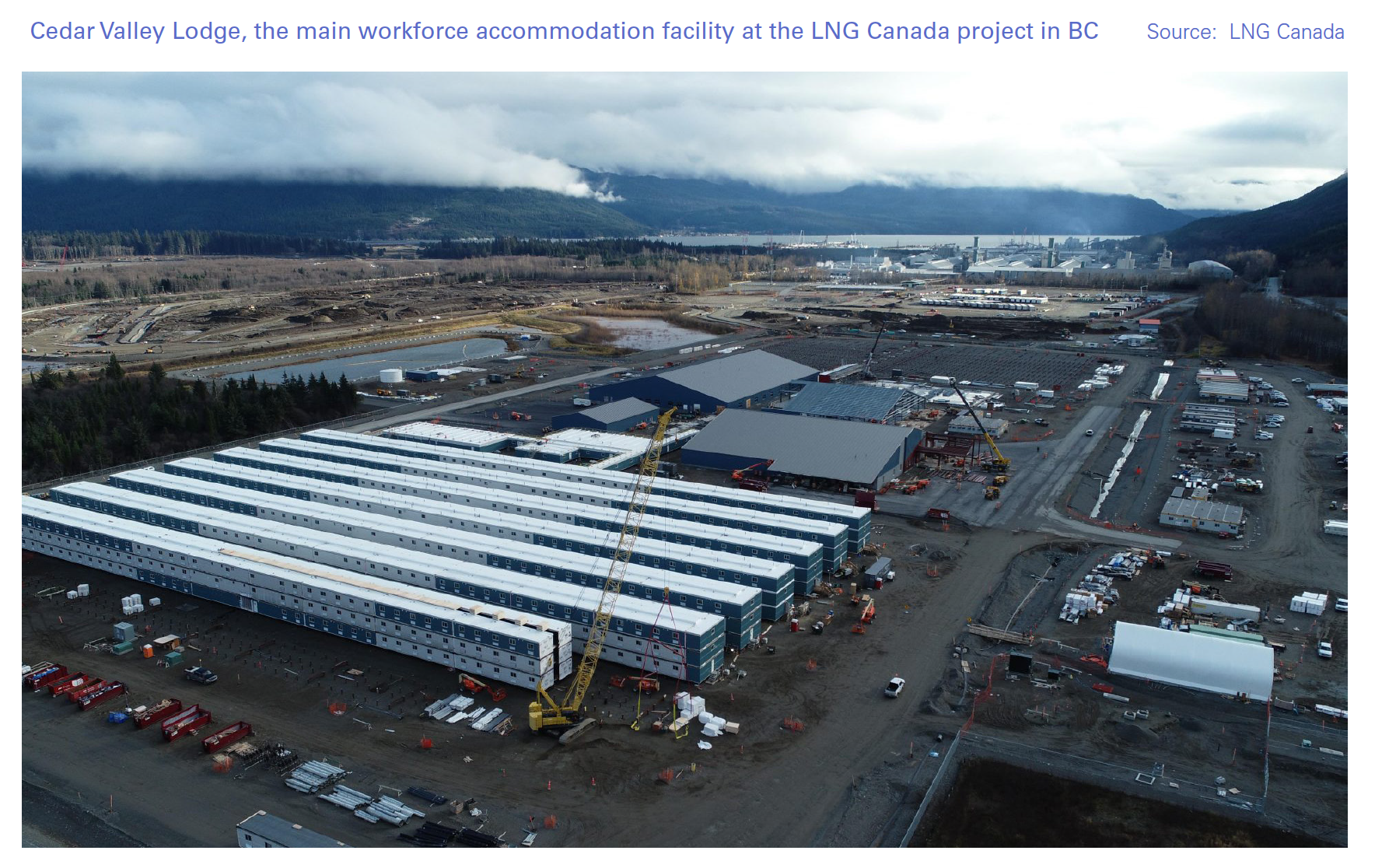 LNG Canada, the only project so far with FID, is running its liquefaction trains partially on hydropower to reduce the carbon footprint. This was just one of the many hurdles the project had to clear on its seven-year journey to FID, but one that could prove a blessing. Company spokeswoman Susannah Pierce told an event in London hosted by the Canadian High Commission that key to the success was all the partners’ determination, starting with the cost reductions. Phase II will come in time, she said, but at the moment it is a 14mn mt/yr project, bringing gas 670-km from the Montney shale through 20 First Nations’ territories.

The project will spend as much as possible on a ‘Canada first’ hiring policy. Of the C$2bn spent so far, much has gone to First Nations businesses, and between 10% and 15% of the staff are First Nation, and many from British Columbia.

First Nations LNG Alliance chief Karen Ogen-Toews said that in the case of the smaller Woodfibre LNG project, the Squamish were the de facto regulators, which was an indication of how much progress has been made in regard to their rights. But she said there was still more work to be done in order to lift the indigenous population to the standard of living enjoyed by the rest of Canada’s population – what she called economic reconciliation – and she worried that the recently-elected minority federal government led by prime minister Justin Trudeau might stall. 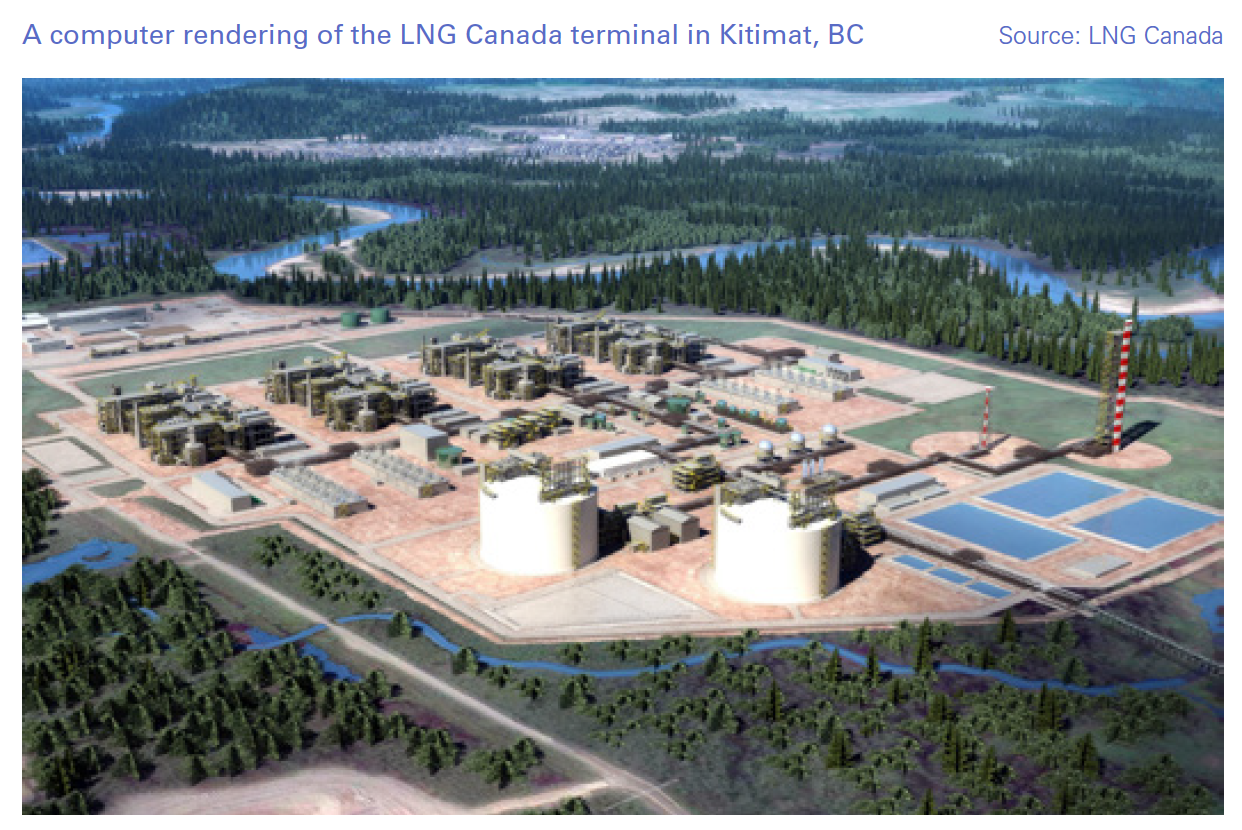 Canada benefits from a seemingly transparent and predictable regulatory landscape, which is not the case of some other, non-OECD host nations. But that does not mean that the odds are stacked in favour of the investor against the non-governmental organisations pursuing an anti-fossil-fuel agenda.

The provincial and federal governments have to tread carefully, weighing up the cost and benefits of their respective tax regimes. “We do not want to be a net contributor to the problem by making the tax burden too heavy that it stops small projects from going ahead. That would prevent the benefits of LNG being enjoyed elsewhere,” said Grant Sprague, representing the government of Alberta’s energy ministry. Although a long way from either coast, he said Alberta “supports LNG wherever it is in the country.”

He also reminded the audience that Canada is the world’s fifth largest producer, it has an incredible natural gas resource, and it needs to bring that resource to consumers. “We also have an incredibly competent regulator so our production meets all the environmental, social and governance (ESG) standards and a good, sound policy to ensure we continue to produce gas,” he said.

Sean Tupper, representing the federal government, said Canada was a good place for LNG: it offers 40-year export licences; it has the lowest corporation tax of any of the G7 countries; uniquely it has free trade agreements with the other G7 countries; and it is revamping and simplifying the regulatory process. “We have the policy infrastructure as well as the physical infrastructure and the ability to get the job done.” And provincial fiscal systems can complement those of the federal government, said Sprague. “There are large differences between the regions but the goal should be the same: to make the climate better.”

While the First Nations and NGO obstacles are not to be discounted, and there is a problem with being the last to the feast, there are also some strong advantages inherent in Canadian LNG. Canada’s east and west coasts are both closer to major European and Asian markets respectively, and there is no canal to queue up to pay to go through. Shorter journey times are going to become more important when and if carbon emissions are factored in.

Cameron Gingrich of benchmarking firm Solomon Associates said that not only does the lower ambient temperature in Canada boost the liquefaction plants’ efficiency by 10%-15% – a benefit also enjoyed by Russian projects in the Arctic and to a lesser extent at Sakhalin – but that also the ESG element of Canadian LNG reduced the investment risk: “It is a more sustainable value-chain,” he said.

After the US, Europe holds the world’s biggest accumulation of free capital; but there, investors have been caught out by the rapid rise of ESG up the agenda. Patrick Agar, managing director of gas at London’s mergers and acquisitions broker Lambert Energy Advisory, said: “ESG has gone from being a differentiating element to the core of what companies must do.”

If you compare Canadian LNG with other LNG, such as Gulf Coast, then Canada has a good potential, he said. Flaring, leaks and so on are rife in some shale plays, while the Montney can excel if it maintains the high standards; if the terminals can use renewable electricity, such as hydro for the liquefaction – the most energy-intensive part of the business.

On methane – the most potent, although short-lived, greenhouse gas – Canada is already taking a leadership position, according to discussions at a Canadian forum the day before the London event. Federal government regulations targeting a 45% reduction in methane emissions by 2025 kick in on January 1, 2020, and speakers at a forum in the Alberta ski resort of Banff hosted by Petroleum Technology Alliance Canada (PTAC) suggested the oil and gas industry will meet the target, based on voluntary programs that are already in place.

Wayne Hillier, Alberta manager for the Canadian Association of Petroleum Producers, which represents more than 80% of Canada’s oil and gas production, said: “We pull this off and it’s all about leadership. There is no other jurisdiction in the world that’s doing what we’re doing in oil and gas in western Canada right now. That’s global leadership.”

With the lowest carbon content of any LNG in the world, any carbon penalty placed on global gas trades will stand Canadian LNG in good stead amongst most global producers. And if there were to be an import tax on carbon in the EU, it would have to take account of all the carbon emissions, from the wellhead to the delivery point, said Lambert Energy’s Agar. As ships change hands and destination ever more frequently on the water, identifying which cargo has come from which terminal and what tax is applicable should be feasible as technology improves.

Taking their cue from European governments, investors have become more sceptical about oil, gas and coal. Even the Norwegian sovereign wealth fund has called it a day. The decision by the European Investment Bank mid-November to limit the amount of funding for fossil fuel projects is consistent with the EU’s more aggressive position. The new head of the European Central Bank, Christine Lagarde, also has ambitions to green up financing, planning to put climate change at the heart of the bank’s monetary policy.

But while the EU is a global standard-setter for cutting emissions – some of which have only been exported – it is not clear that the rest of the world can afford to be so focused. And Lagarde might fail to persuade some eurozone banks that climate is a national issue.

Hydro is not a solution everywhere and Nova Scotia has none available to run its liquefaction facilities; nevertheless there is political support in Germany for Pieridae’s Goldboro terminal. Berlin has underwritten $4.5bn of financing for the project, a third of which is for the upstream side – the Canadian gas acquired by Pieridae through a just-closed deal with Anglo-Dutch major Shell’s Canadian subsidiary is a conventional resource. 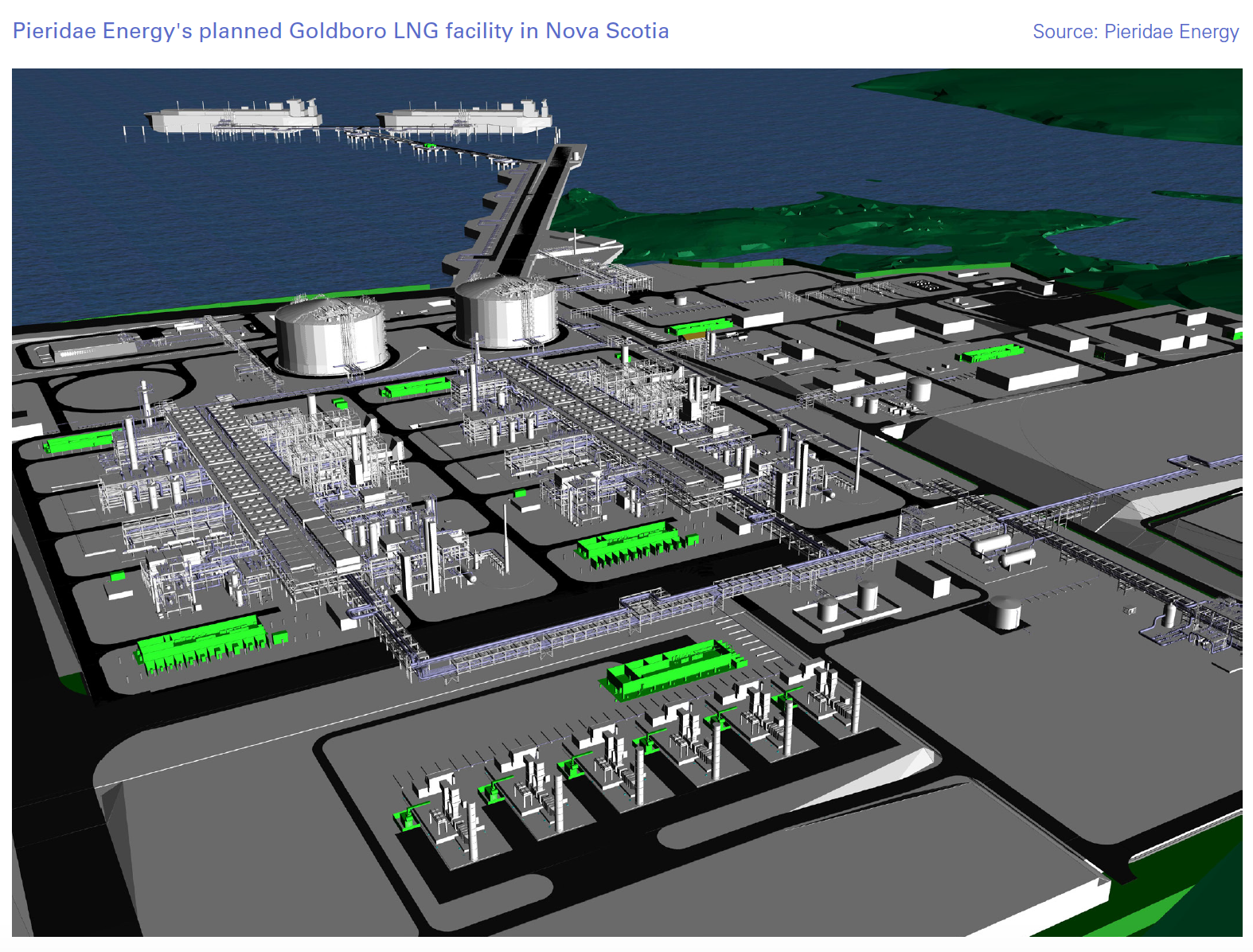 It’s not fracked gas, as much of the feed gas for US LNG projects is, and so meets a key requirement of the German financing guarantees; and it also represents an alternative to Russian gas. Whether or not to appease the US president, Donald Trump, Germany’s Angela Merkel has embarked on an LNG import strategy, with two terminals planned but not financed directly by the government.

Uniper brought the financing package to Pieridae. But, Sorensen said, “We have not done a good enough job selling to our own country, Canada has problems getting things across the finishing line. The first thing was to own the upstream; and the second was to sign up customers. No customers means no project.”

Managing the cost risk is key: that means owning the upstream. An innovative deal with Shell allows Pieridae to escape some of the heavier upstream abandonment costs. Sorensen said that Shell has some of the liability but his company is not expecting to abandon any wells in the near future. This is still a few years off, as they reach the end of their lives early next decade.

Join us for Canadian Gas Dialogues 2020. The Canadian Gas Dialogues conference is designed to bring together the spectrum of stakeholders in the natural gas community for the exchange and sharing of insight and viewpoints on how we can collectively move forward the position of the industry in local, national and global communities.