Oil prices and the US LNG juggernaut [LNG Condensed]

According to a Reuters report, LNG bagged a 14% share of the European gas market in the period October 2018 to August 2019, up from 5% in the same period a year earlier. Gas Infrastructure Europe reports that gas storage in Europe was 89.65% full as of August 20, with storage in Austria, Belgium, the Czech Republic, Denmark, France, Germany and the Netherlands over 90%. European gas prices reached a 10-year low in July … yet still the LNG comes.

Despite general European antipathy towards hydraulic fracturing, it is ‘fracking’ which has delivered this tsunami of cheap gas. In doing so, it addresses a fundamental long-standing driver of European energy policy – the fear that as European domestic gas production falls, Europe will become ever more dependent on the few major pipeline exporters that provide the majority of its imported gas supplies -- with Russia to the fore.

That concern now looks much less severe thanks to US LNG, largely derived from shale drilling. The EIA reported that the US last year saw one of the largest absolute increases in oil and gas production from a single country in history.

What is truly astonishing about the US gas story is how it appears to defy economic logic. As demand for a commodity rises, so too should the price. 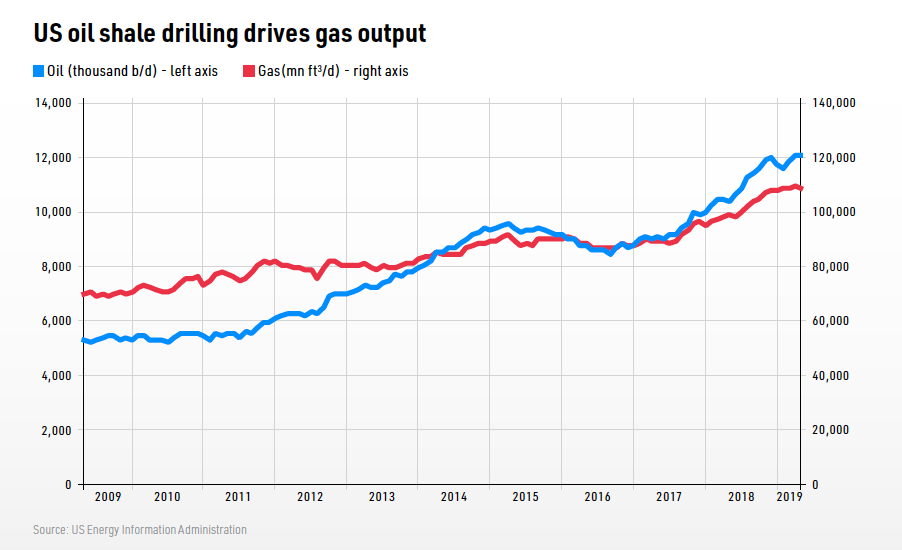 And demand has risen. US gas exports to Mexico increased more than five fold between May 2009 and May 2019 to 152,117mn ft3. Exports to Canada were up 52% over the same period, while imports of Canadian gas to the US have dropped by 3.7%.

Yet over this extraordinary period of demand expansion, prices have trended down. The average monthly price for natural gas at Henry Hub in July was just $2.37/mn Btu. Places, such as the Permian basin, where production has overtaken takeaway infrastructure have seen even lower values, and, on occasion, negative ones.

Demand has not led US upstream gas investment, it has followed it, and the reason for this is oil. 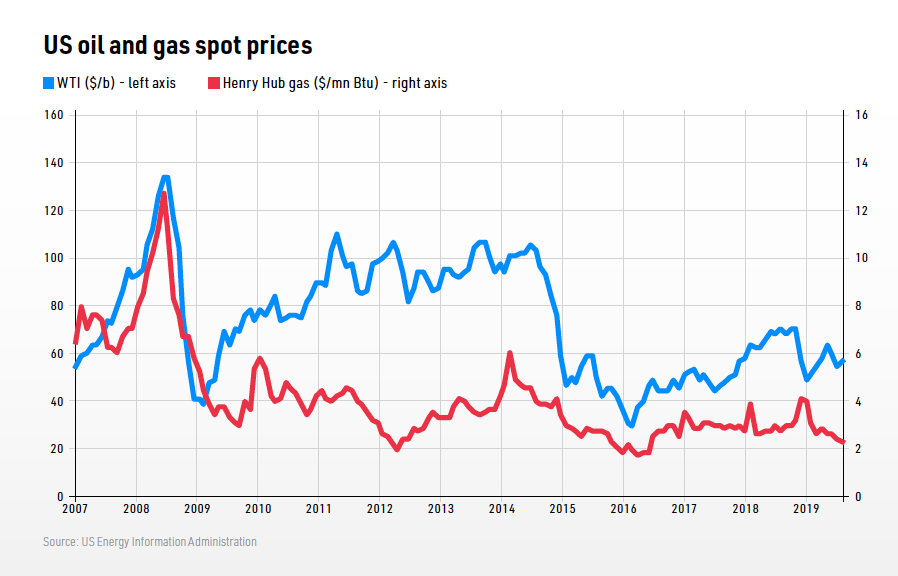 Shale wells generally produce a mix of liquids, condensates and gas. Over the last decade the proportion of US oil produced from shale wells has risen dramatically from near zero to 59% in 2018 – some 6.44mn b/d, according to EIA data. As a result, US oil and gas production have become more rather than less correlated.

US oil and gas production trended upward from 2011 to April 2015 as the shale revolution got into full swing. But towards the end of 2014, oil prices started to fall fast and by the beginning of 2015 were below $50/barrel for US benchmark West Texas Intermediate (WTI), roughly half the value a year earlier. The lagged impact of low prices had a quick impact on US shale oil production, which started to fall from April 2015 from 9.65mn b/d to 8.51mn b/d in September 2016 – a drop of 11.8%.

The impact on natural gas production was clear but not nearly so dramatic. Over the same period, gross withdrawal of gas fell from 92.0 trillion ft3/d to 87.5 trillion ft3/d, a decline of 4.9%. Both oil and gas production then started to rise in tandem to current levels.

This leads to three observations: that US gas production is driven in large part by the US oil price; that gas production is much less responsive than oil to price; and that shale production overall is much faster to react to changes in commodity prices than conventional oil and gas output.

Conventional production is driven by large projects with long lead times, without the flexibility of leaving wells drilled but uncompleted. Federal offshore Gulf of Mexico oil field production, for example, has risen steadily, but unspectacularly, year on year since 2013, largely as a result of investment decisions made in the period 2011-2014 when WTI averaged around $95/barrel. 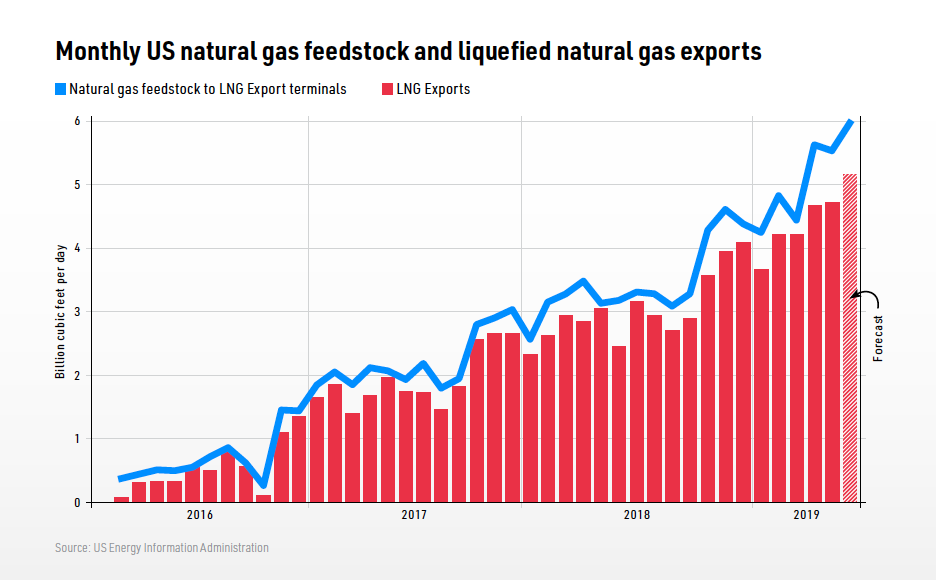 The implication is that the only thing that can unseat the US gas juggernaut is the oil market.

This is somewhat ironic in that the gas industry has for decades been trying to disassociate the price of gas from that of oil. There are plenty of reasons to do so.

Gas versus oil competition in the power and heating sectors has declined steadily. The evolution of traded gas markets in the US and Europe provide transparent prices for gas as a commodity in its own right where gas’ competitors are more often coal and increasingly power generated from renewable energy sources. The move away from oil indexation in gas contracts has meant gas prices are less affected by the complex geopolitics of the oil market.

However, this process of disassociation is not complete nor necessarily stable. Increased use of ethane from gas processing in the petrochemical sector now competes with the oil product naphtha as a feedstock, while refinery own use of natural gas has displaced former use of fuel oil and other oil products. Moreover, increasing use of gas in transport, as both Compressed Natural Gas and LNG, once again puts gas in direct competition with oil for market share.

The third area of new linkage is, as noted, US shale drilling, which underpins the expansion of US LNG production.

As a result, LNG observers need to keep a close eye on the oil market, where there is an impressive array of factors supportive of the oil price.

First, production curbs by the Opec plus group with Saudi Arabian overcompliance providing the back bone. Opec output in July was 29.88mn b/d, a five-year low.

Second, heightened tensions in the Middle East as a result of the threat to tanker traffic through the Strait of Hormuz, owing to the stand-off between the US and Iran over the latter’s nuclear programme and US sanctions. 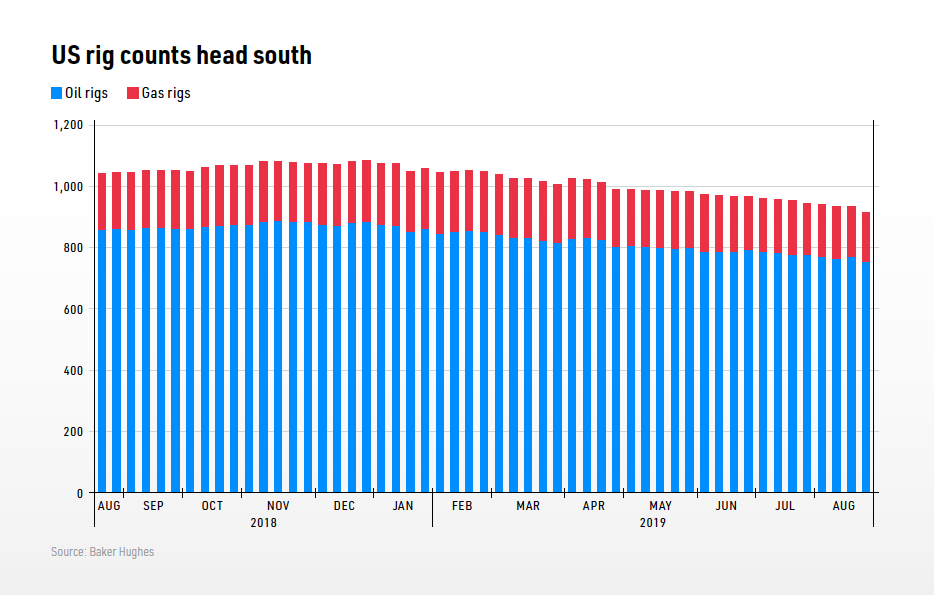 Third, two Opec producers are in a state of crisis. Mismanagement and economic collapse alongside US sanctions have crippled the Venezuelan oil sector and, although it has so far had only a relatively minor impact on oil production, civil war continues to rage in Libya.

However, these supportive factors are being outweighed by the multitude of economic indicators which suggest the world is on the brink of recession. The OECD’s Composite Leading Indicator stood at 99.06 in June having declined steadily for more than a year to the lowest level since the 2008/09 financial crisis.

Moreover, having started the year with expectations that the US-China trade war would be quickly resolved, the oil market has seen it go from bad to worse to worse still. All this bodes ill for global trade volumes which are a key determinant of oil demand.

In addition, on the supply side, while Opec is reining in production, new volumes coming to market in 2020 from non-Opec producers look robust. In its latest Short Term Energy Outlook, the EIA forecasts an increase in non-Opec oil supply of 2.24mn b/d for 2020, of which 1.54mn b/d will be from the US, while world demand will rise by only 1.43mn b/d.

These countervailing factors have seen Brent crude prices trend down towards $60/b in August from a high in April of $74/barrel, with the discount for WTI to Brent about $6/barrel.

There are already signs that the US oil patch is stalling. The US oil rig count – the number of rigs actively drilling for oil – had dropped from 877 at the beginning of the year to 754 on August 23.

US shale drillers are burning through cash and the number filing for Chapter 11 bankruptcy protection is rising. The lack of returns is closing off finance. A study by consultants Rystad Energy for the first three months of the year showed roughly 9 out of 10 US shale drillers were cash flow negative.

If a recessionary outlook is assumed, oil demand forecasts will continue to fall and with them oil prices and US shale drilling activity, which will worsen the financial stress already evident in the sector. If this turmoil results in a slowdown in oil production, it is likely to have a knock-on impact on US gas production similar to the last contraction in US shale drilling.

The US will then find itself in an unfamiliar position. Steadily rising demand for gas as long-lead time infrastructure – notably LNG plants – is completed, but a slowdown in production growth. This is likely to push gas prices higher.

Just as gas prices have fallen as oil prices rose, the reverse will go into effect, which would come as an unwelcome surprise both to US users of gas, but also their European counterparts who have this year become used to very low prices for imported US LNG.