Oil prices have fallen precipitously as Saudi Aramco draws other producers into a war of attrition. While it has low production costs, the part-floated behemoth needs a high oil price to balance the budget – $78.3/b according to the IMF. At time of press Brent crude was at $30.25/b, rising as governments worldwide pile on the economic stimuli.

The low price exposes small and mid-cap producers with the highest production costs – or the least ambitious hedging strategies – to the mounting threat of bankruptcy. The rising price of associated gas at the US Waha hub has mirrored the fall in the US West Texas Intermediate benchmark crude and shows producers have already responded by turning oil down. But it is still discounted against Henry Hub, even if now it costs above zero.

For the majors, such as the Anglo-Dutch Shell, this new outlook threatens their share buy-back and dividend plans; for the national oil companies, it could mean delays to social reforms and other expensive investments. Bucking the bearish trend though was Eni's CEO, Claudio Descalzi, who has just picked up company shares at half the price earlier in the year.

Low prices also make renewable energy less attractive financially; and dealing with the social problems – unemployment and so on – will probably take money that had been earmarked for more ambitious schemes such as Europe's Green Deal.

Russia – whose refusal to co-operate triggered the Saudi April output increase threat – is in a stronger position than its antagonist, requiring only around $40-45/b crude to balance the books. Indications are that the government has no intention of returning to the Opec+ negotiating table. The politically powerful Russian oil industry has generally welcomed Moscow's departure from the supply deal, none more so than its top producer Rosneft.

Russia's commitments under the Opec+ agreement have not prevented it from ramping up production over the years, partly because the base level for cuts was very high, and partly because producers simply exceeded their quotas. Even so, Rosneft and others have had to hold some projects back due to the restrictions (see graph). 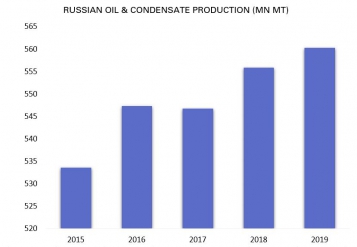 This is not to say Russia is immune to the downturn. The ruble has collapsed and the economy could slide back into recession. But even if Moscow were to back a new deal on supply cuts, it would do so only after securing additional, significant concessions from Saudi Arabia. This outcome could satisfy Russia's producers, while also allowing Saudi Arabia to save face.

Over the longer term, low prices will undermine Russian production growth by sapping investment in high-cost regions like the Arctic. The government has just introduced generous new tax breaks for Arctic gas producers, under a plan drawn up long before the price slump. This support is meaningless in such bearish market conditions.

Elsewhere, the impact on higher-cost basins, such as the UK, will be profound: companies planning acquisitions, such as Premier, will be wondering if it is wise to borrow even more cash, given the extent of the oil price drop since the negotiations with the sellers were concluded.

The UK continental shelf's productive life is at risk at these ultra-low prices, owing to possible breaks in the supply chain. Producers will pull back from uncommitted projects, or attempt to renegotiate existing agreements with their contractors. Drilling activity will fall away. Offshore industrial action will recur if worse terms are imposed on workers, although the threat of one, at Scotland's Sullom Voe oil terminal, has been averted.

In tandem with the falling oil price has been falling demand as the Covid-19 virus took hold, first in China and then in Europe. Now it is officially a pandemic, so governments world-wide have had to take drastic decisions about the health hazard it poses. Jetfuel demand is sharply down. In the absence of any useful comparable data, responses have ranged from non-intervention in some countries to virtual nation-wide house arrest with heavy policing in others.

The European Commission has adopted a temporary framework to enable countries to treat the state aid rules a little more creatively to support the economy. In the UK, competition rules have been relaxed to allow supermarkets to co-operate while the central bank has slashed May interest rates to virtually nothing.

Companies are also easing payment terms for retail energy – and more: for example in the UK, BP is offering free fuel to emergency vehicles and free deliveries of food for customers at least until the end of April.

But all industries, especially transport and oil and gas production, have been affected in some way. Sound Energy will have to wait for Moroccan restrictions to ease before it can bring a well-testing crew into the country, for example. And a Covid-19 case, apparently not a serious one, was diagnosed on an Equinor-operated Norwegian platform, Martin Linge, which has seen the workforce reduced.

This has produced much speculation about what the future will bring, based on what can be observed so far, but there is no consensus on how long the abnormal situation will last.

The Norwegian consultancy Rystad Energy, for example, has produced a range of gas demand reductions for Europe but all assume any lockdown is over by May. It does see European gas demand growth this year if only at a third of its earlier forecast of 6bn m³ more in 2020 than in 2019, reaching 556bn m³.

Rystad's most likely scenario assumes most of the continent’s countries go into lockdown for 30 days during the two-month period of March and April. As people stay home and businesses close their doors, demand will decrease for power generation and industry. The biggest hit in volume terms will be in Germany, Italy, the UK, France, the Netherlands and Spain. Spain, Germany and Italy have all made major switches towards gas for power generation.

The lockdown measures come at a time when European gas prices are already at a record low as a result of the abundant supplies available to the region, combined with lower demand due to the mild winter, and underground stock levels at historically high levels. As a result, it is an unattractive market for US LNG, although the US-North Asian premium was growing at time of press (see graph). 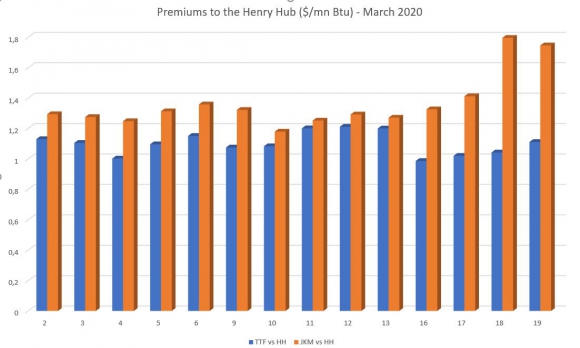 Rystad does not see room for lower prices in northwest Europe, as the prices are too low to support LNG exporters' short-run marginal costs: they would rather divert cargoes to other regions, such as Asia, or adjust down production, it says.

However, there is a risk of seeing prices drop to a level of $2.3/mn Btu for a short period of time while the necessary adjustments to balance the market occur.

In North America, conventional and shale-focused producers have made widespread cuts to 2020 capital budgets and more are expected as the depth of demand-destruction brought on by global Covid-19 measures grows more certain. Compounding the free-fall in demand is a supply glut brought on by the collapse of the Opec+ agreement, leading Russia and Saudi Arabia to flood the world market with oil.

But despite the collapse in gas prices, 16 LNG vessels (five from Sabine Pass, three from each Cameron, Corpus Christi, and Freeport, and two from Cove Point) with a combined LNG-carrying capacity of 59bn ft³ left the US between March 12 and 18, according to Marine Traffic data; this is more than the week before.

Most recently, ConocoPhillips on March 18 announced it would cut its 2020 capex budget by $700mn – or about 10% -- and reduce its planned share repurchase program for this year.

“Our industry is clearly experiencing an unprecedented event brought about by simultaneous supply and demand shocks,” CEO Ryan Lance said. “The actions we are now taking reflect an acknowledgment of current events as well as uncertainty around the timing and path of a recovery.”

On March 16, US super-major ExxonMobil warned that it was examining “significant” adjustments to its $33bn capital plan for 2020, but did not say when those moves would be made. Other major US producers – Chevron, Chesapeake Energy and independent Cabot Oil & Gas among them – were also thought to be reviewing 2020 expenditures in light of the market calamity underway.

Canadian companies also took steps this week to cut spending: Denver-based Ovintiv – which recently moved, as Encana, from its Calgary birthplace to attract more US capital – said it would cut 2Q 2020 capital investments by $300mn, while Calgary-based Pembina Pipeline, whose $10bn Jordan Cove LNG project won US regulatory approval on March 19, said it would cut spending this year by up to C$755mn ($521mn).

But not all of the news in North America was related to Covid-19 or the supply glut: activist investor Carl Icahn this week renewed his vow to oust Occidental Petroleum CEO Vicki Hollub and her entire board at the company’s annual meeting, expected in May.

Icahn, who increased his stake in Oxy to 10% earlier this month, called Occidental’s $57bn purchase of Anadarko Petroleum last year “one of the worst disasters in financial history” that ended up destroying $47bn of shareholder value.

In an effort to fend off Icahn, Occidental on March 13 adopted a poison pill that would give existing shareholders the right to acquire additional shares should anyone amass a 15% stake in the company.

In Asia Pacific, Papua New Guinea-focused Oil Search has cut its investments in 2020 by 38%. As a result, Oil Search expects its investment expenditure in 2020 to fall to $440-530mn, down from a previous guidance of $710-845mn. Capital spending for the year from April is forecast to drop to $200-300mn, from $400-500mn. Oil Search has a 29% stake in the $13bn PNG LNG expansion project operated by ExxonMobil and also involving France's Total.

Southeast Asia-focused Jadestone Energy has delayed plans to develop a pair of gas fields off the coast of southwest Vietnam, cutting its 2020 capital expenditure by around 50% to $80-95mn.

Wood Mackenzie believes oil price crash and the Covid-19 outbreak will lead to a cut in exploration spend in the Asia Pacific of up to $1bn from an expected level of $4.5bn this year. WoodMac Asia Pacific vice-chair, Gavin Thompson, said around 200 exploration wells were expected in the region in 2020 which now may fall by up to 30%.

A sustained period of low prices will delay most upstream final investment decisions in the region. The biggest blow will be felt in Australia where companies are aiming to sanction large, strategically important backfill LNG investments in 2020. Significant projects in southeast Asia will also be pushed back, Thompson said. Among those projects targeting FID in 2020, Australia's Scarborough, operated by Woodside, and Barossa, operated by Santos operated, account for 52% of unsanctioned spend and 48% of reserves.

However, in Australia Carnarvon Petroleum and Santos said they will proceed with the Dorado development work and focus on starting front end engineering and design (Feed) as planned despite the market turmoil. The Dorado oil and gas field, one of the biggest finds off Australia in recent years with 283mn barrels of oil equivalent proven and contingent resources, is in permit WA-437-P offshore Western Australia. Carnarvon, the discoverer, holds a 20% interest while the rest 80% is held by Santos (operator).