Last year was the third best year on record for free cash flow, which totalled $89.2bn, despite marking a decline from 2018.

“This shows that the cash flow situation for offshore players is very robust, underlining the point that E&Ps have enough cash in hand to invest in new projects after several years of restrained capital expenditure,” Rystad said. 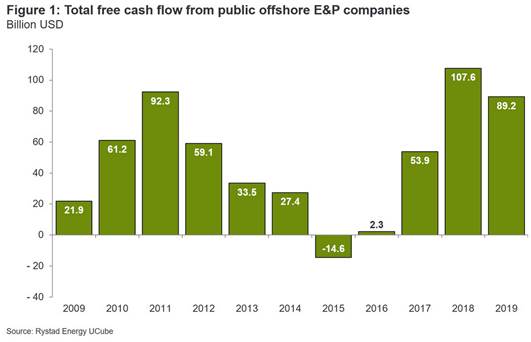 The resources approved for development last year included 12.3bn boe of liquids and 8.3bn boe of gas, bringing the total to 20.6bn boe – the largest volume of resources sanctioned for exploitation since 2011 and up 110% from 2018. The replacement ratio for both oil and gas resources was 1.2. 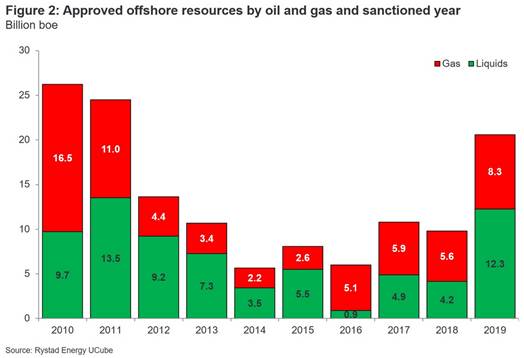 The value of greenfield investment approvals also soared 50% last year to $92.3bn, on the back of major developments like the Marjan and Berri expansion projects in Saudi Arabia being cleared.

While the sum of investment approvals was much higher in the 2010-2014 cycle, costs were also significantly higher back then, Rystad said. 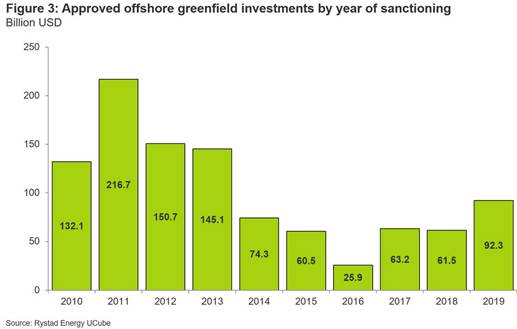 Marjan was by far the largest project to be approved in 2019, valued at close to $12bn. In second place was the Area 1 LNG project off Mozambique, followed by Berri and the Anchor oil project in the US Gulf of Mexico. 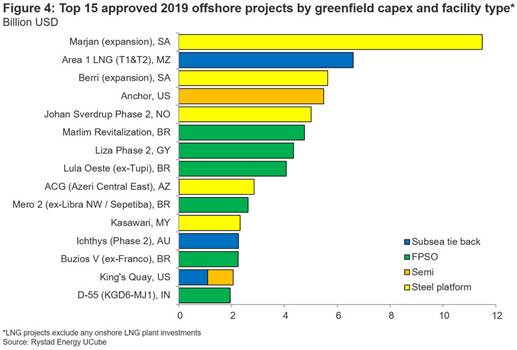 Thanks to the wave of new approvals, offshore capital expenditure grew 5% in 2019, with deepwater spending up 7% and continental shelf investment up 3%. Rystad projected that offshore investments would climb 8% in 2020, driven by a 12% surge in deepwater expenditure, while growth in shelf spending slows to 2%. “This illustrates that a new offshore investment cycle is in the making,” the research group said.