Canada’s natural gas industry has been on life-support for the past few years. First, it was hammered by the shale gas boom in the US that has effectively stripped it of its historical customer. Now it is hand-cuffed by a flawed regulatory system that makes it nearly impossible to get infrastructure projects built on time. 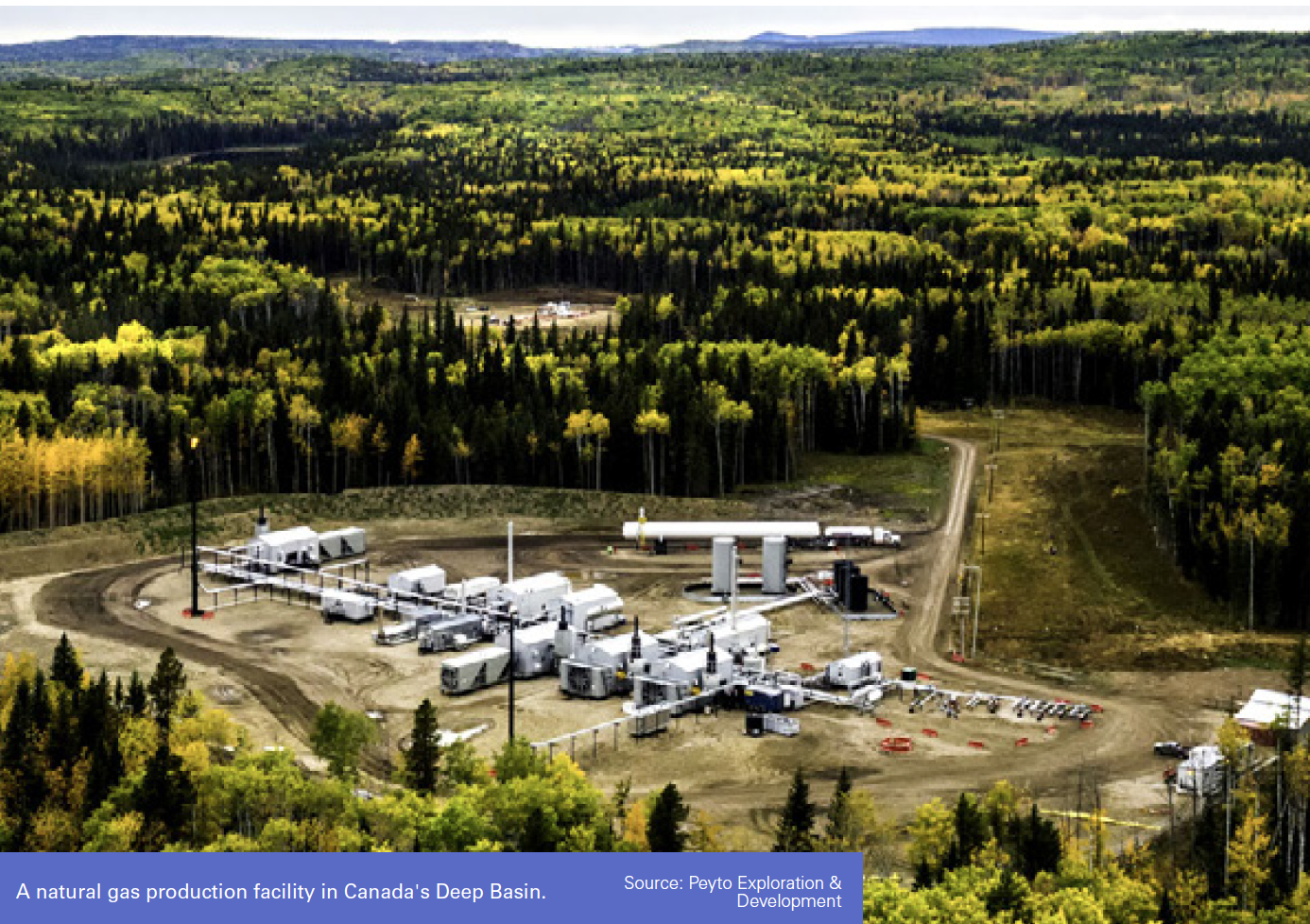 In late April, privately-held junior producer Trident Exploration took itself off that life-support, closing its Calgary headquarters, laying off 33 employees and 61 contractors and walking away from more than 3,300 active wells – many of them conventional gas or coal bed methane – nearly 300 abandoned wells and more than 200 operating facilities. Its board of directors also resigned, effectively transferring control of its assets to the Alberta Energy Regulator (AER).

The last straw came earlier this year when the Supreme Court of Canada, in its so-called Redwater decision, ruled that struggling companies cannot escape their abandonment and reclamation obligations by declaring bankruptcy. Instead, those costs must be covered before any remaining assets can be sold to pay creditors.

Trident’s abandonment and reclamation obligations have been estimated at some C$329mn, and despite recent successful efforts to restructure its debt and prepare for an orderly sale of its assets, it was unable to get the AER to support a restructuring.

“Ultimately, the recent Redwater decision, regulatory uncertainty and a lack of egress has created a treacherous environment for energy investors that dare to risk their capital in Canada,” Trident said. “The Redwater decision has had the unintended consequence of intensifying Trident’s financial distress and accelerating unfunded abandoned well obligations.”

Days later, Alberta’s Orphan Well Association (OWA), a non-profit organisation funded by the energy industry to address abandonment and reclamation obligations, took the unprecedented step of asking the court to appoint a receiver to ensure Trident’s wells are properly cared for, maintained or shut-in, as required.

“This is an unprecedented step for the OWA as normally the company or its creditors would clean up its sites or appoint an insolvency professional to help transition the licensed assets, where possible, to other parties,” the OWA said. “In this case, the OWA has no other choice but to take this step to ensure that Trident’s assets are managed and maintained safely for the benefit of the public, and where possible, placed in the hands of responsible operators.”

PricewaterhouseCoopers was subsequently appointed Trident’s receiver by the Court of Queen’s Bench of Alberta.

Darren Gee, CEO of Deep Basin producer Peyto Exploration & Development, says the Trident experience is likely a sign of things to come, especially for producers active in the dry gas and coal bed methane regions of eastern and southern Alberta.

In recent meetings between the gas industry and Alberta’s energy ministry, Trident and other dry gas producers warned that well abandonments were likely to increase if problems at the AECO trading hub which suppressed prices there – the inability to move gas to storage and the lack of available pipeline capacity out of the Western Canadian Sedimentary Basin (WCSB) – were not addressed.

“Well, nothing was done to fix AECO so there you have it,” Gee told NGW. “I suppose in some ways, shuttering all the dry gas in the province will fix AECO, but at what cost? That’s a lot of well abandonments that shouldn’t have to happen.”

Those dry gas and coal bed methane reserves, he said, are perfectly suited to replacing coal in Alberta power generating facilities, and could even be used to underpin the development of small-scale LNG facilities to serve transportation markets in western Canada. “There are all kinds of better solutions,” Gee said.

Other major western Canadian gas producers, in 1Q 2019 earnings statements, noted some of the same constraints that drove Trident from the Canadian gas landscape – but also showed there are ways to mitigate the price weakness at the AECO hub.

Patrick Ward, CEO of Painted Pony Energy, noted that cold weather through the early months of this year helped support western Canadian prices, while its own initiatives to diversify its gas marketing away from AECO – including a 14-year deal to supply fixed-price gas to the Methanex methanol plant in Medicine Hat – helped propel its realised gas prices through the first quarter to a 24% premium over the AECO spot price.

“Discussions are ongoing with a number of large end-users of natural gas, including utilities, petrochemical manufacturers, and LNG exporters, as we pursue additional long-term supply agreements, similar to our 14-year supply contract with Methanex,” Ward said. “We believe our portfolio of fixed-price contracts and diversified market exposure will mitigate the impact of short-term local pricing.”

At the same time, he added, TC Energy (formerly TransCanada) appears to be making some headway in its efforts to increase take-away capacity from the WCSB, which should lead to long-term gains for producers even if it brings short-term pain as construction-related pipeline restrictions continue through the summer. 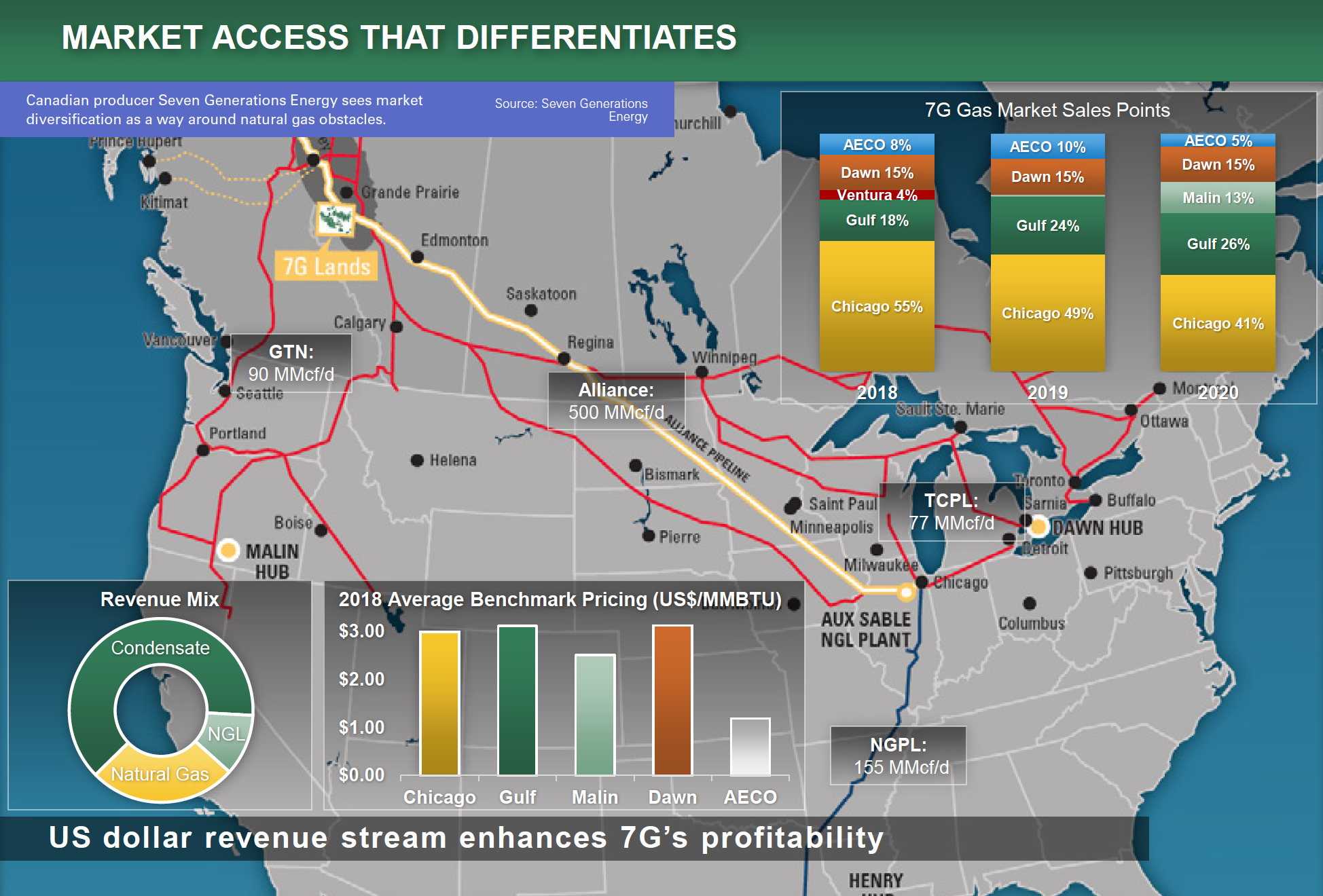 Seven Generations Energy (7G), which has a strong production position in the Alberta portion of the giant Montney field, is also looking beyond AECO to bolster its price realisations. In the first quarter this year it was able to secure an additional 55mn ft³/day of market access from the US Midwest to the Gulf Coast, adding to the 100mn ft³/day it was already marketing through Henry Hub, and is now able to sell nearly one-third of its total Montney production directly into global LNG markets served by Gulf Coast liquefaction facilities.

Bonavista Energy is also looking to the LNG market for relief from depressed western Canadian gas prices, which it said have lagged the North American benchmark Nymex by as much as 70% over the last six months. 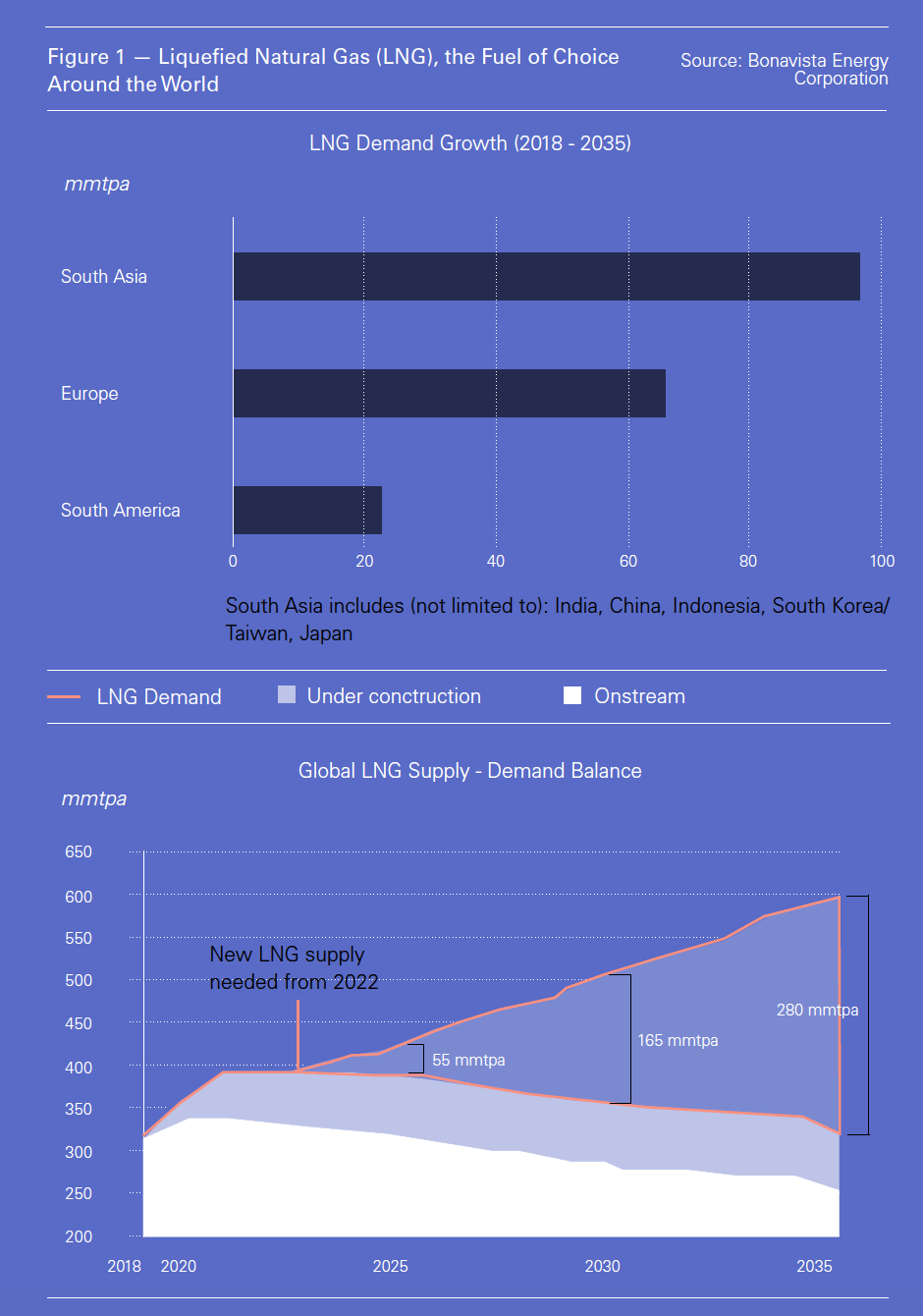 Taking note of robust global LNG demand projections, Bonavista said that North America, by virtue of its close proximity to Asian markets, “will undoubtedly” play a role in meeting this demand, and that Canada, with the fourth largest gas reserves in the world, has an opportunity to participate – assuming it gets its own house in order.

“With LNG facilities on Canada’s west coast being closer than any other North American LNG source, there is a window of opportunity emerging,” the company said, releasing its 1Q 2019 results. “This global opportunity is real, and this demand will undeniably get met with production from another jurisdiction if Canada cannot find a way to create a stable and competitive fiscal environment with regulatory efficiency and excellence.”

LNG Canada’s final investment decision last October for the first 14mn mt/yr of liquefaction capacity at Kitimat, on BC’s northern coast, represents a good first step towards that goal, Bonavista said. But a fractured regulatory system is blocking the timely and cost-efficient completion of other LNG projects which could bring tangible benefits to producers and governments alike.

“LNG created in Canada presents both economic prosperity and global emission reduction provided the most robust and thoughtful energy policies are pursued by our federal and provincial governments,” Bonavista said. “With a deliberate goal to become the most responsible and efficient provider of energy, Canada can be the natural gas provider of choice for many countries in need.”