The company’s investment case is mainly its low costs and firm growth trajectory. Its stock price rose steadily in the years before the coronavirus pandemic, peaking at £21.4 ($29.4)/share in October 2019. Investors were heartened by the speedy and on-budget completion of Yamal LNG’s first three trains between late 2017 and late 2018, as well as Novatek’s final investment decision on Arctic LNG-2 in September 2019.

Novatek’s share price as of January 27 is £18.2/share, which is roughly the same as it was a year ago, when the coronavirus was still largely contained in China. This is an impressive feat in the oil and gas industry, with many companies’ stock still trading at a significant discount to the pre-coronavirus level.

The company’s profits may have taken a hit last year, with pre-tax earnings (Ebitda) down 30% in the first nine months of the year. But it also paid out a bigger share of its income, up from 30% to 50%, while expanding production further.

Profits and the promise of growth are no longer enough in the eyes of investors, however. Oil and gas companies now face heightened scrutiny over their environmental policies, and Novatek has risen to this challenge. 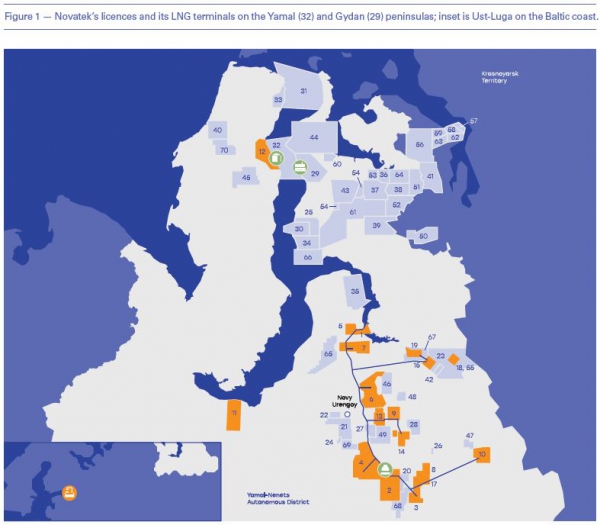 Novatek announced a number of new 2030 climate goals last August, on the back of a number of European gas firms making similar bold promises. It is targeting a 4% reduction in methane emissions across its production, processing and LNG activities, from 10.44 metric tons/mn barrels of oil equivalent in 2019.

It also wants to reduce air pollutant emissions by 20% and greenhouse gas emissions from its upstream operations by 6% and from its LNG by 5%. Meanwhile, it is striving to boost its utilisation of associated petroleum gas (APG) to 99% from 95% at present.

The company has also unveiled a raft of new decarbonisation projects, including a scheme to produce hydrogen from natural gas at Yamal LNG. In partnership with Germany’s Siemens, it plans to run one of the project’s 47-MW gas turbines on mostly hydrogen. These build on its earlier decision to build the second project using a gravity-based system, which it says has less impact on the environment.

Novatek has been rewarded for its efforts. Its environmental, social and governance (ESG) score was upgraded late last year by financial firm MSCI from BBB to A, making it the highest-scoring Russian hydrocarbon player. In contrast, its counterparts Gazprom and Lukoil still have BBB ratings, while Rosneft is rated BB.

"It is unclear what the trigger for the upgrade was, but we know Novatek has been working diligently to improve its ESG score, as have, for that matter, other Russian oil and gas companies such as Rosneft, Lukoil and Gazprom," Moscow brokerage BCS Global Markets said in a research note in December. "As a gas company with peer-leading reporting practices, Novatek was already likely to screen well with portfolio managers, which we understand are increasingly under pressure from their own clients to show they are investing with ESG scores in mind. Receiving this upgrade should only confirm its attractiveness on these measures."

Gas is inherently cleaner than oil, giving Novatek an edge over some of its Russian counterparts. Rosneft and Tatneft, in contrast, have a much tougher challenge given the high-sulphur oil they produce in the Urals area.

And as a gas company with assets all concentrated in clusters in northwest Siberia, Novatek also has an easier job using its APG. In contrast to its 95%, oil-focused Rosneft used only 89.3% of its gas last year. Interestingly, Gazprom performs even worse, with a rate of only 89%.

Another natural advantage is the fact that Novatek’s assets are mostly modern and environmentally cleaner, whereas others like Gazprom and Rosneft also operate a lot of inherited Soviet-era oil and gas infrastructure.

It pays to advertise

Appearance is key, and Novatek has publicised its environmental work at every opportunity. In January, it announced signing a memorandum with Russian steelworks NLMK, one of its largest customers in Russia, on co-operating to reduce greenhouse gas emissions. The pair have discussed using carbon capture, use and storage, hydrogen and developing other low-carbon technologies to achieve this end.

A month earlier, Novatek said it had opened Europe’s first carbon-neutral LNG refuelling station for vehicles in Rostock on Germany’s Baltic coast. Its emissions will be offset by wind farms and other means.

Novatek and many other Russian oil and gas companies also publish extensive sustainability reports, in some cases far exceeding those of Western companies in length.

“You have to be seen as trying, that’s one of the big check marks,” BCS GM analyst Ronald Smith told NGW. “It’s eye-opening how the ESG hurdles are coming to dominate the decision-making process among investors.”

By failing to keep up with the energy transition, oil and gas companies also risk downgrades to their credit ratings. Ratings agency S&P Global warned 13 firms on January 26 that it might slash some of their scores because of rising competition from renewable energy. Chevron, ConocoPhillips, ExxonMobil, Shell and Total were on the list, although Total announced the week before that it had resigned from the American Petroleum Institute.

CEO Patrick Pouyanne said: “We are committed to ensuring, in a transparent manner, that the industry associations of which we are a member adopt positions and messages that are aligned with those of the group in the fight against climate change."

Novatek may genuinely be looking to explore hydrogen’s potential in order to secure an early position in a potential hydrogen economy in Europe, Dmitry Marinchenko of Fitch Ratings tells NGW. The make-up of the world’s future energy mix looks increasingly uncertain, so some gas companies are hedging their bets by investing in hydrogen.

Gazprom too is researching natural gas-derived hydrogen production, with an eye on potential exports to Europe in the future using its existing pipeline system. Russia is working on a national hydrogen strategy, which is expected to provide subsidies to projects that produce blue hydrogen and so-called yellow hydrogen, created from water using electrolysis, powered by nuclear energy.

Spain’s Repsol announced a plan in December 2019 to become a net-zero emissions company by 2050, leading to a flurry of similar announcements by many other European oil and gas companies. It is possible Novatek might also take this step, the analysts said, although they doubted if it were possible to achieve this if it keeps gas as its main product.